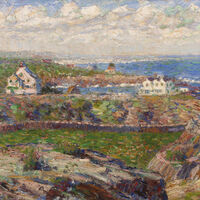 An early promoter of modern art in America, a founding member of the Association of American Painters and Sculptors, and the organizing force behind the iconic Armory Show of 1913, Walt Kuhn was unique, standing apart from the mainstream of American art. He started studying art at the Brooklyn Polytechnic Institute and ended up accepting a job as a cartoonist in 1899 in San Francisco for a political weekly magazine. Two years later, he traveled to Paris and then Munich to study art, returning to New York in 1903. When he helped initiate the Armory Show, he again traveled through Europe in search of works to exhibit. During this time, Kuhn gained massive exposure to the cubist and fauvist styles that were dominating his contemporary world. While art was becoming more abstract, Kuhn remained committed to representation. He did, however, incorporate fauvist color palettes into his own work and appreciate the tones used by artists like Cézanne. A skilled painter of still lifes, Kuhn is best remembered for his portraits, with depictions of circus and vaudeville entertainers amongst his most memorable. In the 1920s, he even designed and directed stage revues when they were at the height of their popularity.