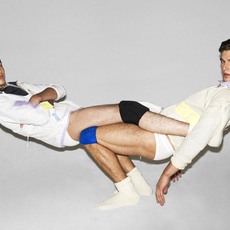 Walter Pfeiffer was born in Zurich, in 1946 and has been producing since the early 1970s. His portraits of friends, lovers and the youth surrounding him in cities such as Zurich, Paris and New York would link him to other photographers of that decade, such as Nan Goldin and Nobuyoshi Araki. His first book of photographs appeared in 1980, Walter Pfeiffer: 1970-1980 (Elke Betzel, 1980). The next two decades were spent in relative obscurity, while the photographer kept on producing his photography and a few videos, while at the same time returning to painting. The breakthrough and rediscovery of his work would have to wait until the beginning of the century, when Welcome Aboard, Photographs 1980-2000 (Edition Patrick Frey/Scab, 2001) was published. His work was then linked to the revival of realistic photography in the 1990s and early 2000s, with artists such as Wolfgang Tillmans, Ryan McGinley, Slava Mogutin, Heinz Peter Knes and Jack Pierson. His influence on the work of photographers like Juergen Teller has been noted. Since then, Walter Pfeiffer has collaborated with international magazines as diverse in style and audience as i-D, Butt and Vogue.