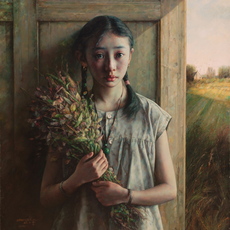 Zhao Kailin
One of the most important and critically acclaimed Chinese masters of contemporary realism working today, painter Zhao Kailin was born in 1961 in Bengbu in southeast China.
Zhao Kailin felt, even as a young child that he wanted to be an artist. "By the age of eight, I knew I wanted to be a painter," Zhao relates. "It was my second grade teacher in elementary school who taught me basic painting skills and encouraged and challenged me. Most important, she taught me how to soar with imaginary wings through the secret world of art." Under her tutelage, Zhao's painting abilities matured, so much so that his work began appearing in children's juried art exhibitions in Bengbu.
In 1988, Zhao Kailin was accepted for graduate studies at the prestigious oil painting department of Beijing's Central Academy of Fine Arts, China's most illustrious and rigorous fine arts institution. "From 1988 to 1990, I studied there and learned traditional western-style oil painting," states Zhao. "It was the most important period of art studies in my life."
During this period of intensive training, Zhao was exposed to the galvanizing portraits of Dutch Renaissance master Rembrandt (1606-1669) and was immediately taken with the work's luxuriant brushwork, jewel-like color and commanding manipulation of light and shadow inspired by Italian Renaissance painter Caravaggio (1573-1610). It was during this same time that Zhao also became enamored of the elegantly voluptuous society portraiture of American painter John Singer Sargent (1856-1925). Sargent's Madame X (1884), a full-figure portrait of a mysterious porcelain-skinned woman dressed in a long black dress that scandalized Paris's Salon of 1884, most certainly has left its silky mark on many of Zhao Kailin's portrait paintings.
More recently, Zhao's work has concentrated on depicting beautiful, introspective young women, most of whom are Asian and dressed in traditional Chinese attire. Several of the latest paintings