The Deutscher Werkbund (1907-1934) was a state-sponsored organization of German architects, craftspeople, designers, and businessmen who sought to define industrial, craft, and aesthetic standards for the nation, as well as integrate traditional crafts and industrial mass-production techniques to put Germany on a competitive footing with England and the United States. Originally, the Werkbund began at the instigation of Herman Muthesius, and other key members included Mies van der Rohe and Eliel Saarninen. Werkbund members believed that unity and beauty of form was an essential achievement of civilized culture and saw industrialization as a force that demanded a recalibration of German aesthetic standards. They believed that German designers needed to shift their focus toward designing solely objects that could be mass produced, that the form of an object should be derived from its functional logic, and that each object should be honest about its materials. The Werkbund was an important part of the development of modern architecture and industrial design and essential to the later founding of the Bauhaus. 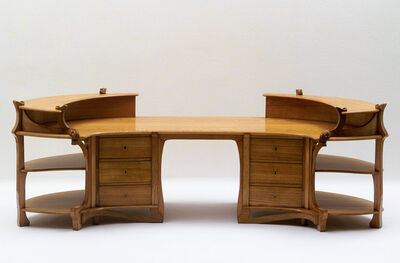