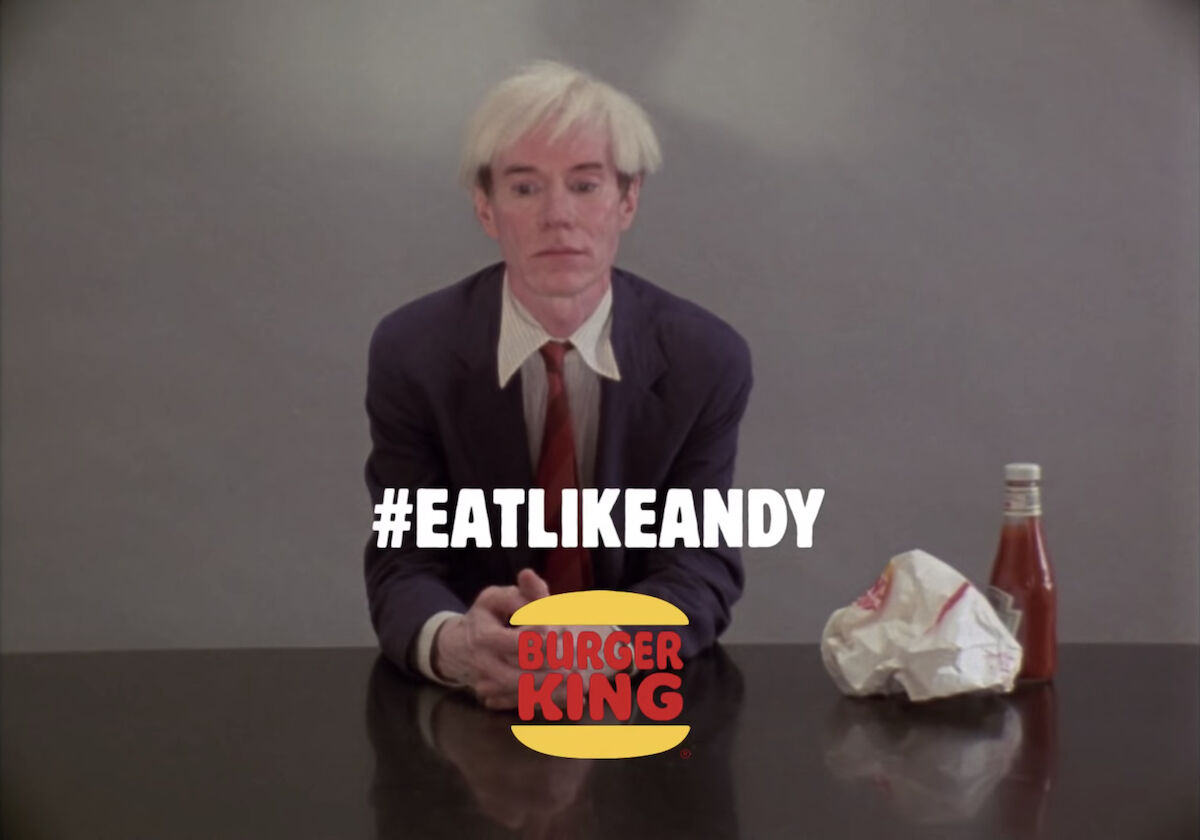 Still from the Andy Warhol Burger King commercial. Via YouTube.

Viewers of the Super Bowl on Sunday night were treated to a strange moment of zen amid the bombast of smash-mouth tackling and high-wattage halftime shows: One commercial featured slow, quiet footage of the artist Andy Warhol unwrapping and eating a Whopper cheeseburger from Burger King.

It was an unlikely juxtaposition, as it’s hard to imagine there’s a big overlap between Warhol aficionados and those who consider themselves diehard fans of the New England Patriots. And to see the fey, frail Warhol come down from the high-end confines of the Factory to scarf down a fast food burger is undeniably a bizarre sight. But after the advertising firm David Miami unearthed the footage from Jorgen Leth’s 1982 documentary 66 Scenes in America and brought it to Burger King executives, the chain thought that a meta-reference to the Warholian themes about fame and branding at play during the commercial-stuffed Super Bowl would make their ad stand out.

It was like, holy shit if we manage to put this in the middle of the biggest extravaganza of the year, we’re going to blow everyone’s minds. It’s so simple, and it’s sort of meta. You’re breaking the fourth wall in a way and messing with people.

The typical Super Bowl ad tends to be loud music, full of celebrities and really screaming loud to break the clutter. We see our ad as breaking all the rules of the typical Super Bowl ad—our ad doesn’t have music, doesn’t have voiceover, is not 30 seconds, was not shot this year. Our ad was shot in 1982. I believe that it will act like a silent assassin during the Super Bowl—it will cut through the noise with silence.

Eagle-eyed museumgoers may have noticed this clip wasn’t exactly lost to time, as this exact portion of Leth’s documentary is currently installed at the Whitney as part of the Warhol retrospective “From A to B and Back Again.” Nor was this footage the only sign of Warhol’s enduring influence on high and low culture on Super Bowl Sunday; a pre-game ad for Coca-Cola drew inspiration from a line in the Pop artist’s 1975 tome, The Philosophy of Andy Warhol: From A to B and Back Again: “A Coke is a Coke and no amount of money can get you a better Coke than the one the bum on the corner is drinking.”