Banksy has made seven new works on the streets of Paris in response to the French crackdown on immigration. 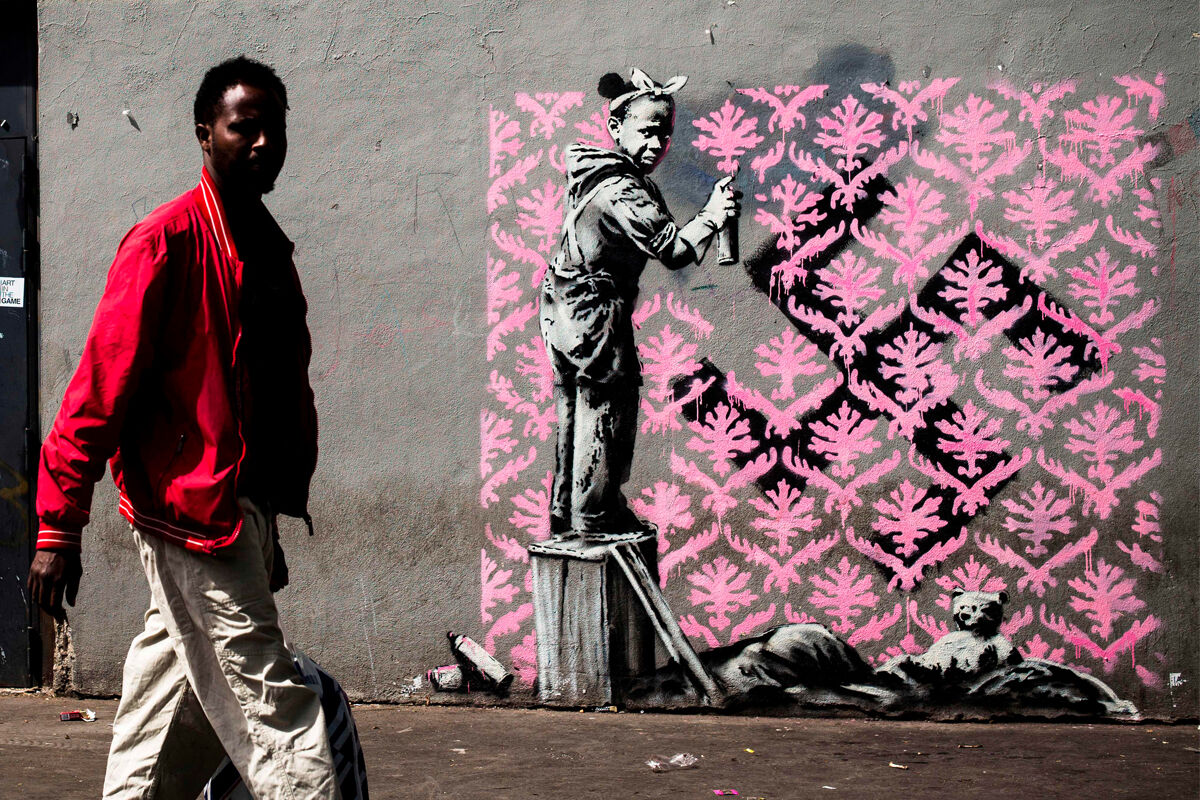 Beginning on World Refugee Day last Wednesday, a series of street art paintings began appearing in Paris that beared an unmistakable likeness to the work of Banksy, the mysterious graffiti figure whose works on public walls have sold for millions. Banksy has never shied away from overtly political work, and the blitz through Paris addresses the issues of the day—the works appear to attack the intensified crackdown on immigration and increasing racial discord in the city.

In one, a black girl is trying to paint over a swastika, covering the hate symbol with a pink pattern. The work was created in the northern part of Paris, an ethnically mixed part of the city; in May, city officials cleared out a nearby refugee shelter, forcing more than 1,000 migrants onto the streets. Another work that cropped up in the past week echoes Jacques-Louis David’s triumphant depiction of Napoleon charging through the Alps on a horse—but in Banksy’s version, Napoleon is wearing a full-length Islamic headscarf, garments which were banned in France in 2010. Another work pictures a woman mourning at the exit of the Bataclan concert hall, the site of the 2015 massacre by jihadists affiliated with ISIS.

The works couldn’t initially be officially attributed to Banksy. However, Nicolas Laugero Lasserre, editor of the French culture website Artistik Rezo, told the Independent that they were legit, claiming that he knew about the artist’s plans ahead of time. On Tuesday afternoon, Banksy confirmed his presence in Paris by posting three images to Instagram. The first features a large rat stenciled onto the side of a building with the caption, “Centre Pompidou,” and the second post shows the artwork up-close, and is captioned, “Fifty years since the uprising in Paris 1968. The birthplace of modern stencil art.” The last image features two rats strolling across a brick wall, with a blurry Eiffel Tower in the background.

Some enterprising Parisians didn't even wait for works to be officially authenticated before taking steps to shore up their potential market value: ABC News has an image of two men covering up one of the paintings with a protective plastic shield. They were too late to cover the swastika work, however, which was partially covered over with blue spray paint on Monday.

This post has been updated to reflect that Banksy claimed the works as his subsequent to publication.