The buyers of two editions of Maurizio Cattelan’s banana artwork were revealed. 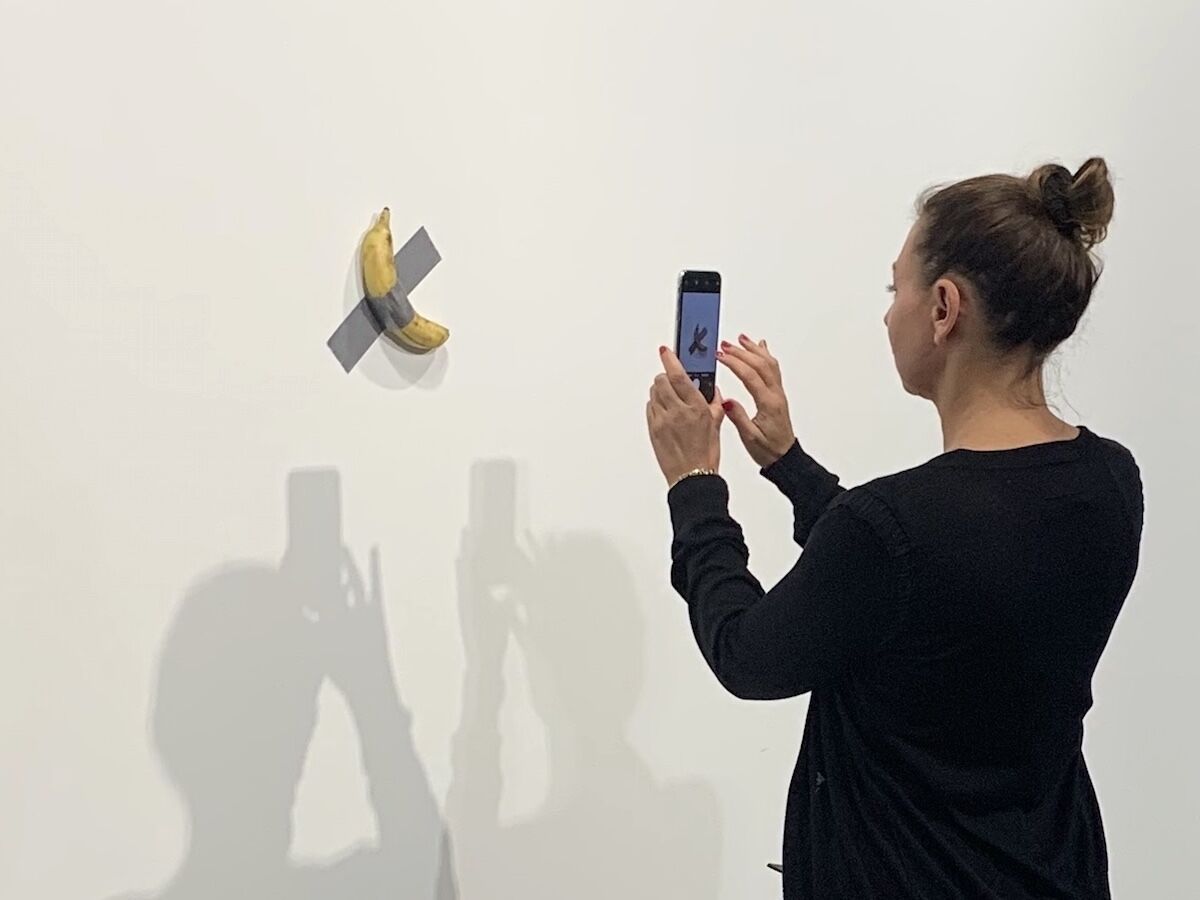 A visitor to Art Basel in Miami Beach photographs Comedian (2019) by Maurizio Cattelan in the Perrotin booth. Photo by Benjamin Sutton.

The buyers of two editions of Maurizio Cattelan’s banana masterpiece, Comedian (2019), have been revealed. Miami art collectors Billy and Beatrice Cox have purchased one version of the work—which consists of a banana duct-taped to a wall—for $120,000, while Sarah Andelman, founder of the Parisian boutique Colette, purchased another edition.

In a statement to Page Six, the Coxes said:

We are acutely aware of the blatant absurdity of the fact that Comedian is an otherwise inexpensive and perishable piece of produce and a couple of inches of duct tape. When we saw the public debate [the Maurizio Cattelan piece] sparked about art and our society, we decided to purchase it. We knew we were taking a risk, but ultimately we sense that Cattelan’s banana will become an iconic historical object.

The couple compared the work to Andy Warhol’s Campbell’s soup cans, and said they planned to eventually donate the piece to a museum.

Emmanuel Perrotin, who showed Comedian at Art Basel in Miami Beach, told The Art Newspaper that one edition of the work was purchased by a client who wanted to remain anonymous. Andelman, who bought another edition, told TAN she purchased the work to hang in the office of her consulting and curating company Just an Idea, and would be happy to “lend” the work to museums.

All editions of Comedian come with a certificate of authenticity; Andelman said she might frame her certificate, even if she didn’t always have her edition of the work on display.

Comedian made its debut at Art Basel in Miami Beach last week, where it drew crowds of onlookers and selfie-seekers. Disaster struck when performance artist David Datuna removed the work and ate it, though gallery representatives said the banana could be replaced. Comedian was taken down a day early due to overcrowding, and in a final twist, a man tagged the empty wall with the words “Epstien [sic] didn’t kill himself.”

Beyond its brief run in Miami Beach, the divisive work has spawned homages and parodies of all sorts—many of them gathered under the hashtag #Cattelan and on a dedicated Instagram account created by Perrotin—from the fast food restaurant Popeyes seeking to capitalize on the trending conceptual artwork, to the Tampa Bay Police Department offering up a doughy alternative.

Further Reading: What Sold at Art Basel in Miami Beach