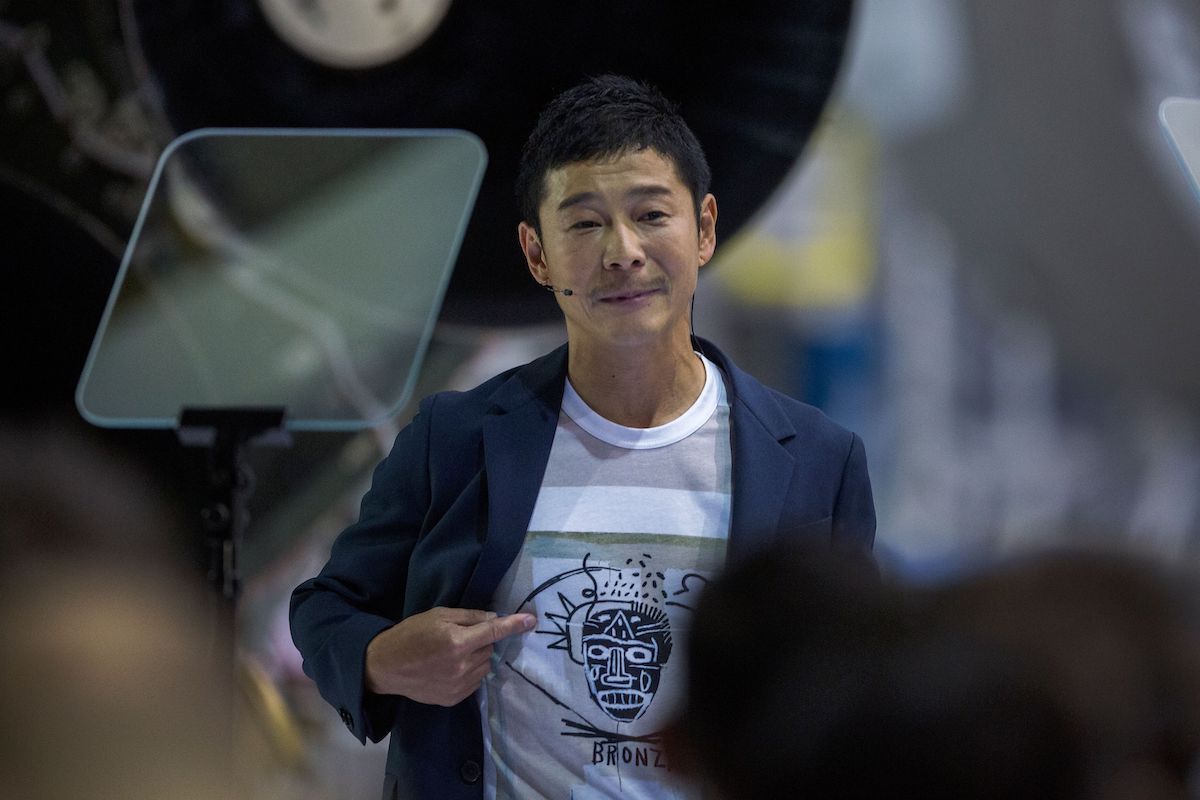 Japanese billionaire Yusaku Maezawa wears a shirt depicting a work by Jean-Michel Basquiat during the announcement by Elon Musk that he will be the first private passenger who will fly around the Moon aboard the SpaceX BFR launch vehicle. Photo by David McNew/AFP/Getty Images.

Last week, Elon Musk hinted on Twitter that he had found his first customer for a trip to the Moon aboard the Big Falcon Rocket, a SpaceX vessel that’s expected to cost somewhere between $2 billion and $10 billion and will be taller than the Statue of Liberty. In a press conference at SpaceX headquarters on Monday, that customer was revealed to be Yusaku Maezawa, the Japanese online retail billionaire who emerged as one of the world’s top contemporary art collectors when he paid $110 million for a work by Jean-Michel Basquiat at Sotheby’s in May 2017. The trip is tentatively scheduled for 2023— “If everything goes 100 percent right, then this is the date,” Musk stressed—and the ship is expected to cost $5 billion, though initial estimates had put it at $10 billion.

“Why do I want to go to the Moon,” Maezawa said during remarks to the crowd at the company’s hanger in Hawthorne, California. “This is very meaningful. I thought long and hard about this, and at the same time I thought about how I can give back to the world.”

The trip will follow the same loop around the Moon taken by the passengers about the Apollo 8 mission, though the accommodations will be roomier this time: the ship is the size of a 35-story building and can hold 100 passengers, including the crew. Maezawa said he plans to use the extra seats for a project he calls Dear Moon, whereby six to eight artists from different backgrounds will be gifted tickets to the Moon and come along for the journey of a lifetime.

Wired quoted Musk—who is coming off a turbulent summer where the price of Tesla stock shot up 11 percent after its CEO tweeted he was considering taking the company private, only to see if fall 9 percent after a tearful interview with the New York Times—as saying that he sees the extra seats Maezawa purchased for artists as a universal art project.

It’s unclear how Maezawa will choose the artists for the lunar voyage. He collects work by living artists including Mark Bradford, George Condo, Yoshitomo Nara, Jenny Holzer, and Richard Prince. On his lively Instagram page, it’s clear that he hangs out with artists such as Mark Grotjahn, Henry Taylor, Ed Ruscha, and Ai Weiwei. Perhaps one of them will join him on his trip to the Moon.