Female artists in the U.K. made major gains, except at London’s commercial galleries, a study found. 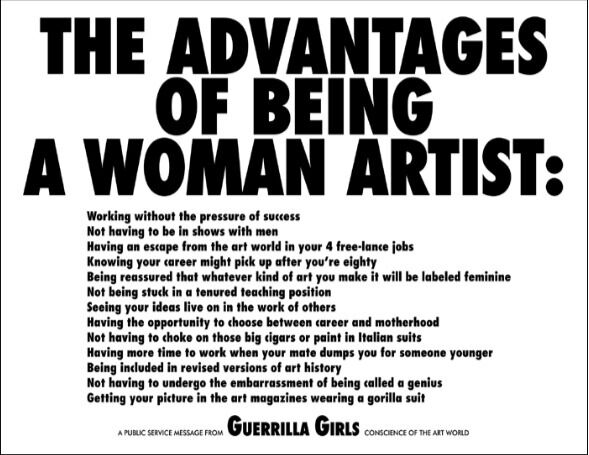 Guerrilla Girls
The Advantages of Being a Woman Artist, 1988
mfc - michèle didier

Women artists in the U.K. are receiving a growing share of prizes, commissions, grants, and public art projects, but London’s major galleries and auctions remain disproportionately devoted to male artists. According to the Freelands Foundation’s “Representation of Female Artists in Britain” 2019 report, 28 of London’s major commercial galleries were 68% male last year, with female artists and their estates making up just 32% of the artists represented.

The gender distribution of artist at London’s leading galleries only got slightly better during the city’s banner contemporary art week. For Frieze Week 2018, 38% of solo shows at those same 28 galleries were devoted to female artists. The report also found that works by female artists made up just 12% of the lots at Sotheby’s evening sales of contemporary art in March, June, and October of 2018.

The latest Freelands Foundation report is its fourth focusing on the issue of gender representation. In addition to research, the foundation organizes exhibitions and events at its London space and, among other initiatives, gives out a £100,000 ($127,000) award to support an exhibition of mid-career female artist at a U.K. institution. It was founded by Elisabeth Murdoch, a daughter of billionaire media mogul Rupert Murdoch.

This year’s findings in the non-commercial sector were generally more encouraging than the commercial sector statistics. In 2018, 55% of solo exhibitions at London’s non-commercial institutions were devoted to female artists, a dramatic upswing from the 39% figure for 2017. Another major showcase for contemporary British art, the Venice Biennale, has also seen its gender dynamics improve—over the last 20 years, 36% of artists representing the U.K. have been female, and in the last decade the U.K. pavilion has been evenly split between female and male artists. And Turner Prize winners have been predominantly female over the past decade. The last three recipients have been female: Helen Marten, Lubaina Himid, and Charlotte Prodger.

The report found significant gender disparities in leadership positions as well. Among non-commercial spaces in London, just 42% are run by women; among major institutions (those receiving more than £500,000, or $635,000, in grants) outside of London, just 23% have female leaders. Only 37% of the highest-paid staff at art and design universities in the U.K. are female. However, the study also suggests those administrative discrepancies are likely to shift: women make up 64% of students in undergraduate arts and design programs and 65% of students in related postgraduate courses. Will the influx of more women studying the arts shift the scale for female artists and gallery leadership?

Further Reading: Why Is Work by Female Artists Still Valued Less Than Work by Male Artists?