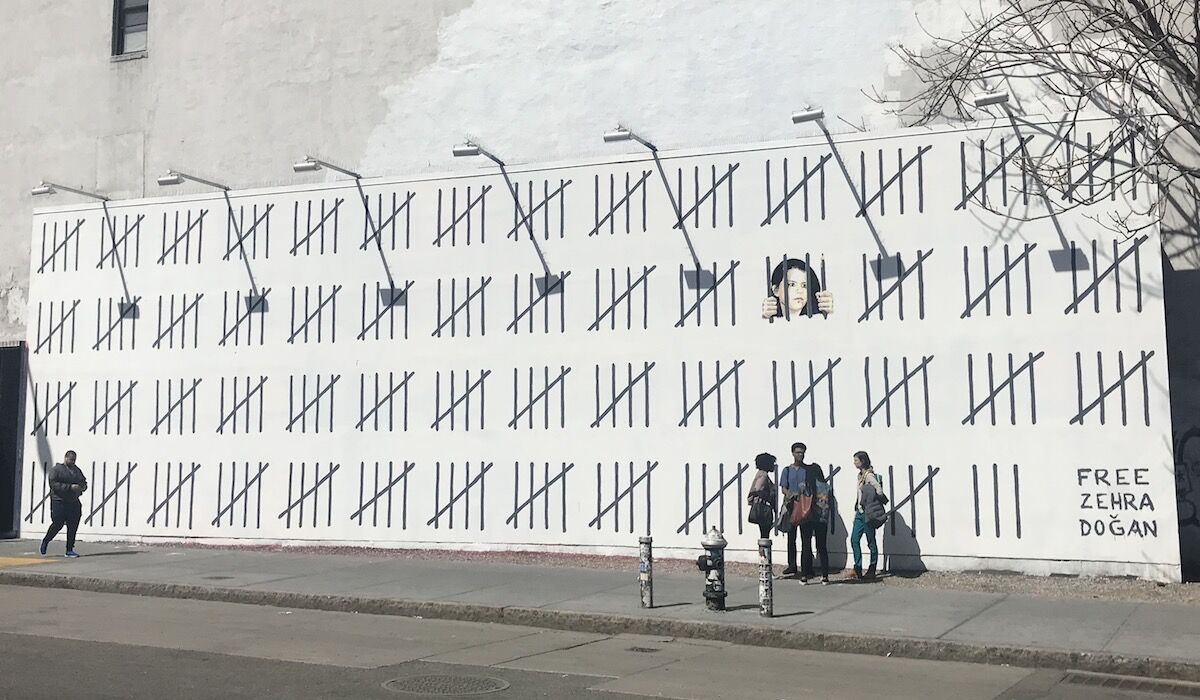 A mural by Banksy and Borf in New York City calling for the release of Turkish artist and journalist Zehra Doğan. Photo by Benjamin Sutton for Artsy.

The artist and journalist Zehra Doğan has sent Banksy a thank-you letter that had to be illegally smuggled out of Turkey’s infamous Diyarbakır prison, where she is serving a 34-month sentence, in order to reach the secretive British street artist. Doğan wrote the letter out of gratitude to Banksy for a mural he created in collaboration with graffiti artist Borf in March in New York City, calling attention to her situation and advocating for her release. The handwritten letter, which was posted to Banksy’s Instagram account along with an abridged translation, opens with a description of the conditions at Diyarbakır, where she and many other members of Turkey’s Kurdish minority have been held and tortured.

“I’m writing this illegal letter to you from a dungeon which has a history of bloody tortures, in a town with a lot of bans, in a denied country,” the letter begins. “The letter is illegal, because I have a ‘communications ban’ that forbids me from sending letters [or] making phone calls so I’m writing and delivering this letter in clandestine ways.”

In July of 2016, Doğan—who is an ethnic Kurd—was arrested after sharing an image on social media of a painting she’d made of the bombed remnants of Nusaybin, a predominantly Kurdish city in southern Turkey near the Syrian border. The painting was based on a photograph circulated by the Turkish military, which showed the damage wrought by fighting between Turkey and the Kurdistan Workers’ Party (PKK). At her trial in early 2017, she was acquitted of the more serious charge of being a member of an illegal organization—over her suspected ties to the PKK—but nevertheless sentenced to 34 months in prison because of her painting.

“What makes this country, that slaughters the people who stand up against oppression, fears (sic) the most is showing the reality just like a mirror to them,” Doğan’s letter to Banksy continues. “And with your support, my painting now accomplished its mission of showing the atrocities. I was surprised when they accused me by ‘Leading people to rebellion, rage and hatred’ because of my painting. But now, I say ‘This painting was worth my time in prison because I managed to show the reality of Nusaybin.’”