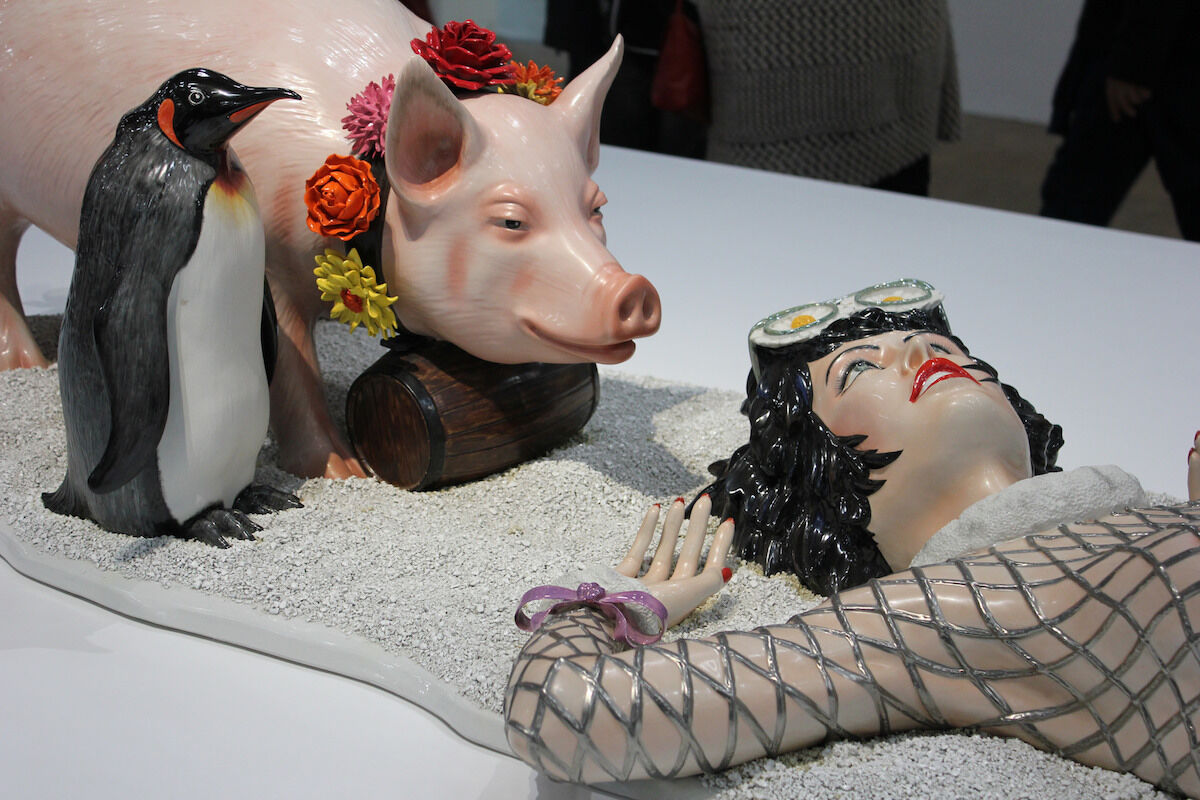 The creative director behind a 1985 advertising campaign for French fashion brand Naf Naf is suing Jeff Koons for allegedly plagiarizing one of the ads to make his sculpture Fait D’Hiver (1988). The adman Franck Davidovici is calling for the Koons to be seized and seeking damages of €300,000 ($353,000) for what his lawyer claims is a “servile copy” of the advertisement. The porcelain sculpture, from Koons’s “Banality” series, features the torso, head, and arms of a partially nude woman with short black hair reclining beside a pig, which is flanked by  two penguins. The original ad featured a woman with similarly short, black hair lying in snow with her arms raised and a pig standing beside her. The Prada Foundation bought one of the editions of Fait D’Hiver at Christie’s in 2007 for $4,297,000.

“It’s the same work in three dimensions, to which Jeff Koons has added flowers and a penguin to evoke cold, with the aim of sticking to the original work,” Jean Aittouares, Davidovici’s attorney, told The Telegraph. “The statement is strictly the same.” The ad campaign and the artwork also share a title, Fait D’Hiver, a pun on the French word for winter, “hiver,” and the expression “fait divers,” or news item. Davidovici only learned of the sculpture’s existence from the catalogue for 2014 show, “Jeff Koons: A Retrospective,” which traveled from the Whitney to the Centre Pompidou and the Guggenheim Bilbao. He is also suing the Pompidou, the publisher Flammarion, and Prada, for publishing images of the sculpture.

This is hardly the first time a work from Koons’s “Banality” series has sparked a lawsuit. Last year, a French court found in favor of the estate of photographer Jean-François Bauret, which had sued Koons for basing his porcelain sculpture Naked (1988) on the Bauret’s black-and-white photo of a pair of nude children. Koons’s company, Jeff Koons LLC, along with the Centre Pompidou—which had prominently featured the sculpture in an advertisement—were ordered to pay Bauret’s estate €40,000 ($47,000). Alain Seban, who was the Pompidou’s president at the time that lawsuit was filed, defended the “Banality” series, stating that its “very principle is to take mass produced objects and images from the popular press as points of departure.”