Leonardo da Vinci’s early drawings for “The Virgin of the Rocks” were revealed through X-ray analysis. 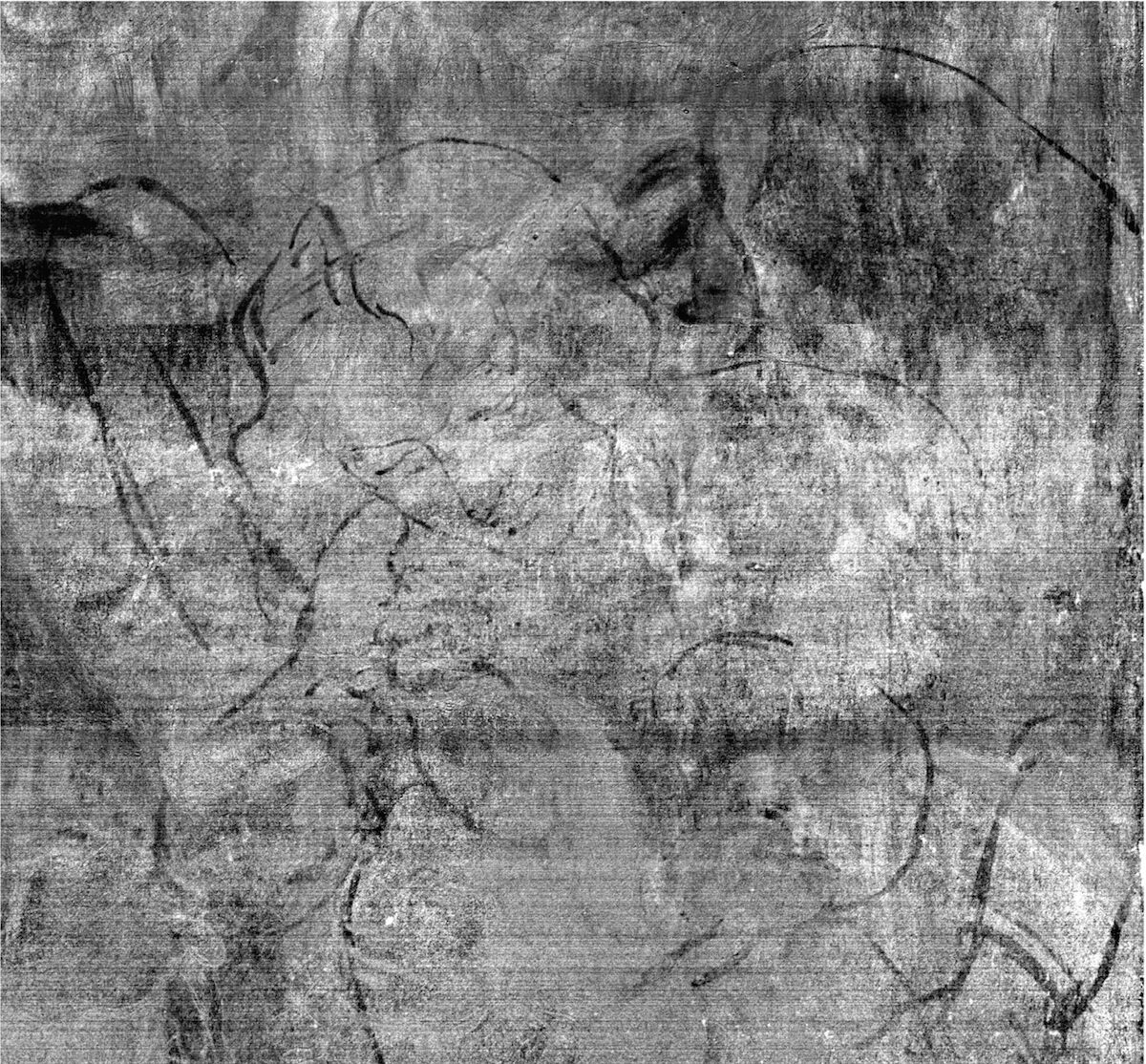 Detail from hyperspectral imaging data, revealing the drawing for the angel and baby of the first composition (under the landscape at the right side of the painting). © The National Gallery, London.

Leonardo da Vinci’s The Virgin of the Rocks (about 1491/2–9 and 1506–8) originally had a very different composition, new research by the National Gallery in London revealed. Analysis of the artwork showed that two distinct drawings depicting the same figures in different poses lie beneath the painting, which is one of the most popular in the museum’s collection.
In the first composition, the angel holds the infant Christ much more tightly, and both figures are positioned higher. The Virgin also looks toward the pair, instead of staring downward. A second composition aligns much more closely to the final version, but still sheds light on Leonardo’s artistic process. In that version, the infant Christ’s head is seen in profile, and some of the angel’s curly hair is missing. Experts also found handprints on the painting from patting down the priming on the panel, which may belong to an assistant or to Leonardo himself. 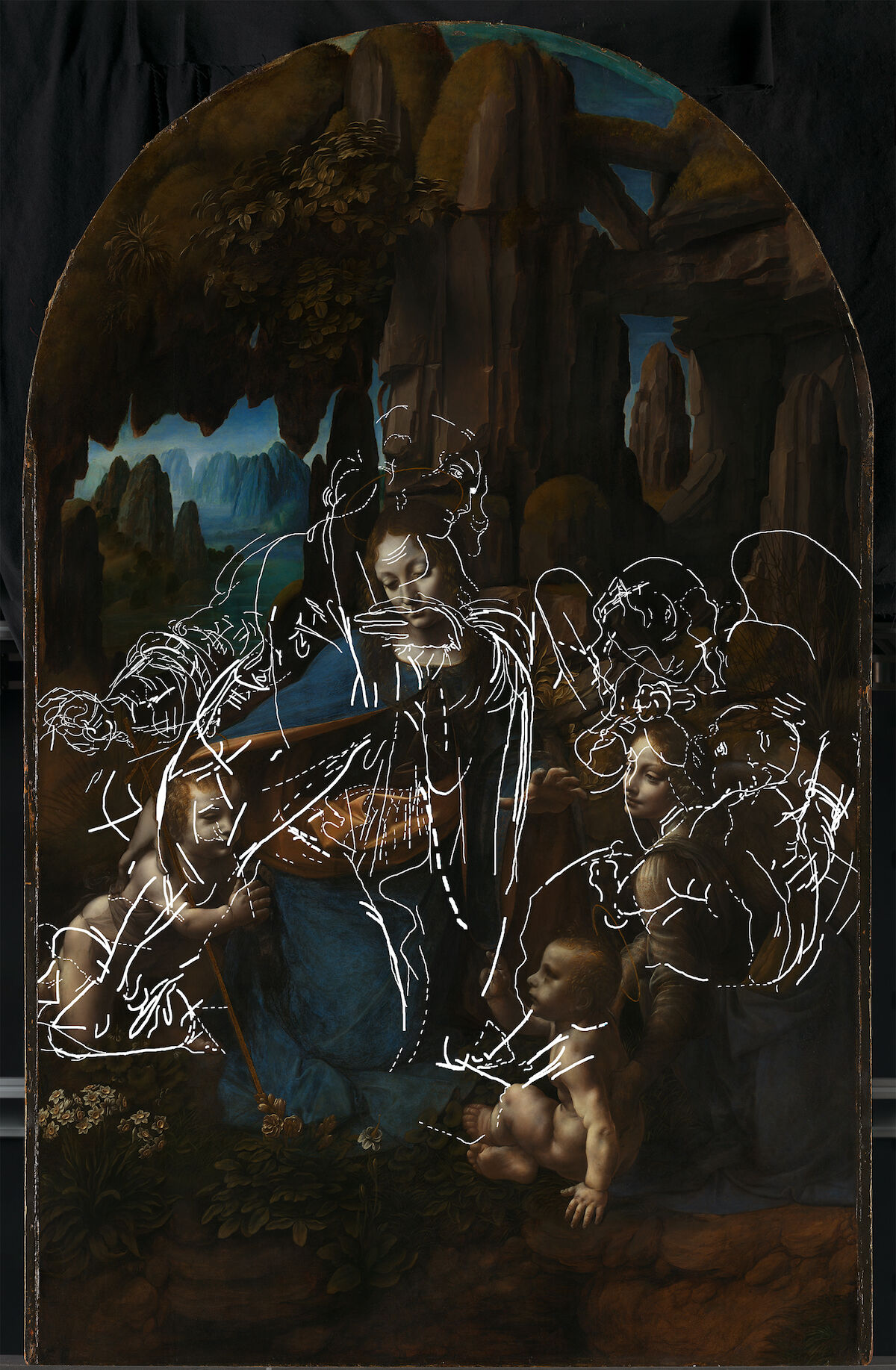 Leonardo da Vinci, The Virgin of the Rocks, with tracing of the lines relating to underdrawing for the first composition, incorporating information from all technical images. © The National Gallery, London.

The newly discovered drawings were made using materials that contained zinc, enabling them to be seen in macro X-ray fluorescence maps. The scientific analysis of the painting also involved new infrared and hyperspectral imaging. Research conducted in 2004 and 2005 showed that the Virgin’s pose had been altered, but revealed little evidence of other changes to the painting. An 18-month restoration of the work began in 2008 and it was returned to public display in 2010.
The National Gallery’s The Virgin on the Rocks is Leonardo’s second version of the painting (though some have questioned its attribution to the Renaissance master). Many experts theorized that Leonardo’s clients were not satisfied with the original painting, causing him or an assistant to repaint it. A version from the 1480s belongs to the Louvre.
The National Gallery announced the discovery of the hidden drawings ahead of a new exhibition focusing on The Virgin of the Rocks, set to open November 9th, as part of a global slate of shows marking the 500th anniversary of the artist’s death. The show, taking up the museum’s ground floor galleries, will invite visitors to explore the ways Leonardo’s research and scientific studies informed his paintings. 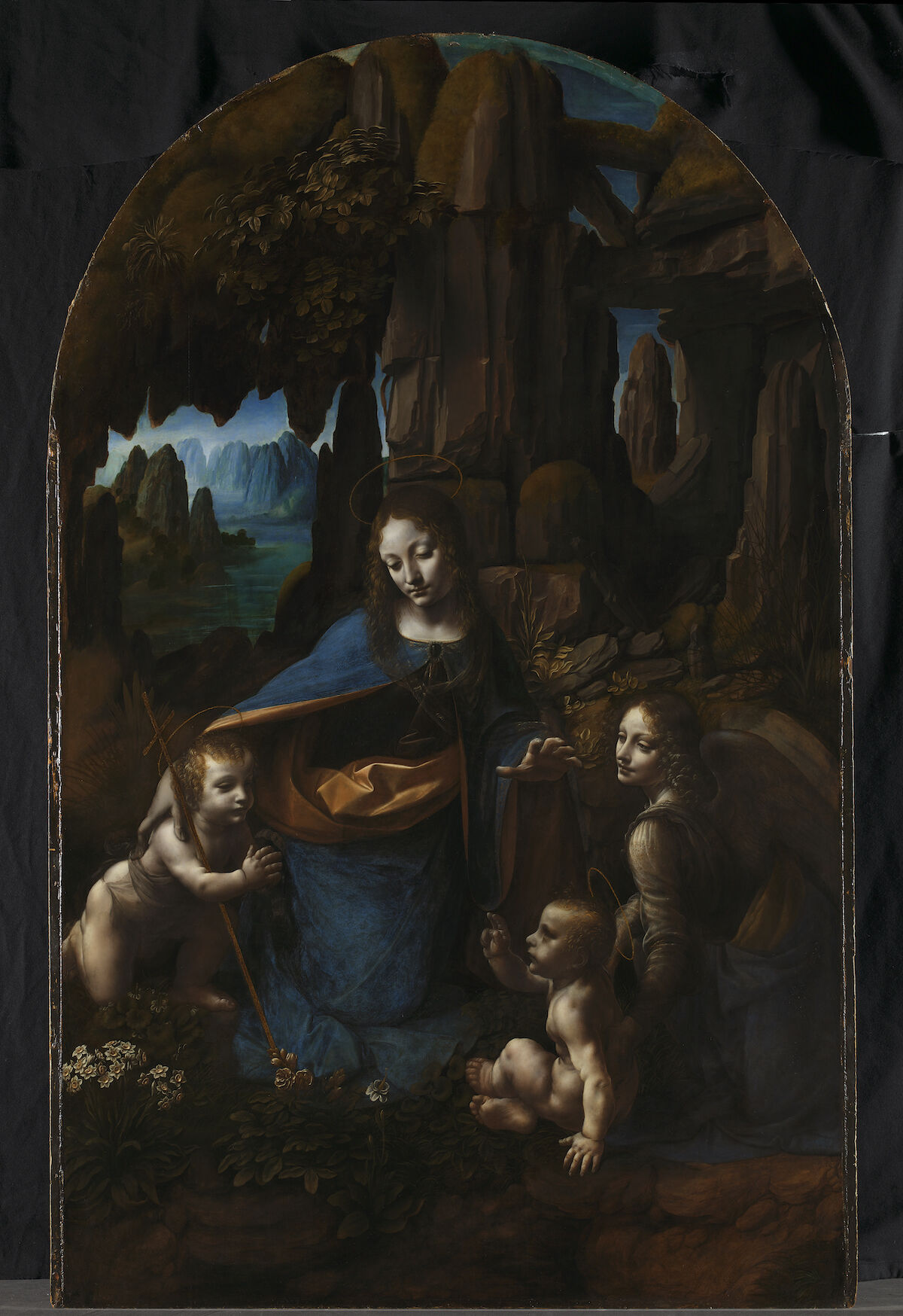 Leonardo da Vinci, The Virgin with the Infant Saint John the Baptist adoring the Christ Child accompanied by an Angel, or The Virgin of the Rocks, ca. 1491/2–9 and 1506–08. © The National Gallery, London.

Of the upcoming exhibition, Caroline Campbell, director of collections and research at the National Gallery, said in a statement:

By its very nature, much of the research we do at the National Gallery takes place in closed studios, laboratories and libraries. This is an exciting opportunity to not only share our innovative findings, but also to invite the public to explore and engage with what we have found.