A letter Vincent van Gogh wrote to a critic who praised his work was acquired by the Van Gogh Museum. 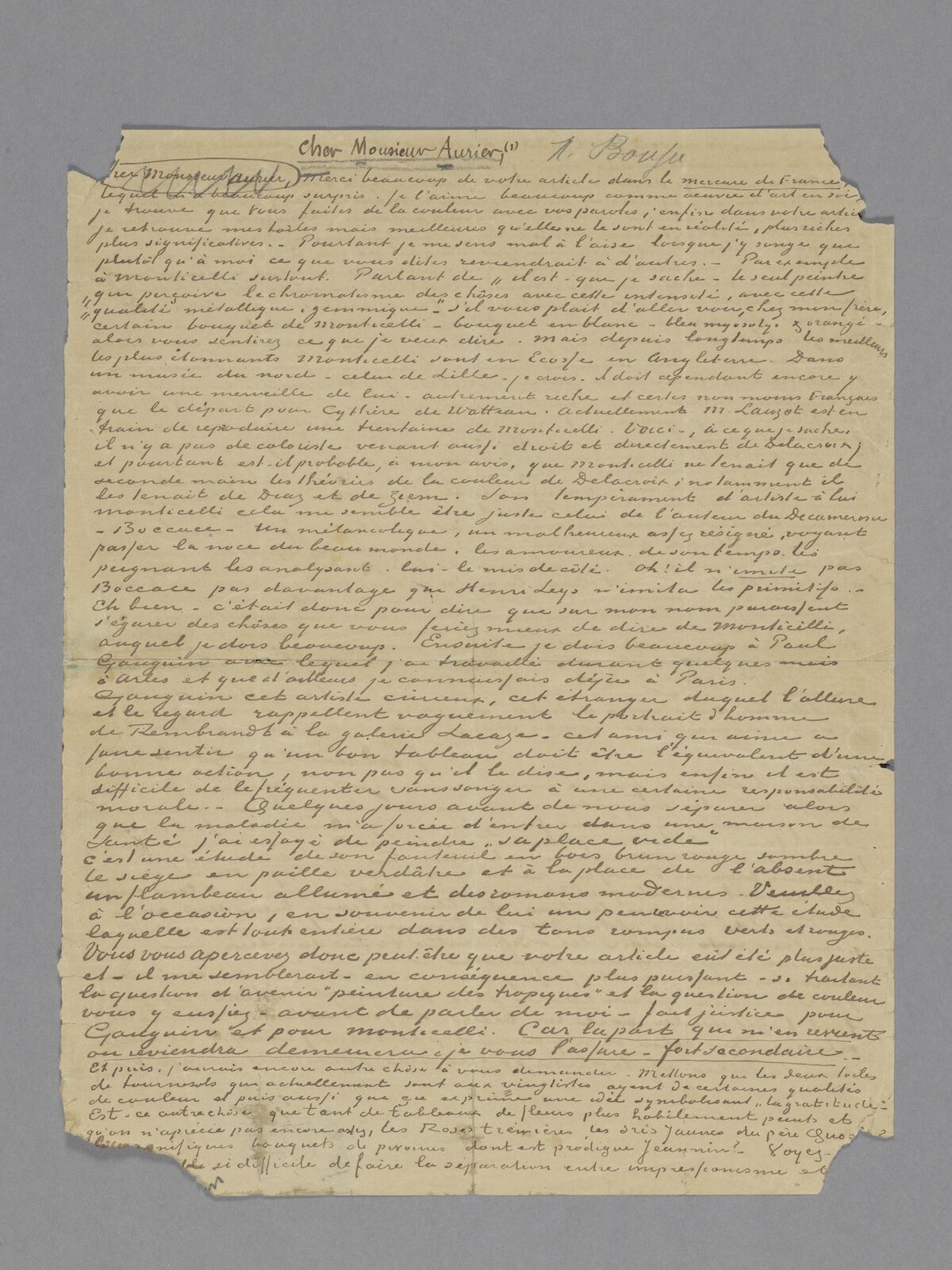 The front of the letter from Vincent van Gogh to Albert Aurier, 9 or 10 February, 1890. Van Gogh Museum, Amsterdam (gift of Mr and Mrs Cheung Chung Kiu).

Amsterdam’s Van Gogh Museum has acquired a hand-written letter sent in February 1890 by Vincent van Gogh to the poet and art critic Albert Aurier, thanking him for his glowing review of the artist’s paintings. Van Gogh penned the letter from the asylum in Saint-Rémy-de-Provence, the locale from which he painted some of his most famous works. He would take his own life less than a year later.

The letter, which was transcribed and translated in full by The Guardian, begins thusly:

Thank you very much for your article in the Mercure de France, which greatly surprised me. I like it very much as a work of art in itself, I feel that you create colours with your words; anyway I rediscover my canvases in your article, but better than they really are—richer, more significant.

After being owned by multiple private collectors throughout the world, the letter was acquired in 2007 by the French company Aristophil, whose holdings were slated for auction after the company went bankrupt in 2015 and those who ran it were arrested on charges of fraud. The letter has since been acquired by the Van Gogh Museum for €107,900 ($120,900) with funds donated by Hong Kong tycoon Cheung Chung-kiu and his wife, Cecilia. It will soon go on public display for what may be the first time ever. 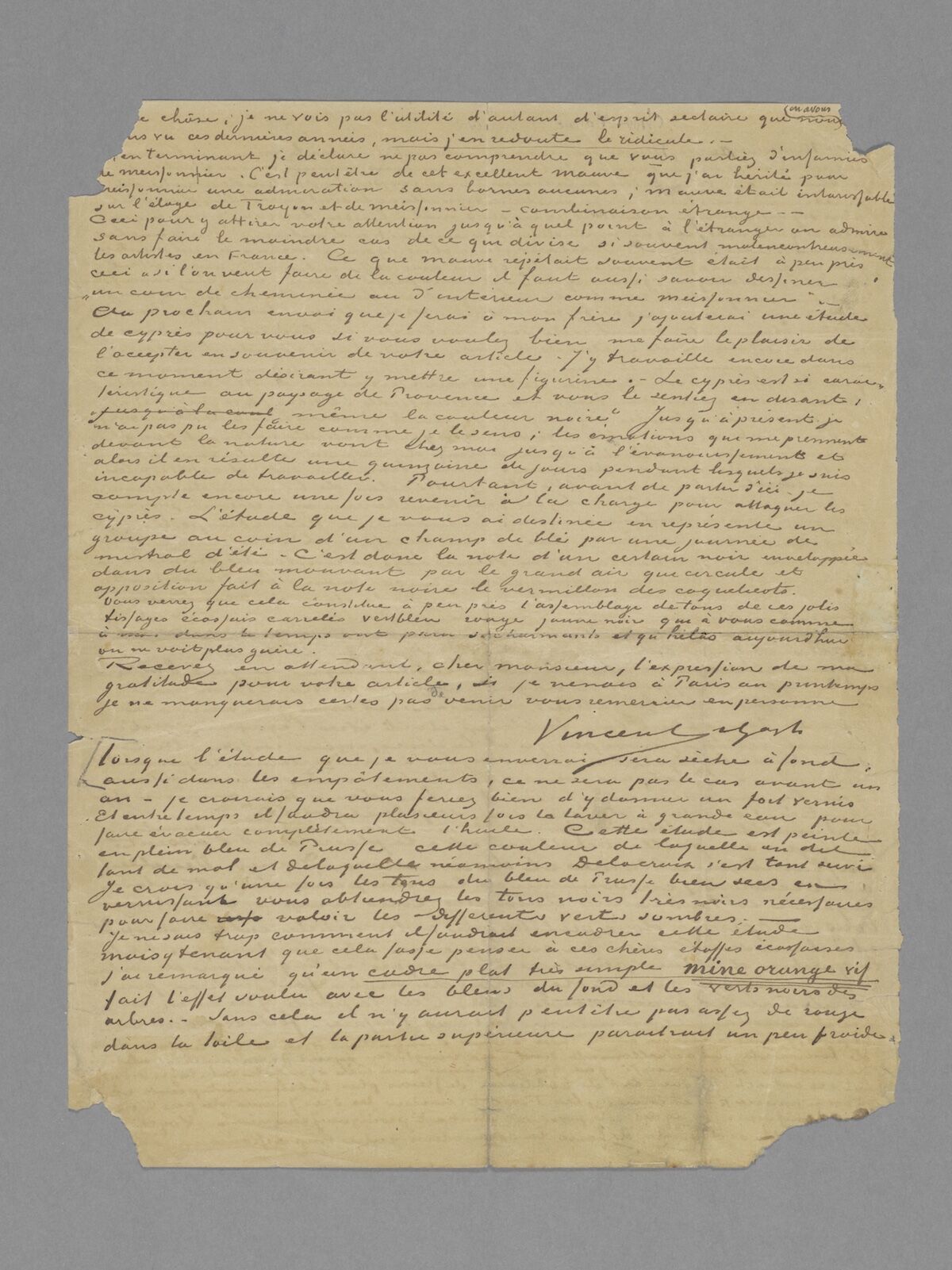 The back of the letter from Vincent van Gogh to Albert Aurier, 9 or 10 February, 1890. Van Gogh Museum, Amsterdam (gift of Mr and Mrs Cheung Chung Kiu).

It was on top of our list because it is such an important letter. Most of the letters on our wish list have sketches on them. This one has not, but the content of it is so moving and rich that we thought we should pursue it. [. . .] [Van Gogh was] very happy to have this review and he writes to his brother Theo, at the same time, that it is like getting a golden medal at the Salon if he were more a more traditionalist artist. He asked his brother to share the review with all his friends and artistic colleagues.

He feels like it is too much attention for him individually and he is so indebted to other painters such as Gauguin and more obscure ones such as [Adolphe] Monticelli, and he wants to stress that it is not an individual achievement but that he is standing on the shoulders of others.

The letter ends with a P.S. in which Van Gogh promises Aurier that he will send him a painting, though he warns that it will take at least a year to dry, seemingly due to the thickness of the paint.

Further Reading: Before Van Gogh Was a Painter, He Was an Art Dealer