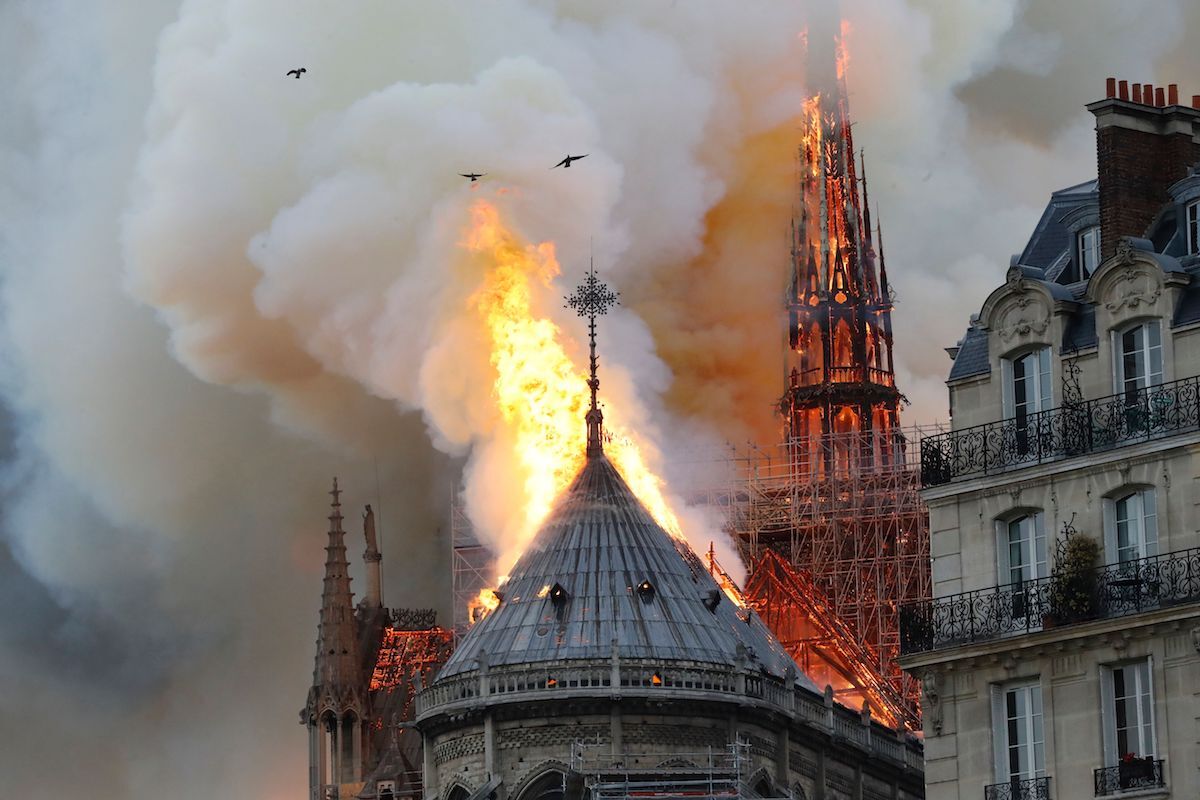 A fire at Notre Dame Cathedral on April 15, 2019. Photo by François Guillot/AFP/Getty Images.

The roof of Paris’s iconic Notre Dame Cathedral was engulfed in flames on Monday evening; a Notre Dame official told Le Monde the blaze began after a fire was spotted in the cathedral’s attic around 6:50 p.m. local time. Though the severity of the fire remains unknown, dramatic footage from the scene on social media and news media showed flames overtaking the spire and roof of the cathedral, both of which ultimately collapsed. Anne Le Breton, the adjunct to the mayor of the 4th arrondissement, where the cathedral is located, told France Info late Monday evening that firefighters were working to stop the fire from spreading to the towers that make up the façade of the building. 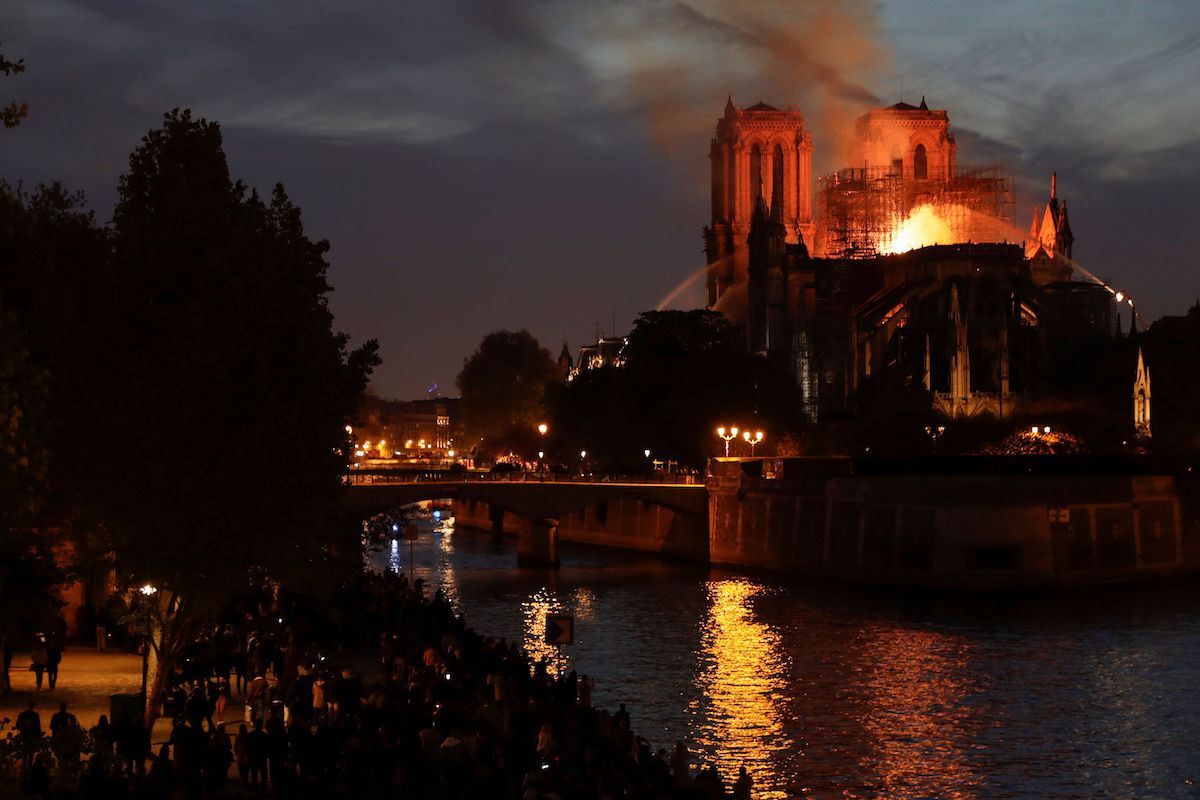 On Twitter, Paris’s Mayor Anne Hidalgo said the city’s fire department and the Diocese of Paris were coordinating their efforts to fight the fire and set up a security perimeter. According to AP, Deputy Mayor Emmanuel Gregoire told BFMTV that first responders are trying to save the countless artworks and other valuable objects from within the cathedral. French President Emmanuel Macron, who was due to give a televised speech on Monday night addressing the Yellow Vests movement, canceled those plans to visit the cathedral.
The cathedral is currently undergoing an €11-million ($12.4 million) renovation, which involved lifting 16 copper statues from its central spire last week. This spire, which was added to the cathedral in the 19th century, was the focus of the restoration work underway when the fire broke out. Just before 8 p.m. local time, the tip of the spire collapsed, followed by the rest of it and much of the roof structure not long thereafter. A spokesperson for the fire department told the AFP the fire was “potentially linked” to the renovations. 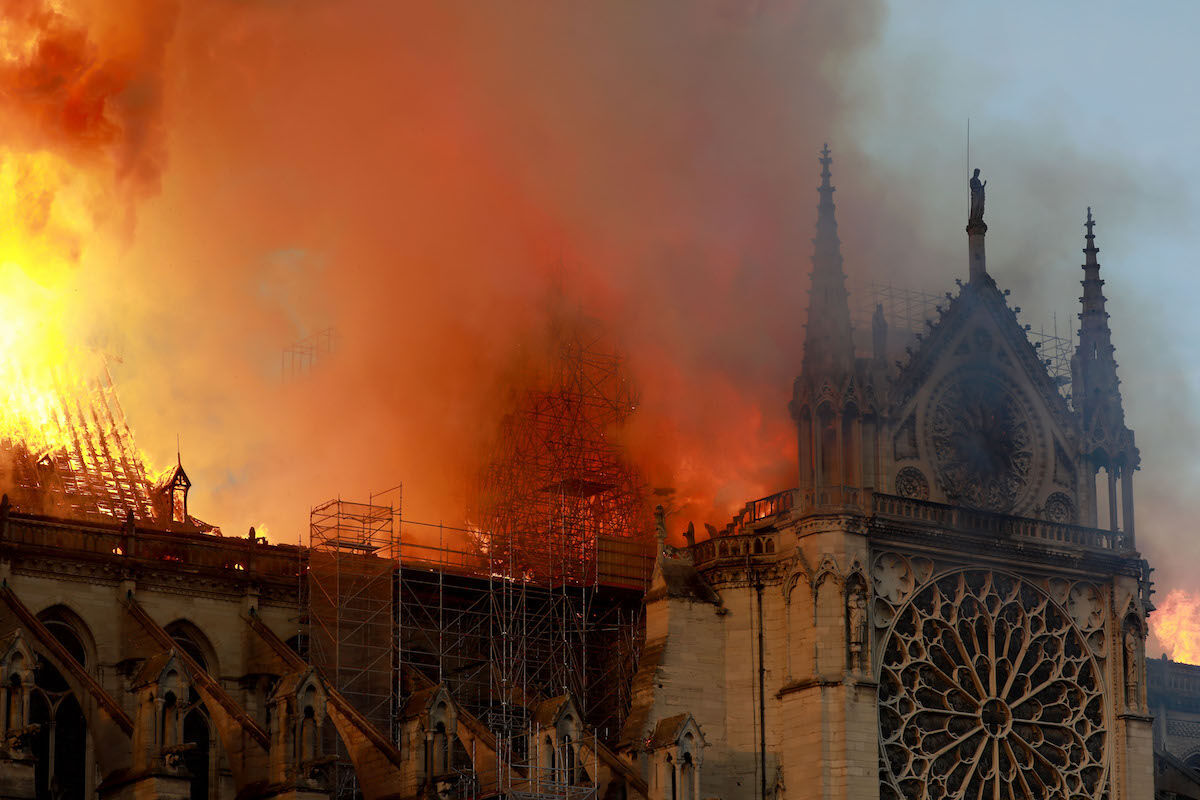 The enormous Gothic cathedral was built between 1163 and 1345 atop the ruins of two previous churches. Pope Alexander III laid its foundation stone in 1163, and its high altar was consecrated 23 years later. It is among the most popular tourist sites in the French capital, drawing about 13 million visitors each year.

Further Reading: 90% of Notre Dame’s Artworks Were Saved Thanks to Emergency Evacuation Plans

Further Reading: Art Rescued from Notre Dame Cathedral Fire Will Be Moved to the Louvre