MoMA workers rallied in the museum’s lobby ahead of the latest contract negotiations. 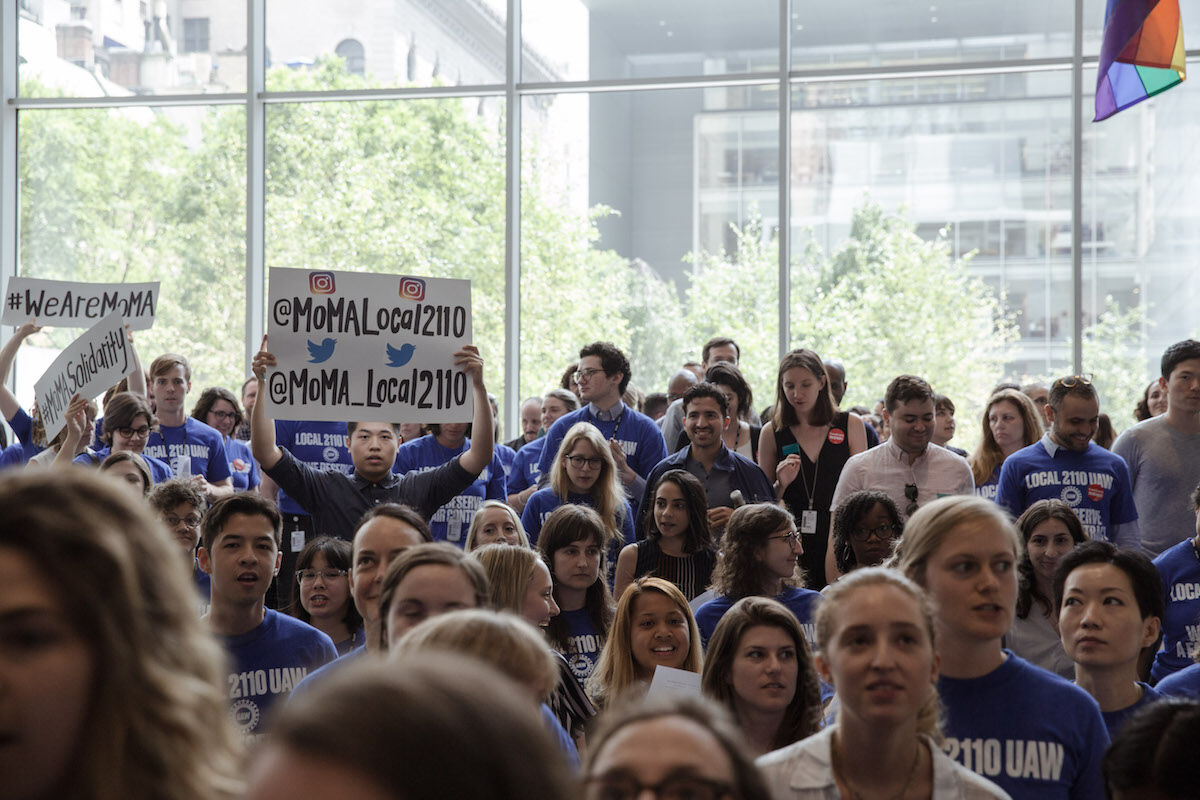 Around noon Monday visitors to the Museum of Modern Art (MoMA) were greeted by chants of “Ancient wages! Modern art!” and a rendition of the famous union song “Solidarity Forever.” Some 100 members of United Auto Workers Local 2110, the union that represents the largest number of MoMA employees (about 260 in total), were demonstrating ahead of Tuesday’s negotiations with the museum’s administration, which come two and a half months after the workers’ contract expired.

“We are the unionized workers of MoMA! We are curators, librarians, visitor services, stewards, accounting, and we are in contract negotiations,” said Maida Rosenstein, the president of Local 2110. “This action is all about showing our solidarity and unity as union membership… we’re going to do it again and again and again until they make a fair contract offer.”

After rallying in the museum lobby, Local 2110 members—many of them wearing royal blue T-shirts emblazoned with the words “Local 2110 UAW, We Deserve a Fair Contract”—marched out of MoMA’s 54th Street entrance, over to Fifth Avenue, and then along 53rd Street to the museum’s entrance there. The institution’s main entrance, also on 53rd Street, is currently closed as part of a $450-million renovation and expansion project that has been a major sticking point in the contract negotiations. While MoMA is spending enormous sums on the huge construction project, requiring many extra hours of work from its staff (many of whom are not entitled to overtime pay), it is refusing to meet the staff’s demands—which include raises for longtime staff, job security for entry-level curators, improved healthcare benefits, and more.

“Obviously we would prefer to have a peaceful resolution to these negotiations, no question,” Rosenstein said. “But we have been on strike before, and if we had to do it again, we would mobilize for that.” Local 2110 last went on strike in 2000, amid MoMA’s previous expansion and renovation project.