A Nazi-looted Renoir painting was returned to the granddaughter of the Jewish collector from whom it was stolen. 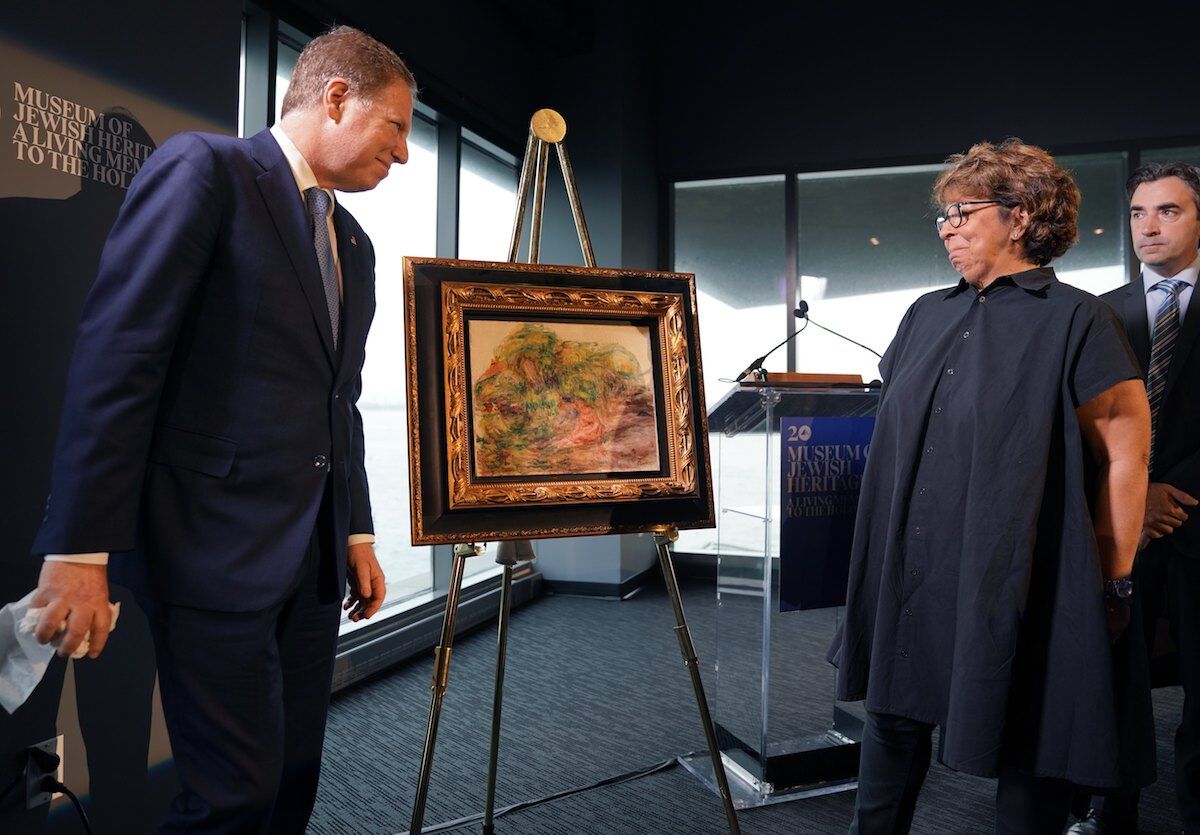 A Pierre Auguste Renoir painting,'Femmes dans un jardin, stolen by the Nazis was returned to the heir of its rightful owner, Sylvie Sulitzer, during a ceremony at the Museum of Jewish Heritage in New York on September 12, 2018. Photo by Timothy A. Clary/AFP/Getty Images)

Pierre-Auguste Renoir’s small 1919 painting of a quaint scene, Deux femmes dans un jardin, was seized from Jewish collector Alfred Weinberger’s Paris bank vault by the Nazis in 1941. In the decades since, it has popped up for sale in Johannesburg, London, and Zürich, and in 2013 a collector consigned it to Christie’s for auction in New York. Weinberger’s granddaughter, Sylvie Sulitzer, identified it as one of the paintings stolen from her grandfather and contacted the auction house, which in turn alerted the FBI. On Wednesday, in a ceremony at the Museum of Jewish Heritage in New York, Deux femmes dans un jardin was returned to Sulitzer.

“It’s lot of emotion [sic] because you really realize how people are concerned about what happened,” Sulitzer said at the ceremony, as Courthouse News reported. She added that she will likely send the work back to the auction block: “So I’ve got to see whether I can keep it. But probably Christie’s will have the painting to be sold in auction. Of course I would have loved to keep it.”

Sulitzer, who is based in southern France but flew to New York for yesterday’s repatriation ceremony, began living with her grandparents at age five, though she didn’t learn about the stolen Renoir for decades because World War II was a “taboo” subject. She told the AFP that five more paintings—four Renoirs and an Eugène Delacroix—are still missing from her family’s collection.

“The atrocities that took place during World War II at the hands of the Nazis cannot be summed up in a few words,” FBI Assistant Director-in-Charge William F. Sweeny, Jr., said in a statement. “In the process, they also carried out smaller acts of evil behavior, stealing hundreds of thousands of these pieces of priceless artwork. Some of those pieces are lost to our culture forever. However, we take a bit of pride in returning a painting looted during the war, and helping repair some of the destruction decades ago.”