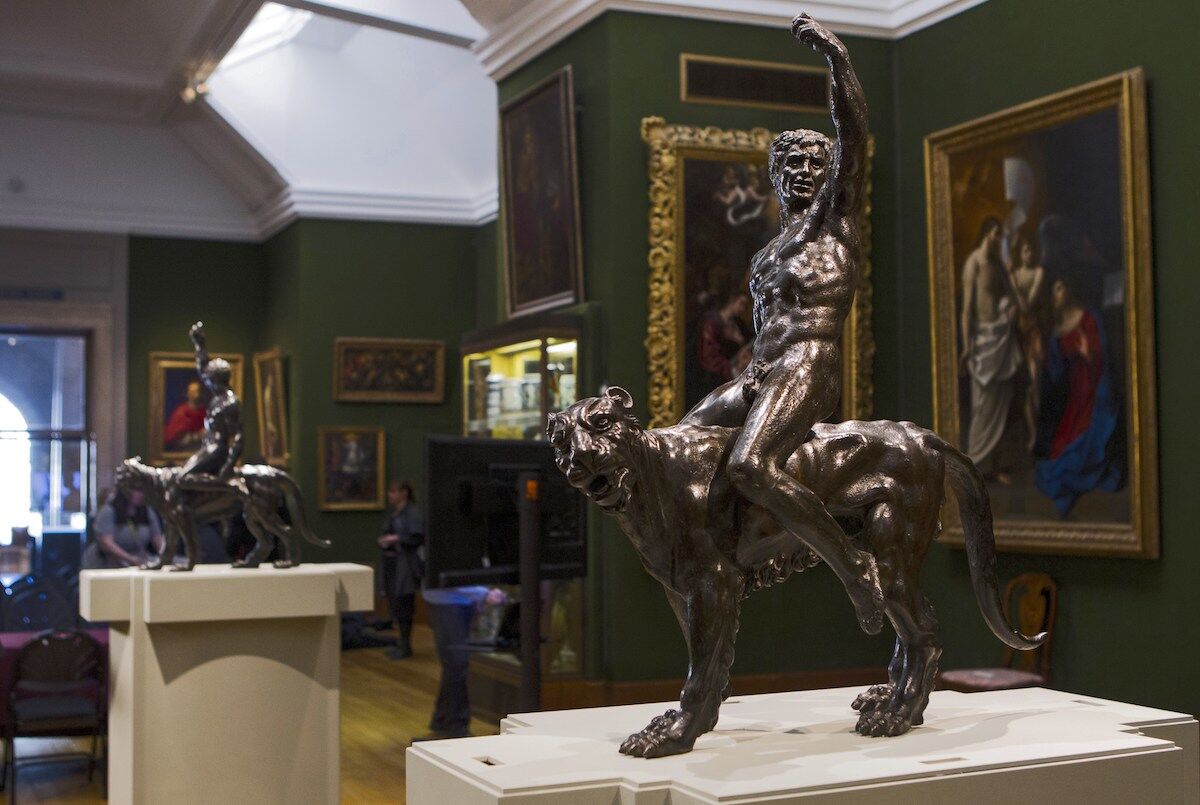 Two bronze statues named Bacchants Riding On Panthers, thought to be by Italian Renaissance master Michelangelo, are displayed at the Fitzwilliam Museum in Cambridge on February 2, 2015. Photo by Jack Taylor/AFP/Getty Images.

It’s no secret that the Renaissance artist Michelangelo was a master of sculpting the well-muscled male form—have you seen the guns on David? In Michelangelo’s mind, even Moses, in a sculpture at the church of San Pietro in Vincoli in Rome, is packing some serious heat.

So it’s not too surprising that, if one has to confirm that two bronzes were made by the hand of Michelangelo, the first things to look for are finely cut eight-pack, or even ten-pack, abs. That’s how an international team lead by the University of Cambridge finally confirmed after four years of research that two bronzes sold at Sotheby’s in 2002 for £1,821,650 with dubious attribution were truly bonafide Michelangelo bronzes—the only known surviving bronzes that he cast. As the BBC put it, these bronzes could now be worth “hundreds of millions.”

And what do the private collectors in London who own these works have to thank for this windfall? The artist’s devotion to portraying male figures as 100% USDA-approved slabs of beefcake awesomeness. The key details to making the call that these are true Michelangelos, said Victoria Avery, Keeper of Applied Arts at the Fitzwilliam Museum, were the “anatomical features which were specific to him”—specifically “an extra tendinous intersection, which is in fact a band of fibrous tissue that converts a six-pack into an eight or a ten-pack.”

The works, which portray two nude men riding panthers while rocking—and I think this bears repeating—ten-pack abs, were also confirmed due to the artist’s habit of giving men bulging thigh and calf muscles. (Thirty letters written to his family around the time of the creation of the works also helped, but that’s not quite as sexy, now is it?)

Hot dudes aside, it’s clear this is a major discovery, and one that sheds new light on a somewhat neglected part of Michelangelo’s practice.

We know the public can be cynical when you have no documentary evidence, but were more likely to believe the science. They are authentic Michelangelo, made when he was at the height of his creative genius, when he was desperate to outdo his contemporaries and dominate every medium on a massive scale.