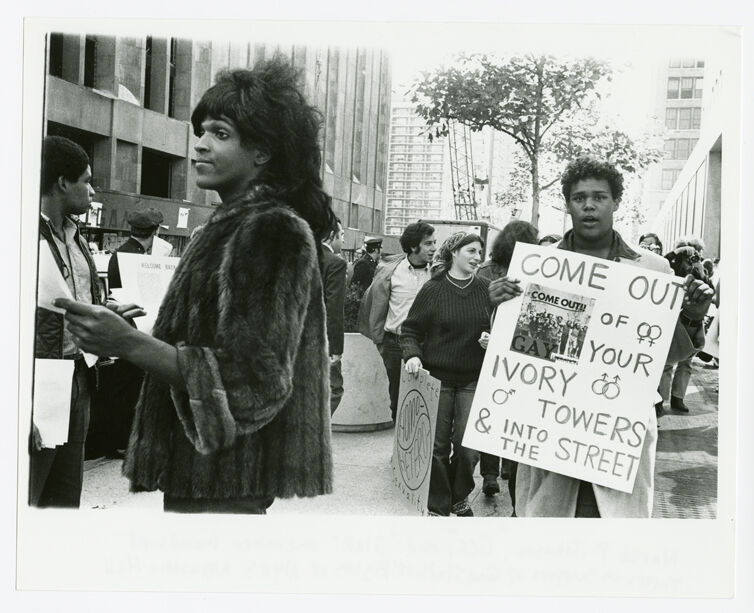 As New York City begins to address the gender and sexuality disparity among its public statuary, it has announced that a monument honoring the transgender activists Marsha P. Johnson and Sylvia Rivera will be erected in Greenwich Village. The monument’s proposed location is the Ruth Wittenberg Triangle, a public space on Sixth Avenue just a short walk from the historic Stonewall Inn. It’s believed that both Johnson and Rivera were major figures in the 1969 Stonewall uprising, and the city’s announcement coincides with the 50th anniversary of this pivotal event in the fight for gay rights.

Johnson was a fierce advocate for the disenfranchised, and she doggedly fought for equality and dedicated her life to fighting for homeless youth who had been ostracized from their families due to their non-traditional sexualities and expressions of gender, and later fought on behalf of AIDS patients.

Marsha P. Johnson could be perceived as the most marginalized of people—black, queer, gender-nonconforming, poor. [. . .] You might expect a person in such a position to be fragile, brutalized, beaten down. Instead, Marsha had this joie de vivre, a capacity to find joy in a world of suffering. She channeled it into political action, and did it with a kind of fierceness, grace and whimsy, with a loopy, absurdist reaction to it all.

Johnson’s life was frequently marked by destitution and homelessness, and in 1992 her body was found in the Hudson River, near the Christopher Street piers. The death was initially ruled a suicide, but was later reclassified as being due to drowning from undetermined causes—the case remains open. She was 46 years old.

Rivera, whom the Village Voice once called the Rosa Parks of the transgender movement, was left to fend for herself in New York City at age 11, and Johnson took Rivera under her wing. Rivera fought to bring trans rights to the forefront of the fight for gay rights, and sought to make the world a safer place for all forms of gender identity. Rivera died of liver cancer in 2002 at the age of 50 after spending much of her life battling substance abuse and without a stable home.

In a 1995 interview, filmed at the West Village pier on which Rivera was living at the time, she gestured to the Hudson River and said: