The New York state legislature has approved the construction of a giant public work by David Hammons. 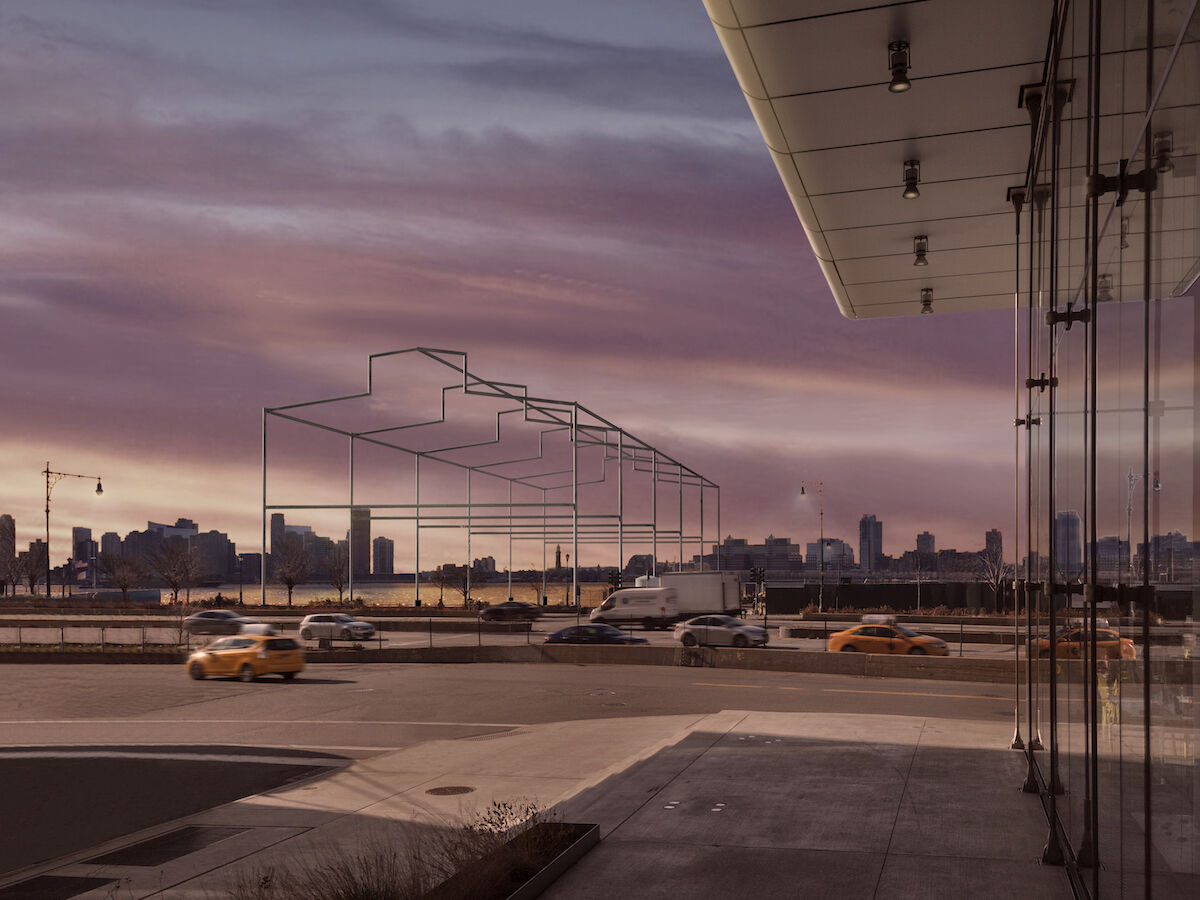 Rendering of the proposed project, Day’s End  by David Hammons, as seen from the Whitney Museum of American Art. Courtesy Guy Nordenson and Associates.

The Hammons work, which will be one of the largest public installations in New York when built on Manhattan’s Pier 52, consists of steel beams that exactly trace the dimensions of the 19th century salt shed that once clung to a spot of land jutting out into the Hudson called Gansevoort Peninsula. The skeletal ghost of the building will extend 325 feet into the river, and rise up to 52 feet. The name of the work is Day’s End, a reference to a 1975 work of the same name by the artist and “anarchitect” Gordon Matta-Clark. The original piece consisted of an intervention in which Matta-Clark bore five small into the walls and ceiling of the then-standing but abandoned rusted industrial salt shed, allowing the light inside to flit across the walls as the day went on, like in a basilica.

The plan for Hammons’s work was announced in October 2017, and some critics such as The New Yorker’s Peter Schjeldahl feared bureaucratic hand-wringing would get in the way of a wondrous new public artwork. But a bill to approve the installation passed unanimously through the New York State Assembly last month, by a vote of 141 to 0. And on Wednesday, the State Senate also passed the legislation, which now heads to New York Governor Andrew Cuomo’s desk for signature or veto.

The work was officially proposed by the Whitney Museum of American Art, located across the street, and the legislation maintains that the museum will shoulder all costs of construction and maintenance. In a story in the New York Times that announced the work, Whitney director Adam Weinberg recalled that Hammons—who is 74, has lived in New York for over four decades, and in Weinberg’s view is “one of the greatest living American artists”—conceived of the work after touring the Whitney’s new Meatpacking District building and staring out the window at its vista of the Hudson. There were no plans to install any kind of work on the plot of land, which is set to become Hudson River Park, but when Hammons sent over a sketch, the Whitney decided to pursue its construction.

At the time of the announcement, some were worried residents would lodge complaints similar to the ones that, just a month earlier, seemed to have torpedoed the plans of media mogul Barry Diller’s to build an ambitious project up the river at Pier 55. (Construction of the project in a different form resumed in April 2018 after Governor Andrew Cuomo intervened.) But Weinberg argued that the work would be a subtle addition to the skyline, barely visible when it’s too bright or too dark. “It will not impose on any uses of the Gansevoort Peninsula—you can still have baseball fields, you can still have park,” he told the Times. “It’s one of the biggest public sculptures in New York, yet takes up almost no mass whatsoever.” With the legislation’s passage, there was no timeline given for its completion, and when it is done, it will be owned by the Hudson River Park Trust.