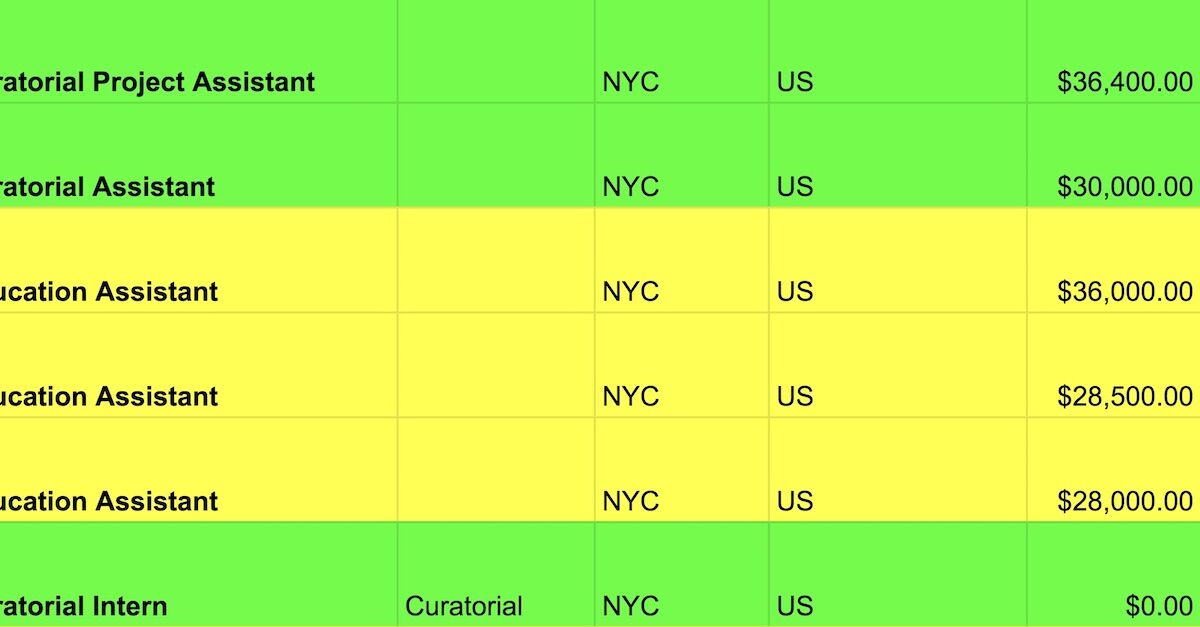 Screenshot by the author via Google Sheets.

On Friday, a Google spreadsheet titled “Arts + All Museums Salary Transparency 2019” began to circulate with staffers at museums, galleries, nonprofits, and artist’s studios anonymously providing information about their compensation. Through a formalized process for contributing new entries through a form, the document features salary information for more than 650 workers—ranging from annual pay for staff and hourly wages for contract workers—to information about benefits, including parental leave, degree requirements, gender and race designations. The spreadsheet brings an unprecedented level of transparency to the art field.

The document now includes compensation information for roles at organizations including the Whitney Museum, Museum of Contemporary Art in Los Angeles, Smithsonian American Art Museum, SFMOMA, New Museum, National Gallery of Art, and the Museum of Modern Art (MoMA). While many of the roles included in the spreadsheet are in curatorial departments, it features salary information for workers in a range of departments, from administration, archives, and publications to education, conservation, and development. As of this writing, the highest salary reported in the spreadsheet is the $330,000 earned by MoMA’s chief curator of prints and illustrated books (a position formerly held by Deborah Wye).

Michelle Millar Fisher, one of the document’s creators and an assistant curator of design and decorative arts at the Philadelphia Museum of Art, told ARTnews she and her colleagues were inspired by a talk by former Metropolitan Museum social media manager Kimberly Drew at last month’s American Alliance of Museums conference. In the talk, Drew disclosed her compensation from organizations including the Met, the gallery Lehmann Maupin, the Studio Museum in Harlem, and the nonprofit Creative Time.

I hope it encourages a conversation between coworkers. [. . .] If you don’t do it, everything stays the same. Sometimes it takes just one tiny action. Solidarity is the only way to affect great change.

Further Reading: Can Only Rich Kids Afford to Work in the Art World?