I.M. Pei, the legendary architect who transformed the Louvre, died at 102. 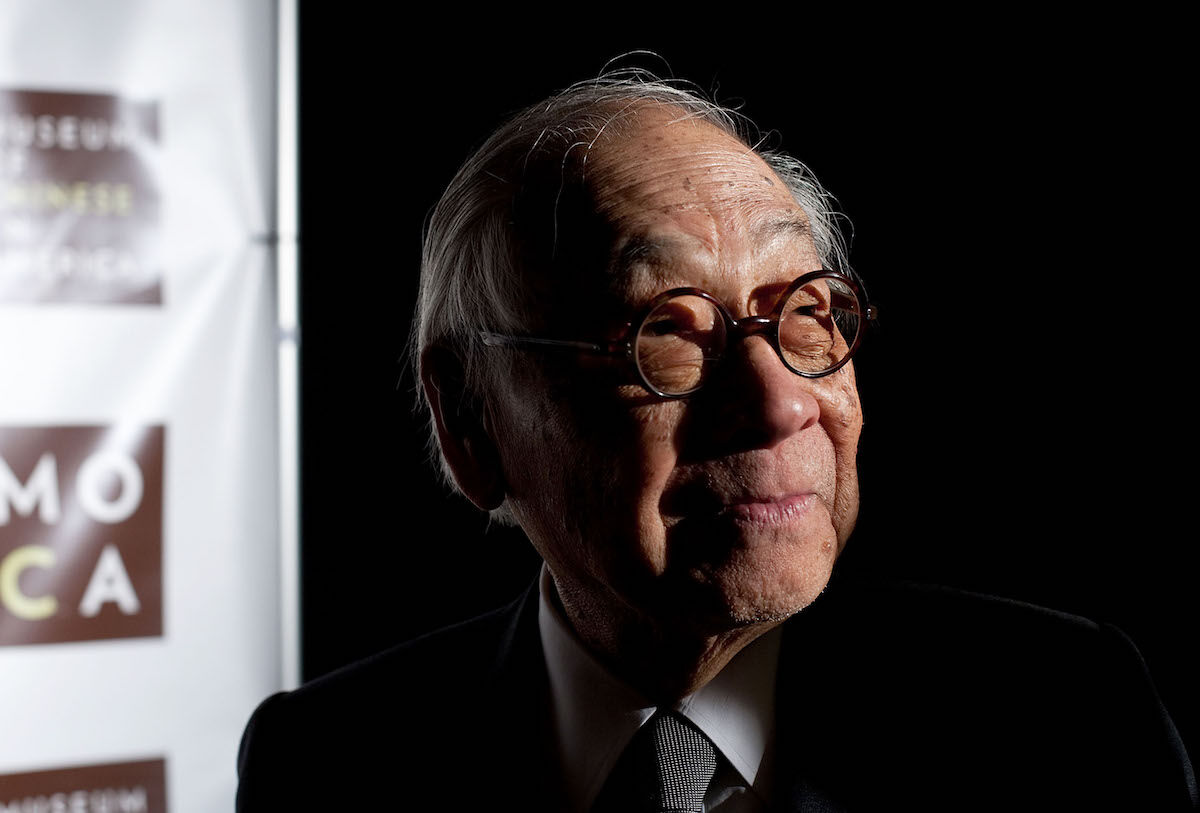 I.M. Pei at a Museum of Chinese in America gala in 2009. Photo by Dario Cantatore/Getty Images.

I.M. Pei, one of the most famous architects of the last century, died on Thursday in New York City at age 102. A committed modernist, he designed buildings characterized by their geometric forms and often-monumental proportions, which nevertheless remain elegant and, at times, even understated. Pei is best known for his many museum projects, which include “Le Grand Louvre”—Pei’s overhaul of Paris’s iconic museum, which brought a soaring glass pyramid to the Palace’s main courtyard—the East Building of the National Gallery of Art in Washington, D.C., the Rock and Roll Hall of Fame in Cleveland, and the Museum of Islamic Art in Doha.
Pei’s built works—executed by the firm he founded in 1955 as I.M. Pei & Associates, later renamed I. M. Pei & Partners, and ultimately Pei Cobb Freed & Partners—include civic projects, commercial buildings, academic and scientific complexes, and more. He was among the class of famous architects to be referred to as a “starchitect,” and left an indelible imprint on the world’s architectural patrimony through his buildings’ distinctive elements, including expansive glass canopies and large stone volumes that give many of them a futuristic, Cubist appearance. 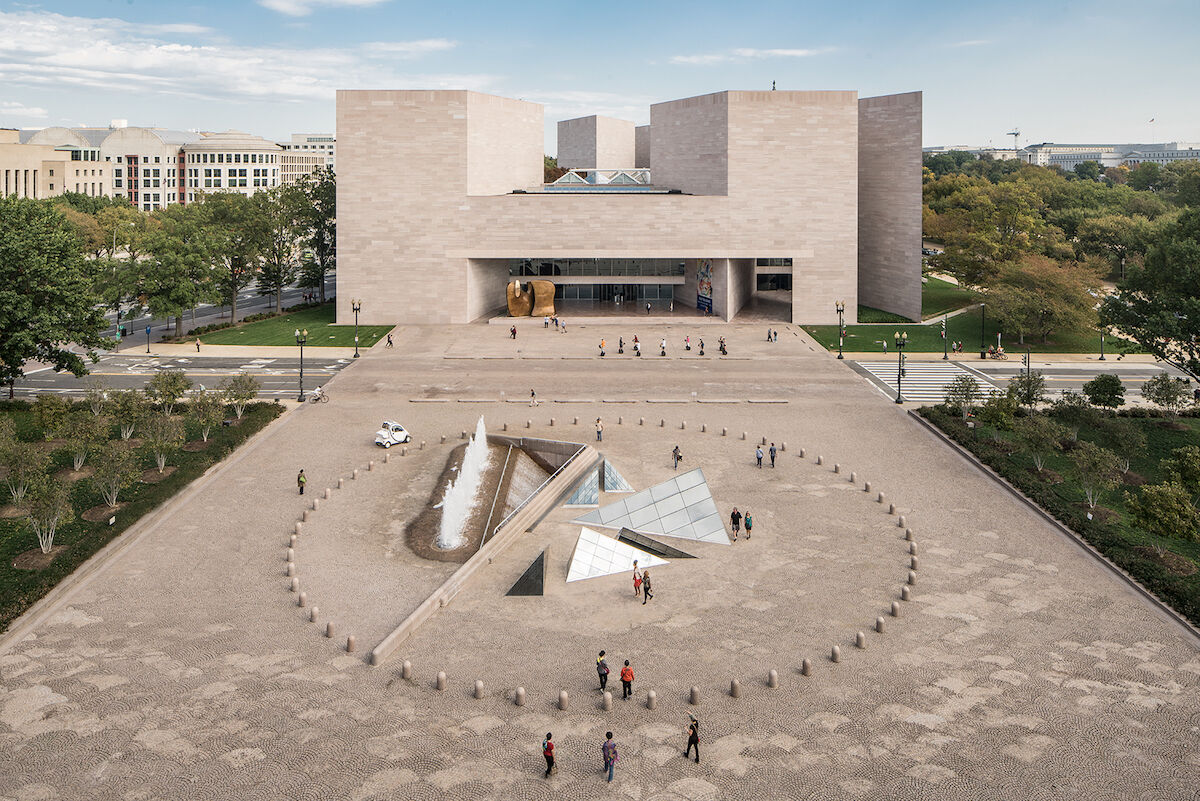 Pei was the fifth architect to receive the discipline’s top honor, the Pritzker Prize, in 1983. At the award ceremony, held in the Metropolitan Museum’s Sackler Wing, he articulated his deeply held belief in the power of modernism while acknowledging the reactions against it:

You may be amused to know, although it was not amusing to me at the time, that a house I designed for a friend in Cambridge in the early forties was denied a mortgage because it looked modern. In this sense I belong to that generation of American architects who built upon the pioneering perceptions of the modern movement, with an unwavering conviction in its significant achievements in the fields of art, technology and design. I am keenly aware of the many banalities built in its name over the years. Nevertheless, I believe in the continuity of this tradition for it is by no means a relic of the past but a living force that animates and informs the present. 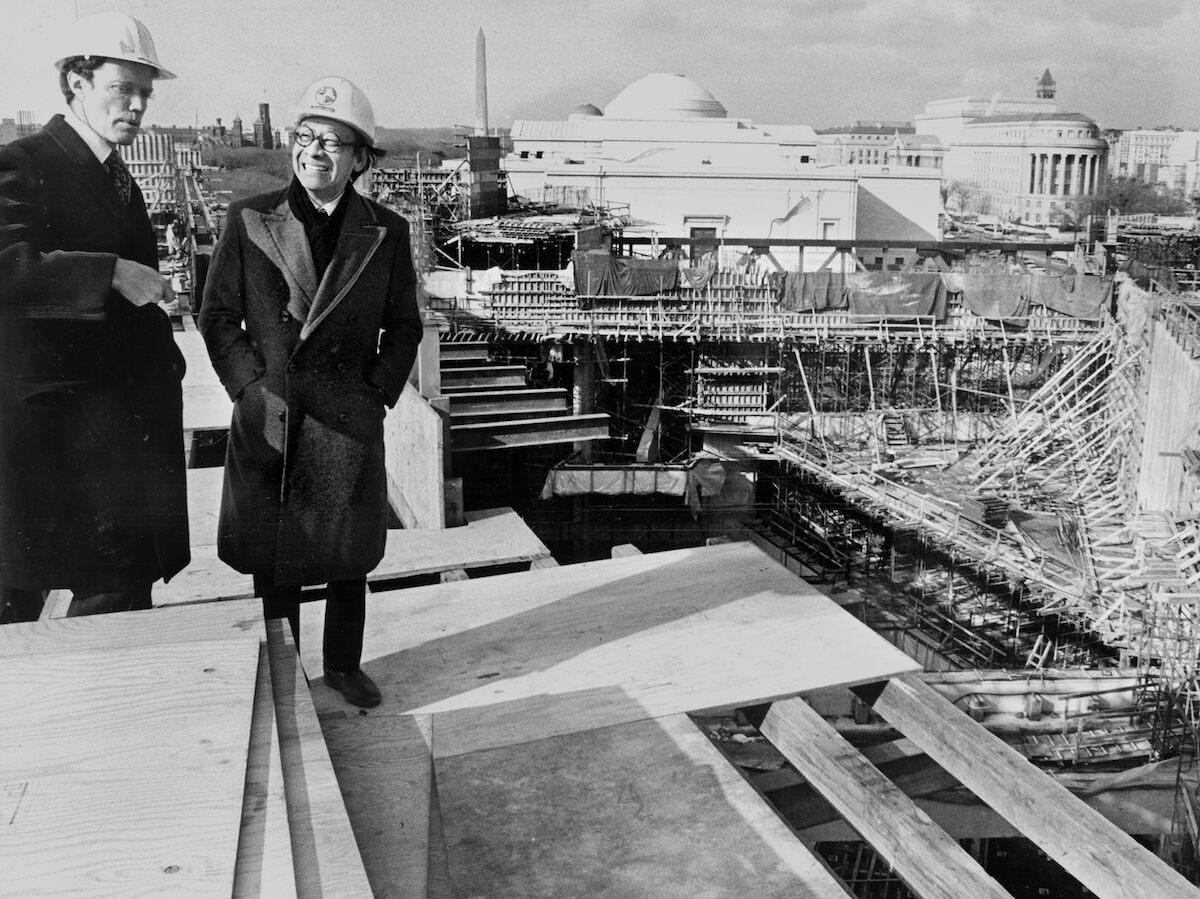 National Gallery Director J. Carter Brown with I. M. Pei on the roof of the new East Building during its construction. Photo by Ellisworth Davisy/The Washington Post via Getty Images.

Ieoh Ming Pei was born in 1917 in Guangzhou, China, and moved to the U.S. at age 17 to study architecture. He earned his bachelor’s degree in 1940 from the Massachusetts Institute of Technology and his master’s in 1946 from Harvard University’s Graduate School of Design, where he remained as an assistant professor for two years. In 1948 he moved to New York City to take a job as the director of architecture with real estate developer Webb & Knapp. There, he met Henry Cobb and Eason Leonard, with whom he formed I.M. Pei & Associates in 1955. The firm’s early projects included New York’s Kips Bay Plaza and Silver Towers, and, in Philadelphia, the Society Hill Towers.
By the late 1960s, Pei had graduated from real estate development projects and was winning and executing major commissions around the country, including the Des Moines Art Center and the Everson Museum of Art in Syracuse, New York, both completed in 1968. Ten years later, his East Building for the National Gallery of Art opened in Washington. The Académie d’Architecture de France awarded him its Grande Médaille d’Or in honor of his transformation of the Louvre. 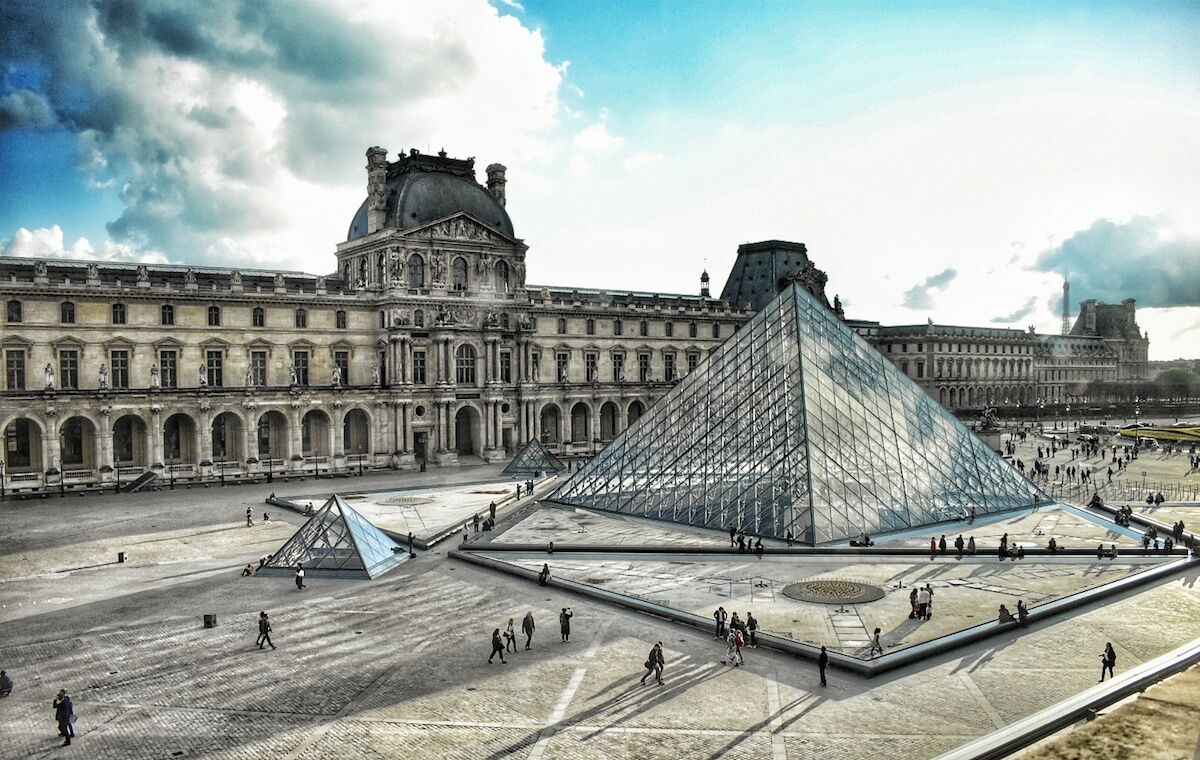 The glass pyramid at the Louvre, designed by I.M. Pei. Photo by Babyaimeesmom, via Wikimedia Commons.

Pei formally retired from his firm in 1990, but stayed on as a collaborator in the ensuing decades on projects that included an expansion of the Deutsches Historisches Museum in Berlin in 2003, the Musée d’Art Moderne of Luxembourg in 2006, and the Museum of Islamic Art, which opened in Qatar in 2008. During this time he also completed the Suzhou Museum—one of only two projects Pei, who became a U.S. citizen in 1954, completed in his native China—which opened in 2006. His Fragrant Hill Hotel in Beijing opened in 1982.
In an interview with New York Times architecture critic Nicolai Ouroussoff at the time of the Museum of Islamic Art’s opening, Pei reaffirmed his commitment to a modern architecture rooted in history, saying:

Contemporary architects tend to impose modernity on something. [. . .] There is a certain concern for history but it’s not very deep. I understand that time has changed, we have evolved. But I don’t want to forget the beginning. A lasting architecture has to have roots. 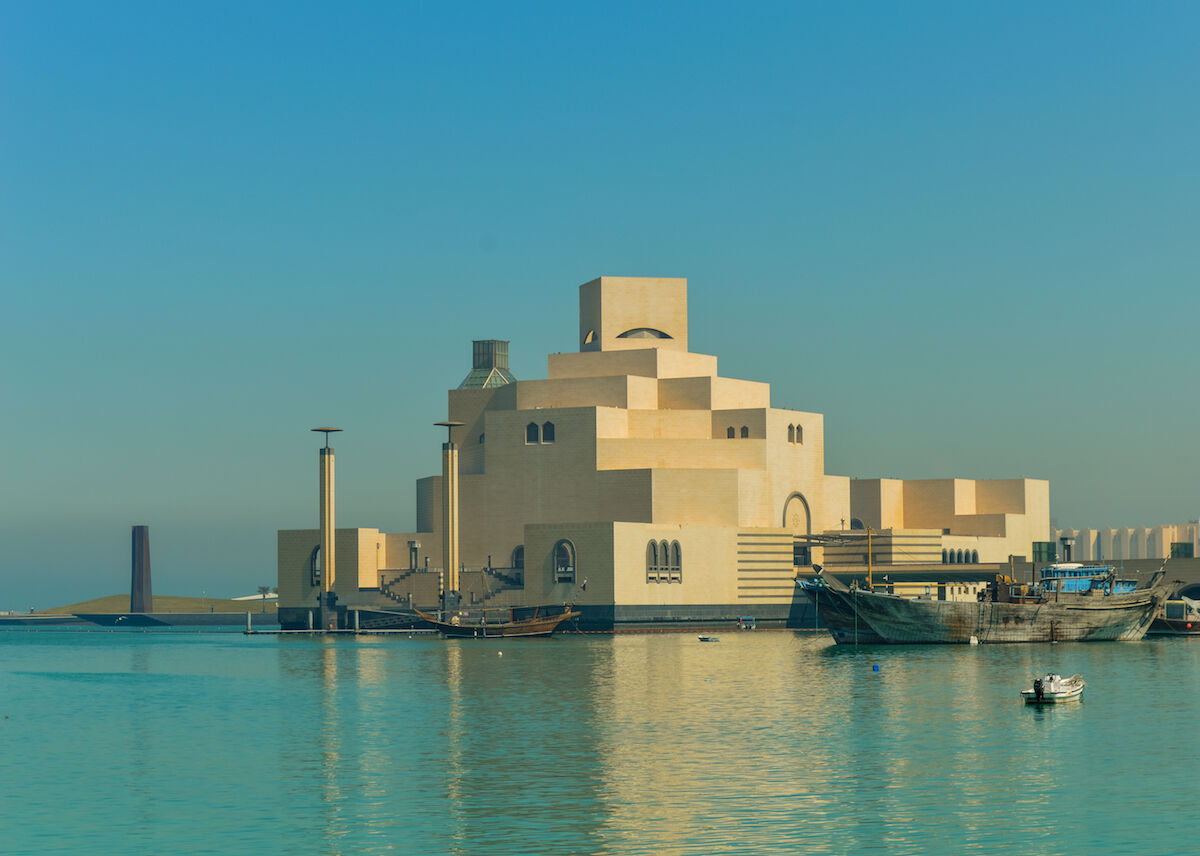 The Museum of Islamic Art in Doha. Photo by Francisco Anzola, via Wikimedia Commons.