Pussy Riot members who ran onto the field during World Cup final in Moscow sentenced to 15 days in jail. 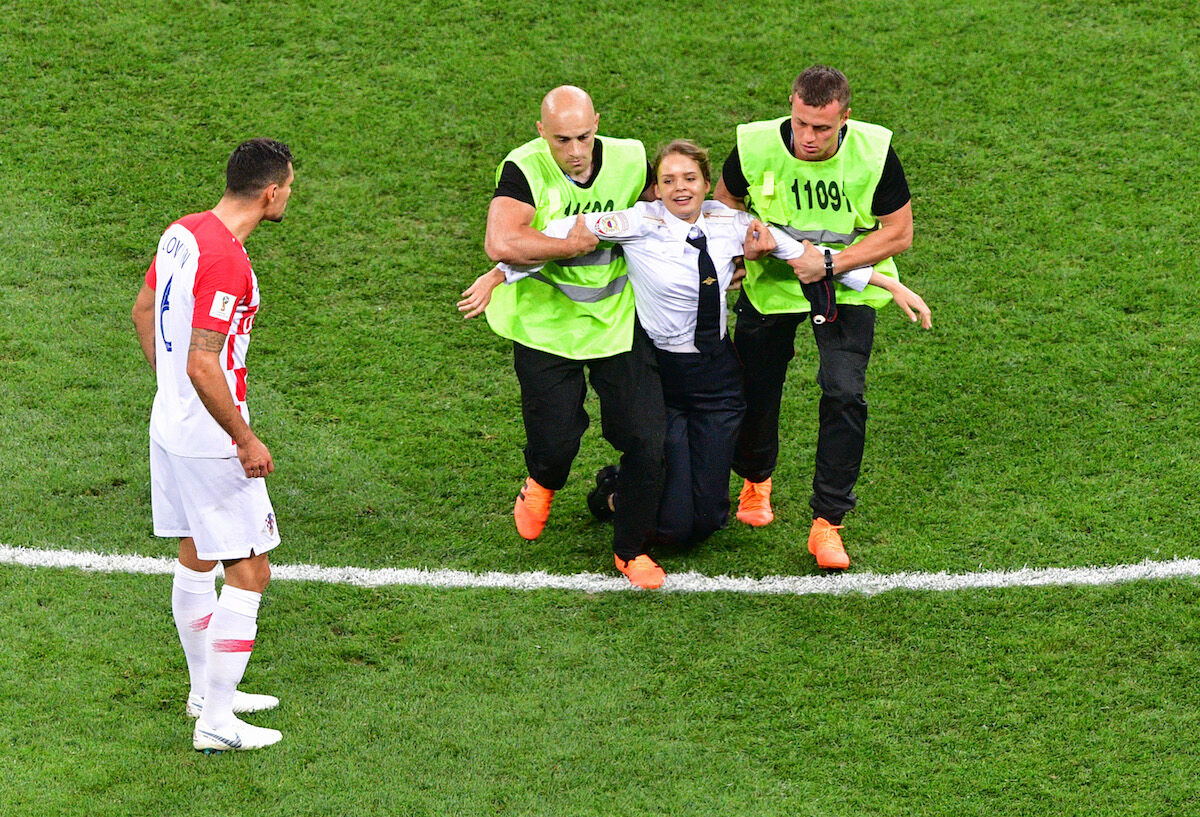 A member of the Russian protest-art group Pussy Riot is removed from the field during the 2018 World Cup final match between France and Croatia at the Luzhniki Stadium in Moscow on July 15, 2018. Photo by Mladen Antonov/AFP/Getty Images.

The four members of punk art collective Pussy Riot who ran onto the field during Sunday’s World Cup final to raise awareness of Russia’s human rights abuses have been sentenced to 15 days in jail. The protesters stormed the field at Moscow’s Luzhniki Stadium dressed in police uniforms at the 52nd minute of the showdown between Croatia and France, briefly interrupting the game before security agents carried them away. On Monday, a court found all four protesters guilty of violating laws governing spectators’ behavior at sports events; they have also been banned from attending sporting events for three years.

Following Sunday’s stunt, Pussy Riot’s official social media channels distributed a message explaining the creative impetus for the action, which was intended as a tribute to Russian dissident artist and poet Dmitri Prigov and titled “Policeman enters the Game.” Today, the group released a new song and video, “Track About Good Cop,” which features dancers in police and military uniforms. The song, which is a dance-y departure from Pussy Riot’s typical punk fodder, includes lyrics like “cops are kissing under the clouds” and “mom, I don’t like correctional service.” It is accompanied by a list of demands similar to the one the collective released on Sunday—including “Don’t put people in jail for likes and reposts” and “Stop mass arrests at political rallies”—and calling for the release of the participants in the World Cup stunt.

Russia’s ruling on the latest Pussy Riot protest performance coincides with the European Court of Human Rights’s reproachful assessment of how Moscow handled the group’s infamous 2012 “punk prayer” performance and its aftermath. Today, the court, which is based in Strasbourg and enforces the European Convention on Human Rights, ordered Russia to pay €48,760 ($57,000) in judicial fees and damages. In its ruling, as Reuters reported, it found that “sentencing [members of Pussy Riot] to imprisonment for simply having worn brightly colored clothes, waved their arms and kicked their legs around and used strong language, without analyzing the lyrics of their song or the context of their performance, had been exceptionally severe.”