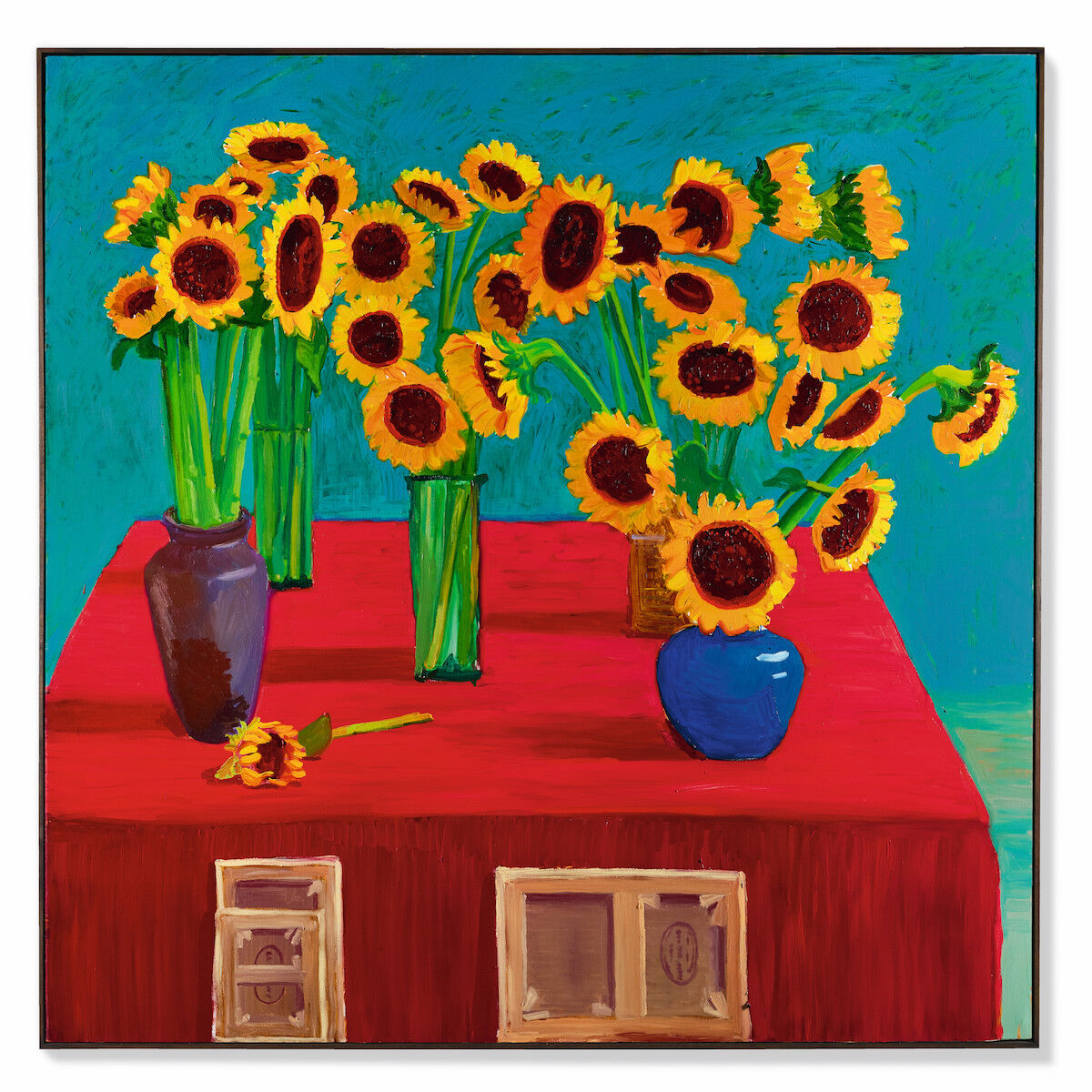 Sotheby’s is continuing to tap into the market’s fervor for David Hockney paintings, lining up one of his flower paintings from the 1990s for its April sales in Hong Kong. The large canvas, 30 Sunflowers (1996), has been given a pre-sale estimate in excess of HK$80 million (US$10.3 million). It will be the star lot of Sotheby’s contemporary art evening sale on April 6th.

The last time 30 Sunflowers appeared at auction, at a Phillips sale in New York in 2011, it sold for $2.5 million. In the intervening years, Hockney’s market value has steadily grown, reaching its apex in 2018, when the British artist briefly became the most expensive living artist at auction with the sale of his iconic pool painting, Portrait of an Artist (Pool with Two Figures) (1972), for $90.3 million at Christie’s (a title Jeff Koons reclaimed the following year). Sotheby’s is betting big on Hockney this auction season: Not only will he be the star of the house’s Hong Kong evening sale in April, he is also headlining its upcoming evening sale in London, where The Splash (1966) is expected to bring between £20 million and £30 million ($26.1 million–$39.2 million) on February 11th.

It’s become quite evident that interest for Hockney is strong in Asia. About 30 percent of our clients buying Hockney’s work are from Asia, and we’ve seen Asian interest in Western contemporary art steadily grow. We first introduced Western art to our contemporary sales in Hong Kong in 2017, and as of last year, there was a 50/50 split between Western and Asian art in our sales.

Terase added that 30 Sunflowers, with its bold palette and its evocation of Vincent van Gogh’s iconic still life paintings of sunflowers, “ticks all the boxes that excite Asian clients.” Despite its colorful imagery, the painting has a darker side as well. Hockney has said he “always painted flowers for friends who were ill,” and shortly before creating this painting several of his close friends died, including the painter Sandra Fisher and the curator (and subject of one of his famous double portraits) Henry Geldzahler. He created 25 flower paintings in all, but only two at the 72-by-72-inch scale of the one that will be offered at Sotheby’s.

Asked if the auction house was concerned about the possible impact of the coronavirus outbreak—which has sparked calls for the cancelation of Art Basel in Hong Kong, currently scheduled for next month—on upcoming sales, Terase noted that Sotheby’s previous round of evening auctions in Hong Kong in October coincided with major pro-democracy demonstrations just outside the auction house. She said:

Foot traffic was down 50 percent, and yet we had our biggest sale ever, and we saw a major jump in bidding from mainland China. I’m not saying we won’t be affected—our first concern is the health and safety of our employees and our clients—but based on our experience in October, we believe that as long as we have strong lots being offered, our clients will show up.