The world’s oldest figurative art has been discovered in caves in Borneo. 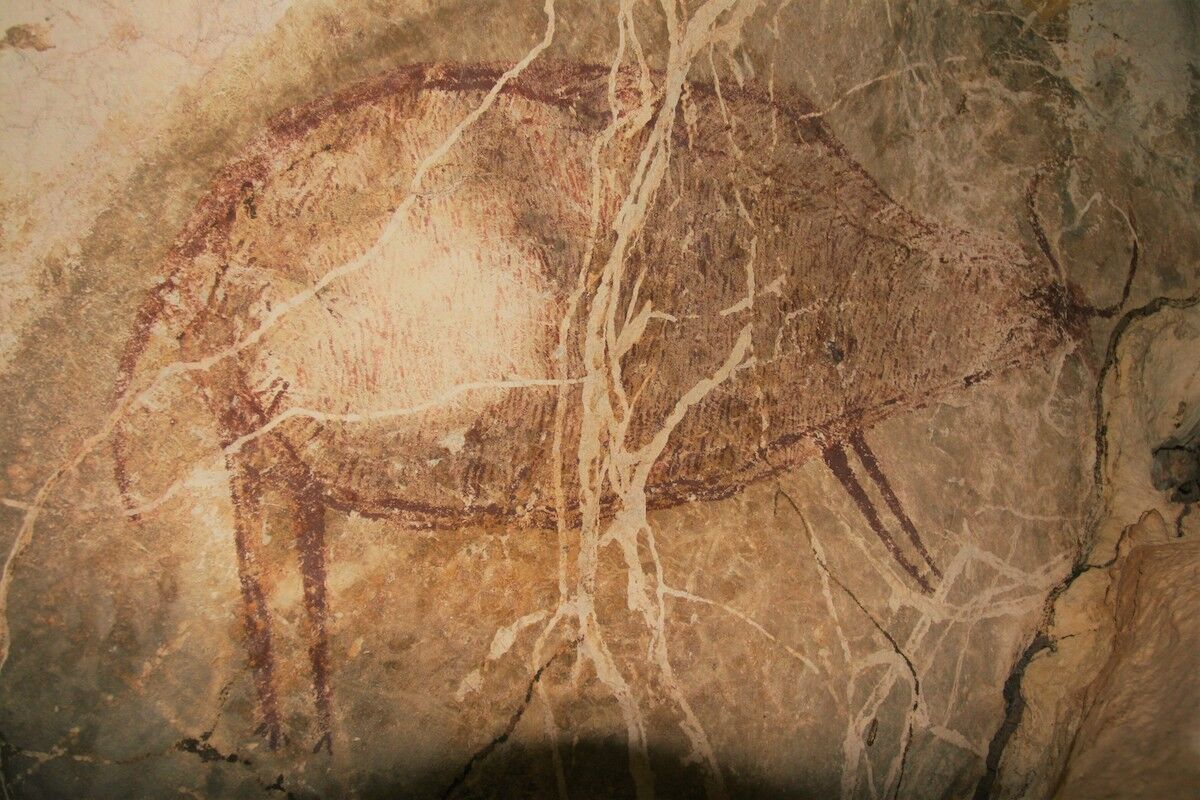 A cave painting of a banteng, believed to be at least 40,000 years old, in a cave in East Kalimantan. Photo © Pindi Setiawan.

A group of cave paintings in East Kalimantan, in the Indonesian part of the island of Borneo, depicting a group of local cattle, has been dated to at least 40,000 years ago by researchers who believe the paintings are the oldest figurative art in the world. The limestone caves’ ancient images include painted outlines of human hands, a human figure, and what appear to be renderings of wild cattle, including an animal similar to the banteng, a large bovine mammal still found in the region.

Previous analysis of the East Kalimantan cave paintings suggested they were only 10,000 years old, but new research published in Nature on November 7th, supports a much earlier, Paleolithic-era dating. The findings complicate the commonly held belief that cave art originated in Europe. In their Nature article, the Australian-Indonesian research team writes:

It is now evident that rock art emerges in Borneo at around the same time as the earliest forms of artistic expression appear in Europe in association with the arrival of modern humans [...] . Thus, similar cave art traditions appear to arise near-contemporaneously in the extreme west and extreme east of Eurasia. Whether this is a coincidence, the result of cultural convergence in widely separated regions, large-scale migrations of a distinct Eurasian population or another cause remains unknown.

The researchers found evidence of several distinct eras of cave painting in the East Kalimantan, including the 40,000-year-old images of animals, outlines of human hands from 52,000 to 40,000 years ago, more recent decorated hand stencils believed to be 21,000 to 20,000 years old, and a painting of a human figure that is at least 13,600 years old. 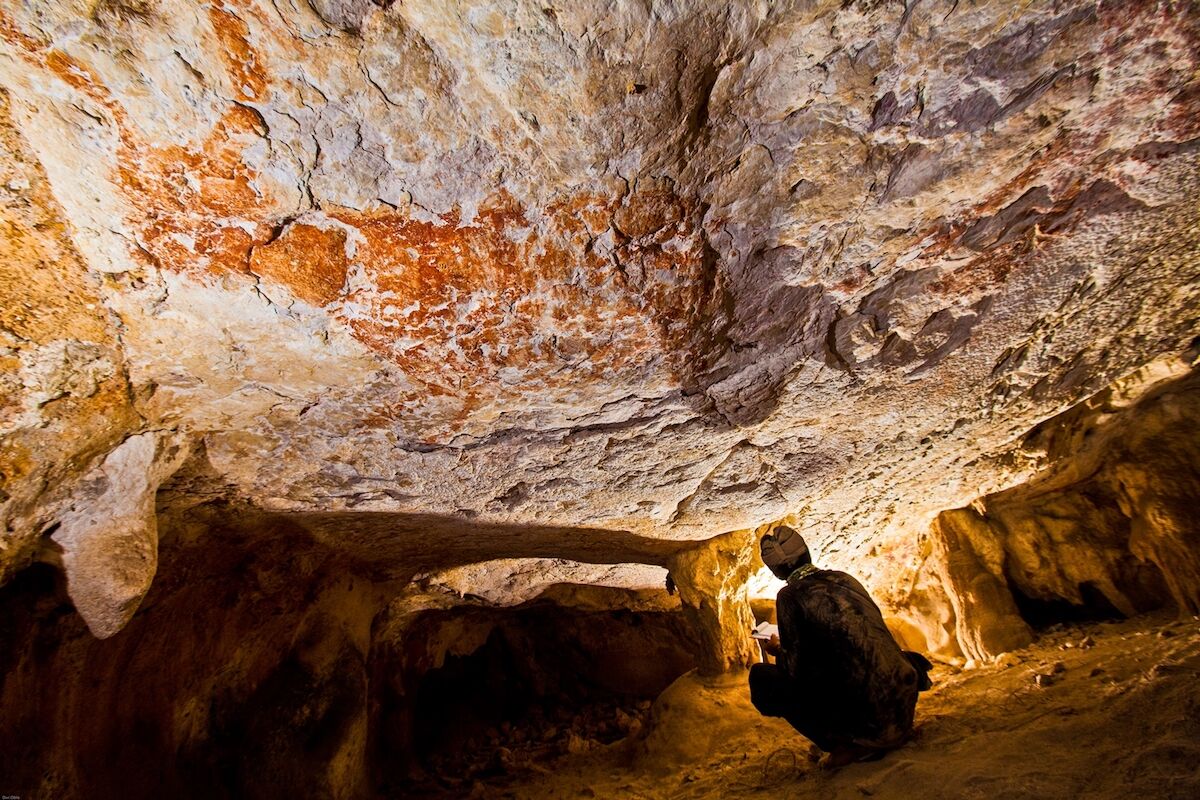 Researchers explore a cave in East Kalimantan where what is believed to be the oldest figurative art in the world is located. Photo © Pindi Setiawan. 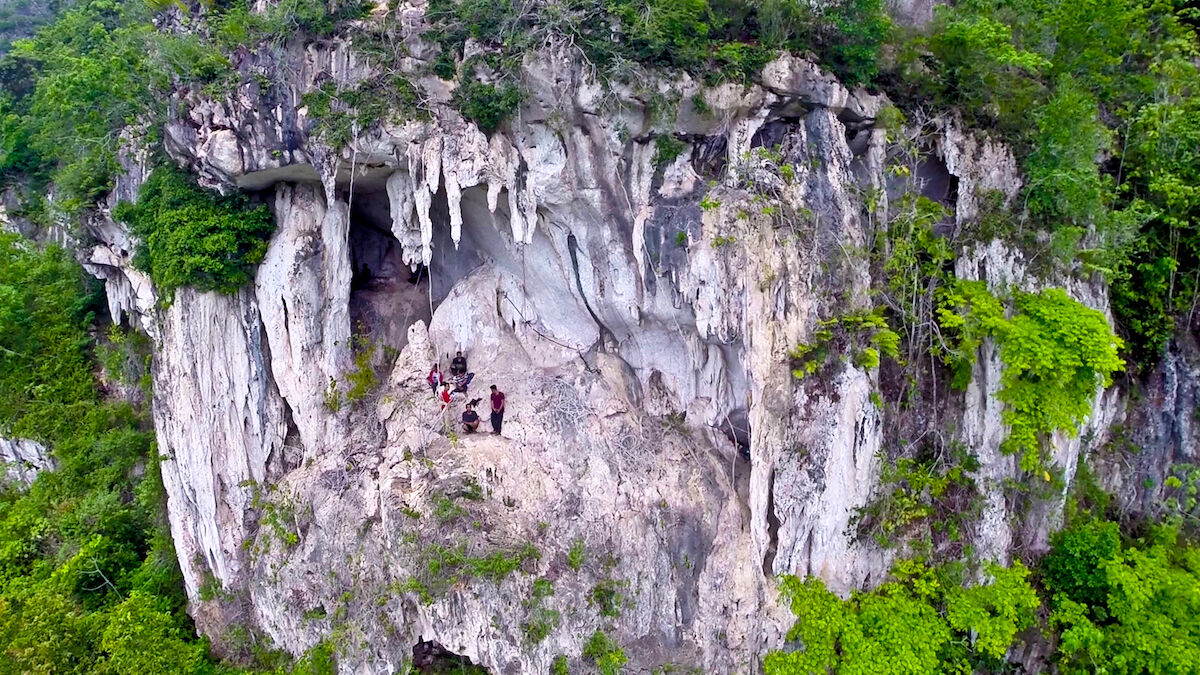 The exterior of a cave in East Kalimantan, Indonesia, holding what are believed to b the oldest cave paintings in the world. Photo © Pindi Setiawan.