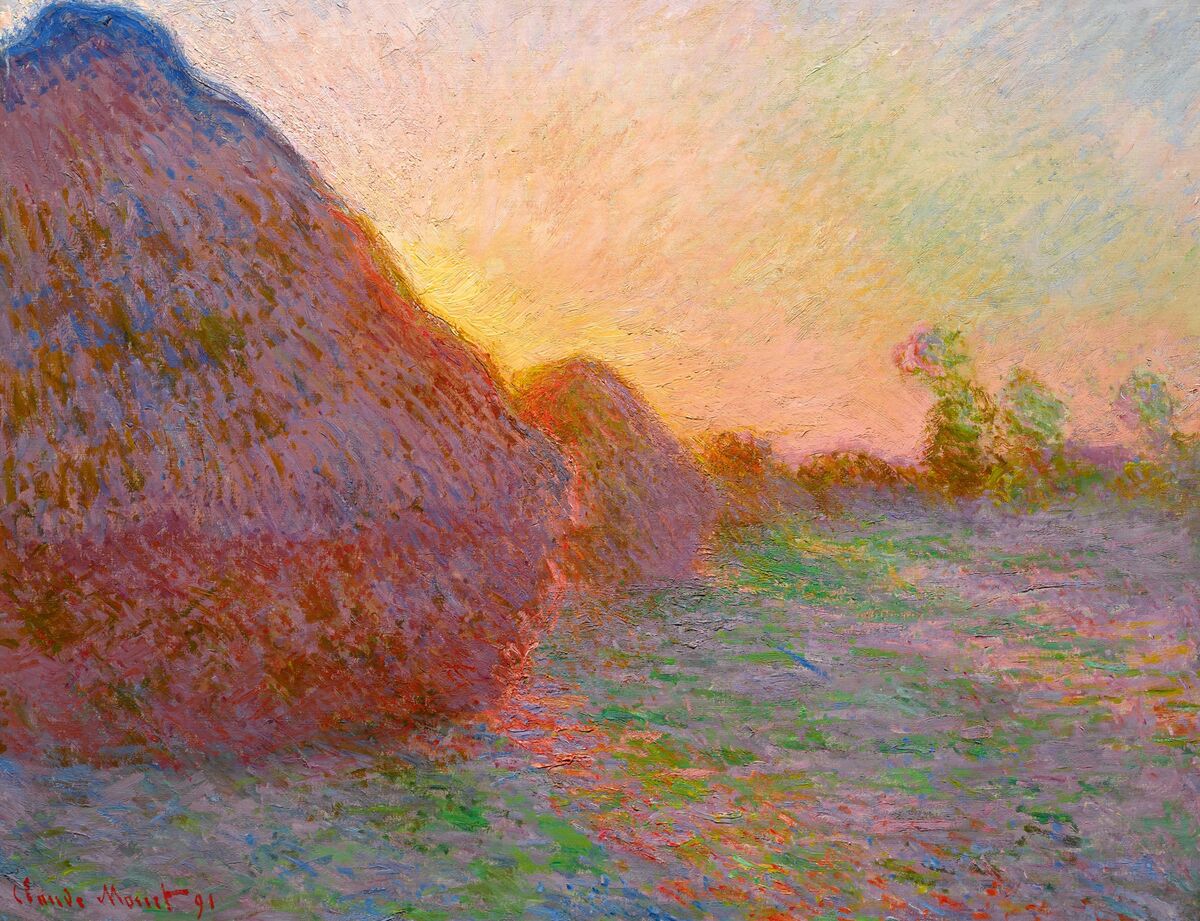 Claude Monet
’s series “Les Meules”—alternately translated as “The Grainstacks” or “The Haystacks”—both glorifies a humble staple of rural life and enjoys worldwide acclaim. From 1889 through 1891, the French
Impressionist
captured the lumpy stacks (possibly of wheat, oats, or barley) sitting just outside his door in the village of Giverny in northern France. Painting the same objects in different months, at various times of day, Monet made light into his true subject.
In all, Monet created 25 “Meules,” which significantly vary in composition and palette. Some feature two full stacks; others just one, truncated by the picture’s edge. Snowy landscapes and long, blue shadows alternate with verdant surroundings full of green trees and lush grass. “Each picture is a masterpiece of beauty, truth, and form,” art theorist Wynford Dewhurst crowed in his 1904 volume Impressionist Painting, Its Genesis and Development. “The influence of such creations is world-wide.” On May 14th, a prominent example will go to auction with an estimate in excess of $55 million at Sotheby’s Impressionist and modern art evening sale in New York. 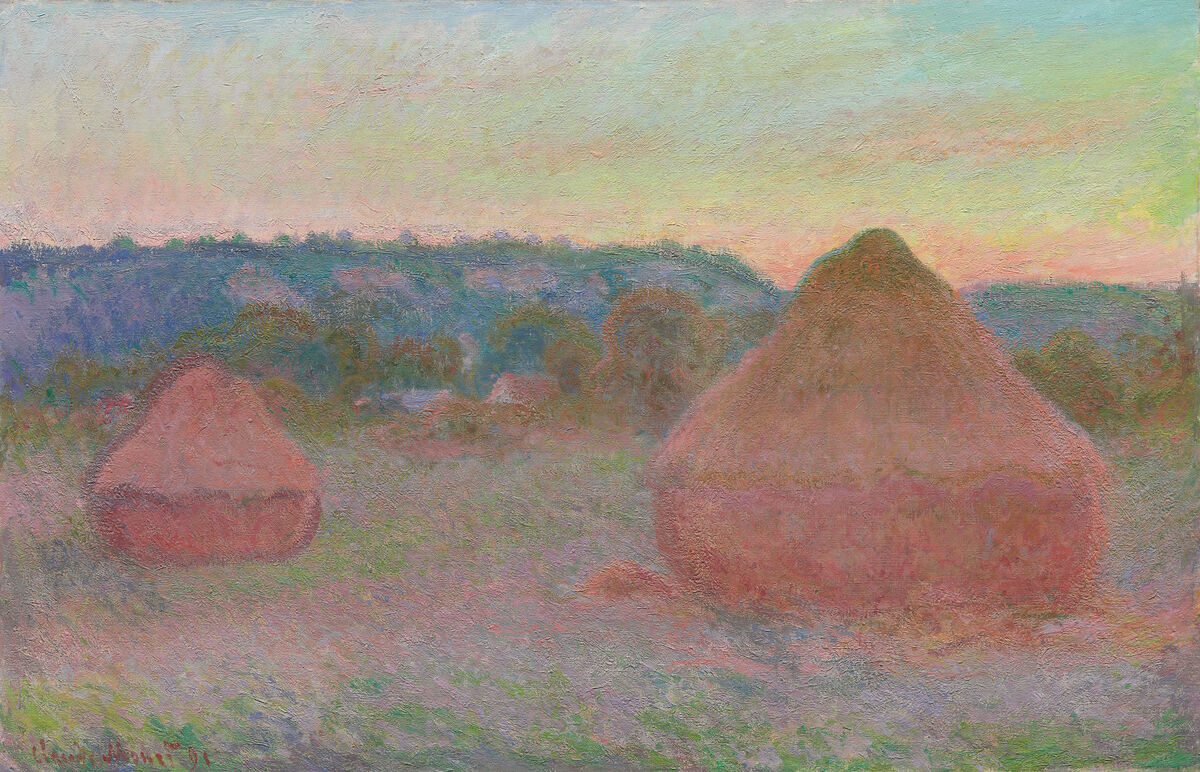 Claude Monet, Stacks of Wheat (End of Day, Autumn), 1890/91. Courtesy of the Art Institute of Chicago.

While the sale proves, once again, just how prized the individual “Meules” are, their art-historical importance lies in their serial aspect. After years of working on one scene at a time—a seascape, a luncheon, or a snow-covered fence, for example—Monet opted for a new, long-term project. Over the course of around two years, he’d make longitudinal study of the subject matter lurking in his own yard. Notably, he began his canvases while painting en plein air and finished them in his studio: As an Impressionist, effect was more important than realism. Later, he’d famously repeat the serial process as he fixated on the cathedral in Rouen, the waterlilies in his garden, and London’s Houses of Parliament. The Sotheby’s buyer won’t only be paying for a lush painting of a haystack, but for a symbol of a hallowed artist just discovering his dominant mode.
Within Monet’s larger series of “Meules,” August Uribe, head of Sotheby’s Impressionist and modern art department, unsurprisingly rallies for the singularity of the painting he’s selling. “It’s the best one,” he said. The example on offer, Meules (1890), features a large stack protruding into the composition from the painting’s left side. The sun beams out from the stack’s right edge, creating a curved red line that extends into the grass toward the viewer, who’s looking at the object from its shaded portion. The haystack’s hues—blue at the top, purple in the middle, red at the bottom—signify the subtle gradations created by the natural lighting. Another haystack peeps from beyond the central subject, and lumpy, colorful masses in the distance lead the viewer’s eye out to the painting’s right edge. The stacks create a dividing line between brushy pink sky and soft purple earth. The work is quite obviously concerned with beauty, which no doubt makes it an easy sell. 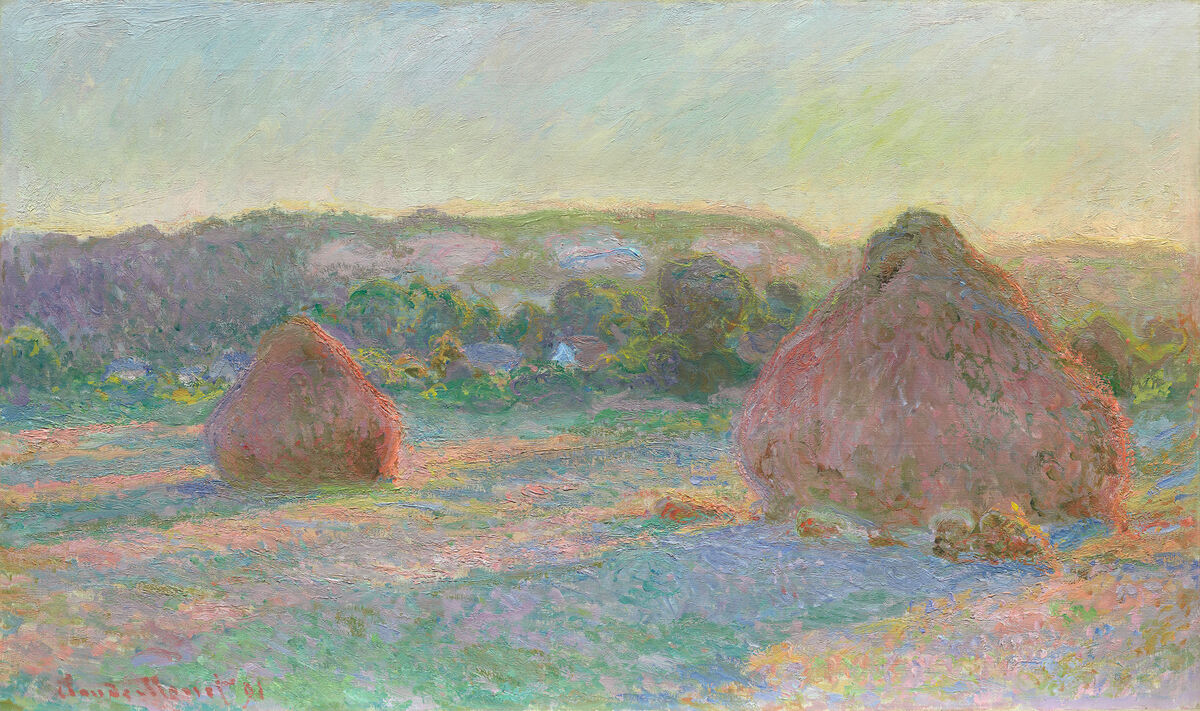 Claude Monet, Stacks of Wheat (End of Summer), 1890/91. Courtesy of the Art Institute of Chicago.

Advertisement
In addition to its sunny vibrancy and grand dimensions—at 28.6 by 36.5 inches, this is one of Monet’s three largest haystacks—the painting’s esteemed provenance also contributes to its multimillion dollar value. Monet’s gallerist, the legendary dealer Paul Durand-Ruel, first exhibited Meules in May 1891: The work on offer may have been one of 15 works from the series included in a larger presentation of Monet’s work.
Angelica Daneo, the Denver Art Museum’s chief curator, calls Durand-Ruel’s show “groundbreaking.” This fall, three “Meules” paintings will be on view at the museum, where Daneo is organizing the major exhibition “Claude Monet: The Truth of Nature.” Although French artists (including Monet) had worked serially before, depicting sequential events such as the four seasons or the months of the year, this was the first time that Monet considered that “[his paintings’] marriage and value would be because of their display as a group, as a series,” Daneo said. Fellow Impressionist
Camille Pissarro
praised the way the series could “breathe contentedly”; just years later, he’d paint his own haystacks. Like Pissarro, both critics and collectors were immediately enamored with Monet’s series.
“In the history of modern art, it is hard to point to other paintings as revolutionary that have been accepted so easily by critics and collectors alike as were the Haystacks,” art historian Richard Brettell wrote in 1984. He asserted that many of the “Meules” paintings on view sold within a month of the opening, and all but one or two of them (including examples not exhibited as part of the show) had sold by the end of 1891. 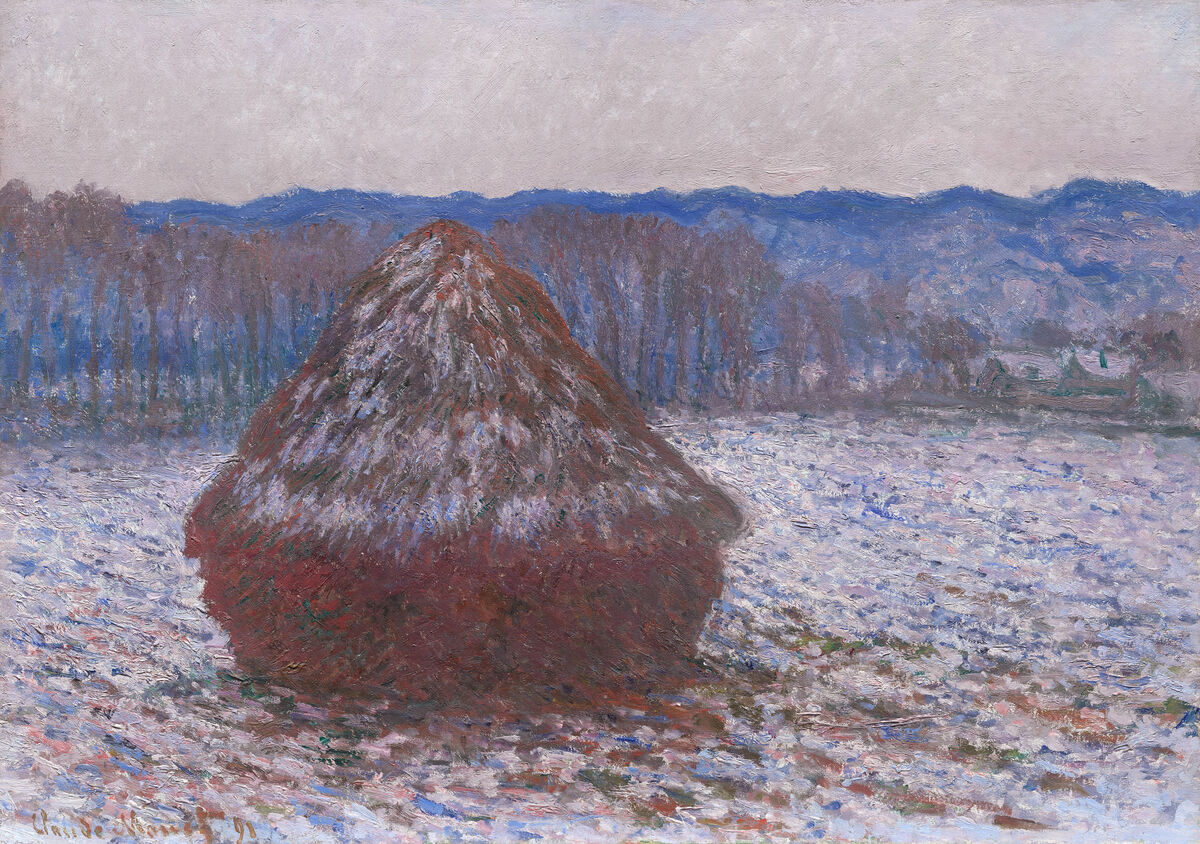 Claude Monet, Stack of Wheat, 1890/91. Courtesy of the Art Institute of Chicago.

Durand-Ruel sold eight “Meules” paintings (including the one coming to auction at Sotheby’s) to major Chicago collector Bertha Potter Palmer. She loved the series so much—and was so mindful of its potential resale value—that she bought a ninth canvas from the Bostonian dealer Charles Fairchilds. Throughout the course of her life, Palmer amassed over 90 artworks by Monet, along with paintings by Pissarro,
Edgar Degas
,
Pierre-Auguste Renoir
, and other luminaries of her day. Though Palmer gave Durand-Ruel the painting back on consignment the following year, she quickly changed her mind—“this painting was so near and dear to her,” said Uribe.
Brettell noted that within three years, Palmer had already sold three of the “Meules.” She was apparently at least as driven by profit as she was by aesthetic interest. Yet Brettell didn’t fault her for this. “That her aims were unabashedly capitalist should neither surprise nor repel us,” he wrote. “After all, Monet’s garden became larger and more extraordinary as Mrs. Palmer made more and more money from—and for—the artist.” In other words, he contended that Palmer’s early sales of the “Meules” paintings helped Monet build the setting for perhaps his best-loved series, the “Water Lilies,” which sustained his artistic interest for decades and up until his death in 1926.
In 1893, Palmer built onto The Castle—as her mansion in the Windy City’s Gold Coast neighborhood was known—a picture gallery where she most likely hung her Monets. Crowds paraded through the gallery during that year’s World’s Columbian Exposition. (For the festivities, Palmer also invented the brownie.) The Meules now on offer at Sotheby’s stayed in the family until 1986, when one of Palmer’s heirs sold it at auction for $2.5 million. 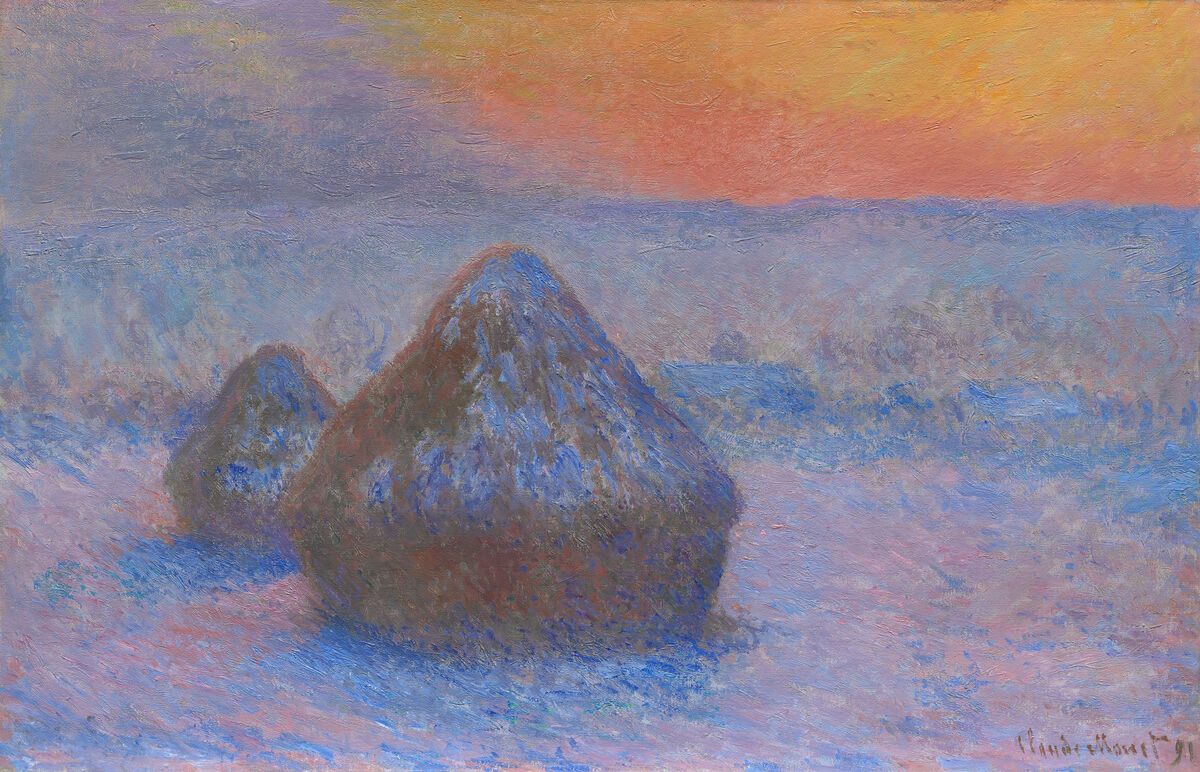 Palmer had already given one to the Art Institute of Chicago in 1922, as part of her bequest. By 1933, the institution owned two additional “Meules” from other American collectors of Impressionism: the Ryerson and Coburn families. The three significant paintings helped form the core of the Institute’s famed Impressionist holdings (cue the scene from Ferris Bueller’s Day Off, 1986, in which one “Meules” painting hangs in the background). In the 1980s, the Institute purchased another painting from the series, and the Palmers and a different private donor gifted the museum one more each: The Chicago collection of Monet’s “Meules”—the largest in the world—now numbered six.
Today, institutional “Meules” owners span the globe, from the National Gallery of Australia to the National Gallery of Scotland, the Musée d’Orsay in Paris to the Minneapolis Institute of Arts. Only 8 of the 25 works in the series remain in private collections. Gloria Groom, chair of European painting and sculpture at the Art Institute of Chicago, stressed that these works were the first-ever sustained and successful series. 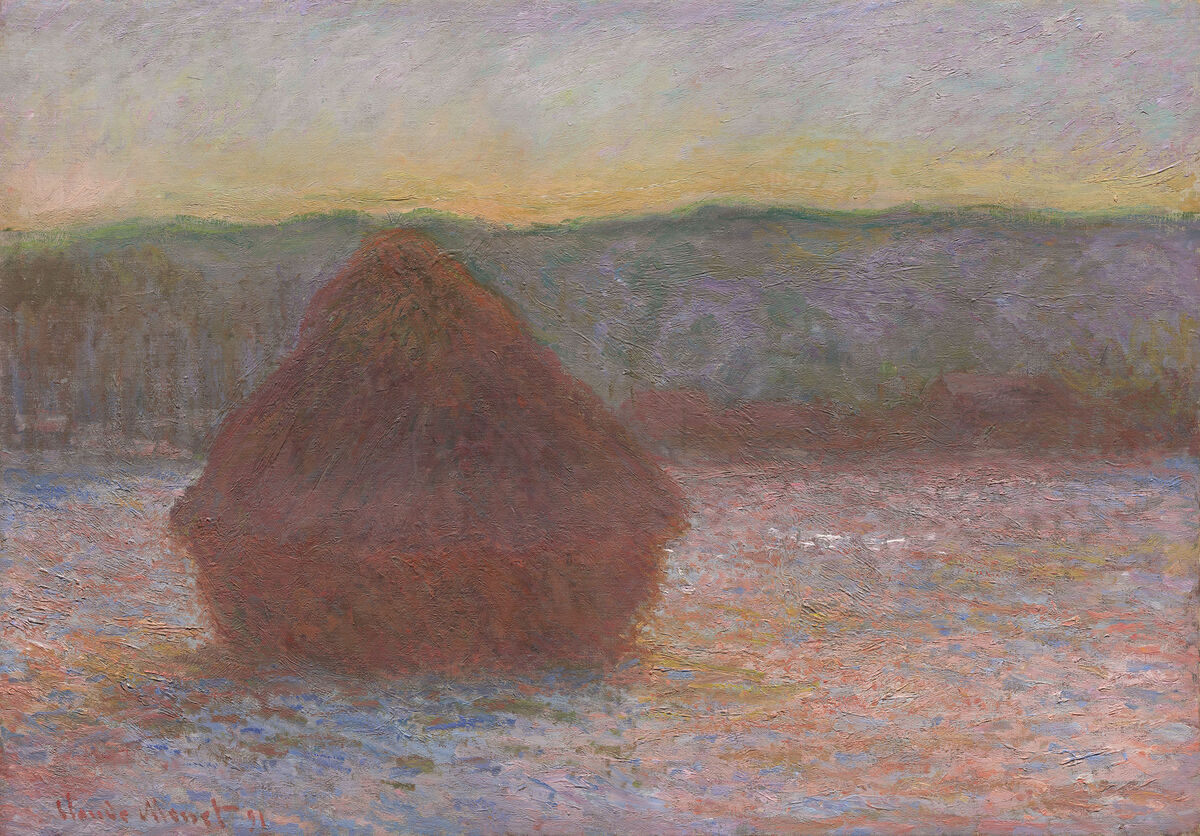 “The fact that Monet conceived them individually from nature and then reworked them in his studio so that they would work as an ensemble, as a whole, and gain meaning from being shown in that way was a very new direction for art,” she said.
To arrive at Sotheby’s current estimate (nearly 22 times the painting’s last auction result), Uribe and his team assessed recent auction records. A “Meules” painting was last sold at auction in 2016 at Christie’s, to a private buyer, for $81.4 million. Three other “Meules” paintings made between 1889 and 1891 have sold in the past 20 years: one for £10.1 million ($14.3 million) in 2001 at Sotheby’s in London; another for $6.6 million at what was then Phillips, de Pury & Luxembourg in New York, also in 2001; and a third for just under $12 million at Sotheby’s in New York in 1999. 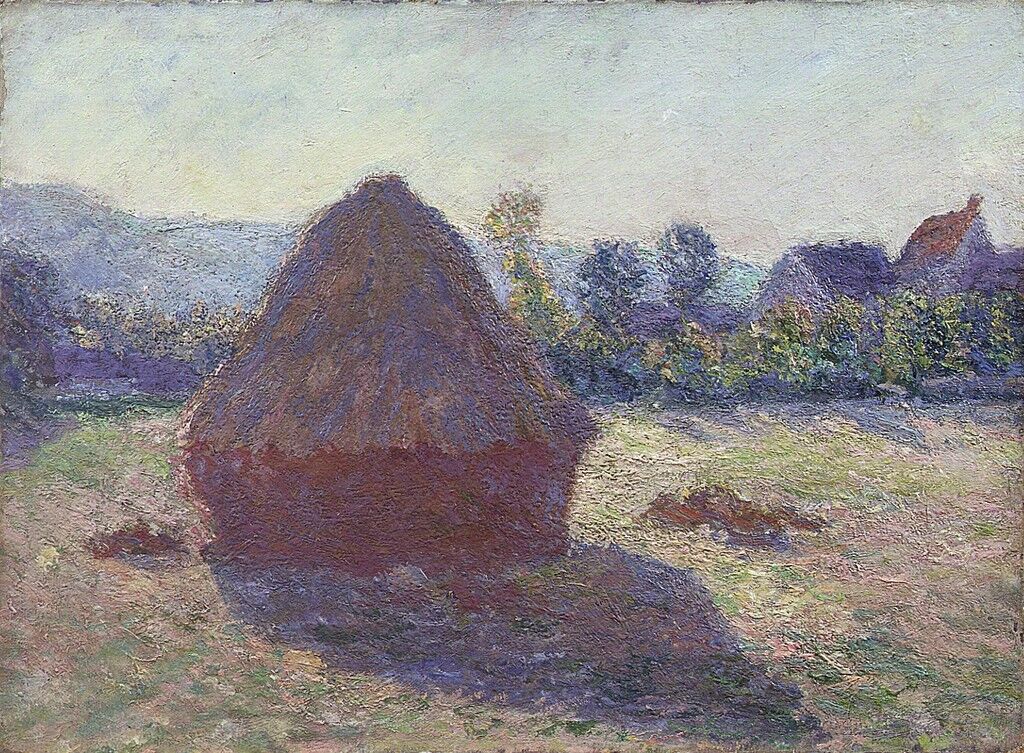 Claude Monet
Haystack in the evening, 1891
"Monet - Lost in Translation" at ARoS Aarhus Museum of Art, Aarhus
“We came to an agreement with the seller,” Uribe explained. “We think the pricing strategy which we’ve put forward is the best one, which reflects not only the importance of the work, which will get the attention of important buyers and will promote healthy bidding.”
Daneo, for her part, offered a different rationale for the haystack paintings’ enormous prices. “These paintings are important to understand the evolution of French art, the transition from the 19th to 20th century,” she said. “[Toward the end of Monet’s lifetime,] there’s a pull towards abstraction that of course he will not quite completely realize, but the generation after obviously look at this particular series. He was extremely influential.”
Alina Cohen

Corrections: A previous version of this article stated that the work on offer was one of 15 “Meules” Durand-Ruel showed in 1891. It additionally stated that in 1986, only one Meule work remained in the Potter Palmer family. Neither of these facts could be confirmed and were removed from the article.