The Most Iconic Artists of the 1980s 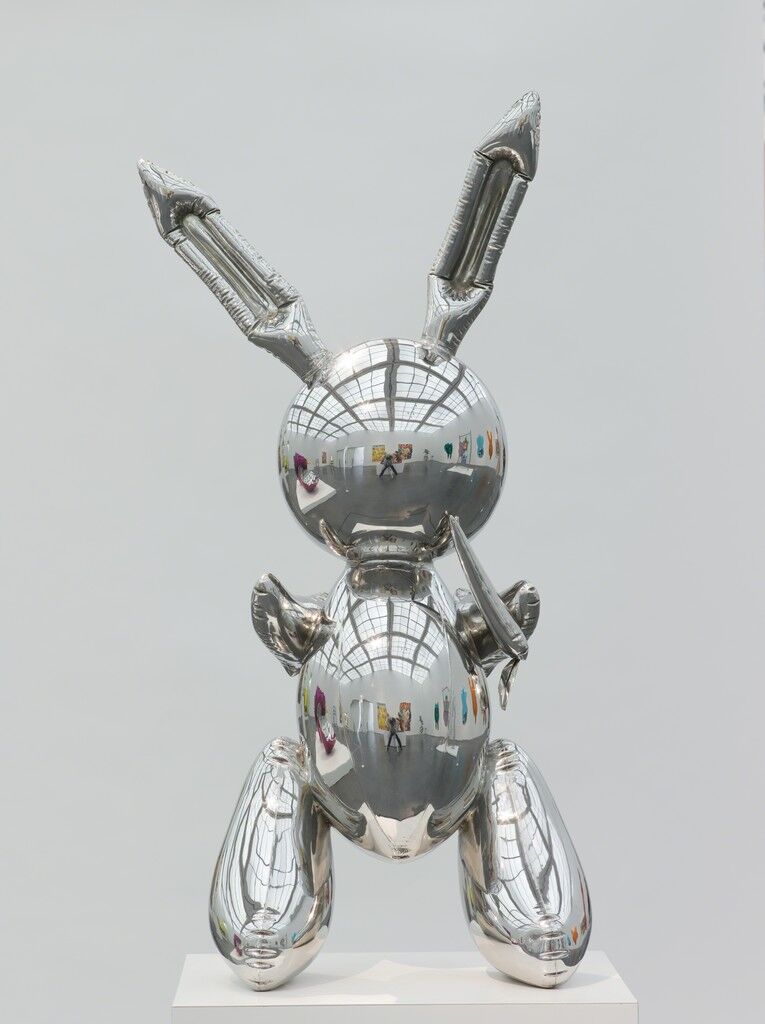 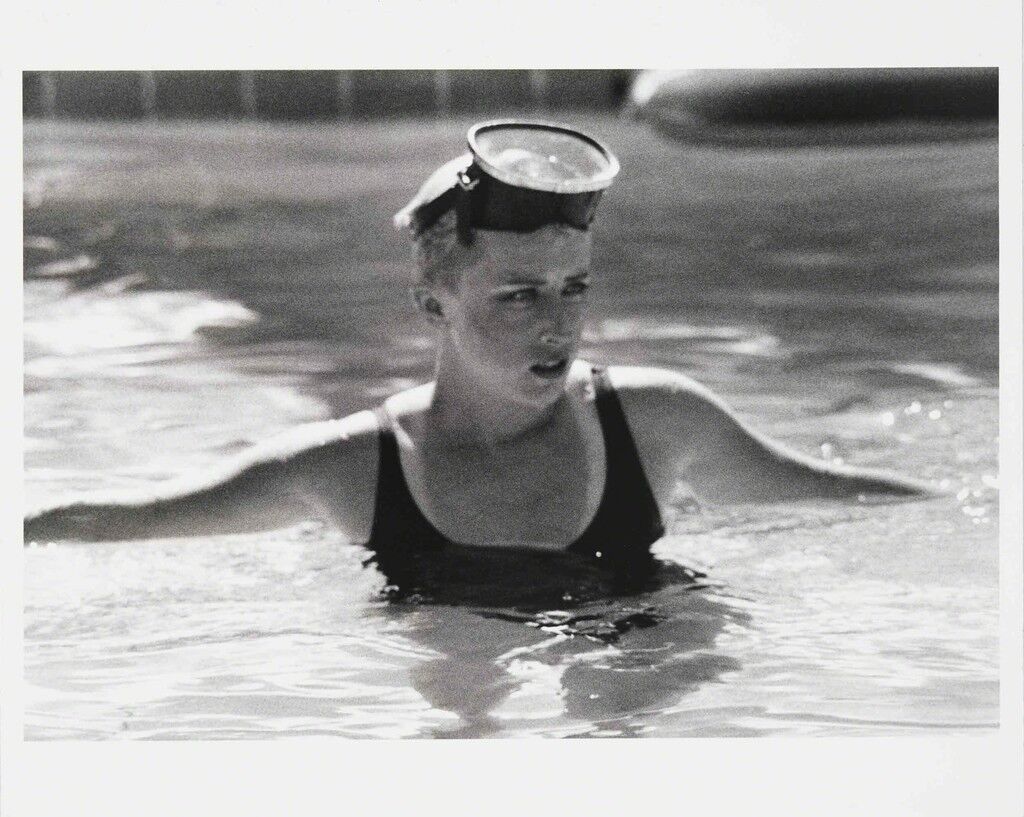 Cindy Sherman
Untitled Film Still #45, 1979
"America is Hard to See," at Whitney Museum of American Art, New York (2015)
The 1980s was a decade of meteoric growth, both for the global economic system and for the art world that swung in its orbit. Cocaine, MTV, the personal computer, the collapse of state-sponsored socialism: these were heady times for the neoliberal regimes installed in Deng Xiaoping’s China, Margaret Thatcher’s Great Britain, and Ronald Reagan’s United States.
In this atmosphere of accelerating modernization, everything began to serve the interest of profit. Whether the modernism peddled by art critic Clement Greenberg was dead or just demoded remained a topic of debate, but imagery of any kind could now be repurposed for the auction block. In his landmark 1984 text Postmodernism, or, the Cultural Logic of Late Capitalism, American critic Frederic Jameson neatly summarized the spirit of the age. So long, grand historical narratives, his text announced; hello, consumerist desire.
As one of the most desirable and symbolic commodities, art slid easily into bed with business. Galleries multiplied in the established centers of Basel, New York, Paris, Cologne, and Düsseldorf, while new art fairs and biennials blossomed in Chicago, Stockholm, Madrid, Amsterdam, London, and Milan.
Artistic strategies to navigating this new marketplace, however, were more ambivalent. They can be slotted into two primary positions:
Neo-Conceptualism
, which grew from Minimalism and Conceptualism to embrace techniques of photography and appropriation; and
Neo-Expressionism
, which exhumed the traditional notions of painting that had been stamped out by Modernism—only to represent them as a corpse. 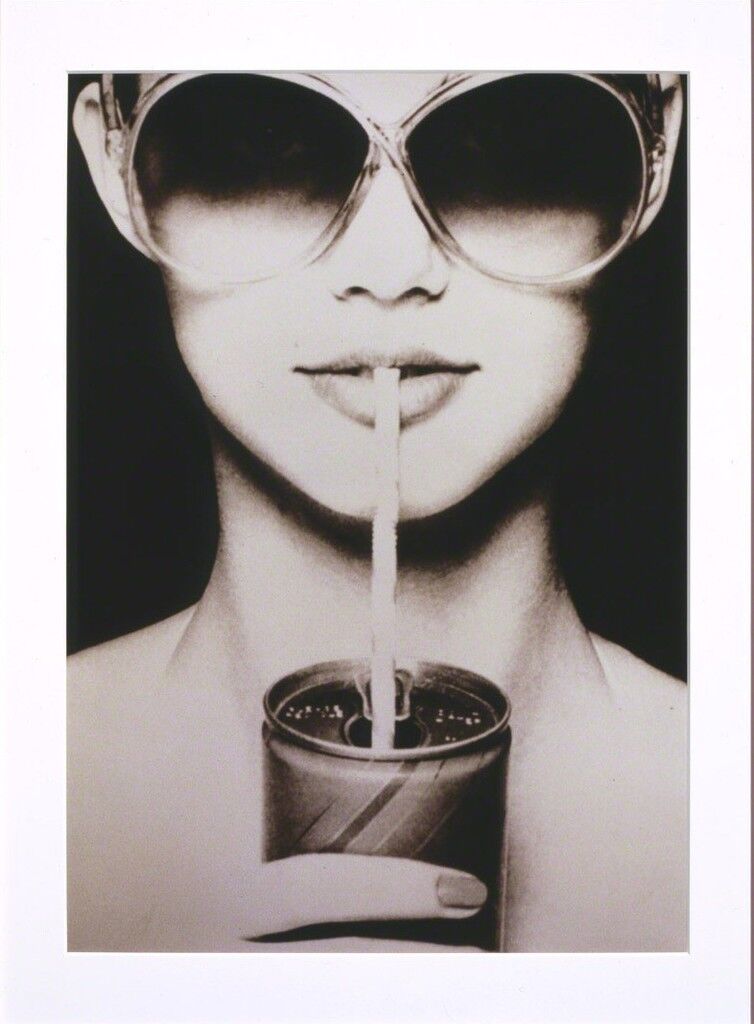 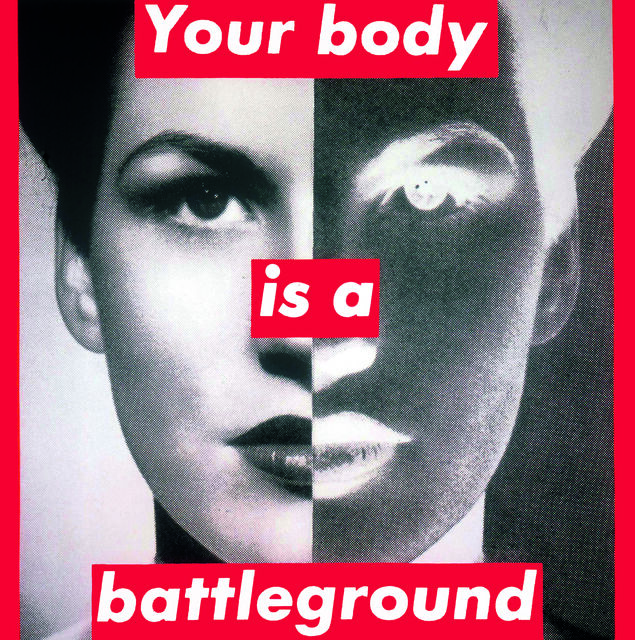 Barbara Kruger
Untitled (Your body is a battleground), 1989
"The Inaugural Installation" at The Broad, Los Angeles
Bridging the late ’70s and early ’80s, the Pictures Generation—named for an important exhibition of their work held in 1977 at Artists Space in New York—characterized the Neo-Conceptualist gambit. Artists like
Barbara Kruger
,
Cindy Sherman
,
Sarah Charlesworth
, and
Sherrie Levine
were not photographers per se; they culled and modified existing photographs to reveal the consumerist and paternalistic ideologies that produced the images in the first place.
Kruger’s Untitled (When I hear the word culture I take out my checkbook) from 1985 presents its critique while skipping between humor and horror. The screwball face of the familiar puppet Howdy Doody (along with small text at lower right ventriloquizing “We mouth your words”) may seem at worst a comically unsettling black-and-white picture. But upon discovering the source of the text angled across the frame—a riff on a line from a play by the Nazi-era sympathizer Hans Johst, “Whenever I hear the word ‘Culture,’ I reach for my revolver”—the work begins to feel more like a ransom note. An
appropriation
in which an image is copied and repurposed, the poster-sized silver gelatin print sold for nearly a million dollars at auction in 2011, rendering its irony complete.
Through a series of 69 photographic self portraits, Sherman’s “Untitled Film Stills” interrogates the image of female stereotypes in popular culture. While the artist may resist the reception of this work as an exploration of identity politics, it stands as one of the most playful and simultaneously trenchant reimaginations of photography as a medium.
Richard Prince
demonstrated the important legacy of
Marcel Duchamp
’s concept of the “readymade”—taking found objects as art—for the Pictures Generation. Along with rephotographed magazine advertisements, one of his most infamous works is Spiritual America (1985). Taking the name from
Alfred Stieglitz
’s 1923 photograph of a castrated horse, Prince rephotographed a controversial image of Brooke Shields—naked, glistening, and 10 years old at the time. 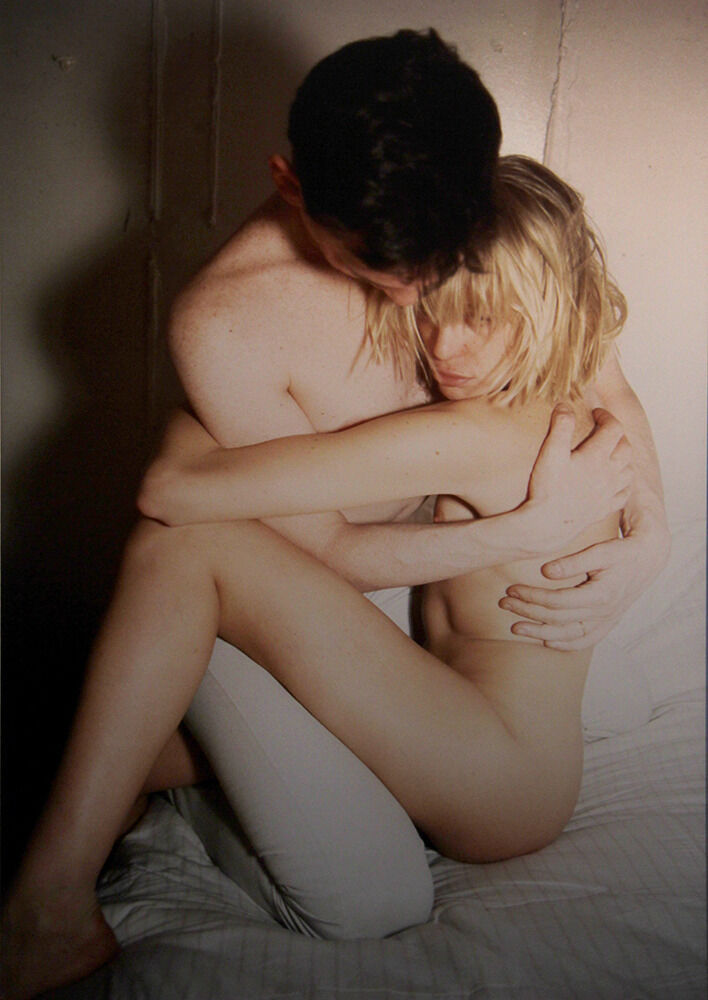 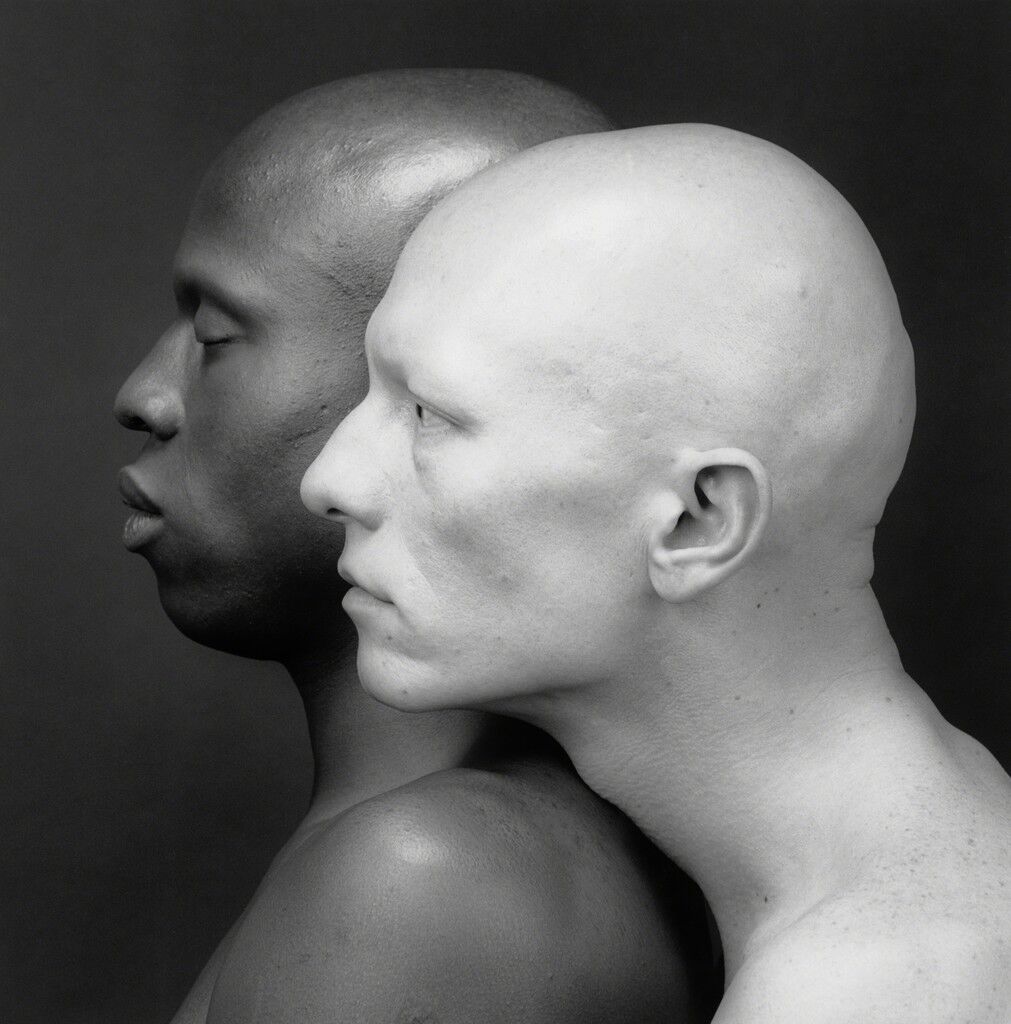 Robert Mapplethorpe
Ken Moody and Robert Sherman, 1984
"Robert Mapplethorpe" at Kiasma Museum of Contemporary Art, Helsinki (2015)
Advertisement
Alongside the Pictures Generation, a community of photographers, with
Nan Goldin
and
Robert Mapplethorpe
at the helm, rose to prominence through their unflinching depictions of
sexuality
and its attendant politics—AIDS in particular. Other artists, too, rooted sexual freedom and the effects of the AIDS epidemic on their tight-knit community at the core of their practice.
David Wojnarowicz
’
s potent, deeply angry paintings, collages, and videos have been vexing conservatives since the 1980s—even as recently as 2010, his masterwork A Fire in My Belly (1986-1987) was censored out of an exhibition at the Smithsonian Institution to impassioned controversy. 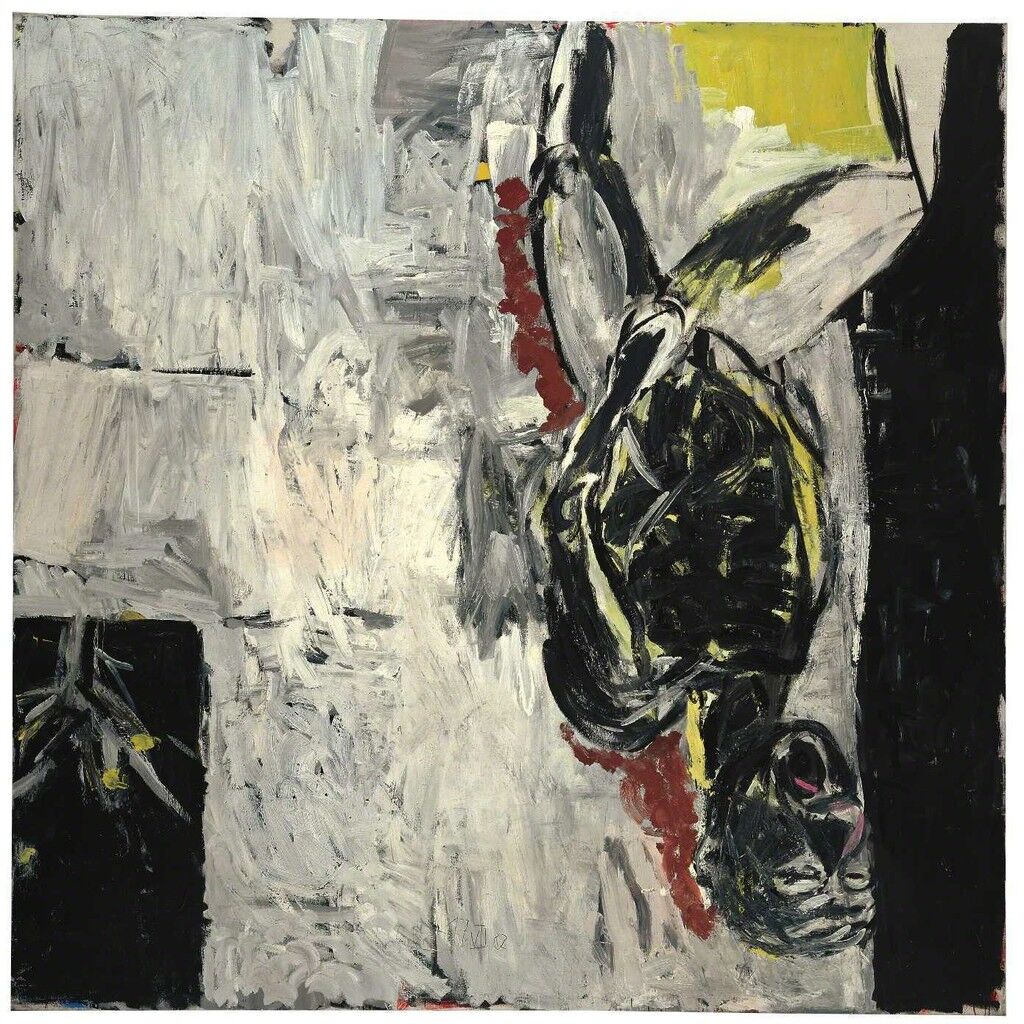 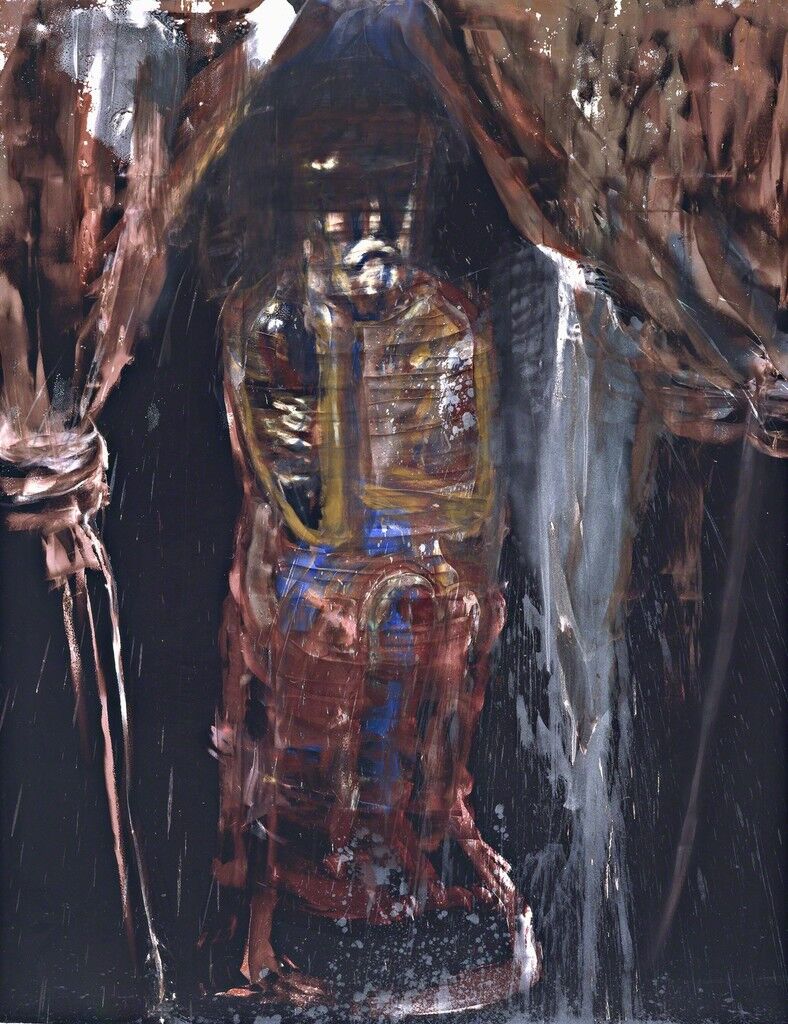 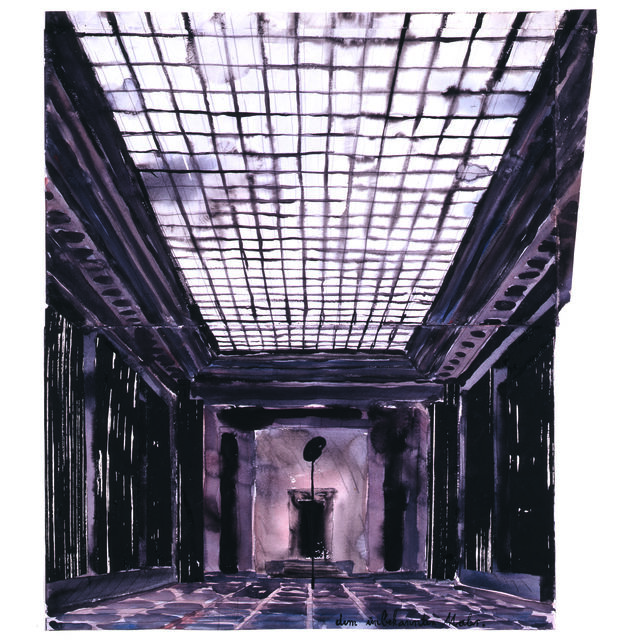 Anselm Kiefer
Innenraum, 1982
"Anselm Kiefer" at Centre Pompidou, Paris
German traditions were also at the core of the other vein of 1980s postmodernism, Neo-Expressionism. Originating in late 1970s painting by the
New Fauves
, the style drew inspiration from
German Expressionist
artists like
Emil Nolde
and
Ernst Ludwig Kirchner
, and traditional methods like
woodcut
.
Rejecting the cool distance of conceptual practices,
Georg Baselitz
,
Anselm Kiefer
, and
Sigmar Polke
were among those who revived the practice of painting by probing the raw memory of Nazi fascism. All were established artists by that time, and their figurative yet gestural style of painting often evoked political violence through horrific distortions of the human form, as with Baselitz, or haunted architecture, as with Kiefer.
Gerhard Richter
’s 1988 series “October 18, 1977,” depicting the members of the left-wing Red Army Faction terrorist group that had committed suicide in prison, adopts a smeared photographic aesthetic that cast doubt on the possibility of understanding history.
While Neo-Expressionism can be traced through other continental movements like Italy’s
Transavanguardia
, it found a second home in American art, continuing impulses of the
Bay Area Figurative School
and
Abstract Expressionism
.
Julian Schnabel
,
David Salle
, and
Eric Fischl
gained great attention through the first Neo-Expressionist exhibitions in major New York galleries like Mary Boone and Leo Castelli, but were also criticized for being more bravado than substance. Though they have often been written out of this history, female artists like
Elizabeth Murray
also made significant innovations in the style. Works like Painters Progress (1981) reimagine the space and shape of painting itself by warping canvas into sculptural forms. 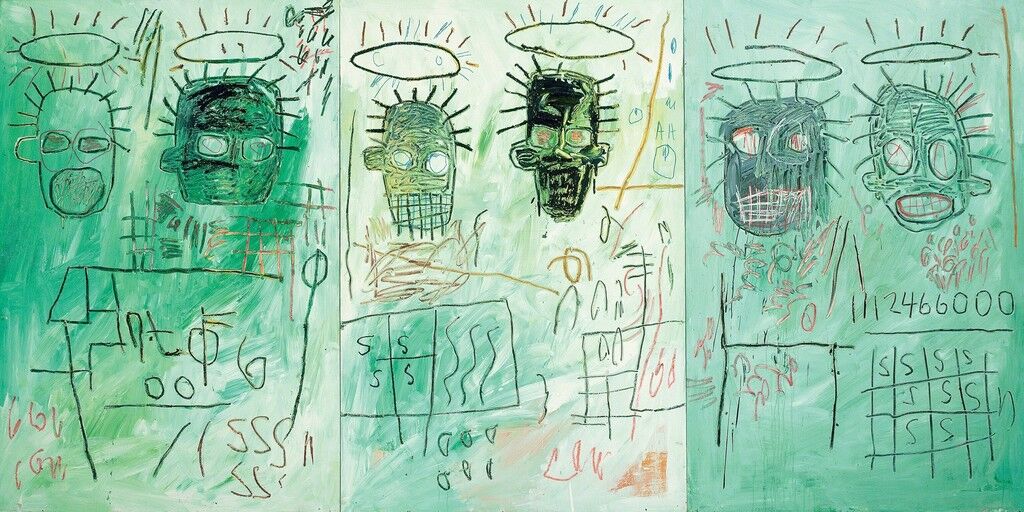 Jean-Michel Basquiat
Six Crimee, 1982
MOCA, Los Angeles
While some took their expressive strokes to canvas, others—like
Jean-Michel Basquiat
and
Keith Haring
—took them to the streets. The gifted, rebellious son of a Haitian home in Brooklyn, Basquiat devoured images, from the walls of MoMA to the pages of MAD magazine. Establishing himself through the tag of an informal graffiti group named “SAMO ©” throughout downtown Manhattan, he developed an aesthetic charged by dichotomies: primitive and classical, high and low, rich and poor. He went on to  bridge his street art origins with the Neo-Expressionist approach that filled the city’s galleries, integrating  text with brightly colored canvas, invoking the history of oppression and racism with a rough-edged scrawl. Peter and the Wolf (1985), for example, is a palimpsest of signs, layering paint, drawings, and words that pay homage to the history of African-American music. After his first solo show in 1982 at the Annina Nosei Gallery, Basquiat became an overnight celebrity. His intimate friendship with Andy Warhol may well have been a lifeline to coping with success in the scene; shortly after Warhol died in 1987, Basquiat overdosed on heroin. 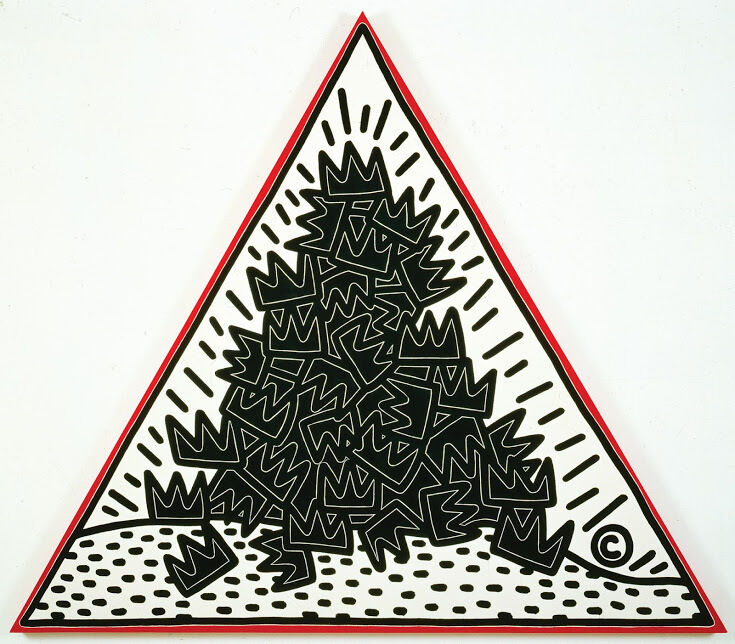 Keith Haring
A Pile of Crowns for Jean-Michel Basquiat, 1988
de Young Museum
But the lighter influences of
Pop
were also essential to the acceptance of artists who came up outside the gallery walls. Haring also got his start on the streets and, pivotally, on the subway, where he found open space for his graffiti. His vibrating, rounded archetypes of dogs, babies, and radiant hearts were accessible, even when they depicted darker themes. Built beneath his easy branding was a foundation of political activism. Haring’s art heightened awareness of the most important issues of the age—apartheid, the escalating abuse of crack cocaine, and, most poignantly, the AIDS epidemic, which would take Haring’s own life in in 1990. Andy Mouse (1986) offers a critique of the commodification of artists, as jubilant dancing figures buckle under the weight of a dollar bill featuring Warhol as the Disney icon.
Art that appealed to the public quickly found support in the ’80s, allowing Haring to produce more than 50 large-scale works during the decade, including the 77-foot-long, 24-panel mural he completed—in a single day—for the South of Market Child Care Center in San Francisco. A recent retrospective at the city’s de Young Museum demonstrates the beloved reputation he continues to enjoy. 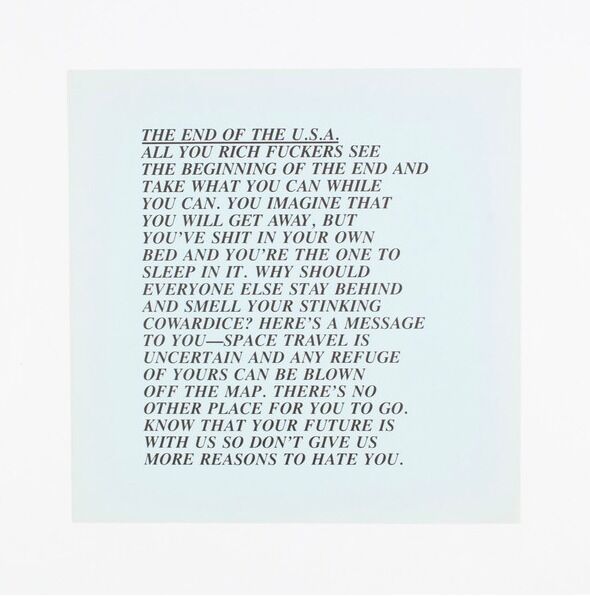 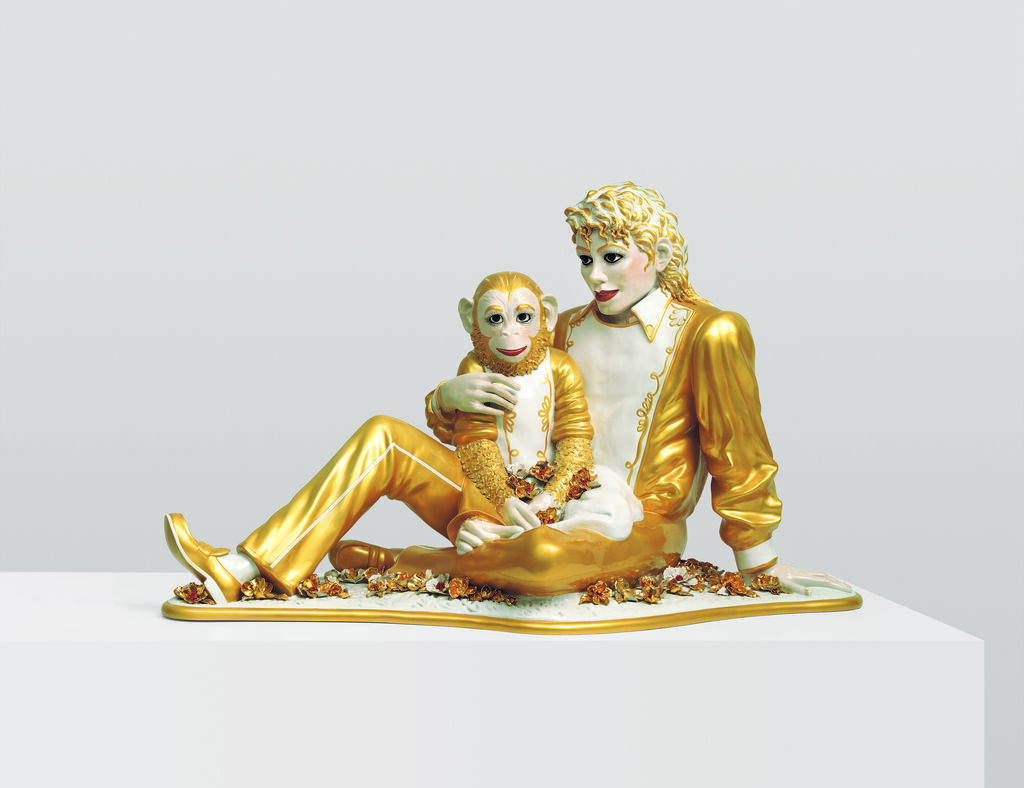 Jeff Koons
Michael Jackson and Bubbles, 1988
"The Inaugural Installation" at The Broad, Los Angeles
Late in the decade, as the economic boom cooled, artists and gallerists began to test the limits of what kinds of art object the market would bear. Former commodities broker
Jeff Koons
picked up a Pop aesthetic with a heavy dose of the readymade. His seductive, glossy sculptures—essentially monumental reproductions of banal objects like flowers or balloon animals—are a savvy dare to accept kitsch as high art. Based on his sales record, and a 2014 retrospective at the Whitney Museum of American Art, it seems “banality” has a permanent home in the world’s revered museums and most visible public spaces. Among other such Neo-Pop artists as
Ashley Bickerton
,
Allan McCollum
, and
Haim Steinbach
,
Jenny Holzer
’s
text-based
installations distilled contemporary life to a series of scrolling aphorisms, ultimately earning her the Golden Lion at the Venice Biennale in 1990. These pioneering artists reinfused the art world with a Pop sensibility that continues to pervade contemporary practices on a global scale. 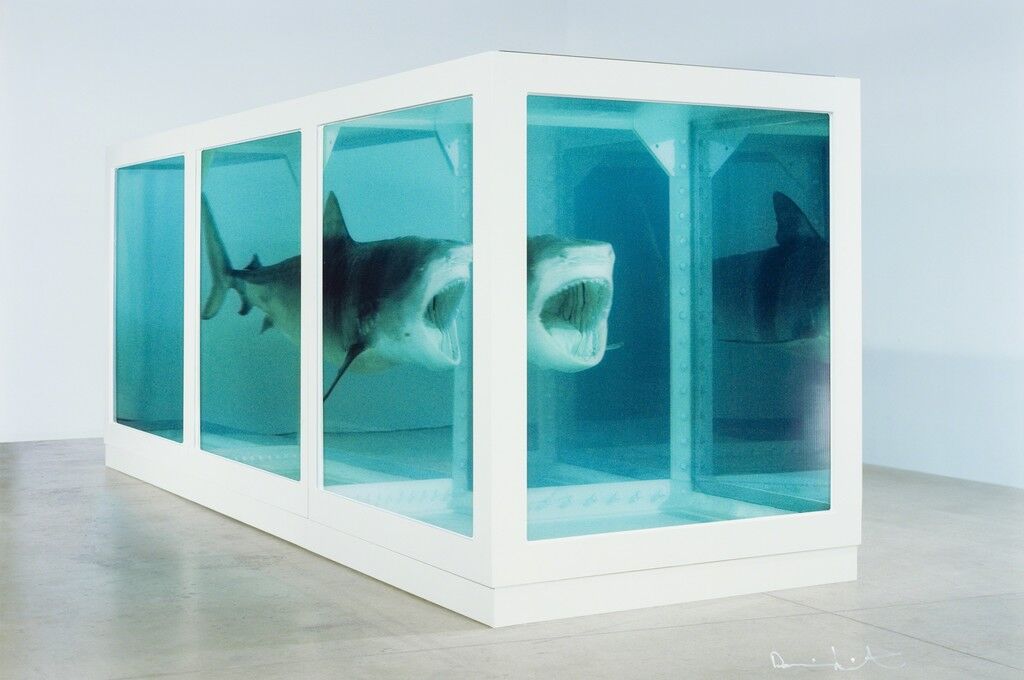 Damien Hirst
The Physical Impossibility of Death in the Mind of Someone Living, 2013
Paul Stolper Gallery 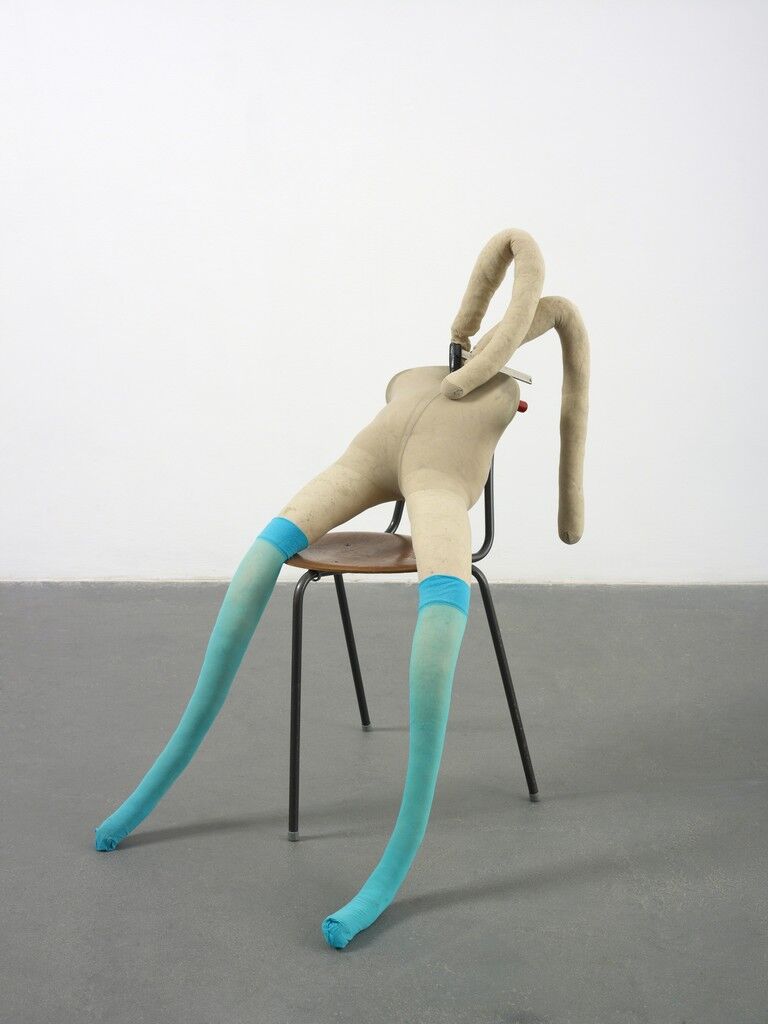 Sarah Lucas
Suffolk Bunny , 1997-2004
Royal Academy of Arts
While the ’90s would address its own set of concerns, the establishment of the Young British Artists in the ’80s provides a sort of transition between the two decades. Perhaps no YBA is as influential (or infamous) as
Damien Hirst
. His reputation was founded on the 1988 “Freeze” show in London, in which a disused warehouse became the exhibition space for work by Hirst and 16 of his colleagues and classmates from the renowned Goldsmiths College. The Physical Impossibility of Death in the Mind of Someone Living (1991), a shark in formaldehyde, and Mother and Child Divided (1993), a four-part sculpture of a bisected cow and calf, rank amongst his best-known works and display the modern
vanitas
that make his work impressive and infuriating at turns. 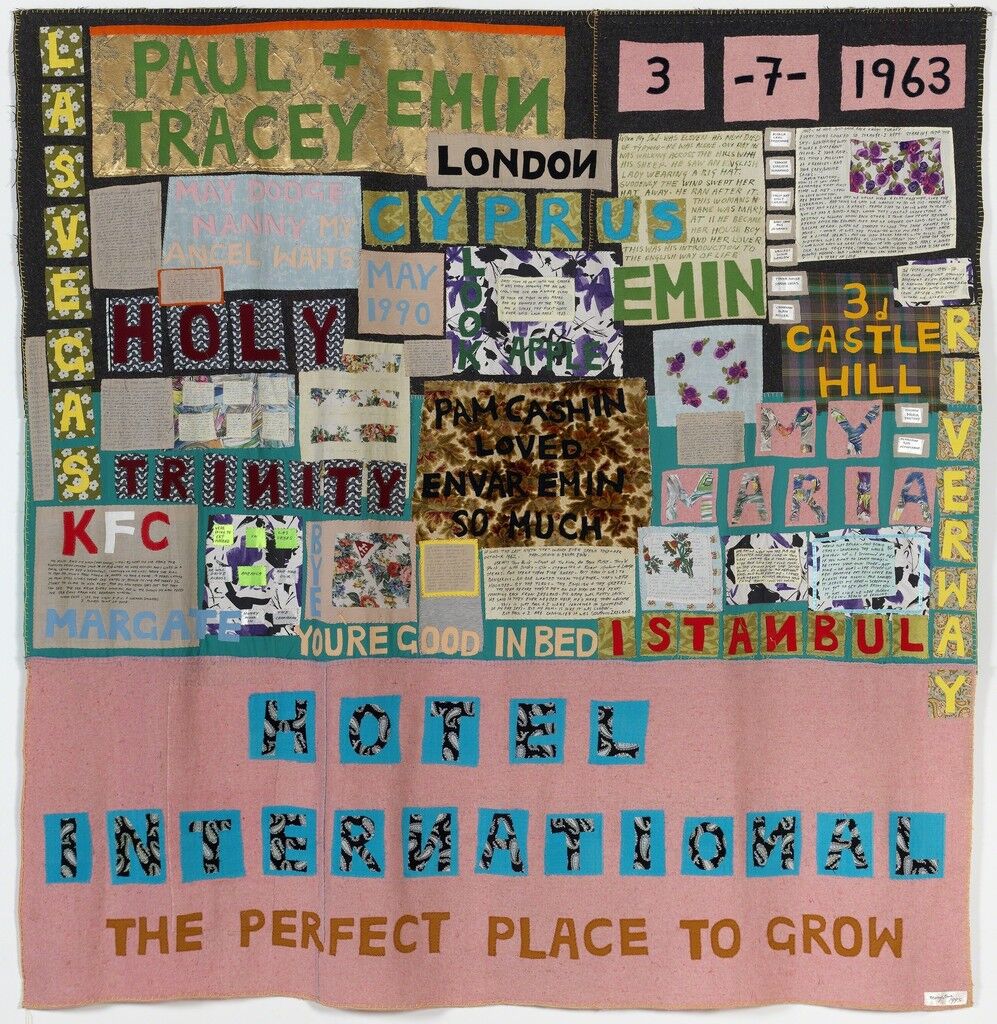 Tracey Emin
Hotel International, 1993
White Cube
Hirst’s enduring reputation, like that of fellow YBA provocateur and Turner Prize finalist
Tracey Emin
, was cemented by the billionaire Britart patron Charles Saatchi. Collecting vertically, Saatchi amassed a collection with deep holdings of particular artists—blue-chip artists
Sol LeWitt
and Anselm Kiefer, but also
Sarah Lucas
,
Mark Wallinger
,
Rachel Whiteread
, and, of course, Hirst. Building their cache with shows in his eponymous gallery, Saatchi vaulted YBAs to worldwide prominence in 1997 with the show “Sensations: Young British Artists from the Saatchi Collection” at London’s Royal Academy of Art. But that is a story for another decade.
George Philip LeBourdais
Related Stories 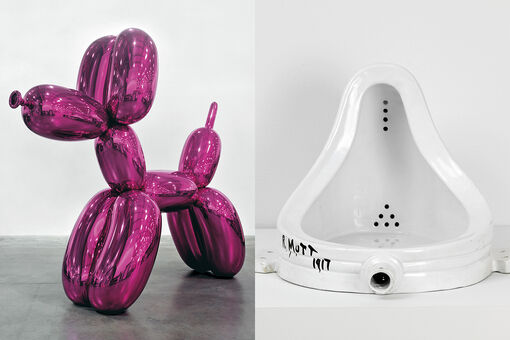 Why Jeff Koons Is a Natural Successor to Marcel Duchamp
Annette Lin
May 20, 2019 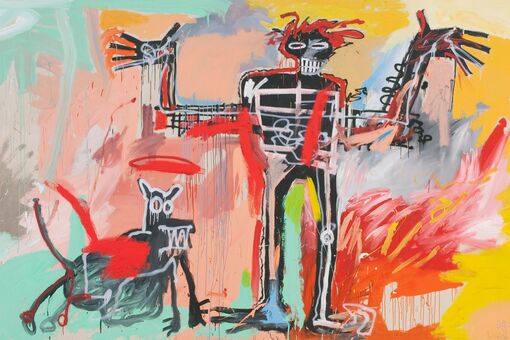 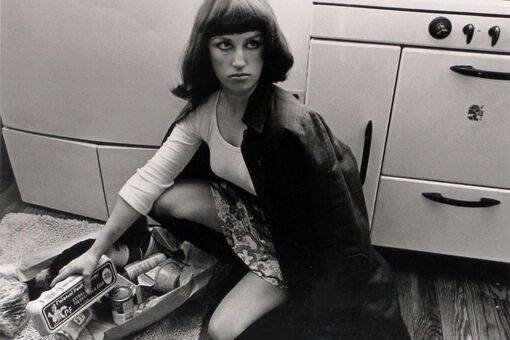 The Bad Boy Artists of the 1980s Owe a Debt to Their Feminist Predecessors
Alina Cohen
Feb 28, 2019 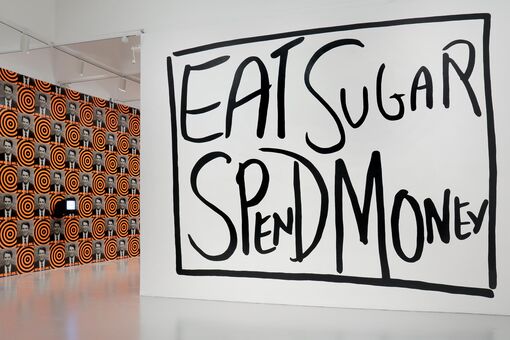