This Artwork Changed My Life: Masaccio’s “Expulsion from the Garden of Eden” 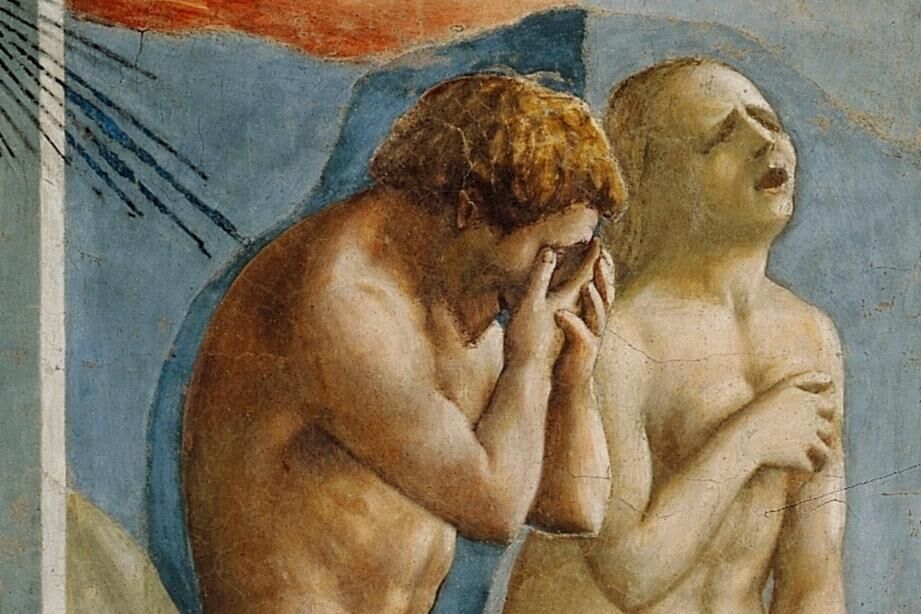 Detail of Masaccio, Expulsion from the Garden of Eden, ca. 1427. Image via Wikimedia Commons.

Elephant and Artsy have come together to present This Artwork Changed My Life, a creative collaboration that shares the stories of life-changing encounters with art. A new piece will be published every two weeks on both Elephant and Artsy. Together, our publications want to celebrate the personal and transformative power of art.
Out today on Elephant is Rachel Grace Almeida on Bárbaro Rivas’s “Barrio Caruto.”
Masaccio
’s Expulsion from the Garden of Eden (ca. 1427) is the loudest painting I’ve ever encountered. I saw it while walking silently around Florence’s Brancacci Chapel, a tiny room covered with incredible Renaissance art. Yet I was transfixed by this particular
fresco
. Nearly 15 years later, I can still hear that endless howl of despair as Adam and Eve are ordered out of the Garden of Eden.
They appear to know that it is a crime they are no longer innocent. They look towards an off-stage future, out in the wilderness, as they leave everything they knew behind. On Eve’s face, amid the bleak, downturned eyebrows and an open, keening mouth, Masaccio perfectly captured the desolation of new grief. I was shocked to suddenly recognize myself in that expression.
I first saw the Expulsion in September 2005, in the Church of Santa Maria del Carmine. I was 22, and spending six months in Italy studying art history, delaying my entry into the real world after finishing university. I had good reason to: My parents had both died before my 20th birthday. I was struggling to understand how to return home to London and finish growing up, while carrying the weight of double bereavement. Instead, I spotted an ad in the student newspaper for courses at the British Institute of Florence, and signed up. Installation view of Masaccio Expulsion from the Garden of Eden in the Brancacci Chapel. Photo by S. Vannini / De Agostini via Getty Images.

Being orphaned so early in life is a devastatingly lonely experience. It would be many years before I met anyone else who had gone through a similar loss. Back then, I filled my time by pretending to be just like any other gap-year student: learning the stories behind the art, trying every box of wine I could find, and flirting with cute boys who teased me by mocking my accent. I completely refused to engage with my grief—with what made me different from the other twentysomethings. I was out in the wilderness, but acted as though I wasn’t. I hoped that would make it true.
Masaccio was born on December 21, 1401, in Tuscany. His frescoes mark the transition point from Gothic art to a more natural, humanist style. He even places Adam and Eve’s shadows behind them, as though they are being lit by the same chapel window that let in the autumnal Italian sunshine for me, while viewing his work nearly 600 years later. Masaccio shows us Adam and Eve walking out into the light, not the darkness; there’s hope for them.
It was verging on chilly in the chapel that September day. The high windows directed the sunlight into the center of the room, where visitors were not allowed to step. The rules of medieval art preservation meant that we had to remain in the shadows, around the edges. Seeing Masaccio’s Adam and Eve in their natural habitat felt like traveling backwards in time. Some fig leaves had been painted onto the figures around 1680, in accordance with the more prudish style of Cosimo III de’ Medici; they were removed in 1988, as the painting was cleaned of soot damage. Other than that, the Expulsion is in place exactly as Masaccio had painted it, back in the late 1420s.

Masaccio, Expulsion from the Garden of Eden, ca. 1427. Image via Wikimedia Commons.

Advertisement
I took comfort in the timelessness—of both the fresco and the experience of looking at it. I stood gazing up in wonder at this work, just as generations of people had done before me, just as Masaccio’s contemporaries had done in the early 15th century. They had decided that his work was so pivotal in their understanding of what art can do, that within just a decade of his death, they were calling him the founder of Italian Renaissance painting. Masaccio died soon after he completed the Expulsion, in 1428. He was 26, only four years older than I was when I first saw his work.
Whenever I catch a glimpse of the fresco out in the world, it takes me straight back to that first encounter, to the strangeness of being so young but feeling impossibly old. Masaccio’s visionary talent brought psychological truth to his characters. He transformed Adam and Eve from the remote religious figures of his day into thinking, feeling human beings we can truly care for.
I never thought that I’d find something in common with Eve, the first woman, but then, that’s the magic of art: It undoes myth and time to find the relatable human detail under the surface. Eve and I had each lost the only world we had ever known, and we were both terrified of what was to come—but still, we continued to walk onwards, always into the light.
Head to Elephant to read its latest story in the series, Rachel Grace Almeida on Bárbaro Rivas’s “Barrio Caruto.”

Artsy and Elephant are looking for new and experienced writers alike to share their own essays about one specific work of art that had a personal impact. If you’d like to contribute, send a 100-word synopsis of your story to [email protected] with the subject line “This Artwork Changed My Life.”
Suchandrika Chakrabarti
Related Stories

This Artwork Changed My Life: Barbara Kruger’s “Untitled (Your body is a battleground)”
Advertisement
Further reading in Art