I’m Obsessed with This Strangely Beautiful Painting of Ed Sheeran 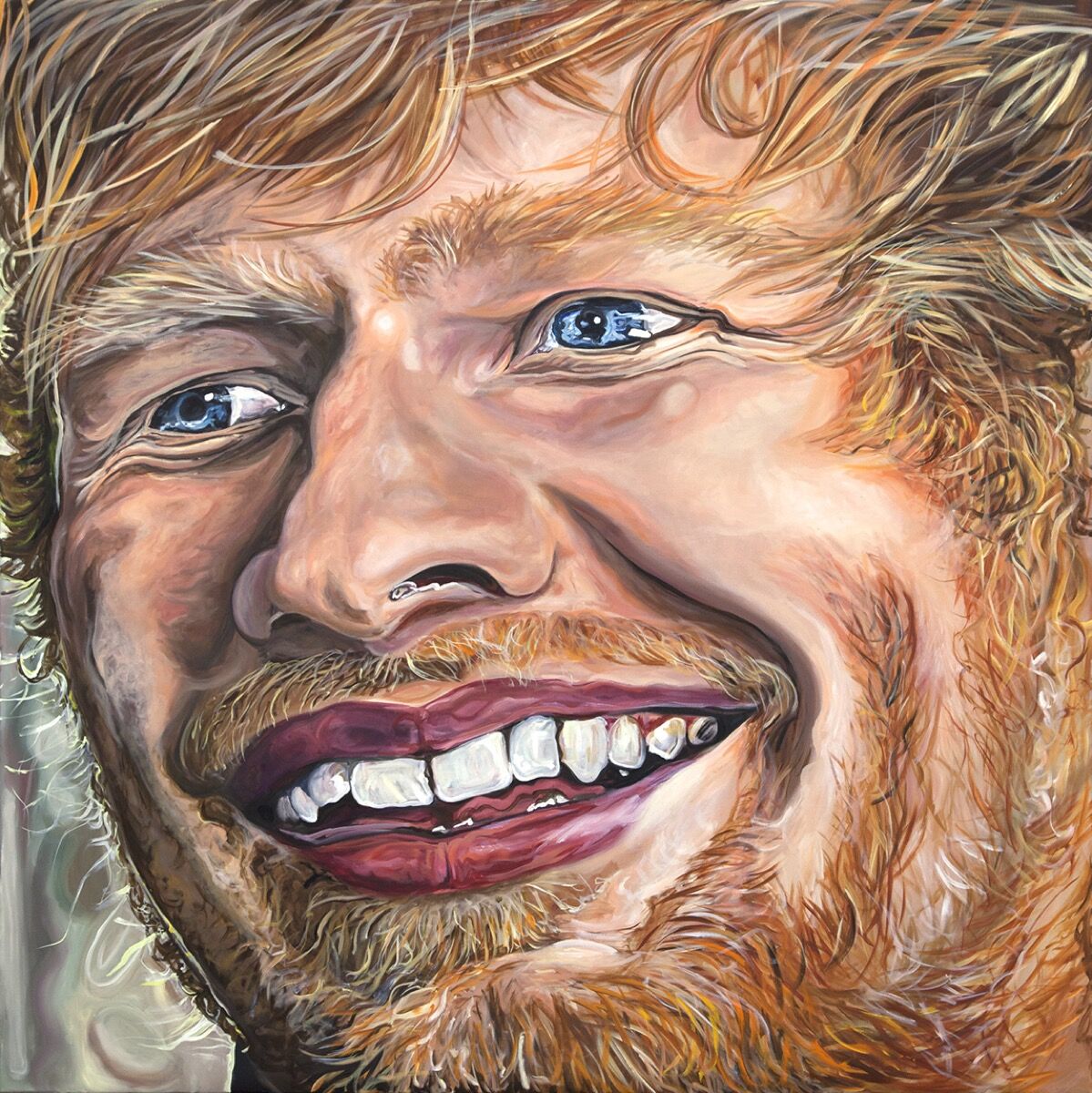 I can remember the first time I heard Ed Sheeran’s 2017 earworm “Shape of You.” I was with my wife, in a taxi, in Puerto Rico, and the song would be inescapable for the ensuing sweaty summer weeks. Its bouncy melody was infectious in the true meaning of that overused word—and also already familiar, mainly because Sheeran had plucked it from the TLC song “No Scrubs,” an appropriation that would later lead him to give writing credits to the original’s creators. There was something boldly hateable about the single, and yet it was also fascinating in its idiocy. “I’m in love with the shape of you, we push and pull like a magnet do,” Sheeran keened, content to slaughter grammar on the altar of rhyme. Elsewhere, his attempts at romantic banter play like those of a teenage boy who has recently learned English by reading a book called How to Talk Sexy Fast & Now! “Last night you were in my room,” run these tender, Shakespearean lines, “and now my bedsheets smell like you.”
Not to be completely superficial here, but my complicated enjoyment of “Shape of You” was only heightened once I saw Ed Sheeran: that wild swoop of ginger hair; his pale torso, which doubles as an archive of the world’s worst tattoos, including one of the Heinz Ketchup logo. An unlikely pop star, indeed. A small role in 2016’s Bridget Jones’s Baby plays on his unremarkableness, as Bridget and a friend hang out with Ed Sheeran before an actual Ed Sheeran concert, and have no freaking idea who he is. The man is puppyish; moody, shirtless portraits only underscore a harmless braggadocio that’s cute, not threatening.
Which all brings us to the absolutely incredible Shape of Painting, Summer Hit (2017) by the German artist
Jana Euler
. Here we have a grinning Sheeran in extreme close-up, each detail—eyebrows, nostrils, incisors—rendered lovingly. While the style inches toward the hyperrealistic, there’s a certain melted quality that recalls Photoshop’s “liquify” function. Sheeran is smiling, blindly optimistic, his bright eyes directed at something off-canvas, giving the painting the feeling of
Socialist Realism
. Confoundingly, he appears to lack eyelashes. (I have stared and zoomed and still can’t make a determination here; it’s unclear whether the painterly gestures next to his eyes are wispy lashes or flesh-crinkles.) 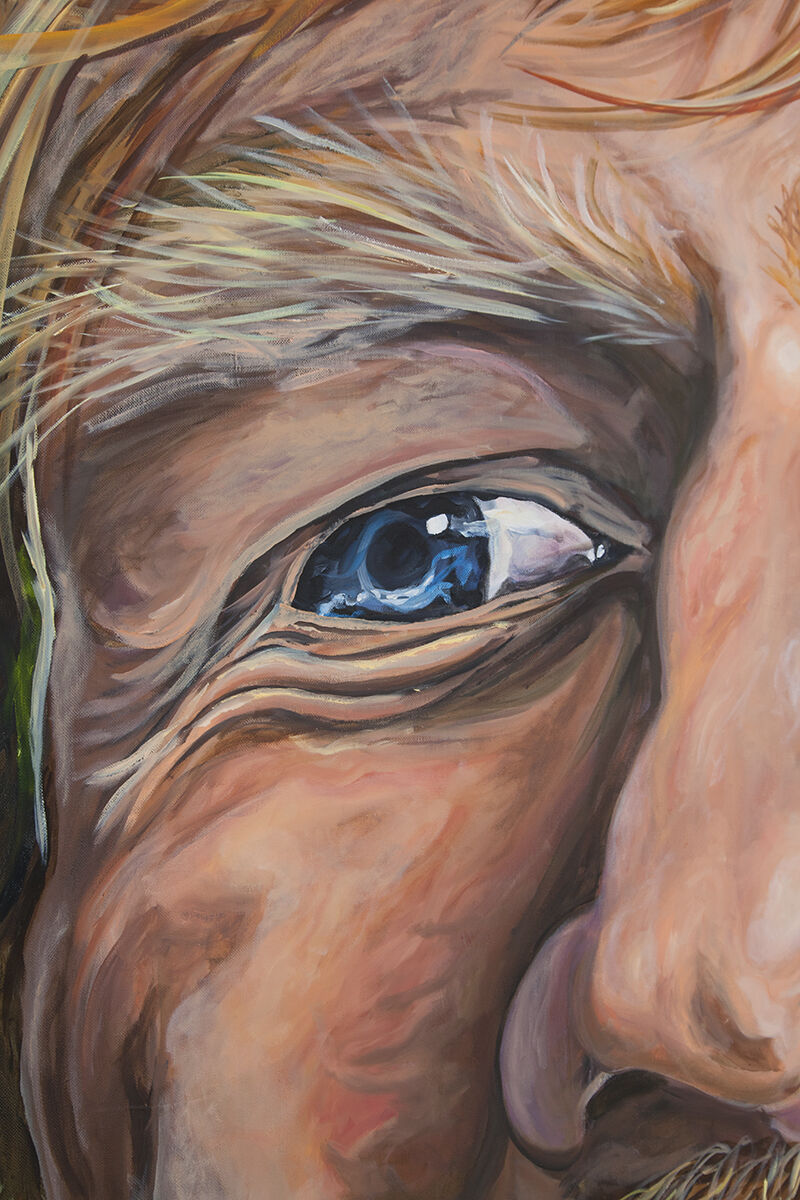 Euler’s portrait is admittedly flattering—Sheeran has never looked more handsome. The artist’s treatment of the singer’s red beard puts me in mind of
Van Gogh
’s self-portraits. Sheeran’s beard, interestingly, is flecked with a few errant white hairs, and since he’s a mere 28 years old, that raises the question of whether Shape of Painting, Summer Hit is actually a conjuring of some future Sheeran: older, wiser, wizened.
After imbibing the strange beauty of this work, one might wonder the obvious: Why? I haven’t asked Euler about her personal feelings for the pop star, and honestly, I’d rather not know. (The artist is 37, which would have made her a teenager when “No Scrubs” dropped in 1999; perhaps she also clocked the uncanny tremors of its DNA vibrating beneath Sheeran’s rip-off.) My guess would be that Euler has no special attachment to the Sheeran oeuvre, since she’s one of those versatile artists whose restless talent is always roving for a subject, however random. She’s painted swans, beer glasses, Whitney Houston; painting is the point, not what’s painted. By subtly beautifying the famous singer here—applying a kind of filter to him—she solicits an uncanny reaction from the viewer. Our initial spark of recognition (um, isn’t that Ed Sheeran?) is deflated by doubt (nah, not goofy enough to be Ed Sheeran) and questions regarding context (there’s no reason Ed Sheeran, of all people, would be hanging in an art gallery). Euler’s title, meanwhile, with its winking allusion to the title of Sheeran’s most famous song, puts any confusion to rest. 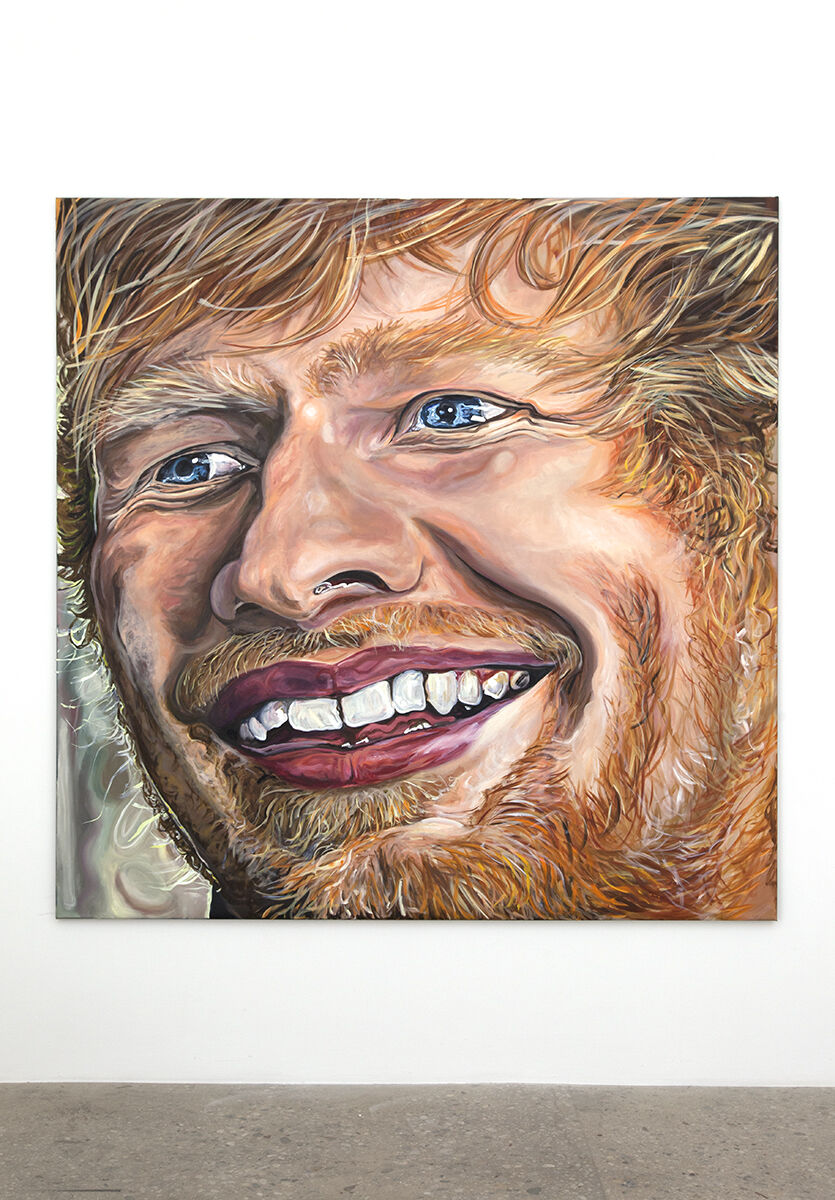 Advertisement
While it’s unlikely that this is straight-up fan art, it also doesn’t seem to be an ironic “celebration” of a middlebrow musical hack. That ambiguity is what gives Shape of Painting, Summer Hit its complex frisson. Looking at it makes me want to go back and reread Carl Wilson’s tour de force Let’s Talk About Love: A Journey to the End of Taste (2007), a book-length exploration of Celine Dion, in which the Canadian author comes to terms with his own dislike of the megastar in the face of her rabid global popularity. Has Euler struggled with the push-pull of her own web of Sheeran-feelings? Has he invaded her Spotify, the same way his 2017 song “Perfect” has undoubtedly invaded a generation of weddings, its anemic couplets (“Now I know I have met an angel in person / And she looks perfect”) the aural equivalent of Nicholas Sparks or
Thomas Kinkade
?
Maybe it’s not so complicated; maybe Euler was simply taken by how Sheeran looks. And yet, if that’s the case, her cropping choices only add further questions. Why zoom so insistently in on Sheeran’s grinning mug, leaving out that tapestry of bad tattoos, which must surely be catnip to any image-obsessed painter? More questions: What, exactly, is Sheeran looking at, or toward? And how much different—how impossible, how frightening—would Shape of Painting, Summer Hit be if Sheeran were looking straight at the viewer, daring us to answer his romantic plea, to account for our feelings against the earnest, pushy, awkwardly phrased weight of his own?

Send a 150-word summary of the detail in a work of art that you can’t stop thinking about to [email protected] with the subject line “I’m Obsessed.” We’ll review submissions for potential inclusion in our publication.
Scott Indrisek
Related Stories

Trends to Watch in 2021: Craft Figuration

Trends to Watch in 2021: Return to Nature