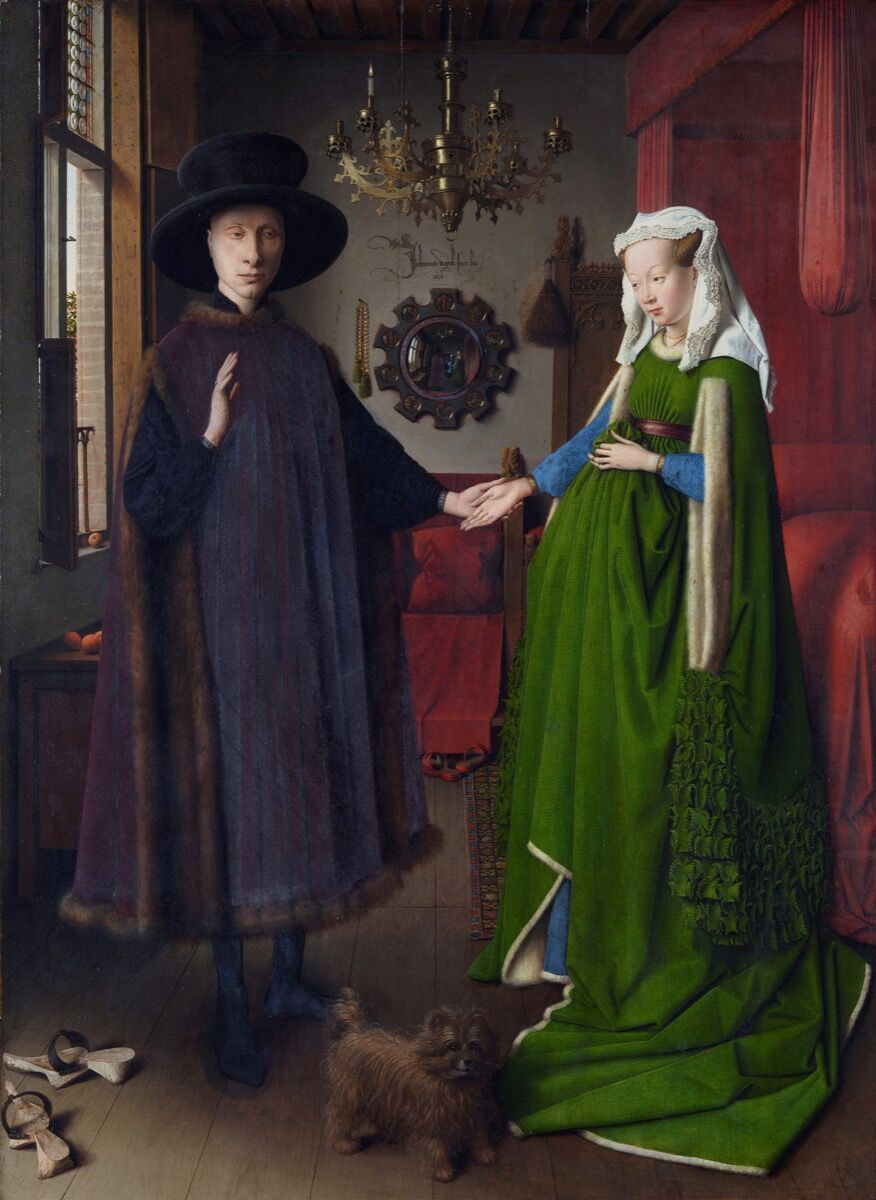 Jan van Eyck
, a Flemish painter who worked in Bruges, is most well known for his enigmatic portrait of Giovanni (?) Arnolfini and his Wife (1434). Popularly referred to as the Arnolfini Portrait, this painting has posed more questions than answers in the nearly six centuries since its creation. A couple stands in a beautifully furnished room, the woman’s right hand resting on top of the man’s left. They are donned in heavy-looking fabrics and furs, and carefully placed symbols imbue significance into every square inch of the painting: the little dog at their feet; a single lit candle in the chandelier; oranges sitting on a chest; shoes tossed off in the back and foreground; and an odd convex mirror on the wall behind the couple that reflects the whole scene back at the viewer. Some art historians have spent their whole careers attempting to decipher these symbols, the scene at hand, and the people in the painting. From questions of pregnancy to perspectival accuracy, misinterpretations have proliferated and evolved since this painting entered the National Gallery in London in 1842. Below, we debunk three major misconceptions about the Arnolfini Portrait.

The Arnolfini Portrait is a depiction of a wedding

One cannot discuss the Arnolfini Portrait without mentioning Erwin Panofksy, an art historian who famously attempted to untangle Van Eyck’s masterwork. In 1934, Panofsky penned a convincing narrative in which every detail was accounted for: What is being depicted? The work shows a marriage ceremony of some kind. While the setting may seem odd and the witnesses few, until 1563, two people could contract a valid Catholic marriage without witnesses and in any location, at any time, as long as there was “mutual consent expressed by words and actions.” Why is there only one candle burning on the chandelier? As Panofsky explained, “A burning candle—symbol of the all seeing wisdom of God—not only was and often is, required for the ceremony of taking an oath in general, but also had a special reference to weddings.”
In his essay, Panofsky addressed every element of the painting with strong and unwavering conviction. In 1990, however, a document detailing the marriage of Giovanni Arnolfini and Giovanna Cenami revealed that the couple married in 1447, six years after Van Eyck had died and 13 years after the painting had been completed. This discovery reintroduced some of the most basic questions about the painting and opened new interpretations of its meaning, one idea being that the work is more about displaying status and wealth than anything else.

Jan van Eyck is a master of rendering perspective 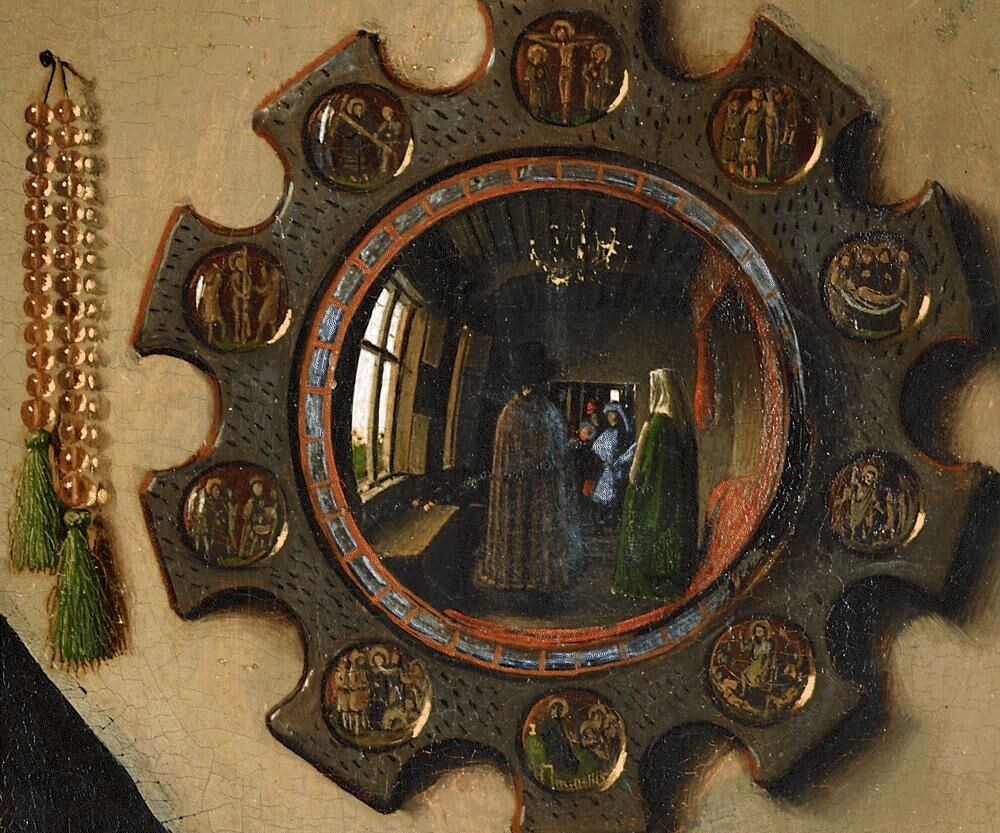 Panofksy cited art historian Max J. Friedländer on the composition of the Arnolfini Portrait: “In [the portrait], a problem has been solved which no fifteenth-century painter was destined to take up again: two persons standing side by side, and portrayed full length within a richly furnished room,” wrote Friedländer. For many art historians, the Arnolfini Portrait appeared to be an achievement not just in its incredible detail, but also in its accurate depiction of a space.
In 2000, English painter
David Hockney
proposed a theory about some of art history’s most impressive draftsmen—that artists have been using devices such as concave mirrors, the camera obscura, and various other types of lenses to create realistic paintings since around 1430, far before they were thought to be used as drawing aids. Among the list of artists Hockney called out as potential subjects were
Caravaggio
,
Vermeer
,
Ingres
, and Van Eyck. Van Eyck, Hockney argued, especially would have been aware of how to project images using a concave mirror. The Arnolfini Portrait famously includes a convex mirror in the background—if the convex side was silvered and employed as a mirror, it is likely that the concave side could as well have been used to project the image.
Hockney’s theory and the corresponding symposium he held at New York University were not unanimously accepted, and art historian Linda Nochlin and writer Susan Sontag were among those who challenged his ideas. “To say that there were no great painters before optical devices, [Sontag] said, is like saying there were no great lovers before Viagra,” the New York Times reported. Hockney’s need to rationalize the remarkable skill of Van Eyck confirms how seemingly out of this world the detail in the work is.
Despite the photorealistic detail, however, Van Eyck’s inaccurate approach to perspective is revealed through slight inconsistencies. The National Gallery has pointed out that, while it appears as if the fourth wall has been lifted from the room and the viewer is stepping into a totally plausible room, the chandelier would not actually fit in the depicted space. James Elkins, author of “On the Arnolfini Portrait and the Lucca Madonna: Did Jan van Eyck Have a Perspectival System?” (1991), pointed out that the lines of the floorboards lead to separate vanishing points. While the detail-obsessed artists of the
Northern Renaissance
created paintings where the verisimilitude rivaled that of a photograph, Van Eyck’s understanding of perspective isn’t accurate. James M. Collier summed it up in a sentence: “Jan van Eyck shows no more than an intuitive feeling for perspective space.…His space is essentially chaotic.” 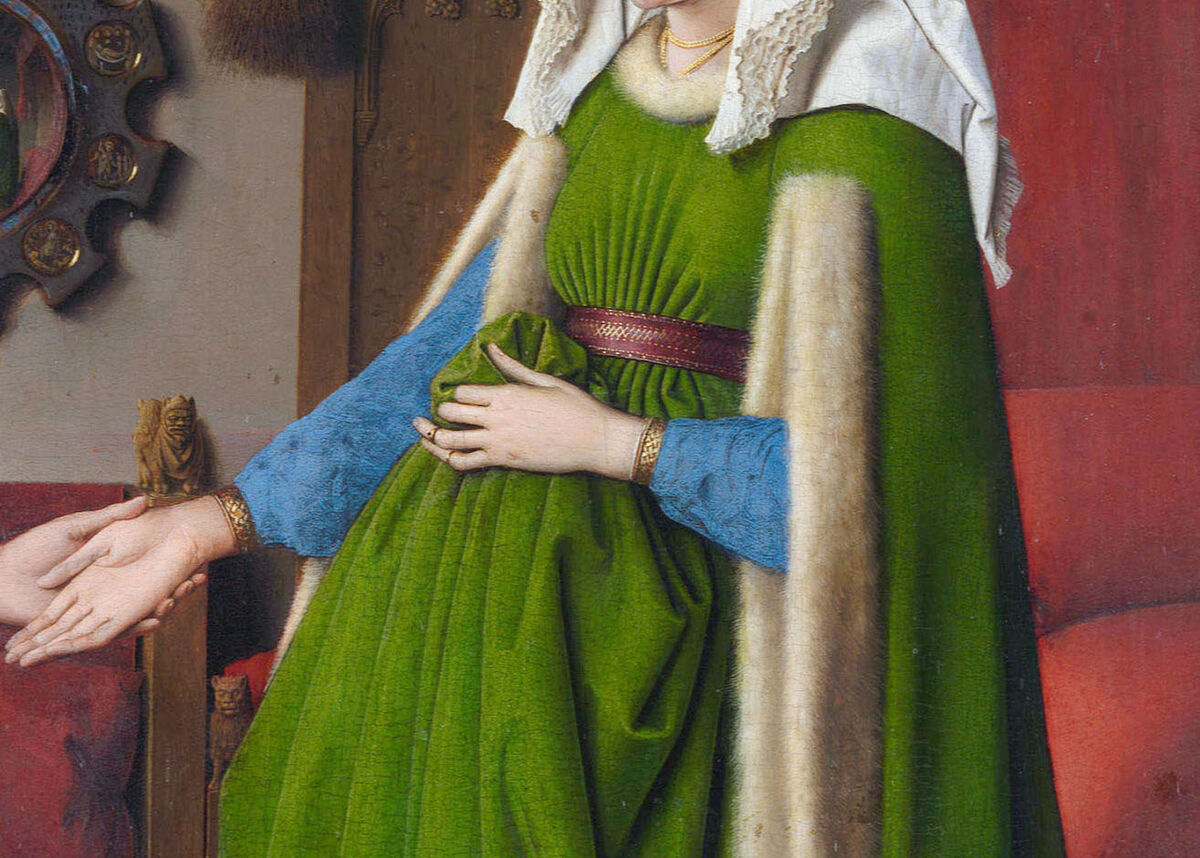 Advertisement
With her slender, pale hand resting on what appears to be a late-stage pregnancy baby bump, there is little to suggest that Giovanna Cenami is not with child. Panofsky argued the importance of the fact that this union is taking place in a “nuptial chamber” instead of a sitting room, and pointed to a carved wooden figure of St. Margaret triumphing over the Dragon in the background of the painting. “This Saint,” Panofsky wrote, “was especially invoked by women in expectation of a child.”
If you look closely, however, you will see a vivid green cloth intertwined between Giovanna’s fingers. She is holding up her dress, which is itself a conspicuous display of opulence and wealth. Clothes are an undeniable form of visual communication, and this dress gives myriad clues as to who these people were and the society they lived in. If she were to let go of the heavy bundle of fabric she’s holding at her sternum, the cloth would pool around her, rendering her nearly immobile.
The Arnolfinis were a wealthy Italian family that traded luxury goods (specifically fabrics) in Bruges. During this time, there is an emergence of mercantile capitalism that flourishes in port cities throughout Europe. Giovanna’s dress signals some of the luxury trades that the Arnolfinis would have been making. The green fabric is broadcloth—a dense, widely woven wool that was one of England’s finest exports at the time—and the fur on her trimmed sleeves is thought to be arctic fox fur, which would have been a Baltic import. With the rise of trade, the social rigidity of the past began to dissipate, and wealth was no longer reserved for those who were born into it. There are many more questions than answers when it comes to understanding the Arnolfini Portrait, but one thing is clear: They were one of the wealthiest and best-dressed couples in town.
Sarah Dotson is Artsy’s Managing Editor.
Related Stories