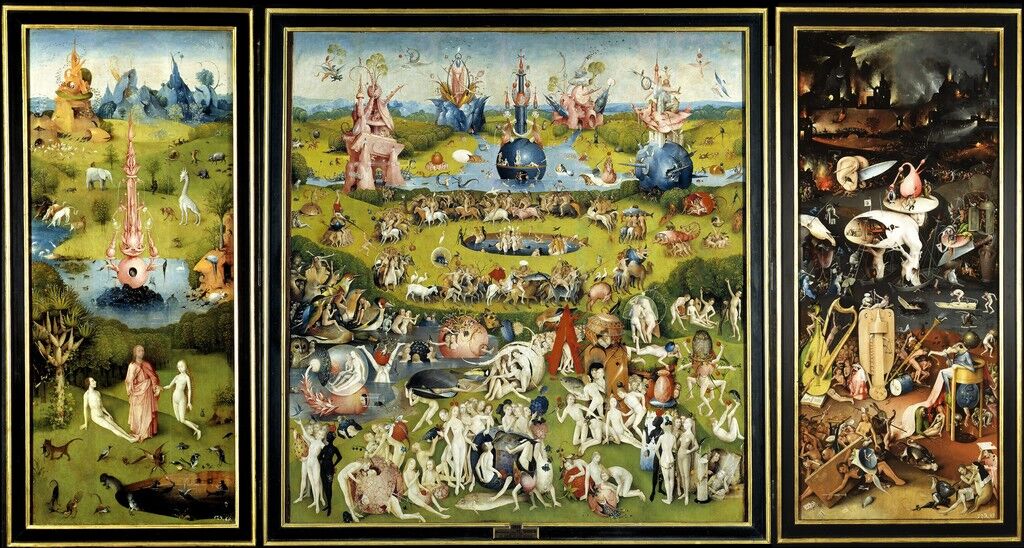 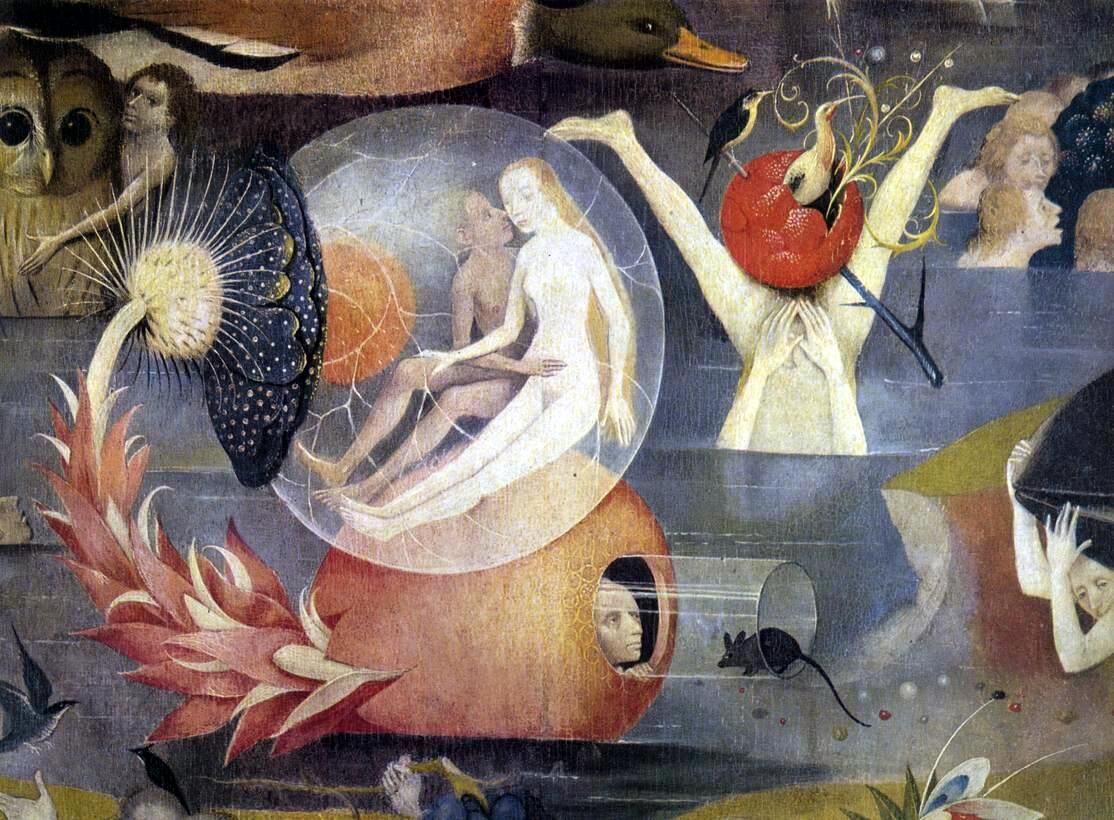 The story of Garden of Earthly Delights begins, of course, with its enigmatic creator. While Bosch’s biographical details have been difficult to pin down, historians know that he was born as Jeroen van Aken around 1450 to a family of artists rooted in the once-bustling city of Hertogenbosch, currently in the Netherlands. No artworks attributed to his relatives survive (his grandfather, father, uncle, and brothers were all painters, too), but Bosch was almost certainly schooled in the family workshop, as scholars Matthijs Ilsink and Jos Koldeweij pointed out in the book Hieronymus Bosch: Visions of Genius (2016).
Like most professional artists of the Middle Ages, Bosch’s skills weren’t confined to a single medium. He also designed stained glass windows and brass pieces, and even embroidered. But he excelled in painting, and nowhere is his superior craftsmanship and pioneering imagination more evident than in Garden of Earthly Delights. The painting is his most renowned and largest surviving work. Arranged as a triptych, it depicts the union of Adam and Eve on the left panel, the aforementioned bacchanal on the sprawling central panel, and a bawdy Hell on a panel to the right. Taken as a single narrative, it shows the fiery fate of humanity consumed by passion and pleasure. As Pilar Silva Maroto, curator at the Museo del Prado where the painting is housed, has explained: “If we look closely, the only thing that connects Paradise with Hell is sin.” 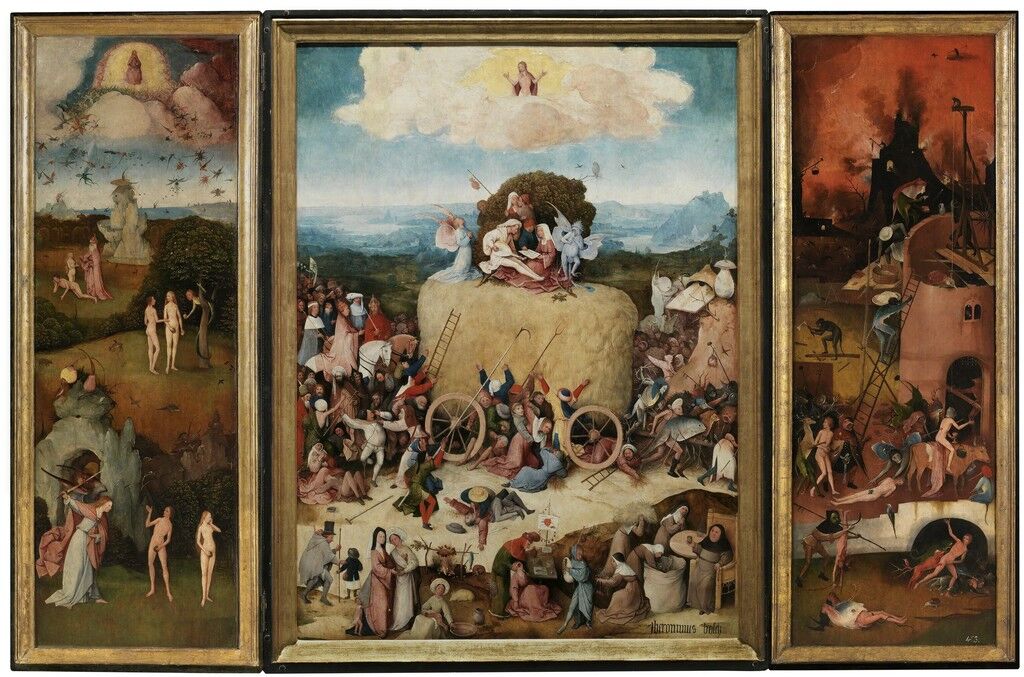 Hieronymus Bosch
The Haywain, 1500-1502
"Bosch. The 5th Centenary Exhibition" at Museo Nacional del Prado, Madrid
Advertisement
By the time he began the triptych, Bosch had already become a favored artist of European nobility, who habitually commissioned artworks featuring religious themes—the only acceptable artistic content of the day, given the overarching Christian orthodoxy of Western kingdoms in the Middle Ages. The Catholic Habsburg noble Henry III of Nassau, or his nephew Englebert II, likely charged Bosch with the creation of The Garden of Earthly Delights. It was later owned by Spain’s deeply religious King Philip II in the 16th century. Bosch himself was a believer, though some scholars have conjectured otherwise; Wilhelm Fraenger, for example, posited in 1947 that the painter was a heretic and mystic, a theory that’s since been debunked.
All of Bosch’s surviving artworks are religiously themed and glutted with biblical (i.e., moralizing) allusions. Yet, he also exhibited a whimsical weirdness that was previously unheard of in devotional art, which typically presented fairly rote depictions of good and evil, virtue and sin, and Heaven and Hell, writer Becca Rothfeld hasexplained. With Garden of Earthly Delights —and to a lesser extent in some of his other paintings, like The Haywain Triptych (c.1516)—Bosch exploded preconceived formulas by injecting references to heady dreams and nightmares into his vision of Eden, earthly pleasure, and Hell. 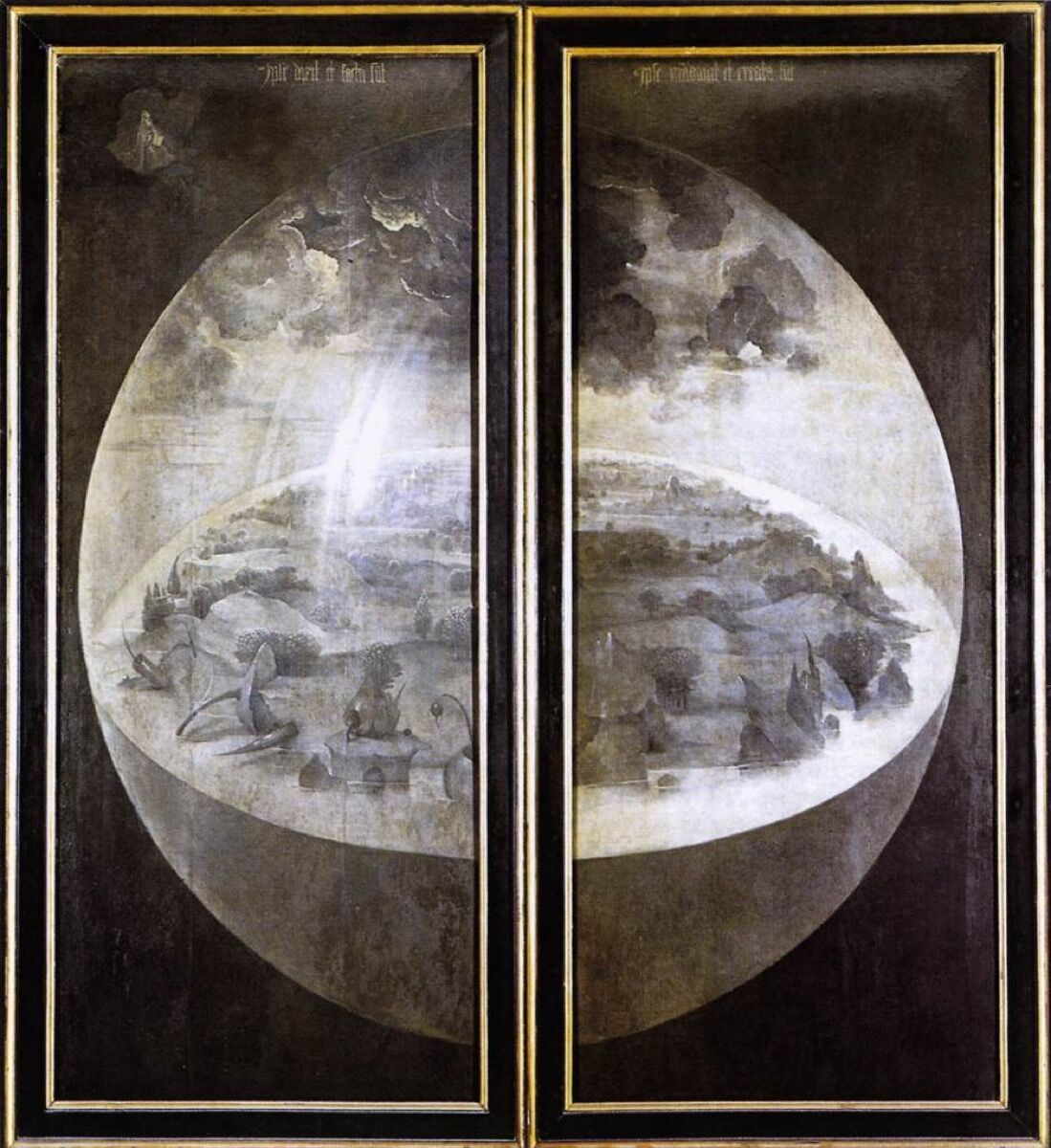 The exterior doors of Garden of Earthly Delights subtly set the stage for the rollicking interior panels. When closed, the painting depicts the “third day of creation,” a biblical milestone when Earthly paradise was forged by God. Painted in grisaille, it shows the world as a transparent orb filled with a monochromatic realm that accentuates the incandescently colorful world found within.
When opened, the triptych’s left panel continues the biblical narrative, but with Boschian imagination. Here, Bosch renders a common theme: Adam and Eve in Paradise, with allusions to love and lust. Rather than depicting Eve’s fall from grace (that fateful bite into the apple), he shows God presenting Eve to Adam. This can be read, as scholar Paul Vandenbroeck has pointed out, as a reference to marriage and, in turn, God’s Old Testament instructions to “be fruitful and multiply”—put simply, to procreate. Surrounding the figures we see spurting fountains, fecund fruit trees, and a vast array of creatures that allude to the pleasures and chaos to come. 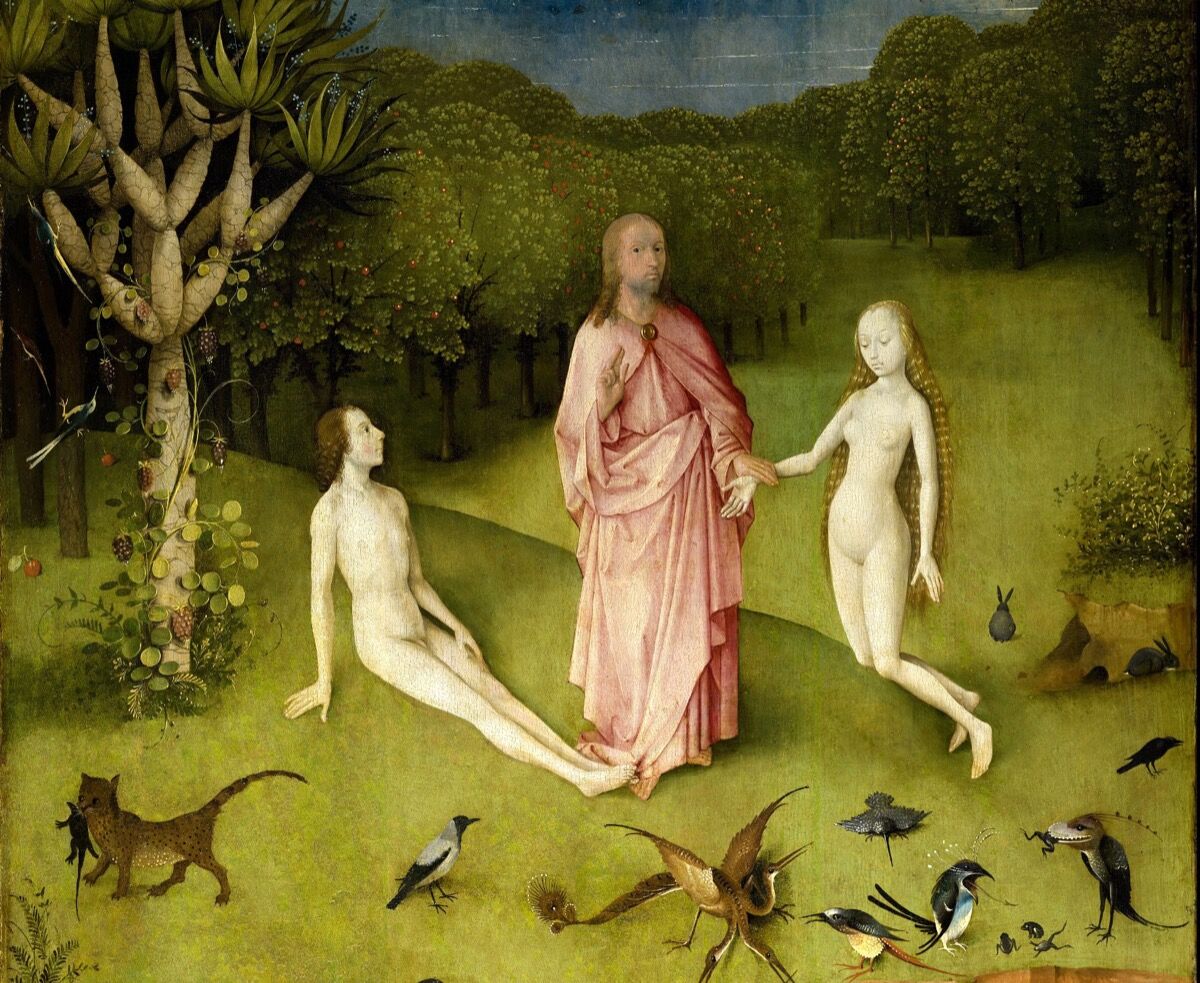 Detail of the left panel of Hieronymus Bosch, The Garden of Earthly Delights , 1490-1500. Image via Wikimedia Commons.

The central panel is the painting’s largest and shows a pleasure garden bursting with mostly nude, beautiful young things engaging in all manner of amorous acrobatics. The colors are high-key and joyous, as are the expressions on the figures’ faces and the activities they enjoy. They feast from the mouths of giant birds and huddle orgiastically inside flower petals and pools. One figure places a spray of pretty flowers into the bum of another—things get decidedly weird. As scholars like Dirk Bax and Walter S. Gibson have suggested, medieval symbolism pointing to sex is everywhere.
The setting itself—a lush garden—would have connoted lust to Bosch’s contemporaries. “For centuries, the garden had functioned as a setting for lovers and love-making,” explained Gibson in the paper “The Garden of Earthly Delights by Hieronymus Bosch: The Iconography of the Central Panel.” Bosch and his peers would have likely known about Western literature’s most famous love garden at the time, described in the 13th-century French poem Romance of the Rose, which was translated into numerous languages, including Dutch. Likewise, plucking fruit, which happens all over this panel, symbolized copulation; and Bosch’s swimming figures were likely nods to the 16th-century Dutch expression “swim in the bath of Venus,” which meant being in love. 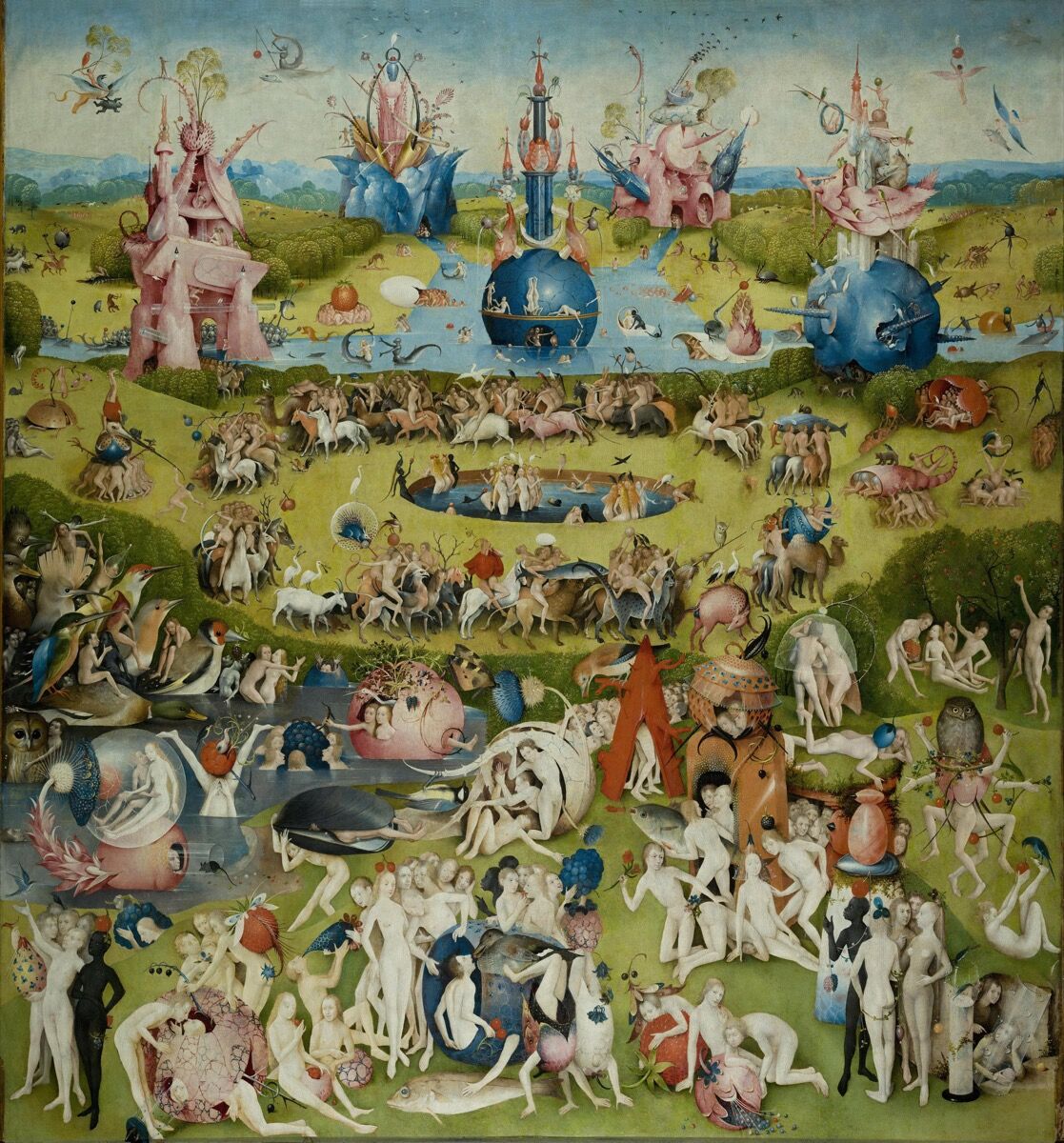 The animals that cover the central panel also evoke carnal urges. We know that fish, which crop up several times here, referenced the phallus in Old Netherlandish proverbs. The hordes of figures riding on the backs of bulls, horses, and fantastical creatures likewise allude to animal appetites and the act of sex itself. But while these figures are certainly enjoying themselves, Bosch also gestures to the ephemerality of fleshy pleasures—and to the fate that will follow.
The giant, bug-eyed owls placed on either side of the central panel hinted at evil in Bosch’s time, and as Bax and Gibson suggested, the hollow fruits dotting the landscape “signified something worthless, which was of course the way in which the medieval moralizers viewed the carnal act.” The fountain placed at the heart of the panel offers another sign that all is not well. In form, it mirrors the shimmering, crystalline wellspring seen to the left, in the Paradise panel. The surface of this one, however, is cracked, “thus conveying the idea of the ephemeral nature of earthly pleasures,” explained Silva. 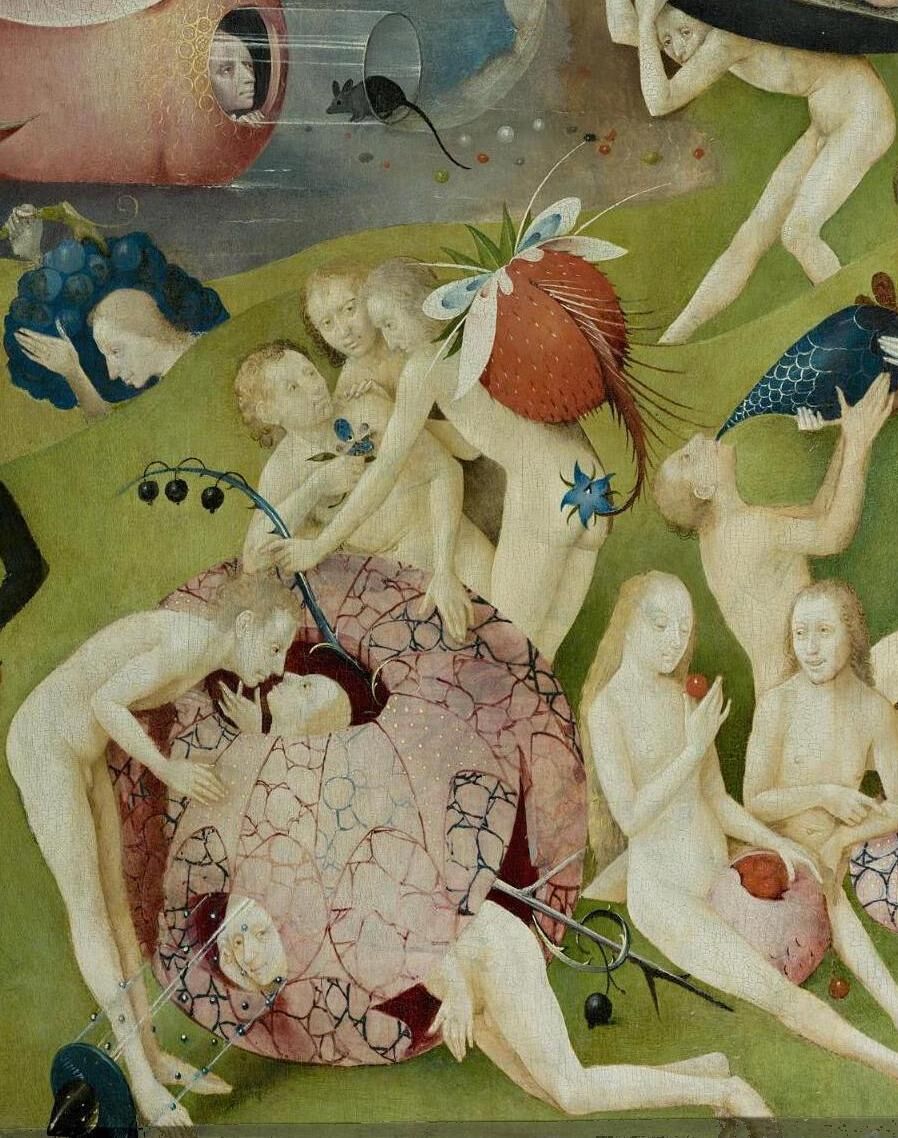 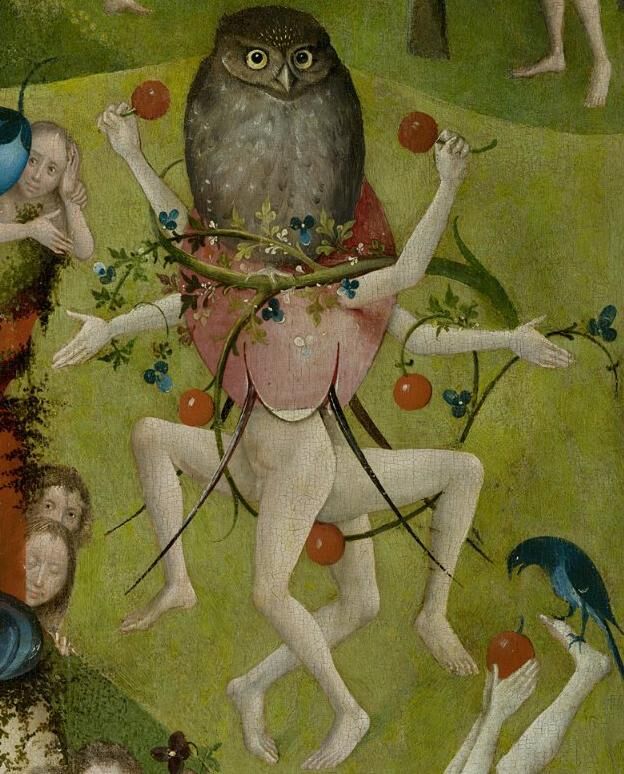 One of the earliest surviving written descriptions of the work, penned by historian and theologian Fray José Sigüenza in 1605, shared this view. Sigüenza dubbed the painting the “Strawberry Plant,” whose subject was “the vanity and glory and transient state of strawberries”—in other words, the fleeting nature of pleasure.
Today, many scholars refer to the world Bosch conjures in Garden of Earthly Delights as a false paradise leading to punishment—the final panel depicts a dusky, humorously bizarre hellscape. The connection between the world of pleasure and Hell (and its common denominator, sin) is emphasized by a continuous horizon line shared by all three panels. 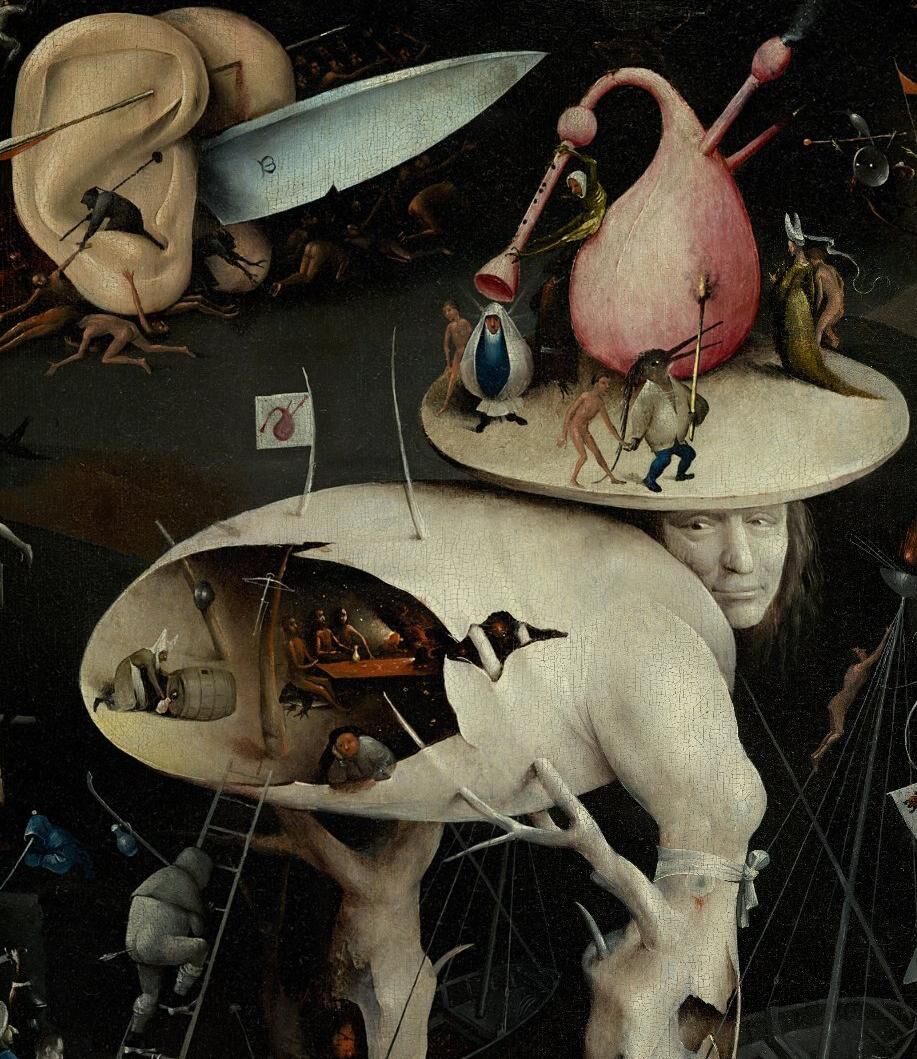 Detail of the right panel of Hieronymus Bosch, The Garden of Earthly Delights , 1490-1500. Image via Wikimedia Commons. 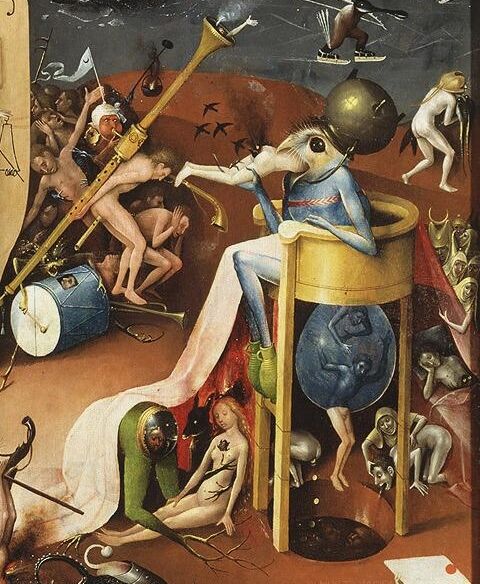 Detail of the right panel of Hieronymus Bosch, The Garden of Earthly Delights , 1490-1500. Image via Wikimedia Commons.

While lust is the dominant theme in the central panel, Bosch’s hell presents an array of vices, from lust to greed to vanity. Those being punished for playing secular music are tortured with instruments; one man is splayed on a harp, another resigned to life with sheet music written on his ass (in 2015, this score was transcribed and brought to life as “500-Year-Old Butt Song From Hell” by university student Amelia Hamrick). Other details are gorier. The avaricious are gobbled up by a bird-bug who excretes them out into an abyss of suffering souls. Gluttons fester inside the body cavity of a towering tree-man and are fed by a range of devilish varmints. Still others are crushed by colossal, disembodied ears.
There’s little doubt that Bosch’s message here was cautionary, but scholars also acknowledge that the piece was intended to be highly entertaining. For his part Falkenburg asserted that Bosch’s peers “must have been as bewildered and fascinated as we are nowadays” with the painting’s radical iconography. Figures whispering and pointing across the center panel seem to emphasize the work’s intended role as a conversation piece.
Falkenberg continued: “So maybe the function of the painting was to start a conversation—and not stop it.” Indeed, the power of Bosch’s work lies not only in its innovative, curiosity-sparking symbolism, but in its ability to harness timeless human urges and reflect them back into contemporary viewer’s worlds with mesmerizing relevancy.
Alexxa Gotthardt
Related Stories 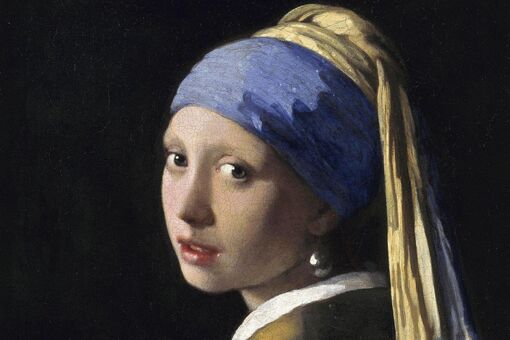 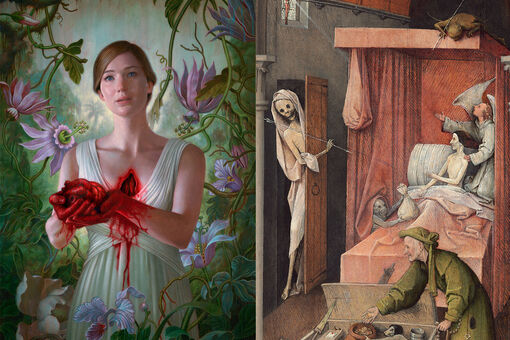 Why Bosch Is Used to Describe Everything from High Fashion to Heavy Metal
Alina Cohen
Apr 24, 2018