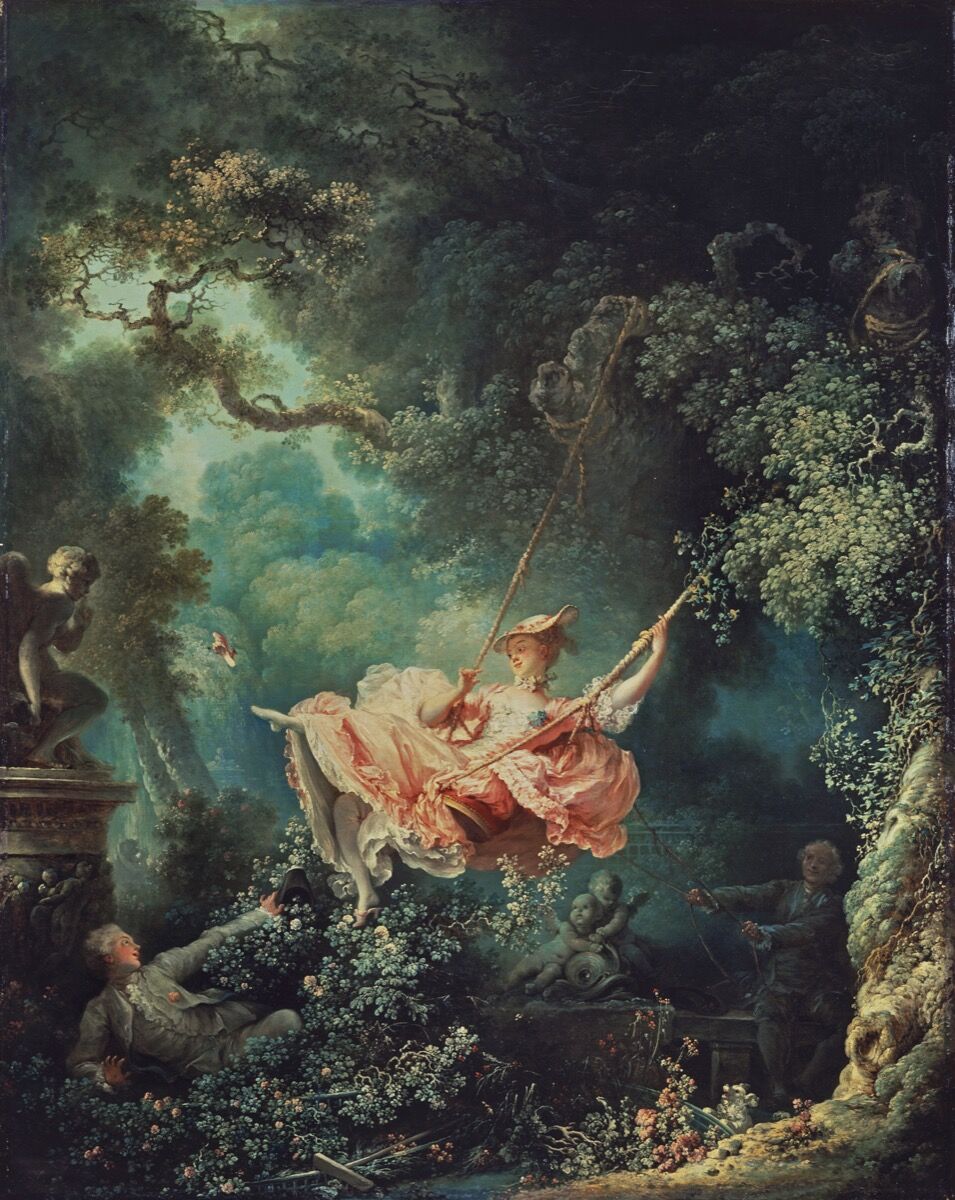 In the history of painting,
Jean-Honoré Fragonard
’s The Swing (1767) is unmatched in its frivolity and over-the-top romance. At the center of the work, a young woman clothed in a billowing, ruffled, ballet-pink dress floats in a dramatically lit clearing, rocking above the ground on a crimson-cushioned swing. She flings her kitten-heeled shoe towards a mischievous cupid sculpture while she gazes at the man sprawled in the bushes beneath her. Her paramour wears a pewter-hued suit, extends a black tricorne hat into the brush, and looks up the woman’s skirt with what can only be described as the goofiest, most love-struck grin possible. In the shadows behind her, an older man—perhaps her cuckolded husband—pulls the swing’s reins.
The decadent composition all but shouts: “Let them eat cake!” The Swing isn’t particularly relatable to the 21st-century viewer or anyone unaffiliated with the court at Paris or Versailles, nor does it offer serious truths about human nature. While there’s plenty of intrigue in the story of its making, The Swing ultimately revels in fun, fantasy, and the idealized haut monde. Its hedonistic subject and obsessive detail make it an icon of
Rococo
style and a continual source ofcreative inspiration and visual enjoyment. 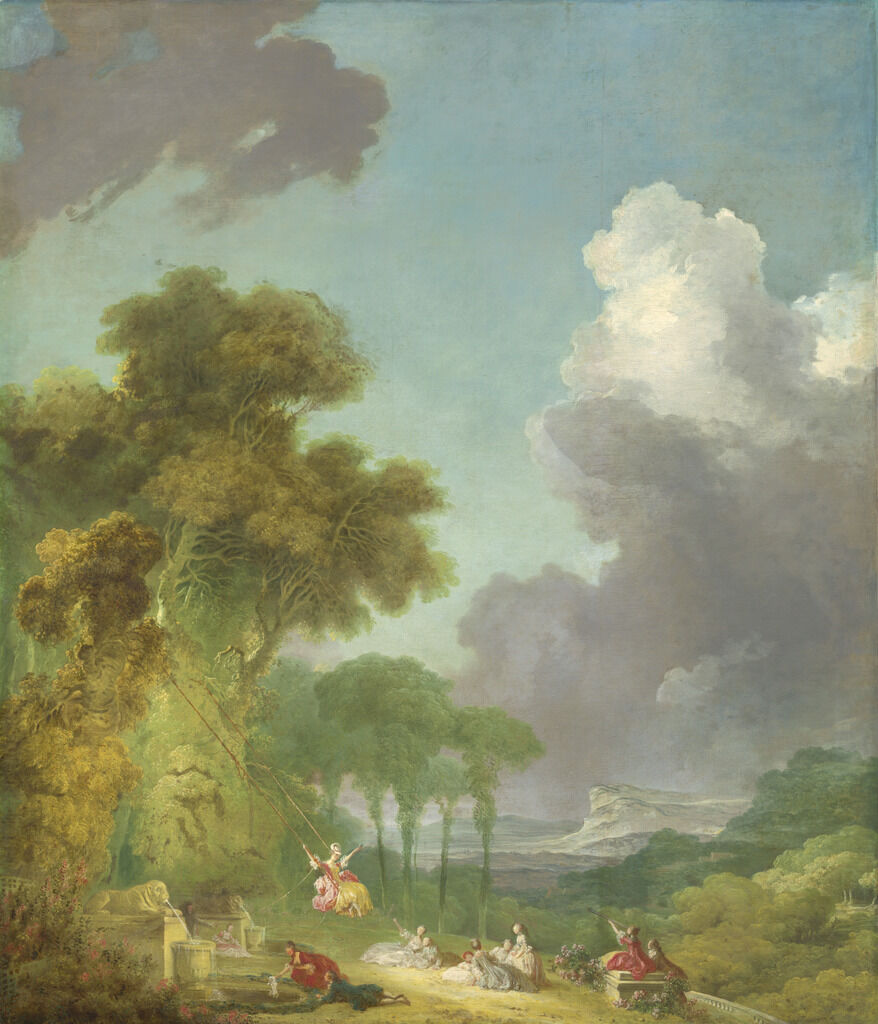 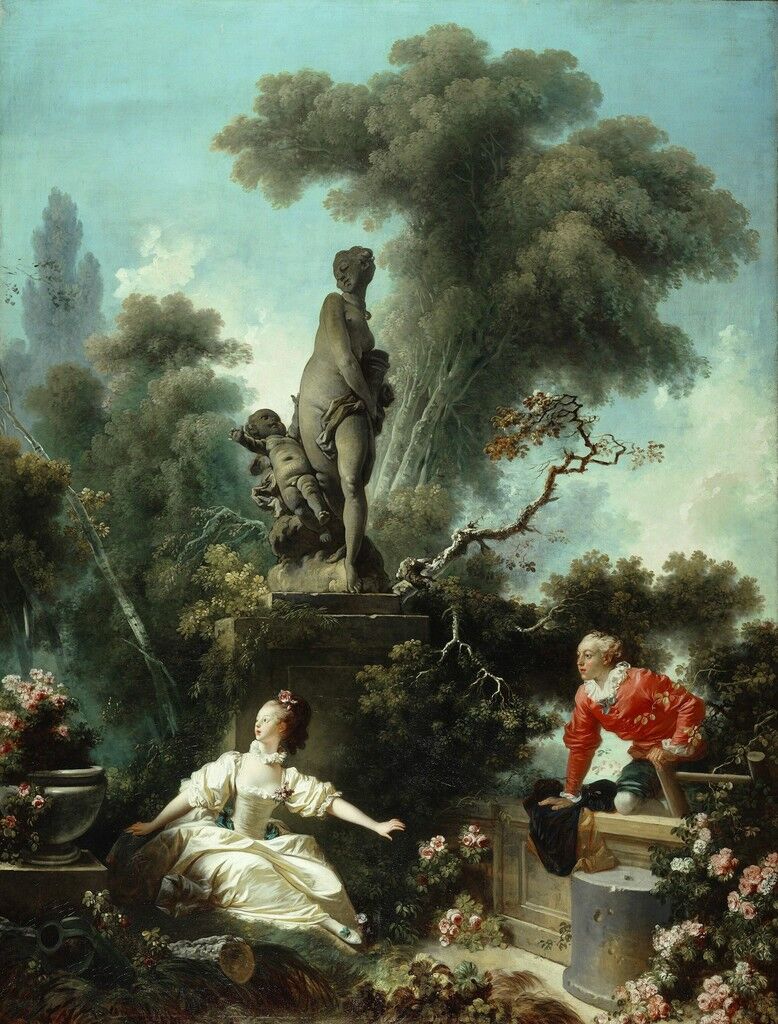 Jean-Honoré Fragonard
The Meeting (from the Loves of the Shepherds), 1771-1773
The Frick Collection, New York
Baron Louis-Guillaume Baillet de Saint-Julien commissioned The Swing from Fragonard with salacious intentions. Saint-Julien wanted a picture of his mistress that also featured him looking up the lady’s skirt. Initially, the Baron tried to hire history painter
Gabriel François Doyen
to make the work. Given the sordid nature of the task, Doyen refused. Fragonard had no such qualms—and his career benefited from it. After all, austerity was hardly in vogue throughout Marie Antoinette’s France. With the success of The Swing, Fragonard was able to successfully transition from a history painter frustrated by royal bureaucracy to a favored artist of the upper class—members of which, ostensibly, were more willing and able to pay on time.
Not only did Fragonard not mind the commission’s sleazy underpinnings, the artist also had fun with the assignment. In Heaven and the Flesh: Imagery of Desire from the Renaissance to the Rococo (1995), scholars Clive Hart and Kay Stevensoncall The Swing a “disguised representation of inverted sexual intercourse.” More colloquially, they see the painting as a cheeky implication of a sex act that situates the woman on top. Hart and Stevenson argue that the mistress actively participates in—even initiates—the flirtatious game that she and her lover are playing: As she swings back and forth, he passively gazes in adoration as he extends a long, phallic arm. 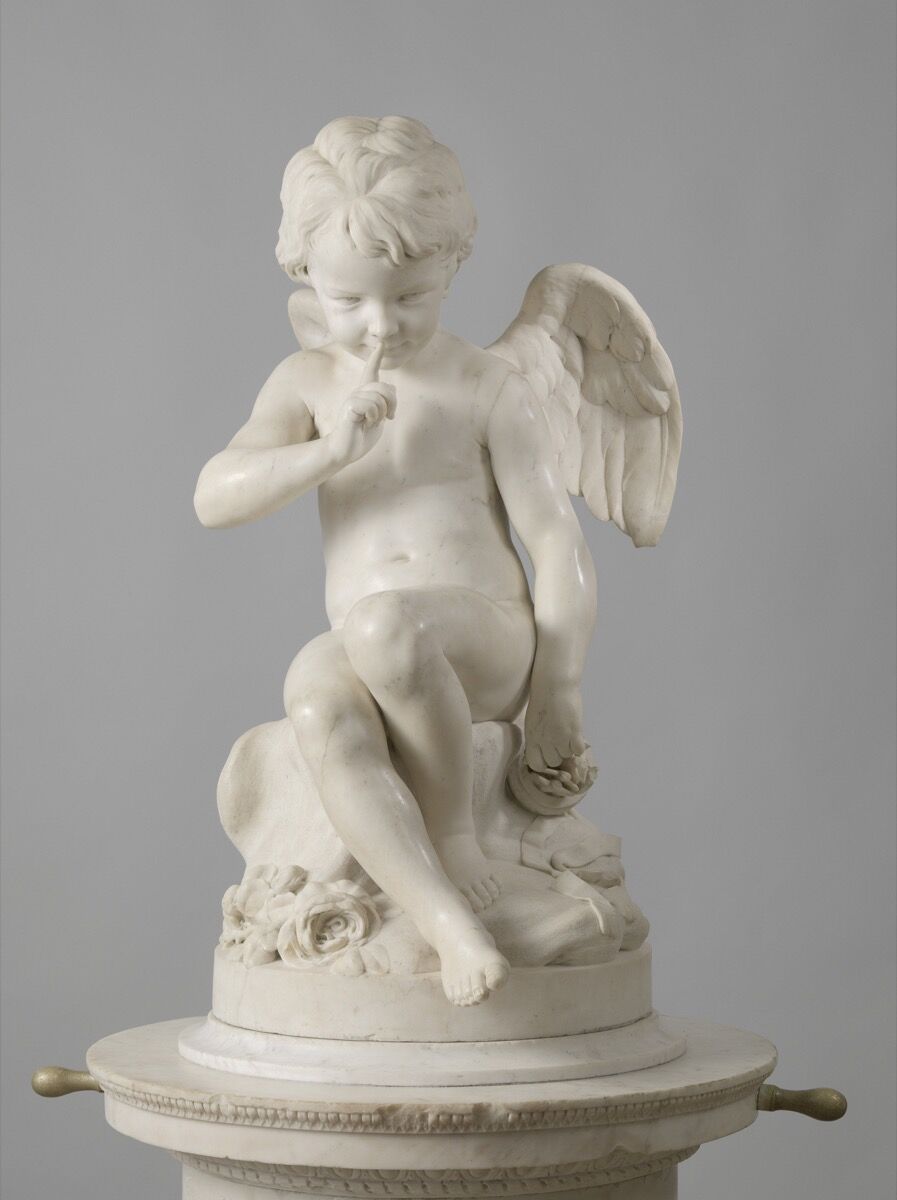 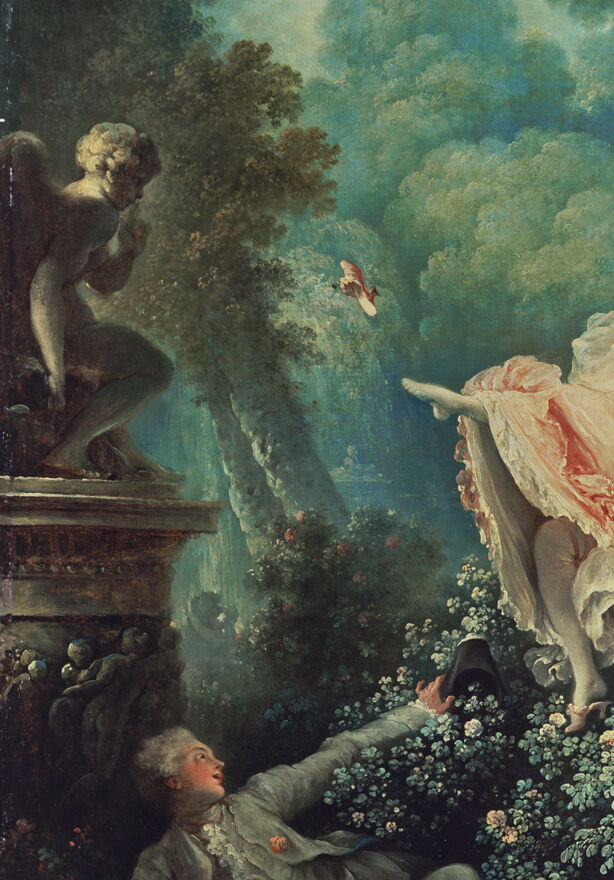 Advertisement
In her essay “Playful Constructions and Fragonard’s Swinging Scenes” (2000), art historian Jennifer Milam writes of the weighted connotations of swinging itself. She notes that swinging was a leisure activity for the aristocratic class that loosened up its participants. “With the exhilaration of vertigo play, swinging permitted occasions of sexual disorder where uninhibited positions revealed the body and spectators glimpsed views that were usually hidden from sight,” she observes. As participants flew through the air, typical social decorum ceased in favor of play and erotic looking. Milam muses that Fragonard’s lush, loose brushwork seamlessly connects with the content of the work.
The cupid statue is another potent erotic symbol. Fragonard modeled if off the 1757 sculpture L’Amour Menaçant (“Menacing Love”) that
Etienne-Maurice Falconet
made for Madame de Pompadour, King Louis XV’s mistress and a powerful art patron. Invoking this work, Fragonard suggested illicit love at the most elite levels of French society.
Within the larger art-historical tradition, The Swing riffs on the genre of boudoir paintings—canvases that feature a woman in her private chambers, primed or procured for a romantic liaison. In contrast, the activity of The Swing takes place outside. The decision to situate the ménage-à-trois in an overgrown garden both foreshadows the impending
Romantic
era’s emphasis on nature and allows the central female figure to take a more active role in the scene. In 18th-century France, gardens were becoming romantic sites of bourgeois escape; the fashionably dressed woman here appears like a flower in full bloom. The natural setting also contributes to the keen sense of romantic storytelling embedded in Fragonard’s masterpiece. The Swing, Hart and Stevenson write, “is discursive almost to a fault, encouraging witty, brittle, scabrous salon talk.” 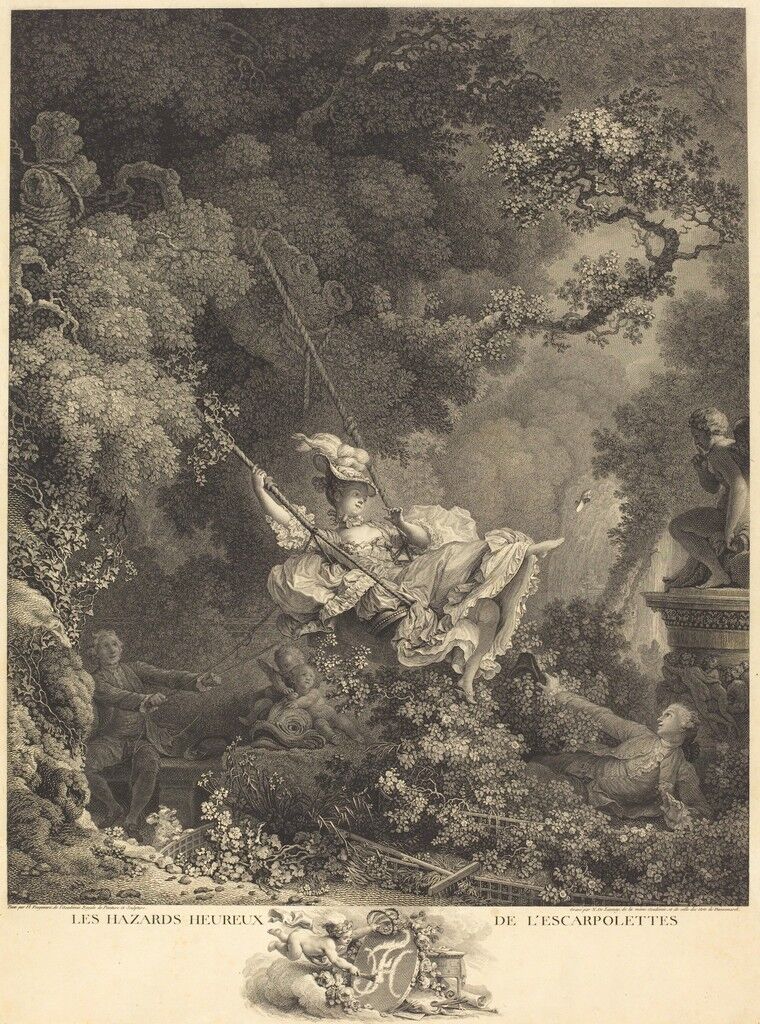 Nicolas Delaunay after Jean-Honoré Fragonard
Les Hazards heureux de l'Escarpolette, probably 1782
National Gallery of Art, Washington D.C.
The Swing’s implied narrative, like the best gossip, has contributed to the painting’s enduring popularity among aesthetes and sophisticates—scandal never gets old. In 2001,
Yinka Shonibare
created an installation that brings the painting’s central figure into three dimensions and adds a multicultural character; it features a dark-skinned mannequin clothed in the Dutch wax print that’s popular in West Africa. In a less highbrow homage, Disney’s Frozen (2013) riffed on the painting with a swinging scene for Anna, its central character.
It’s no surprise, however, that famed shoe designer Manolo Blahnik, whose swank heels cluttered Carrie Bradshaw’s closet in Sex and the City and adorned Kirsten Dunst’s feet in Sofia Coppola’s Marie Antoinette (2006), is a fan of The Swing. An exhibition featuring Blahnik’s designs, entitled “An Enquiring Mind,” at London’s Wallace Collection, which owns the painting (the exhibition is on view through October 27th), pairs The Swing with modern pink satin mules nearly identical to the shoe flying off the protagonist’s foot in the work.Few viewers may be able to enjoy the luxuries of owning Manolo Blahniks or living in Fragonardian decadence—but at least museum tickets are free.
Alina Cohen
Related Stories

10 Artworks That Defined the Rococo Style