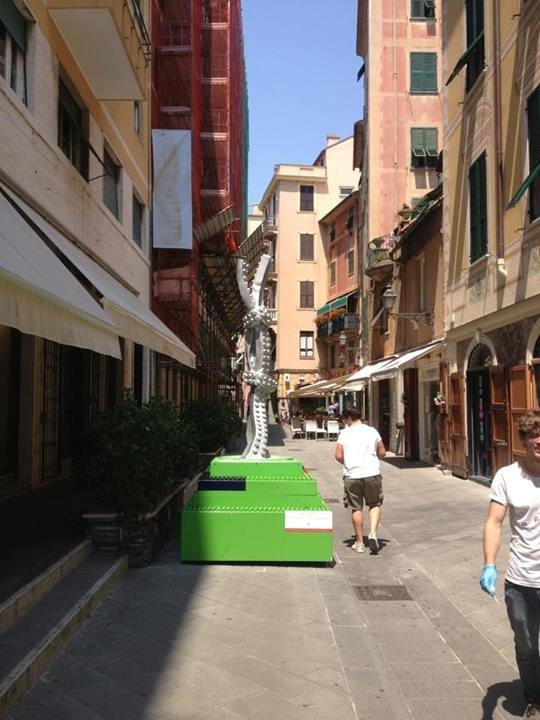 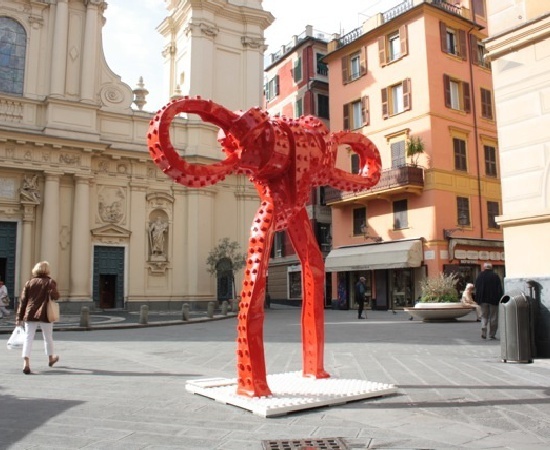 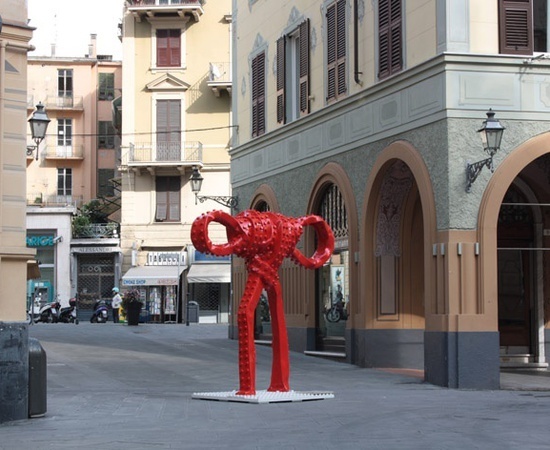 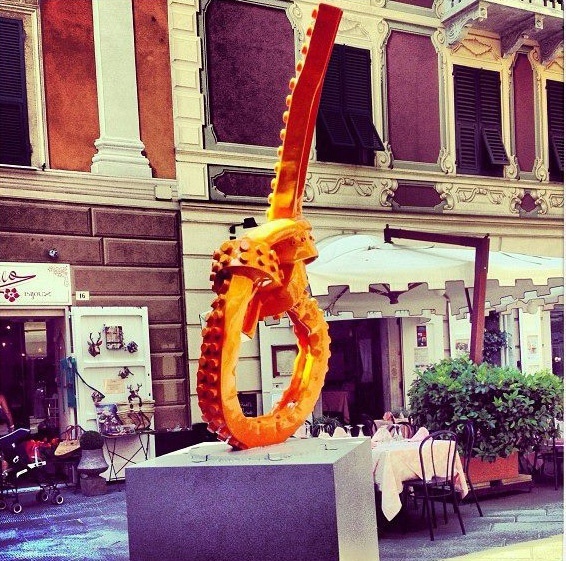 The initiative, sponsored by the City of Santa Margherita Ligure, organized by ABC- ARTE, includes a solo of the artist at the exhibition spaces of Cerruti Art in Santa Margherita Ligure , an event of culture and art, born as a moment of synergy between the public and private, institutions and civil society , to stimulate the involvement and participation of young people. The new sculture A me gli occhi will no longer have the shape of the knot, but the one of a bow that will be proposed as a noninvasive element, almost alarming in the peaceful and harmonious tranquility of Santa Margherita Ligure. A bow that as a drone emerges from the base of the work evertopping the Ligurian town. The bow of Matteo Negri in an antithetical manner to that of Jeff Koons will appear at times awkward and threatening.
As operation of public art will also be offered two main lego knot, Our Day Will Come and Space Dynamics that will refer to those of smaller size in the gallery Cerruti Art : The Lover's Loop, At The End of The Day. In the solo exhibition it can also be admired both works in ceramics such as Yellow Unexploded, and tributes to Mondrian such as the Ego Mondrian, and to Alighiero Boetti where sculptures and prints - L'ego Maps- will arise in a dialogue among themselves and other spherical and parabolic forms showed .
Matteo Negri ( San Donato Milanese, 1982) graduated in sculpture at the Academy of Fine Arts of Brera . He has worked and exhibited in a various important galleries, public spaces and art fairs in cities such as Brussels, Berlin , Hong Kong, London , Miami , Milan, Rome , Paris. The artist , already accustomed to the urban raid with his works , as in Paris , London and Genoa, where he has just completed a work entitled A Supposedly Fun Thing I 'll never do again at the gallery ABCARTE: the exhibition , in addition to the space of the gallery, has also affected the city center where , for months from Piazza De Ferrari to Via Roma and Via XX Settembre, the sculptures of Matteo Negri were able to converse with the urban space and to intrigue who passes by. Form and visual referent of Matteo Negri is the iconic LEGO brick , from the evident phonetic- scriptural consonance with the Ego , psychic structure Member of the relationship with reality and exchange with each other. The playful aspect of the well-known game and constructive changes sign in the Danish artist's project , which redefines their volumes , and molding them riannodandoli in an unusual vision . In the training phase , those who had the chance to play , they turn to the challenge of planning.
The initiative is sponsored by the City of Santa Margherita Ligure, the sponsorship of Banco di Chiavari and Riviera Ligure - the Banco Popolare Group and the technical sponsorship of SIAT.