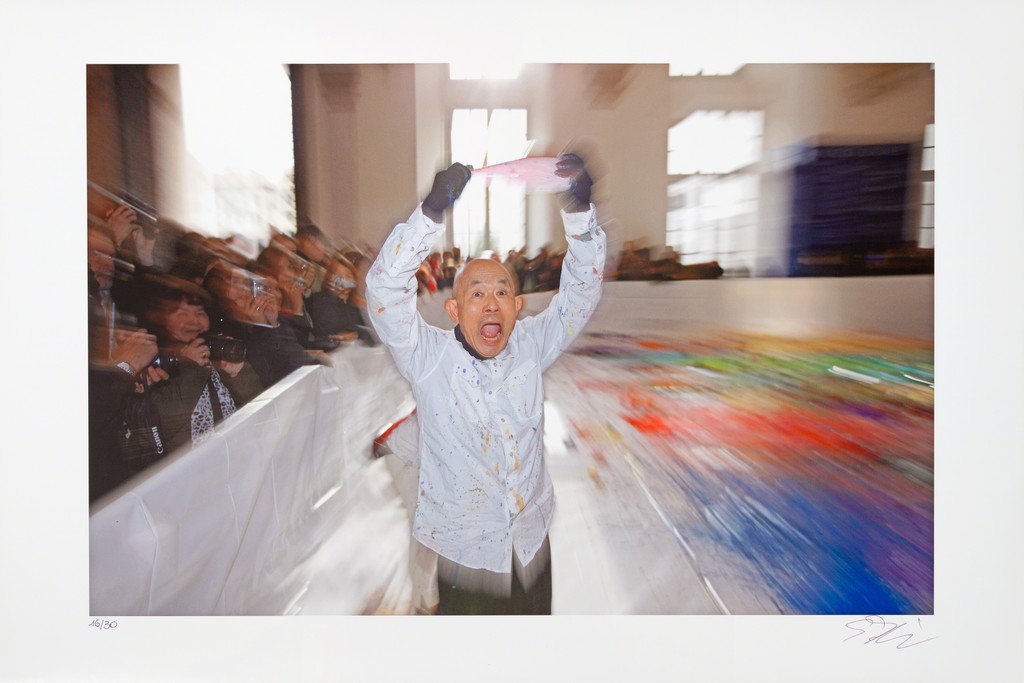 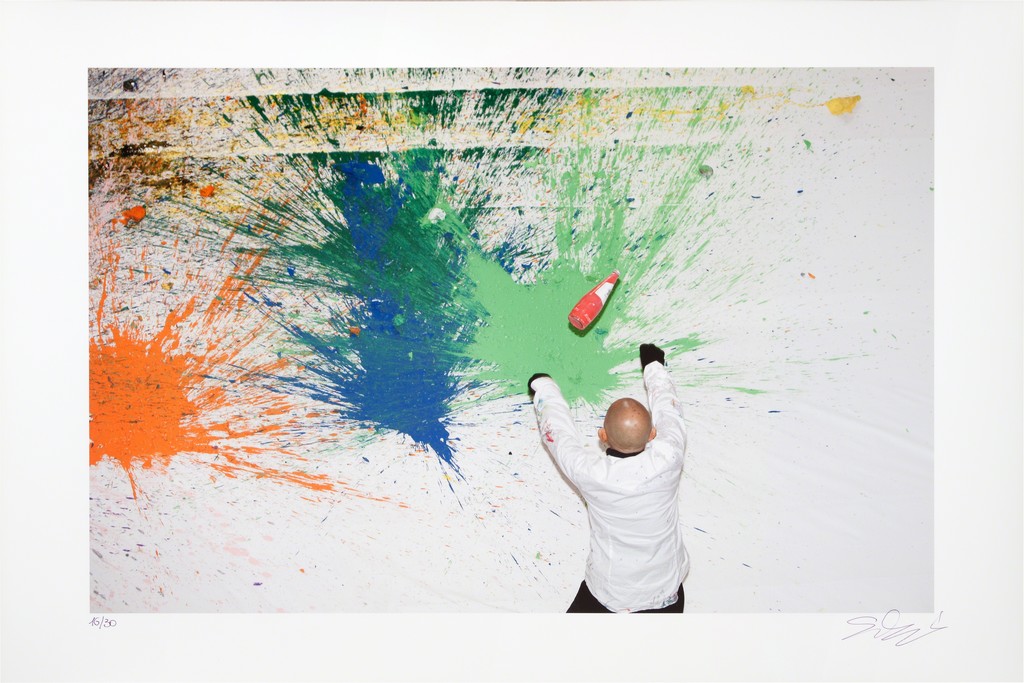 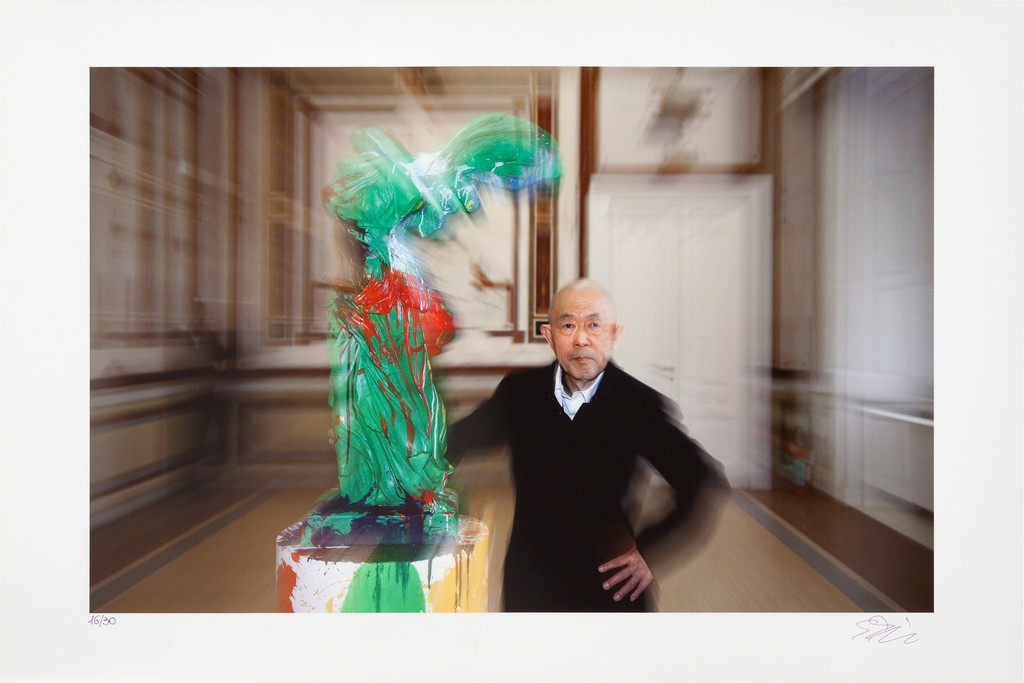 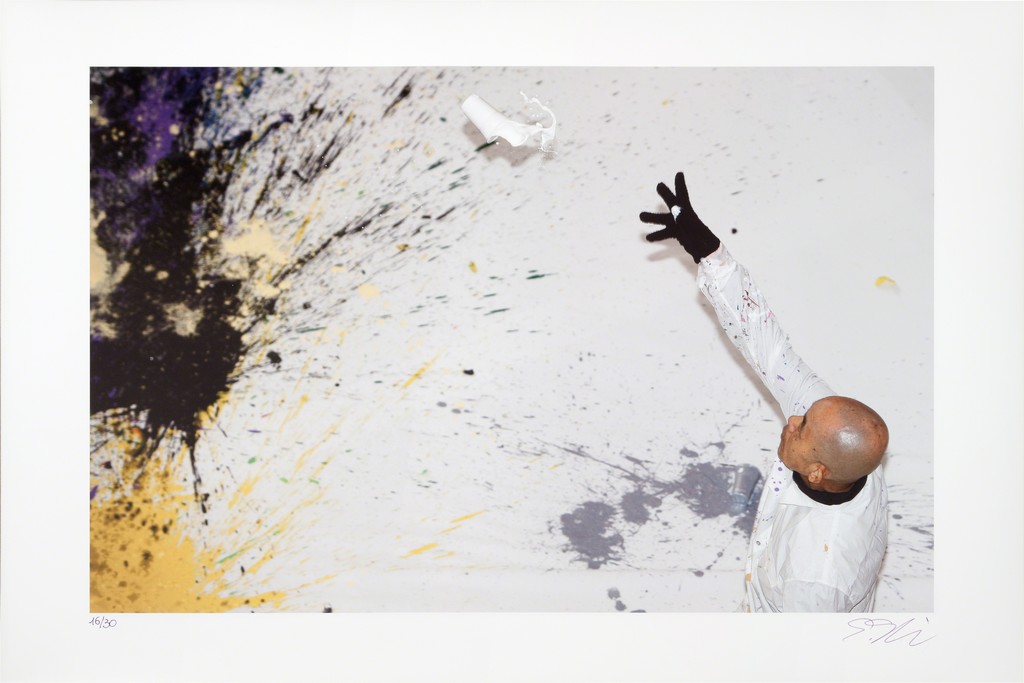 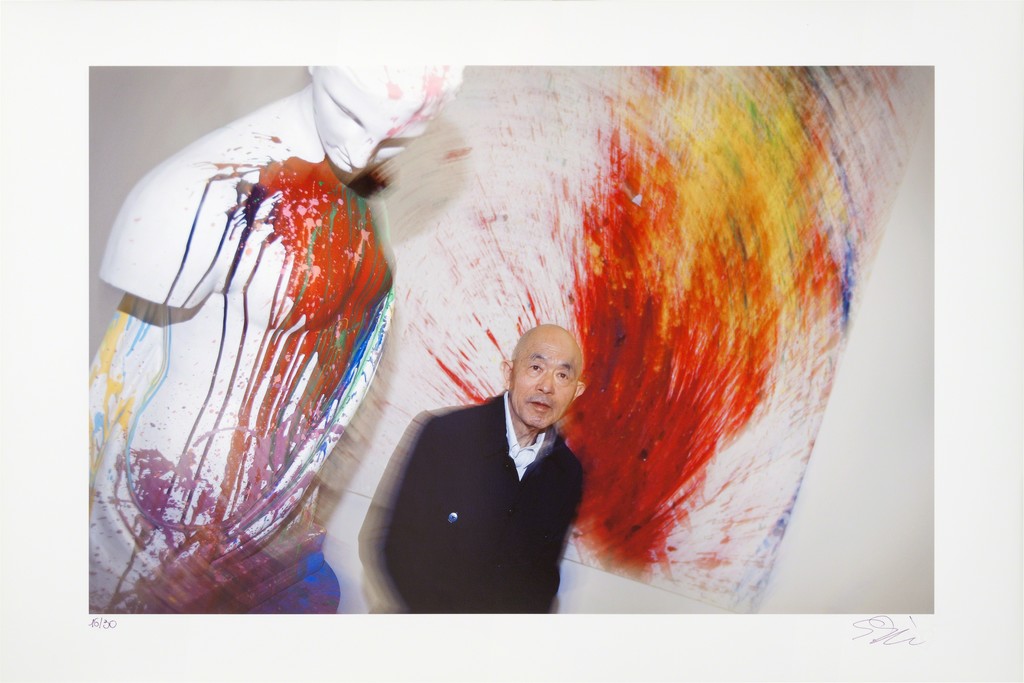 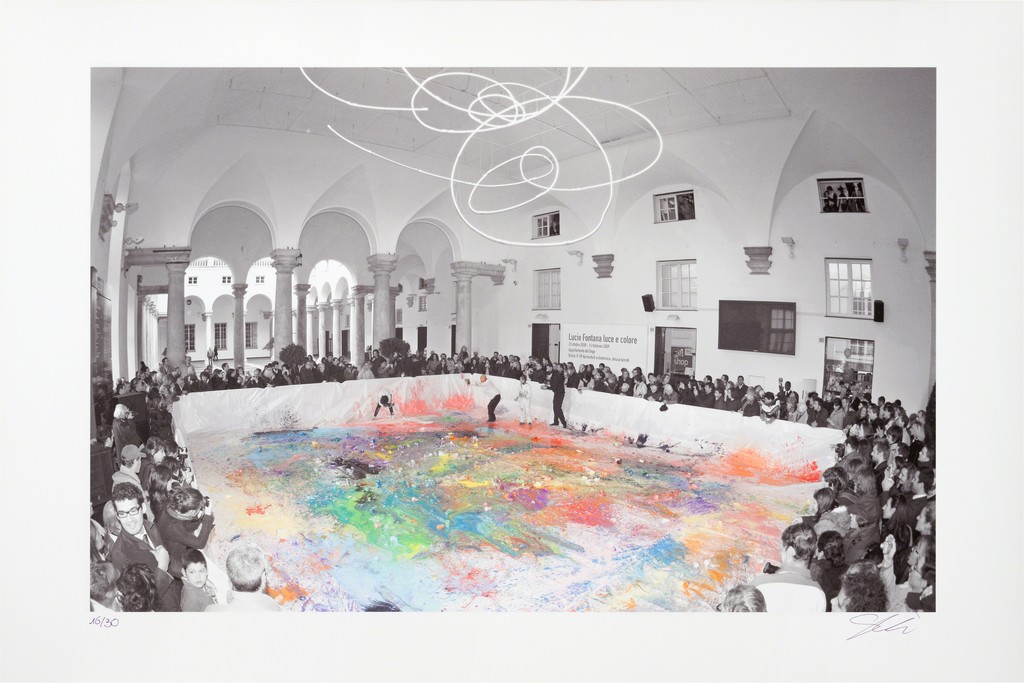 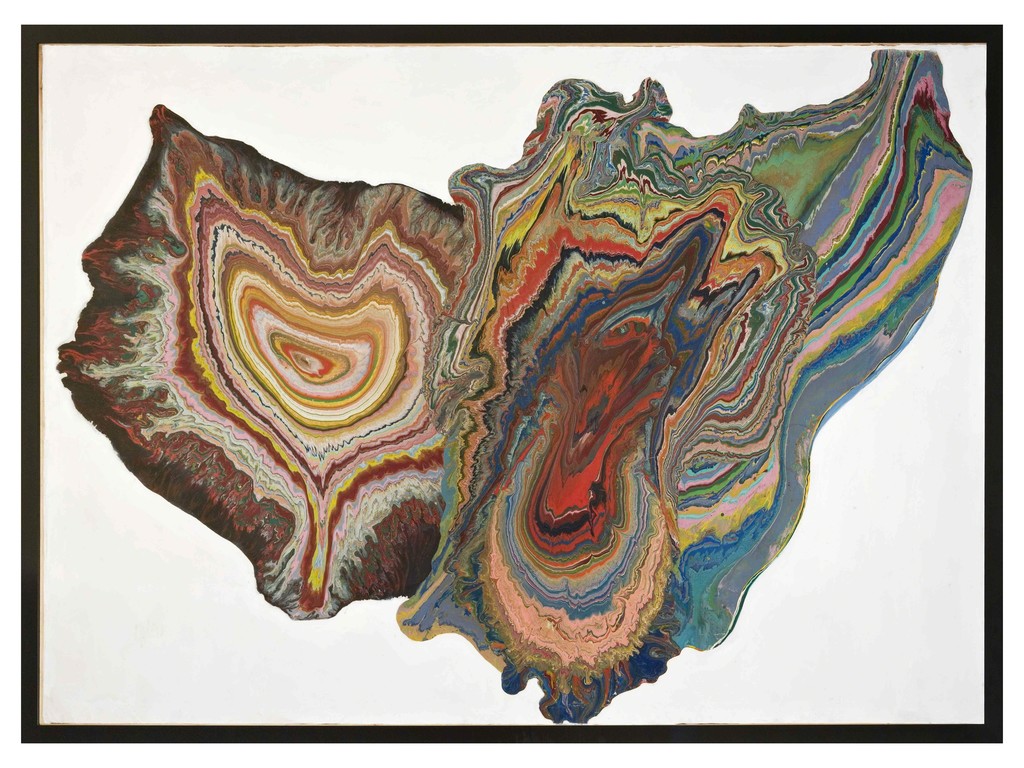 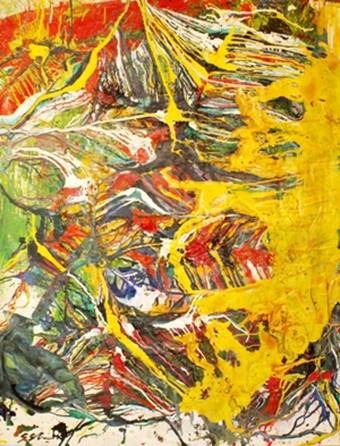 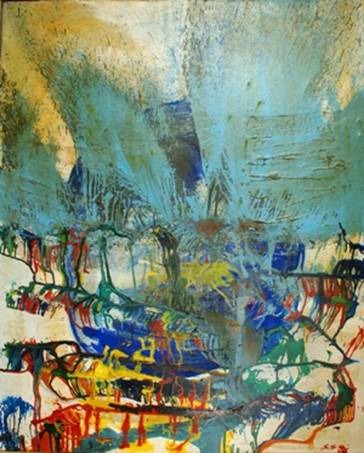 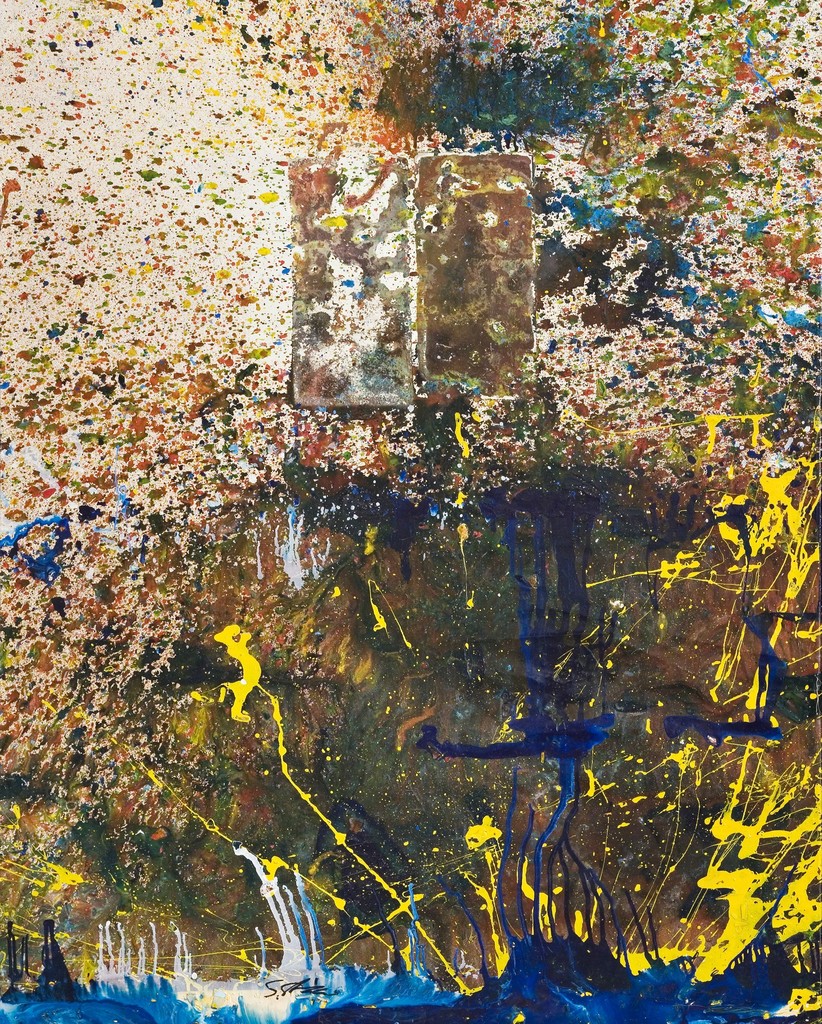 From 13rd November 2008 to 8th March 2009, Villa Croce Contemporary Art Museum hosted a personal exhibition dedicated to the Japanese artist Shozo Shimamoto. The initiative curator is Achille Bonito Oliva, and the project was organized by Antonio Borghese.
The project included a complete artworks selection from 1950s to most recent works, realized at the last Biennale di Venezia edition and in May 2008 during Naples and Capri Performances. Moreover, it traced the whole artistic course of the Japanese Master and witnesses his work performing and poetic dimension also through several videos.
Shozo Shimamoto was a main character in the contemporary visual research. His production begins in Japan and it was placed inside Gutai movement in the early 1950s and continues, since then, with a great and increasing international consensus.
The Movement, born in Japan in 1954, was addressed to a way of making Art connected to �action-painting� and used expressive forms typical of happenings and performances, �aimed to banish the paintbrush�, as Shimamoto himself begins his poetic Manifesto in 1957.
To �free colors from the paintbrush� Gutai artists replace it with every kind of instruments able to exalt coloring matter quality, like hands, feet, skates, toys, watering cans and cannons.
Shimamoto was the discoverer of a new way of considering painting, a spectacular and multimedia forms promoter, and the creator of a virtual bridge connecting Occidental artistic avant-garde and Japanese Zen Calligraphy tradition.
Placed in a crucial position inside the contemporary artistic environment, Shimamoto became, as Achille Bonito Oliva writes: "a wondering art samurai succeeding in hitting the target, assisted by the creative process sharp chance, willing to pierce the world inertia and instill strength into the human community".
For the opening, on Thursday 13rd November, at 2 pm, the artist will perform, in Matteotti Square, the event Shozo Shimamoto / Samurai, acrobat of the sight, with the collaboration of Phoebe Neville and the Fluxus artist Philip Corner. During this performance, organized by Abc Arte, the Master, hanged by a crane, will throw colors on a large canvas stretched on the square paving. The event will be animated also by objects, performer creating sounds, colors, movements and a vital power typical of the artist.
Shimamoto was not interested only in Art: as a matter of fact, he connected to his artistic career a strong commitment to sustain and defend peace. His production can be understood as a way to stimulate vital energies able to affirm a pacifist feeling: for this reason, in 1996, he was also candidated to win the Peace Nobel Prize.
The exhibition was under the Patronage of Premiership of the Council of Ministers, Ministry of Cultural Affaires, Japanese General Council, Liguria Region and Genoa Municipality.
A catalogue published by Skira, collects the whole visual documentation on Shimamoto work, Achille Bonito Oliva, Lorenzo Mango and the Master's texts.