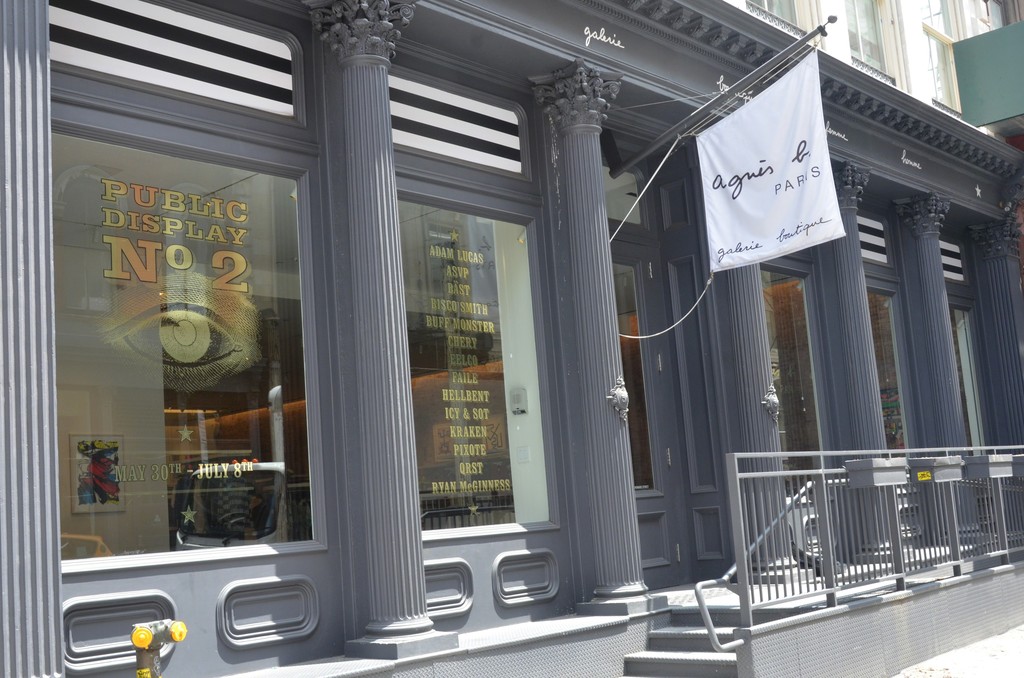 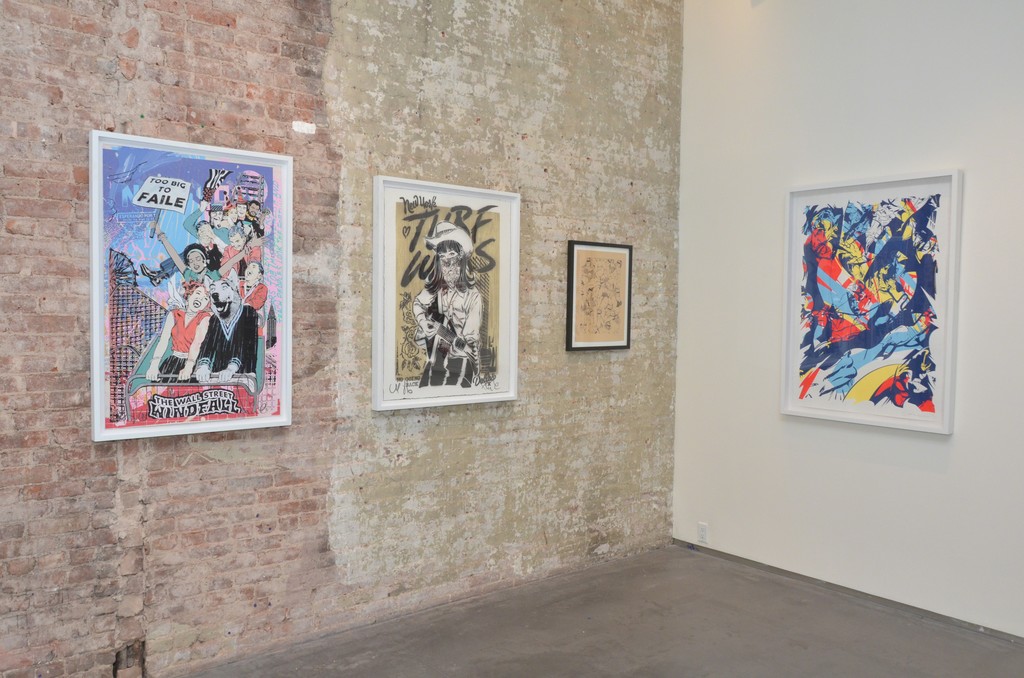 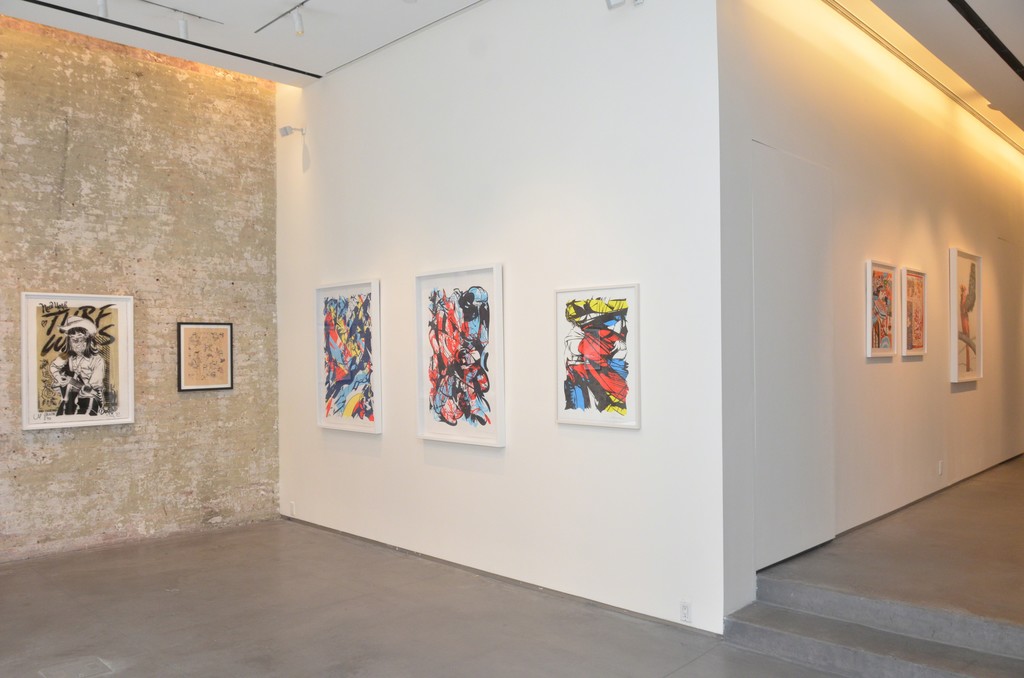 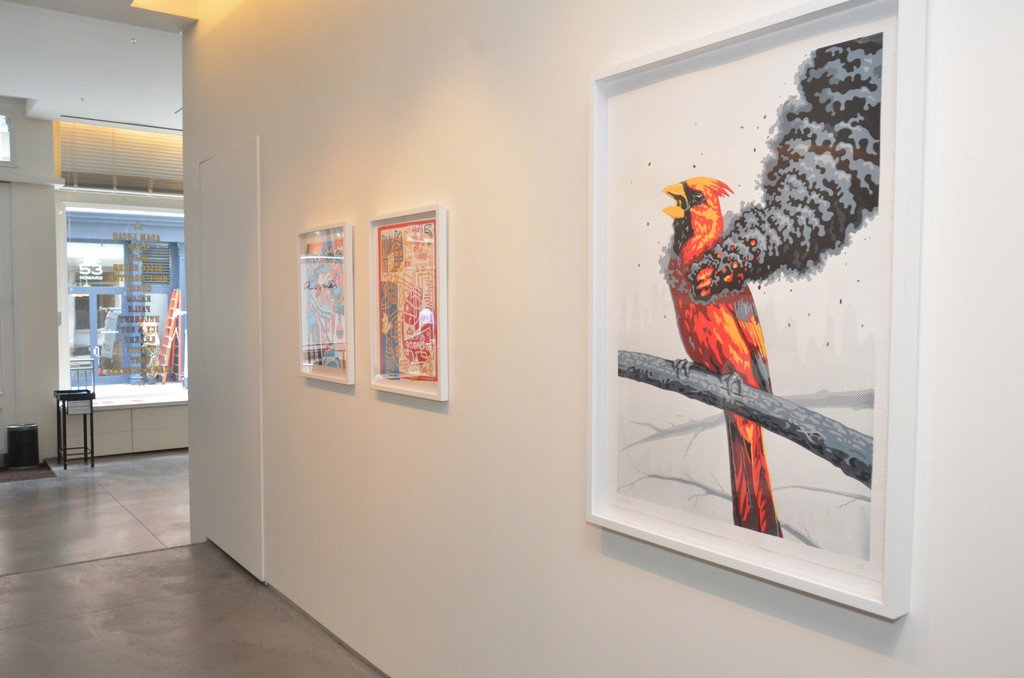 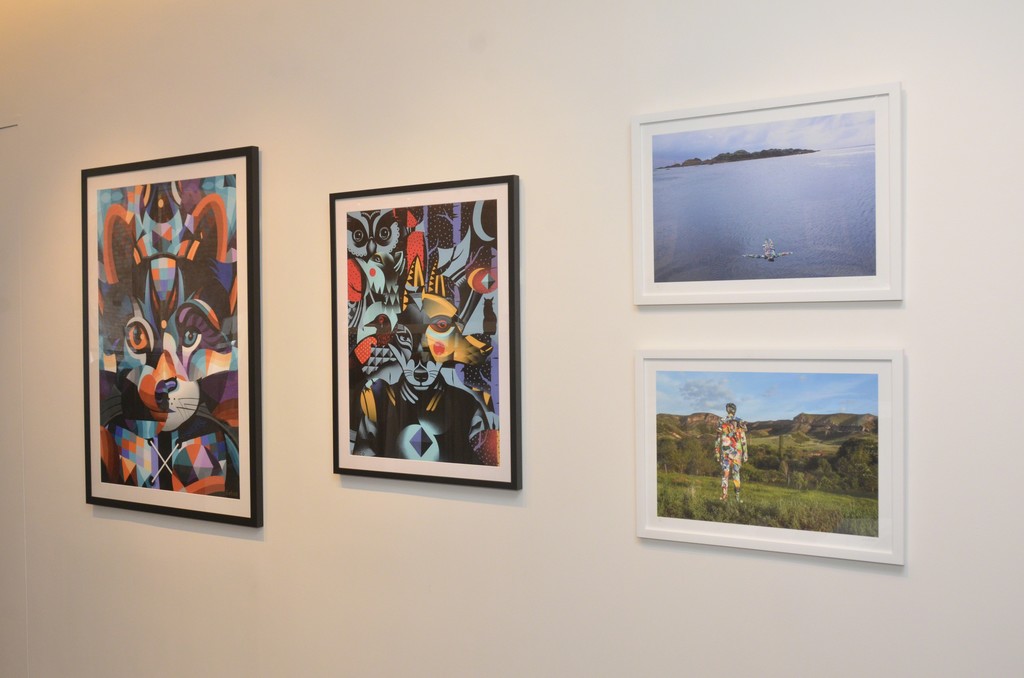 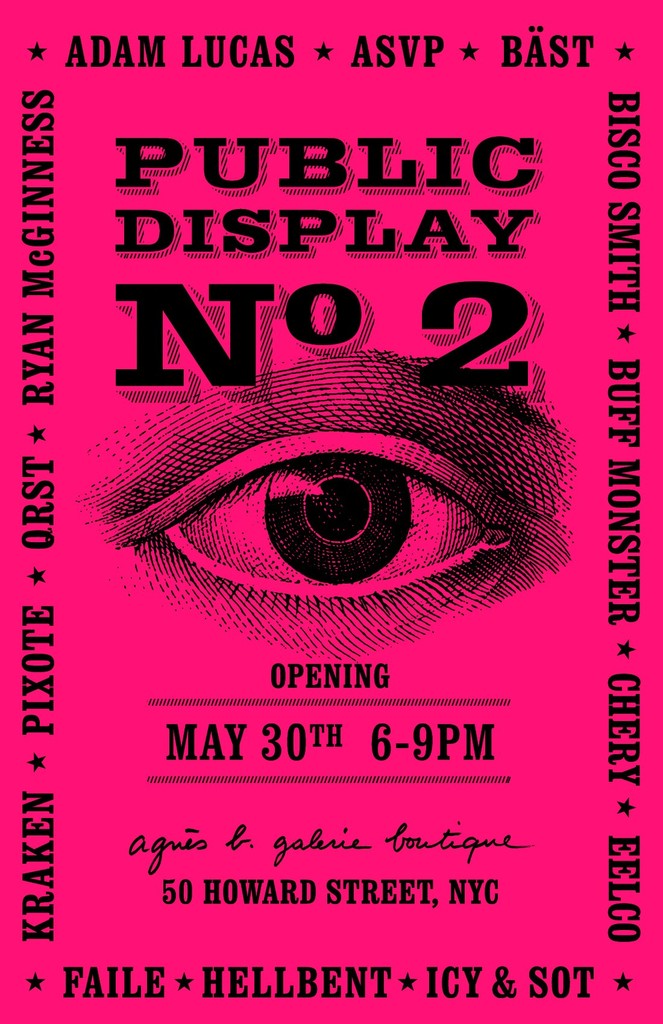 agnès b. is pleased to announce the opening of “Public Display Nº2” at the agnès b. Galerie Boutique in Soho, NYC. Curated by agnès b. and ASVP, the group exhibition will feature screen prints and limited editions and will be the second gallery collaboration between the Paris-based designer and the Brooklyn-based duo. The exhibition opens May 30 and runs through July 8.

Art in the streets is free for all, up for grabs, referential, post-currency future, meta global, plein air: public display. It positions itself (non-self) as a radical retort to the unsayable––talking back. The outside brought indoors is a mirror strategically placed, out of context, appropriated; curation of wildness. Have a look. Can you take it home with you? What is a turf war without borders? Art in the streets is part of the daily landscape, fixed but changeable. A state of awareness. A breathing ocean, meltdown, lovesong, soma(tics), elevation, howling, a windfall. These are their words, their indelible traces left behind for eternity, whatever and wherever that is.

ASVP have been a staple in the New York City street artscene for almost a decade. BÄST is one of Brooklyn’s original street art forces, blending Pop Art and Abstract Expressionism into his day-glo tinged visions. Bisco Smith works in a variety of formats, from murals to canvas, known for his visual freestyle. Buff Monster makes the world a better place with bright colors, bold lines, and humor. Chery blends natural and urban elements into an inextricable bond with a hint of dark wit. EELCO is a Dutch street artist with a unique color palette he developed mostly on the streets. FAILE is a Brooklyn-based painting and printmaking collaboration between Patrick McNeil and Patrick Miller, founded in 1999. Adam Lucas’s street art is blunt and forthright, using wit and subversion in his design. Hellbent is known for his vibrant use of color and pattern. Icy & Sot live in Brooklyn by way of Iran, making work that uses public art to envision a world freed from borders, war, and violence. Kraken’s exquisitely painted or drawn works are an accumulation of human and animal body parts, collected and collaged from all sources, layered with human emotion. Ryan McGinness makes multidisciplinary work featuring logos, signs, and intricate patterns. Brazil-born PIXOTE has been in NYC since the 90s and has developed his own pixação-influenced style of script. QRST is Criminy Johnson whose work uses allegorical images often in an esoteric and cryptic manner.

agnès b. is a privately owned, family operated French company founded in 1975 that today includes 282 stores, two contemporary art galleries, and the hybrid art periodical Point d’Ironie. In 2016, the company celebrated its 40-year anniversary with the publication of agnès b. Styliste, a 288-page clothbound book that offers a look into the agnès b. universe. For more information, please visit www.agnesb.com.

About the agnès b. Galerie Boutique

The agnès b. Galerie Boutique in Soho, New York, opened in 2011 and was the first agnès b. retail location with a dedicated art space. Part gallery, part boutique, it uniquely combines art and fashion, hosting several exhibitions each year with a focus on contemporary photography, painting, and sculpture. For more information, please visit www.50howardstreet.com.