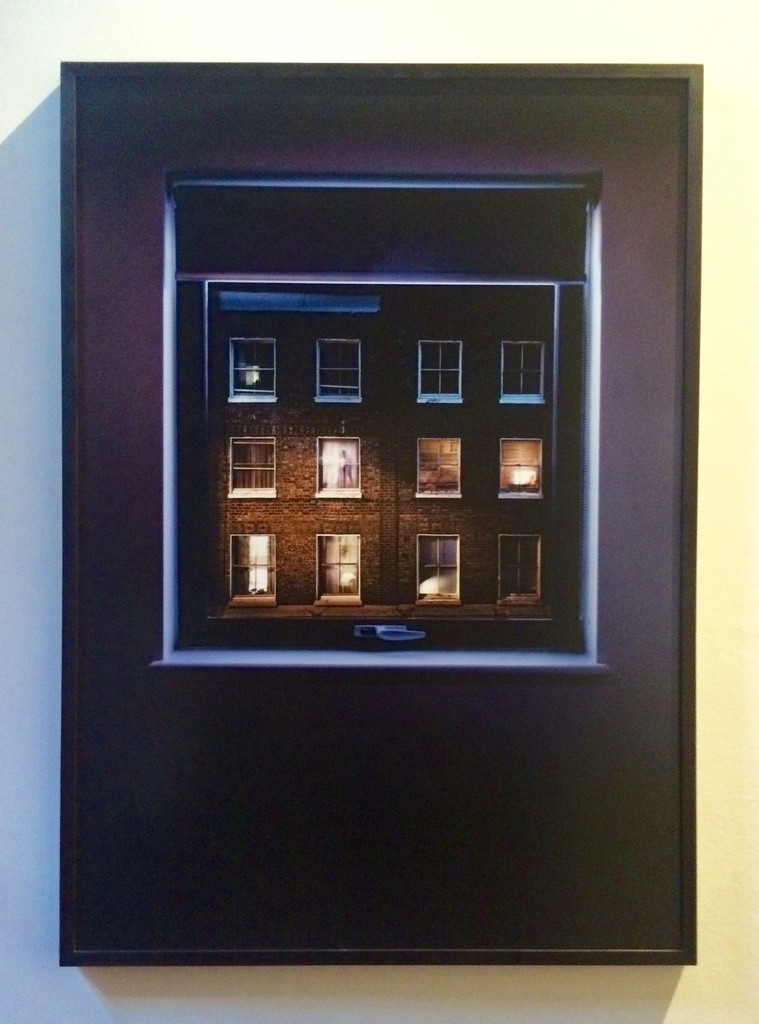 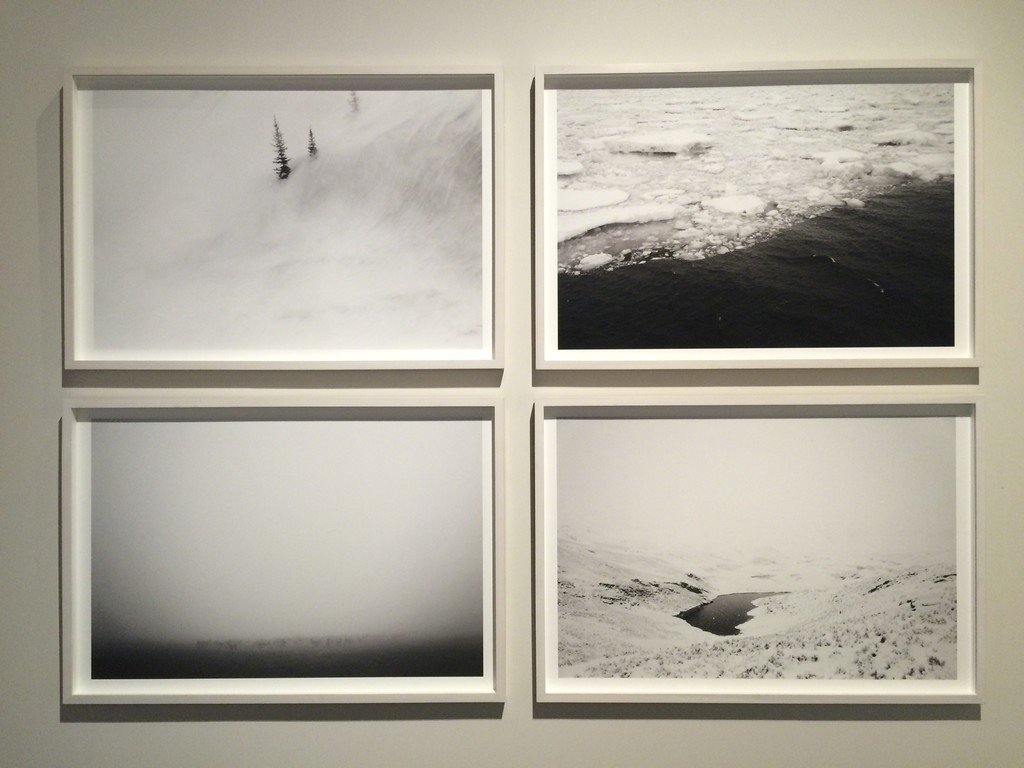 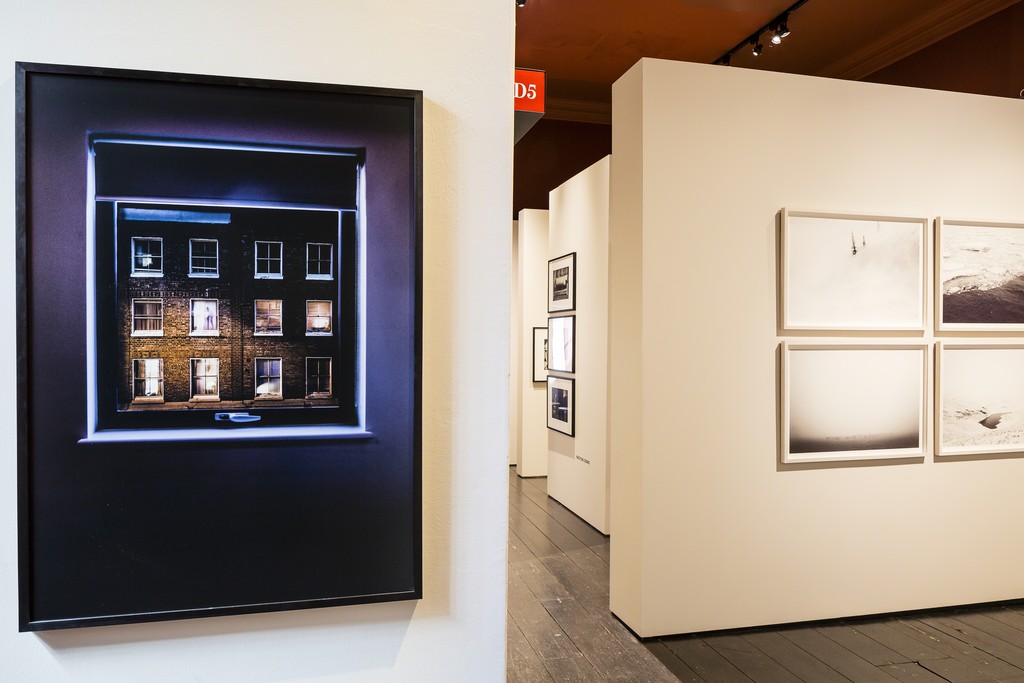 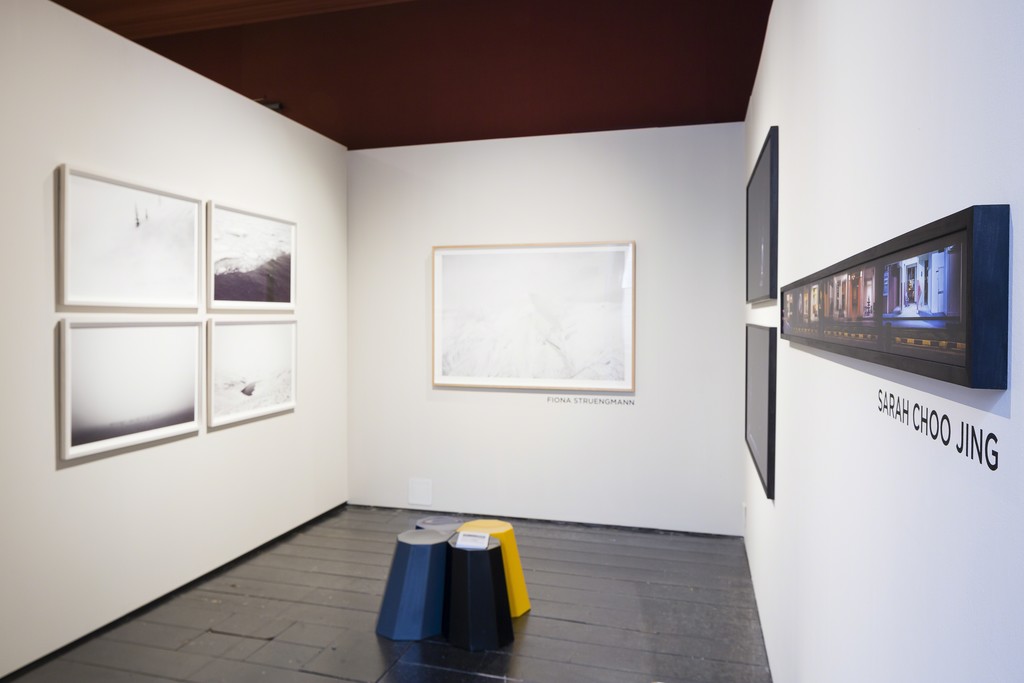 A.I. is pleased to introduce Sarah Choo Jing (b.1990, Singapore) and Fiona Struengmann (b.1986, Germany). The exhibited works reveal the artists operating in distinctly separate landscapes.

Alienated communities and silent streets riddle the photography of Sarah Choo Jing. Choo’s landscapes are shot in a nocturnal mood capturing a moment when urban denizens are lost in thought as they linger in the city. The viewer becomes a stroller, an idler - a flâneur. The experience is layered for each viewer, since they enter each scene at the artist’s cue but also provoked by their own memory bank.

'Waiting for the Elevator' (2014) is a multi-channel looped video composite and print (17cm x 200cm). It depicts a documentation of several events at the street level of different housing estates across Singapore combined into one uninterrupted panorama. These openings, ironically known as “void decks”, were intentionally designed as community spaces. In work that combines aspects of Edward Hopper’s filmic landscapes (Early Sunday Morning, 1930) with an uncanny quality similar to Gregory Crewdson (Twilight series, 1999), viewers witness isolated individuals immersed in seemingly repetitive routines such as smoking, resting or talking on the mobile. Unlike Choo’s earlier staged works, the characters are unaware of the artist’s camera. A sense of anticipation is prolonged by the continuous length of street, the accompanying suspenseful music, as well as the individuals’ repetitive actions. The transition between ordinary scenes transports viewers in time and space so that they become the ones waiting for the elevator, waiting for something to happen.

Shot from Choo’s bedroom window in London, 'It was a Tuesday like any other Tuesday' (2013) is a print (91cm x 130cm) based on a single channel looped video composite that documents the actions and routines of several residents living across the road. Here, characters are observed in their domestic space and the viewer is given an introspective, almost voyeuristic glimpse. The chosen viewpoint is carefully considered. It is no longer just the artist but also the viewer’s presence –especially by reason of the internal windowsill –that can be sensed in the photograph. The composition has been conceived in a familiar cool blue of twilight and a gauzy glow is emitted through the various veiled windows from the opposite building.

Tuesday recalls Alfred Hitchcock’s 'Rear Window' in which Jimmy Stewart watches his neighbours from the window, or even Shizuka Yokomizo’s Stranger series (1998-2000) where she sent anonymous letters to residents of random ground floor apartments asking them to stand in front of their window. But unlike that murder mystery or social exchange, here the viewer becomes absorbed in a solitary, private narrative.

'Puddles in the City' (2014) is a series of five images documented across London, Paris and New York, each depicting a mime dressed as a city icon glowing out of the darkness in an empty street. The landscape can only be placed into context by means of the surrounding architecture and the lettering in the road signage. Together, the images represent the cliché-like postcards a tourist might hunt down like trophies to prove that he has “been there”. The artist is concerned with the role of the individual as a conscious or unconscious urban performer. These characters play a role in the city’s entertainment - but Choo has photographed them unaware and without an audience. She asks: “Are they still performing?”

Fiona Struengmann’s works comprise a selection from 'Articulated Silence' (2010-2013) – a series shot in Antarctica, Canada (British Columbia) and England (Richmond). Her black-and-white photographs blur the line between photography and drawing; one could think the photographs are in fact drawings. These images -- are they real or imagined? -- draw viewers in, challenging and enticing the eye to explore interplay of the visible and the invisible, of darkness and light, of suggestion and crisp, clear lines. The sensation is reminiscent of Denis Cosgrove, who affirmed that “landscape is not merely the world we see, it is a construction, a composition of that world…it is a way of seeing the world” . Struengmann’s aesthetic approach to landscape is concerned with what is seen and what is perceived, felt, projected. Often covered by snow, fog, wind or clouds, the compositions trigger self-reflection.

In 'Antartica IceShelf', Struengmann humanizes the immensity of the icebergs by offering us an oblique view of them. In fact, we see no icebergs but fragments of terra firma -- close-ups that convey silence and a sense of wonder. The viewer is bought into this remote, inaccessible place. The photograph’s size (70cm x 100cm) contributes to an awareness of its intimacy and the image becomes the viewer’s space.

'Trees in Wind' and 'Shadows' depict aerial views in British Columbia, Canada and capture the interplay of both wind and snow, absorbing the space and seemingly diminishing the landscape’s immensity. The effect achieved is both captivating and calming. 'White Mountain' (98cm x 150cm) appears as a pyramid, as a wedge-shaped tower or even as a dazzling dune.

Taken in Richmond Park, U.K., 'Deers' conveys the essence of a typical English countryside. The low horizon and expansive sky underscore the predominance of a void that inspires contemplation. The deer half emerge from the distant fog which obscures the periphery of the viewer’s vision. An introspective atmosphere is evoked by the muted elements.

Whether in the depths of the remote outdoors or the more accessible Richmond, Struengmann’s photographs convey an experiential quality. The articulated silence is meditative and empathetic. She is currently working on a series of Antarctica map drawings (not included in this exhibition) in pointillist style that further encourage deep contemplation. Taken together, the photographs offer a meditation in line with the patient and painstaking process of creating these drawings.