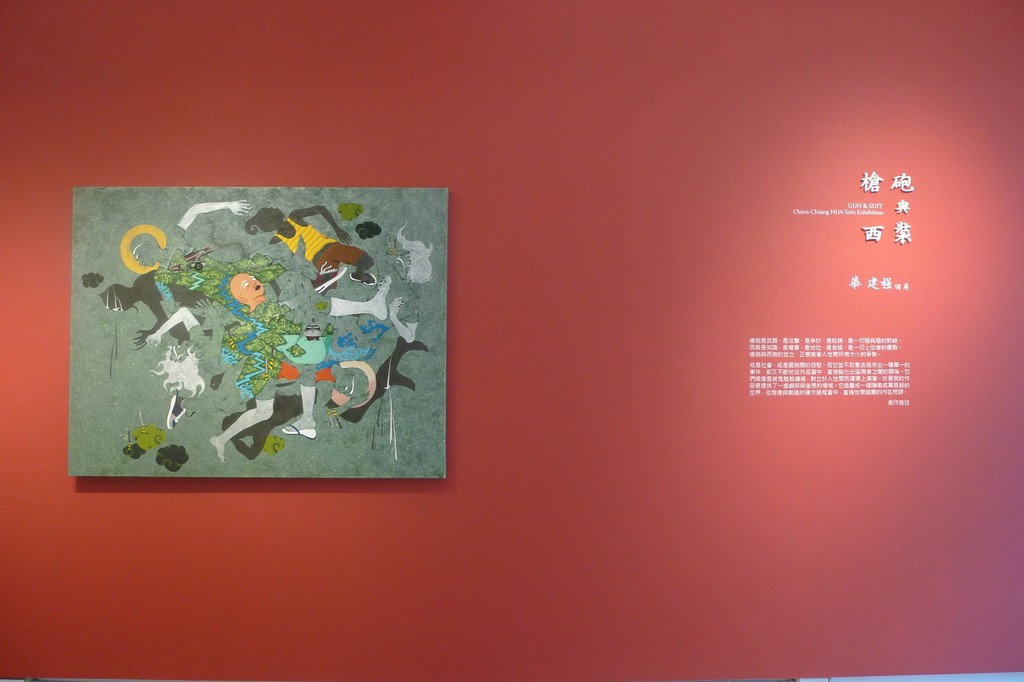 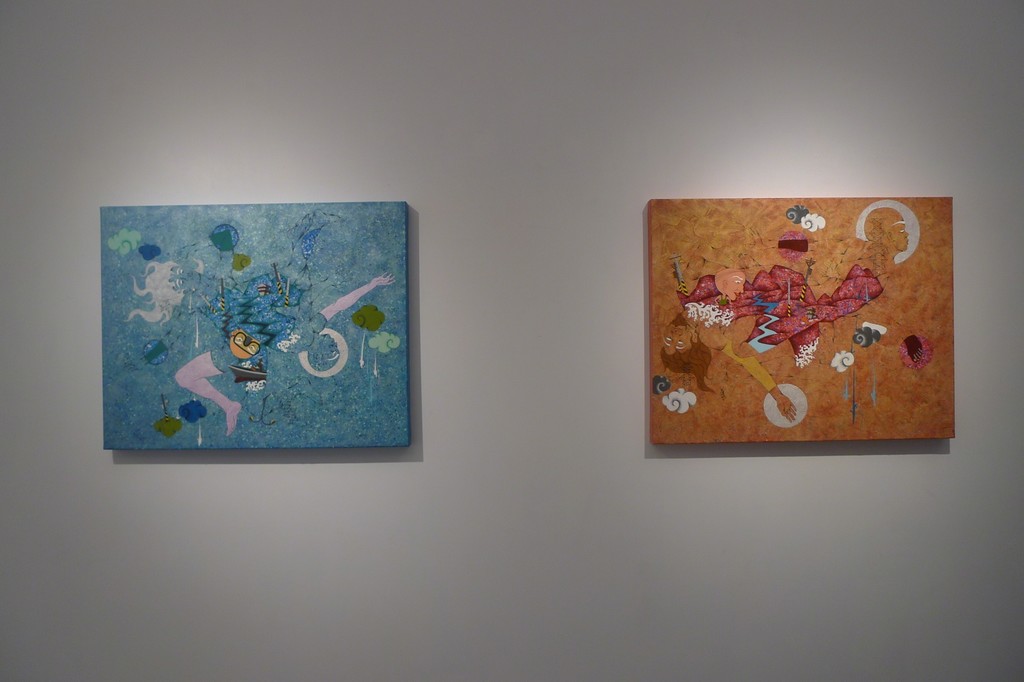 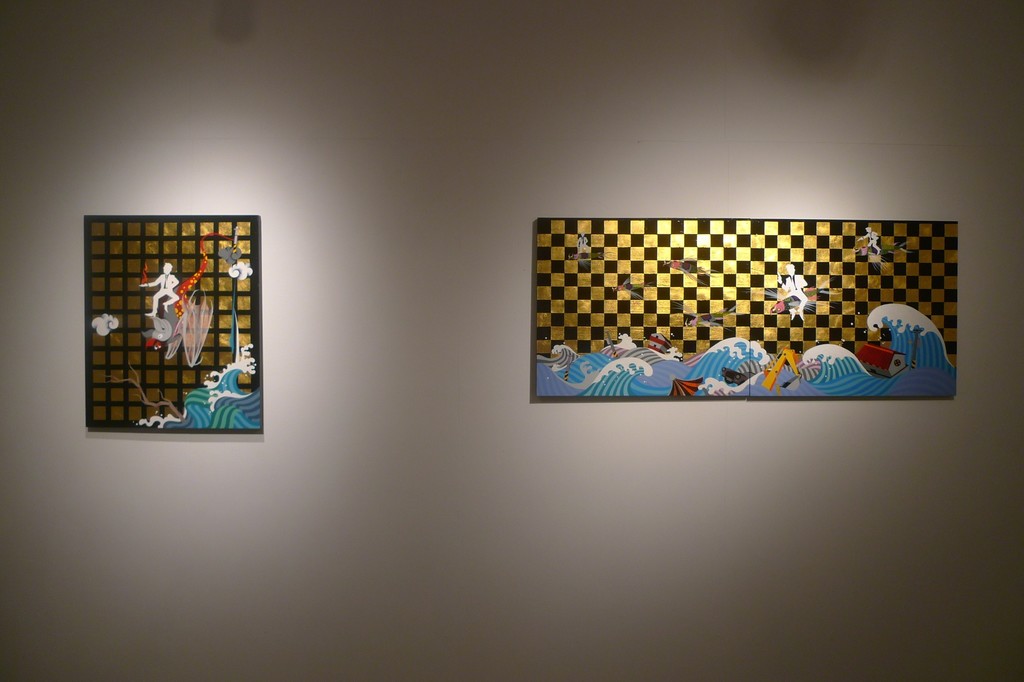 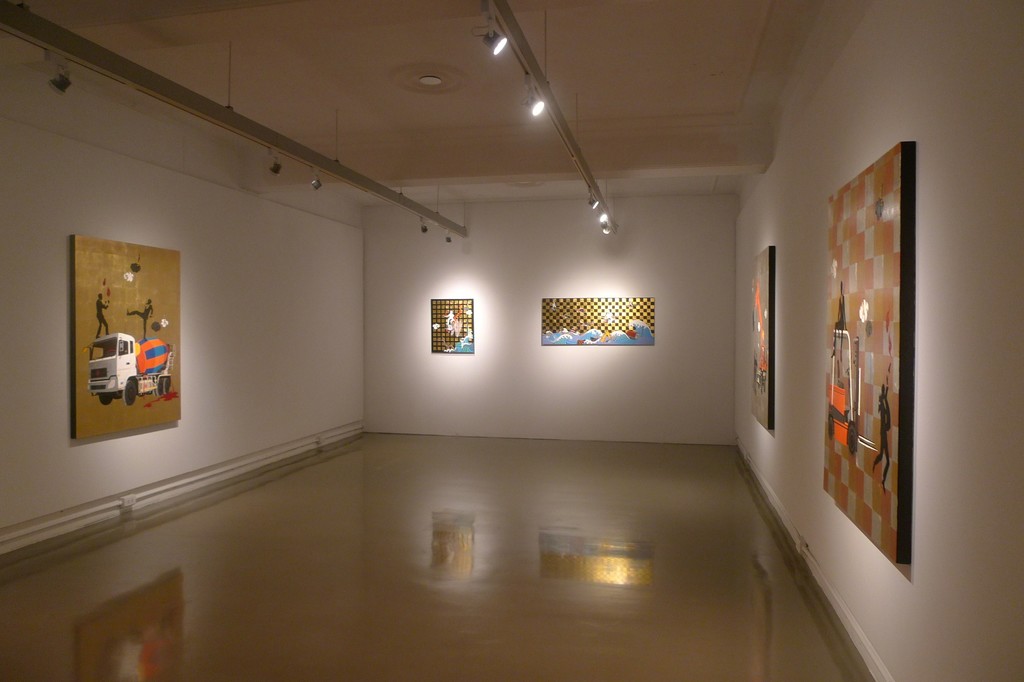 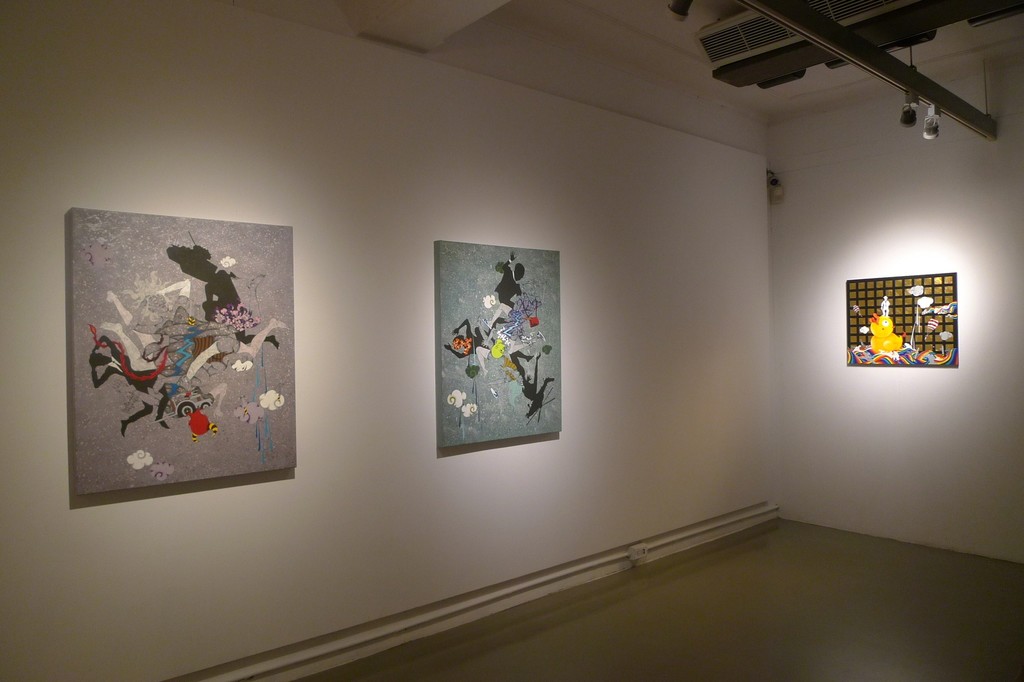 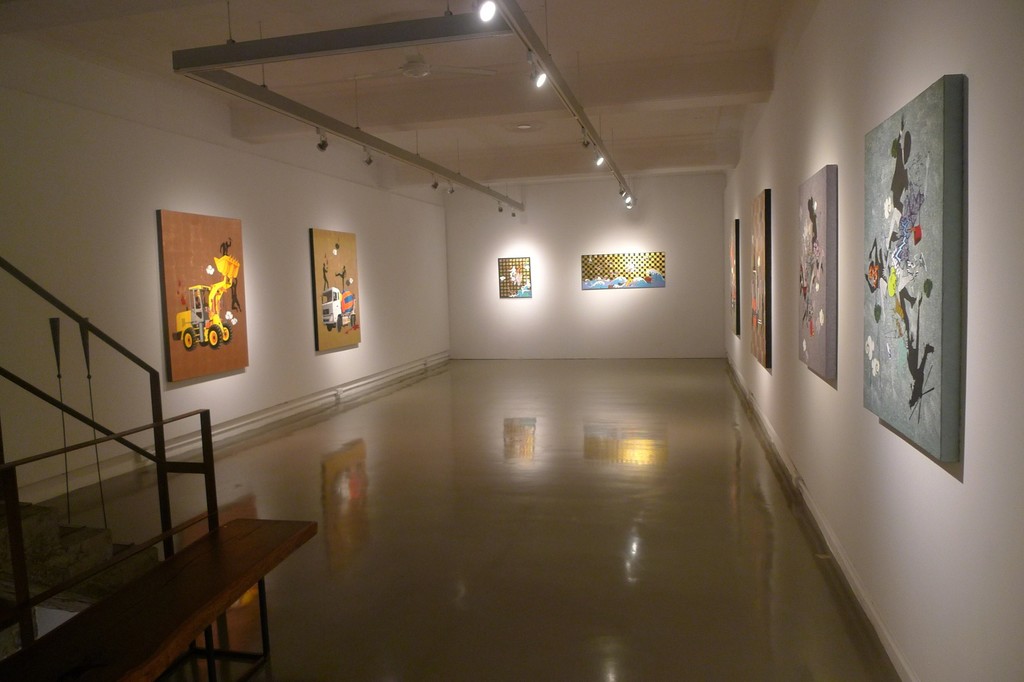 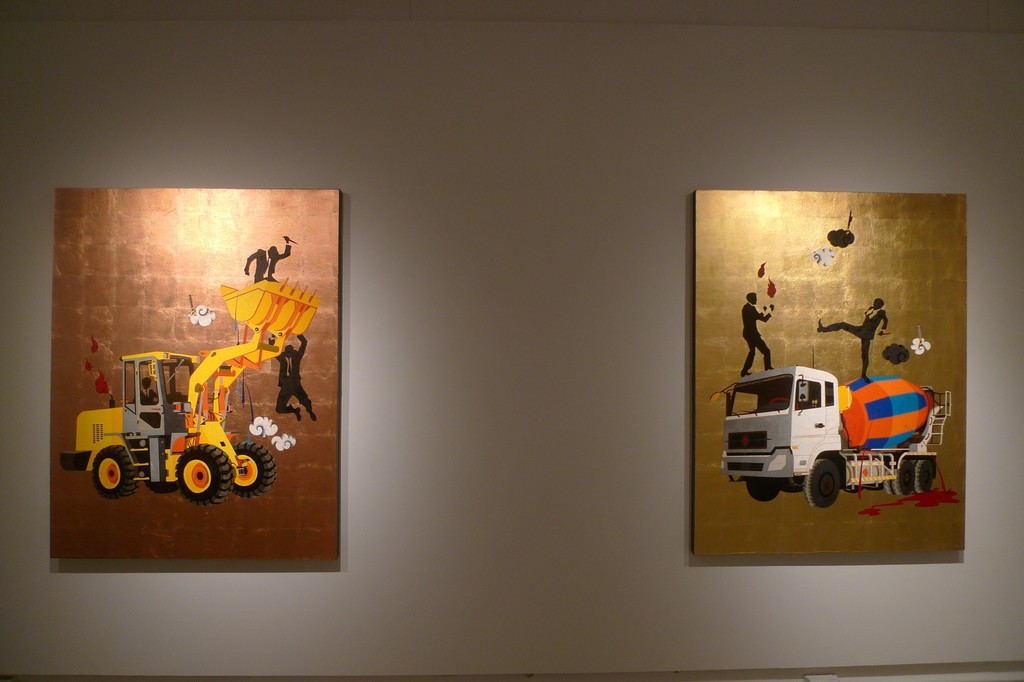 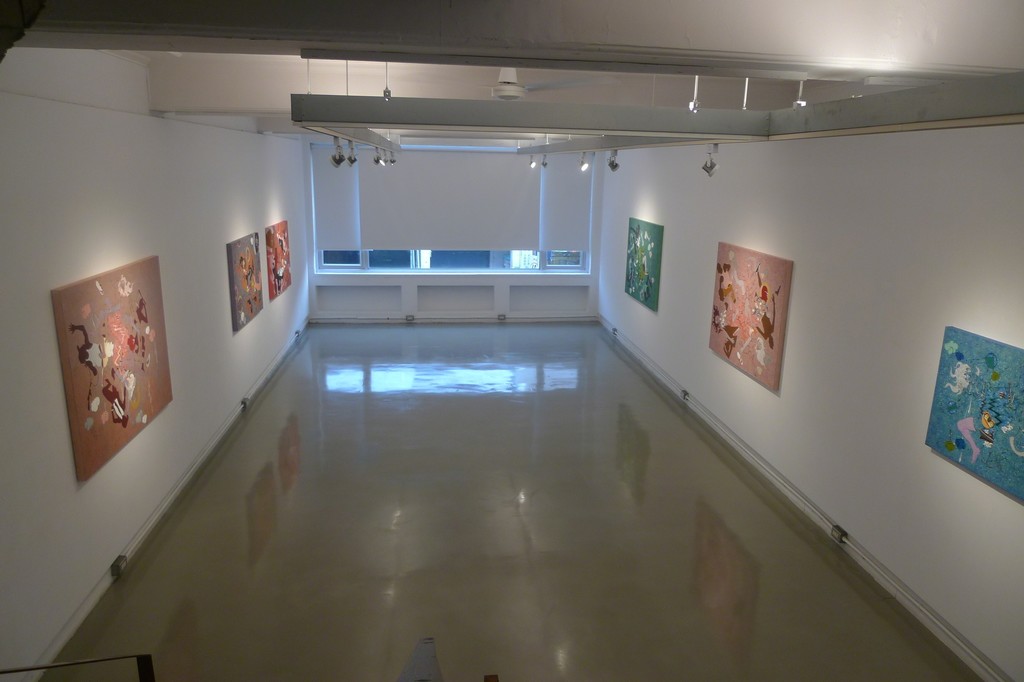 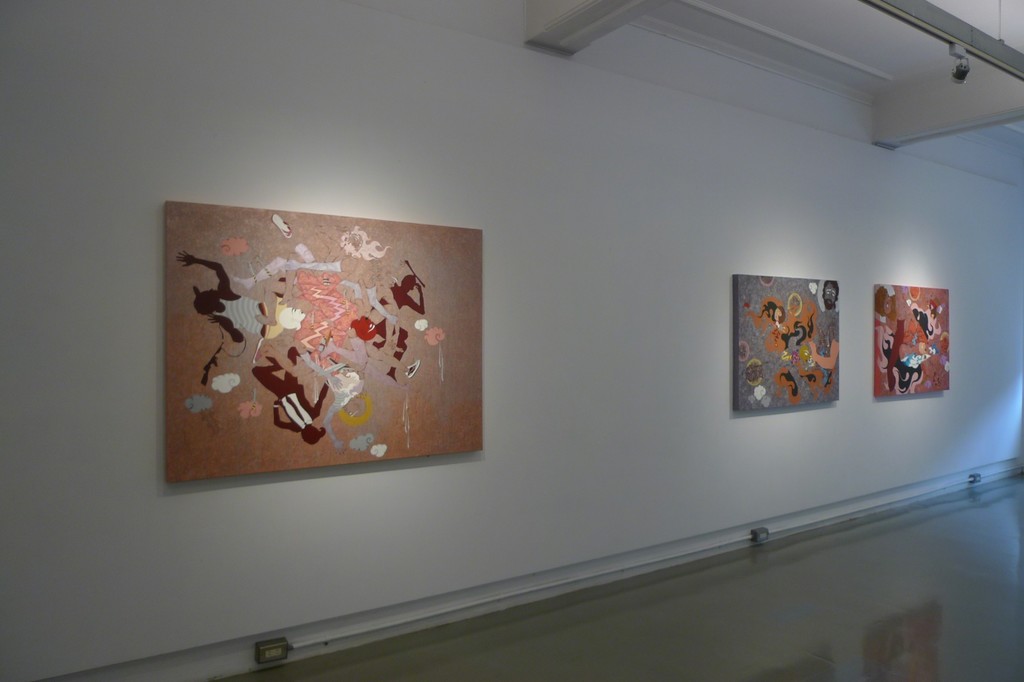 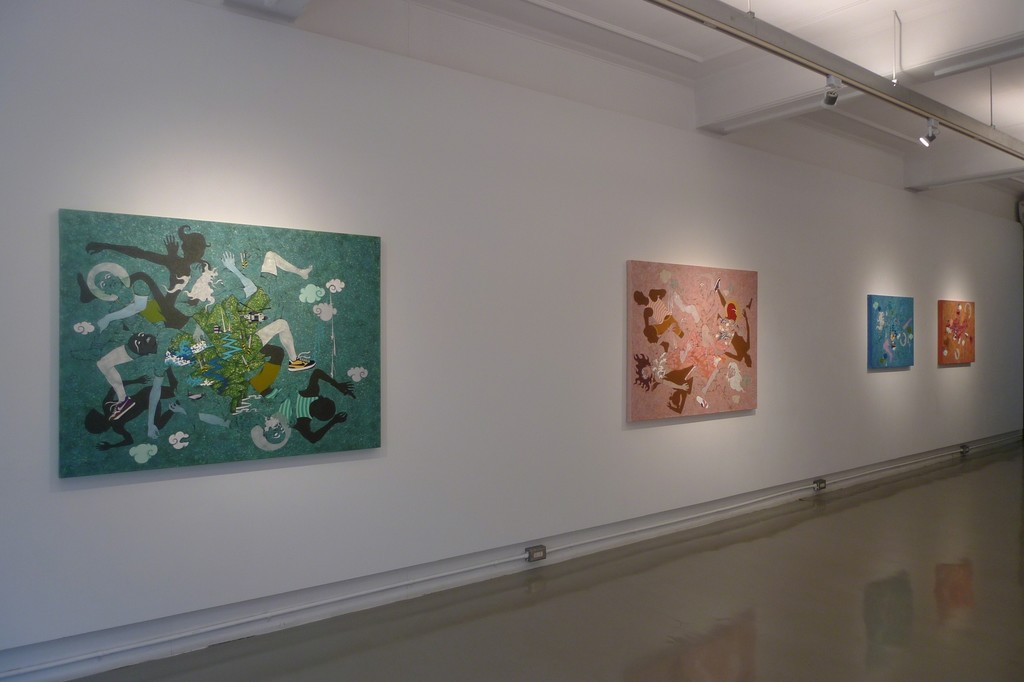 After a gap of three years, the anticipated solo exhibition of HUA Chien-Chinag will be presented at AKI Gallery at the end of 2013. Except for frequently joining exhibitions in worldwide musems and recidency in several nations in europe and America, HUA’s symbolic oriantal gouache painting has become his impressive personal indication which is praised by

international curators and museums. This December the ‘’Gun & Suit” solo exhibition transforms the elderly which has been existing for ten years into men in suits, annotating social issues by exercising contemporary gouache parable.

Alter from the traditional gouache themes such as flower-and-bird or landscape paintings; HUA conceives present social issues with his unique idiosyncrasy: an elder man as the main role humorously criticizes current events. Since Taipei Arts Award in 2004 and 2007 solo exhibition “New Blossoms of the Divine” at Taipei Fine Arts Museum, HUA started to make himself conspicuous. After Paris residency in 2009, HUA released more energy in his solo exhibition “Reality in Wonderland” in 2010. Successfully he reached a new height in his artistic level and unceasingly receives international exhibition invitations till now. The whole new solo exhibition “Gun & Suit” will show the complete six series which demonstrate the fighting, struggling and competition in daily life.

Gun & Suit: The Manipulation of Military and Power
“Gun is a weapon and attack; suit is knowledge and bigwigs.” In the show, guns and suits are the attribute to all the disputes in this world. The man wear suits are the influential officials. The irony occurs when they look lively and delightful in brisk postures but contradictorily hold all kinds of minacious weapons. HUA creates a perfect scenario which each character has his own position and emotion - brandishing or riding on the winds and breaking through the waves – implying moral absurdities.

Terroristic Machines come from Incisive Intent series
One of the brand-new series「Incisive Intent」implicate that machines are invented to make our life easier like a helper. Human use them to exploit forests and create civilization. However, the neutral role becomes evil substitute under control of human. With a bit taste of graffiti, Incisive Intent series display abundant interesting silhouette, overthrowing your conventional impression.

The conflicts are due to ubiquitous Small circle series
Another series called「Small circle」, HUA treats human as social animal who can’t resist to be in a group. We watch others form a group and then we become part of the other group. For consolidating the position, people seize by force or maintain a fort. This is the evidence of history evolution. HUA integrates art with the society not by accusation but implications of moral which keeps people pondering.

The highlight in the art community Gun & Suit -Solo exhibition of HUA Chien-Chiang will open on Dec. 14. The whole new announcement of recent works in these three years will simultaneously exhibited in Taichung ARTHIS FINE ART that audience in southern Taiwan can visit nearby. How edgy can traditional gouache presents? How close life and art can be? Every oppression detail of beautiful contradiction can be seen at AKI Gallery and ARTHIS FINE ART next month! We sincerely invite you to witness HUA Chien-Chiang’s mature gouache technique with modern style and insightful observation of the society. Come experience “HUA style” contemporary gouache works with us!