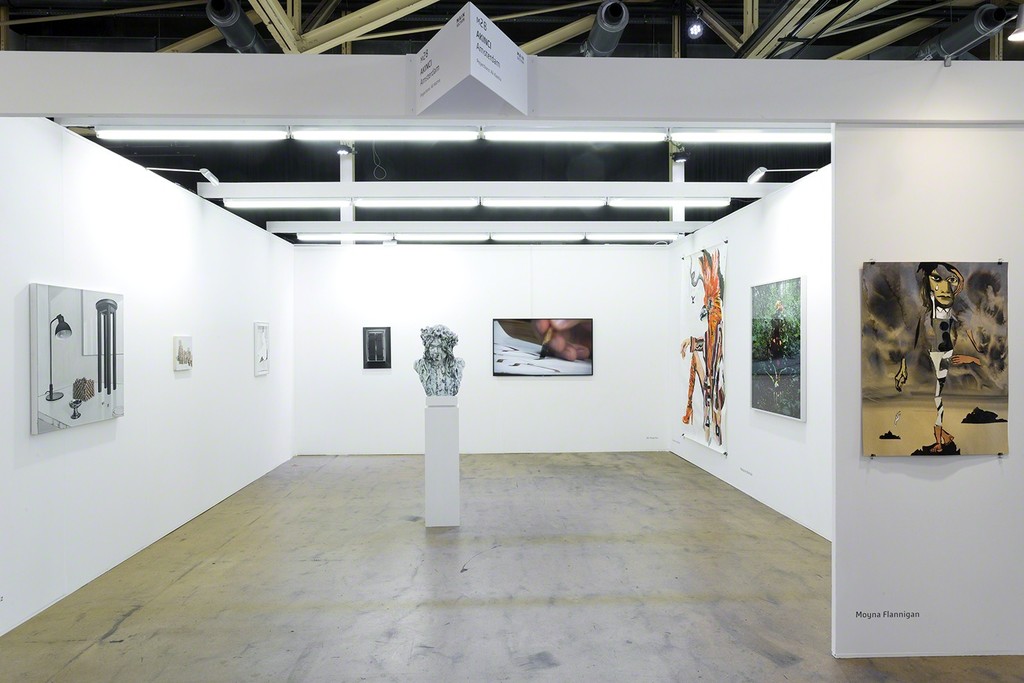 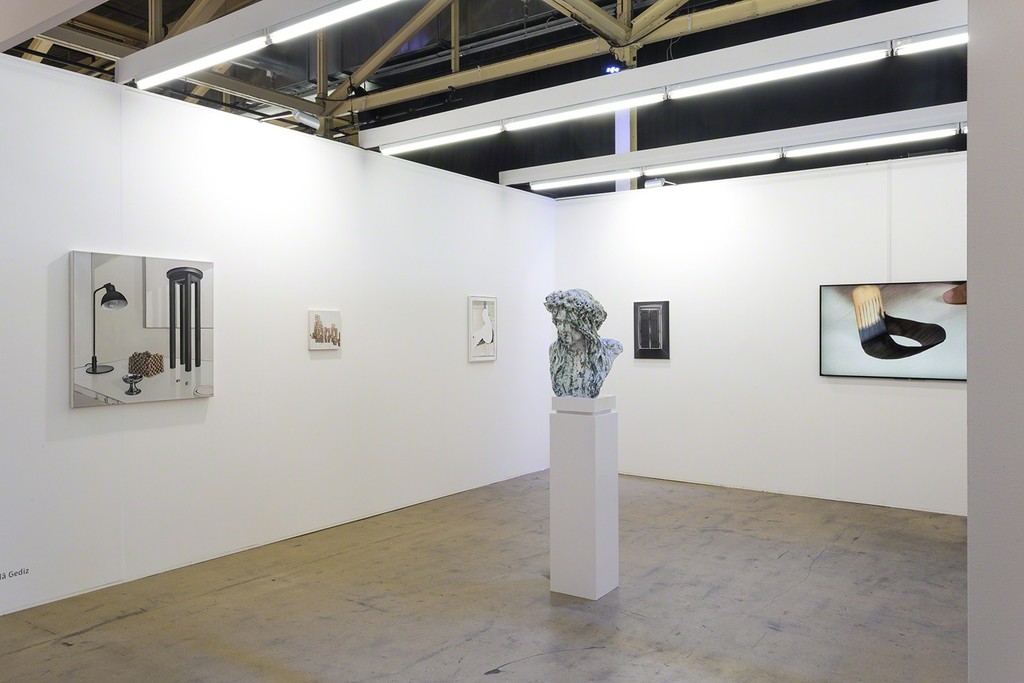 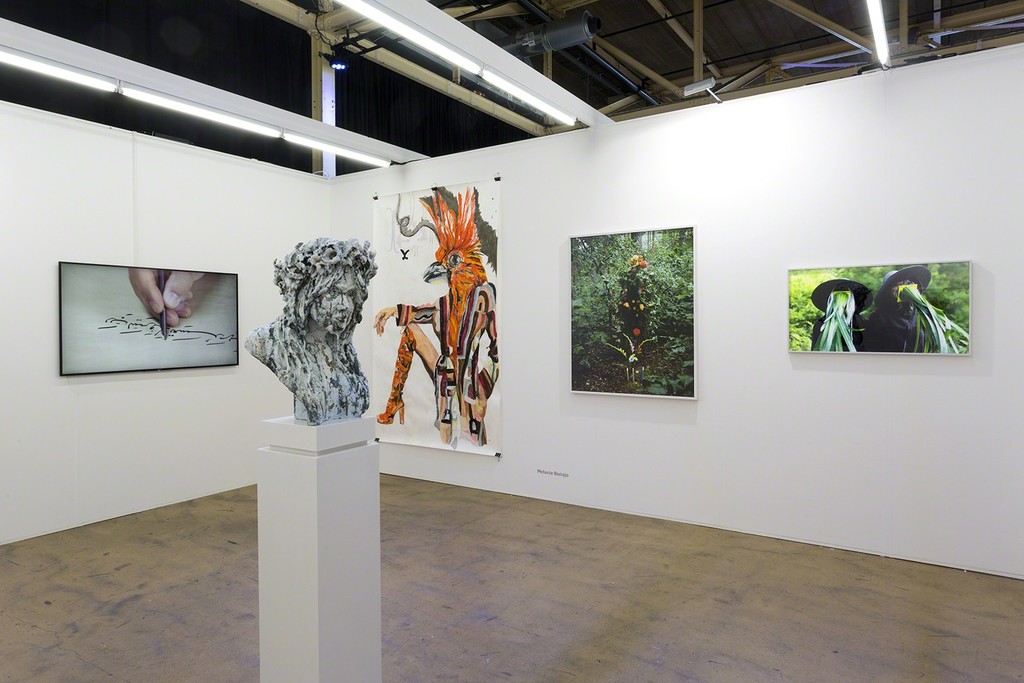 Moyna Flannigan's new collages feature her signature of female figures in a stripped and barren landscape. As in her paintings with stick-like limbs provokingly splayed—making them seem at once both brittle and powerful—these figures command their territory. Their posture, sometimes subtly comic, is sculptural like a Giacometti figurine. Always, Flannigan’s female characters are stripped of their social context and become elemental beings in this strangely familiar no-man’s land. They exhibit themselves but unlikely her paintings, in the collages their limbs seem to be ruptured and put together as though they were looking for new context and meaning.

Leylâ Gediz’ paintings presented at Art Rotterdam seem to echo each other with slight shifts of focus and points of view. In her first solo exhibition, Parabéns at AKINCI (2017/18), Gediz guided the viewer through a world of subtle changes and feelings between farewell and expectation of something new and unknown. Gediz invites the viewer to join into moments of joy and hope that are caught within the casual and everyday objects Gediz has placed into her paintings. The works announce a familiar place on the threshold of uncertainty and change.

Leylâ Gediz was born in Istanbul in 1974. Gediz occupies an important place in the field of visual arts in Turkey and abroad. After attending the Staedelschule für Bildende Künste in Frankfurt and the Chelsea College of Art and Design in London, she completed her MA in Visual Arts at Goldsmiths College (London) and a BA in Fine Art at The Slade School of Fine Art, UCL (London). She has been widely exhibited and her work is included in several prestigious private and public collections. Three of her works previously shown during Serpilen at The Pill are being presently exhibited in the Collection presentation at the Van Abbemuseum Eindhoven. Leylâ Gediz moved in 2017 from Istanbul to Lisbon.

Anne Wenzel works on a strong and distinctive oeuvre of monumental ceramic sculptures and installations that are often placed in an accurately orchestrated setting. Wenzel takes an apparent subversive position between tradition and modernity. Departing from historical iconography, she tackles contemporary and often political themes by using a consciously chosen traditional medium: clay. At Art Rotterdam AKINCI is proud to present a sculpture of a female bust from Wenzel’s newest series.

Ali Kazma is a video artist whose work documents human activity in labour, raising questions about the meaning of economy, production, and social organization. His films capture the precise and particular specializations of a range of professions, performed by people who have developed a fascinating fluency in their task. With sheer and sincere imagery he explores the discourses, techniques and management tactics developed for the body today, focusing on the interventions and strategies that both release the body from its own restrictions and restrict it in order to control it. Without being documentaries, or naturalistic reports, Ali Kazma’s films involve a violent relation to reality. At Art Rotterdam we are proud to present his film ‘Tattoo’ in Projections and his film ‘Calligrapy’ in our booth.

Born in 1971, Istanbul, Ali Kazma completed his undergraduate studies in the United States in 1993. After briefly studying photography in London, he returned to the US to study film in 1995. He received his MA from The New School University in New York City where he worked as a teaching assistant. Ali Kazma was granted the 2001 UNESCO Award for the Promotion of the Arts and received the 2010 Nam June Paik Award for his ‘Obstructions’ series, which he has been working on since 2005. Kazma’s video works question and explore the different rhythms and states of human existence and its relationship to contemporary conditions. He has exhibited his works at the Istanbul Biennial (2001, 2007, 2011), Tokyo Opera City (2001), Platform Garanti Istanbul (2004), Istanbul Modern (2004), 9th Havana Biennial (2006), San Fransisco Art Institute (2006), Lyon Biennial (2007), and Venice Biennale, Pavilion of Turkey (2013), Jeu de Paume, Paris (solo 2017/18). Kazma has been living in Istanbul since 2000.

Charlotte Schleiffert’s large drawings have a strong visual impact. In her recent drawings, Schleiffert comments on richly ornamented costumes. Madame Delaunay Schleiffert presents at Art Rotterdam depicts the pin-up-like model in a costume that the viewer could easily associate with a ‘modernist’ design from the hand of Sonya Delaunay. Schleiffert’s drawings are thickly layered and daubed with pastels and acrylics. She often comments on images that she encounters in the media. Sometimes her figures take on an androgynous form. Women presenting themselves provocatively to the onlooker have characteristics reminiscent of pin-ups or models. At times they have a hybrid form: then the pin-up or extravagantly dressed up woman carries a bird’s head or a dinosaur scull.

In her work, Melanie Bonajo examines the paradoxes inherent to ideas of comfort with a strong sense for community, equality, and body-politics. Through her videos, performances, photographs and installations, she studies subjects related to how technological advances and commodity-based pleasures increase feelings of alienation, removing a sense of belonging in an individual. Captivated by concepts of the divine, Bonajo explores the spiritual emptiness of her generation, examines peoples’ shifting relationship with nature and tries to understand existential questions by reflecting on our domestic situation, ideas around classification, concepts of home, gender and attitudes towards value.

Melanie Bonajo (Heerlen, NL, 1978) studied at the Gerrit Rietveld Academy and completed residencies at the Rijksakademie voor Beeldende Kunst in Amsterdam (2009-10) and at ISCP in New York (2014). Her film Progress vs. Regress, commissioned by Hacking Habitat Utrecht, is the first part of her recent trilogy. For the second part of this trilogy called Progress vs. Sunsets – Re-formulating the Nature Documentary, Melanie Bonajo has been nominated for Prix de Rome 2017.. Selection of recent exhibitions: Schunck, Heerlen (2015), Museum Arnhem (2015), EYE Film Museum, Amsterdam (2016). Melanie Bonajo presented her Night Soil trilogy in a solo show at FOAM om 2016 Amsterdam. Bonajo had a solo exhibition at Frankfurter Kunstverein in 2017. Upcoming: Haus der Kunst Munich, Germany and a solo exhibition at Bonnefanten Museum in 2018. RIGHT NOW: The installation ‘Progress vs Sunsets’ can be viewed and experienced in the Prix de Rome presentation at the KUNSTHAL Rotterdam.