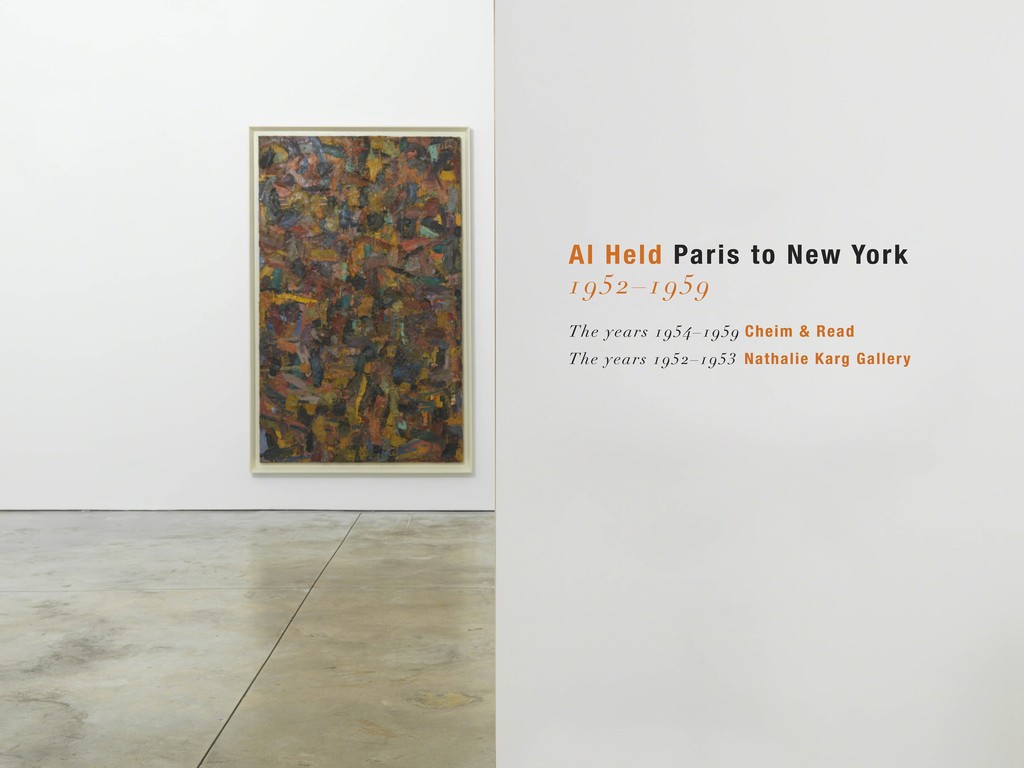 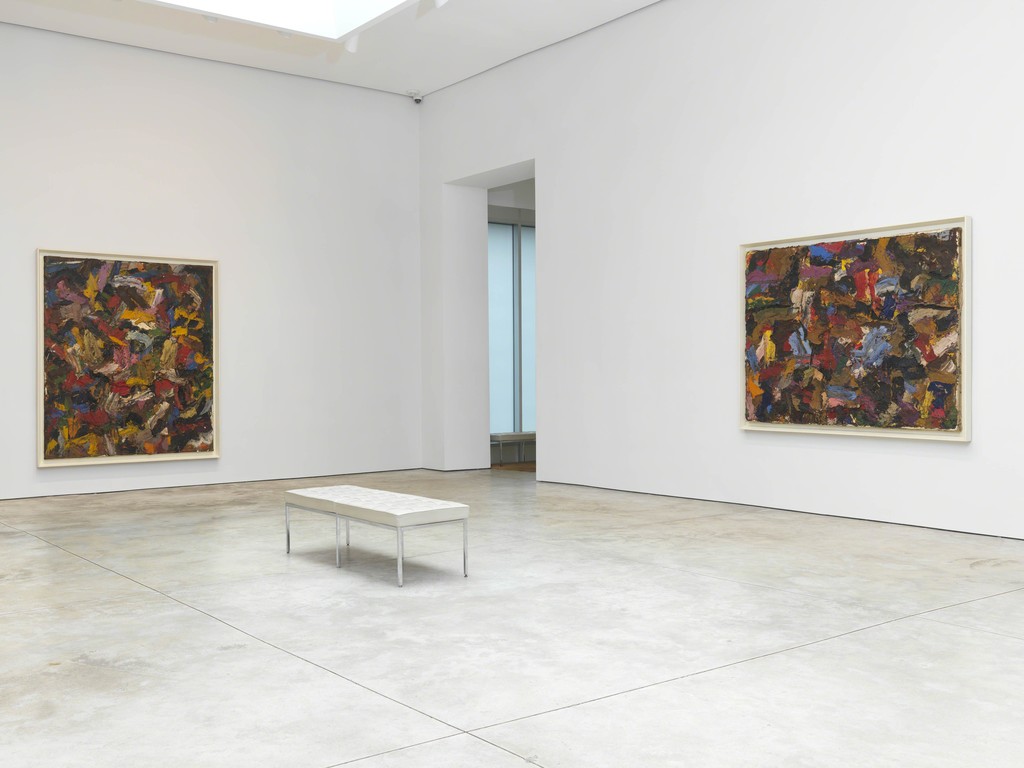 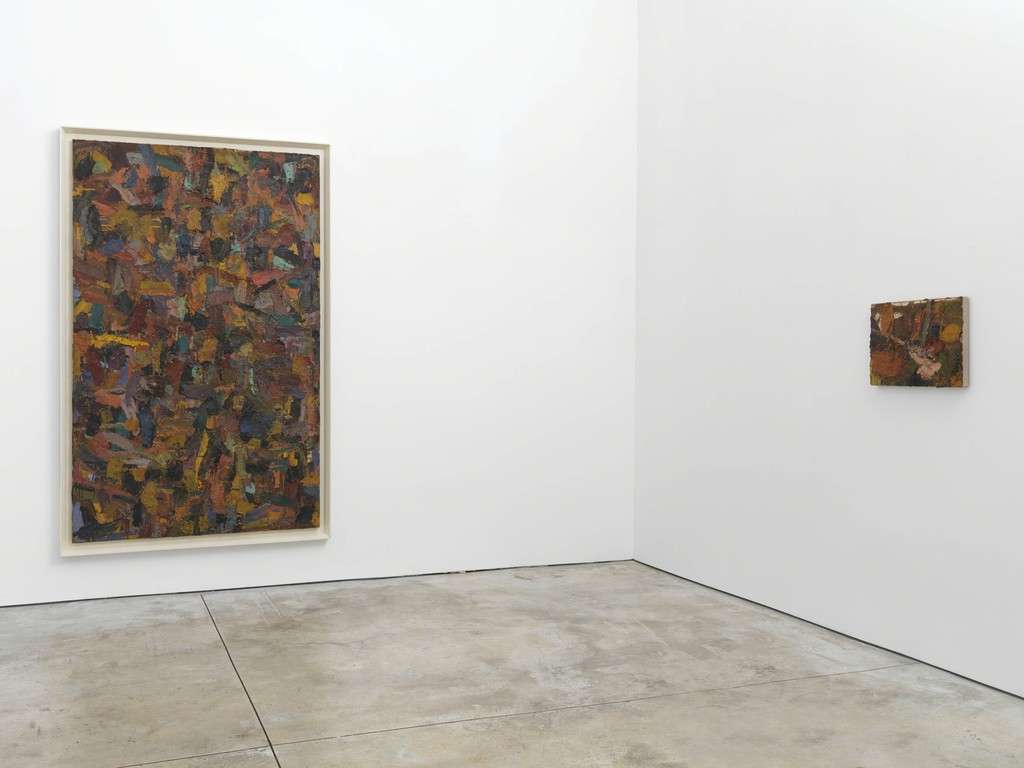 Al Held Paris to New York 1952–1959
Cheim & Read reception: Thursday, May 17 from 6 to 8 pm Exhibition continues through July 6, 2018
Nathalie Karg Gallery reception: Friday, May 4 from 6 to 8 pm Exhibition on view May 2 to June 15, 2018
Cheim & Read and Nathalie Karg Gallery are pleased to present Al Held: Paris to New York, 1952−1959, an exhibition of experimental works in pigment and wax that anticipate the painter’s well-known, epic-scaled geometric abstractions. Following exhibitions devoted to the Alphabet Paintings (1961−1967); Armatures (1953−1954); and Black and White Paintings (1967−1969), the current show is the gallery’s fourth examination of a distinct body of work within Held’s oeuvre. In these paintings, Held sought to fuse the improvisational, expressive freedom of Jackson Pollock with the order and geometry of Piet Mondrian; his goal, as he put it, was “to give the gesture structure.”
This large survey of 27 works will be presented across two venues, with the Nathalie Karg Gallery
featuring paintings made in Paris in 1952−53. Cheim & Read’s exhibition covers the years 1954 to 1959, after the artist returned to New York and moved into a studio on East Broadway.The exhibitions will run at Karg from May 2
to June 15, and at Cheim & Read from May 17 to July 6.
The Paris Paintings at Nathalie Karg are richly dark works with ripples of white, blue, green, rust, and red running horizontally across their heavily worked surfaces; one exception — a mosaic-like patchwork of earth tones, dark greens, and reds from 1953 — provides a bridge to Held’s approach after he returned to NewYork.As the debut works of a major American artist, Held’s sensual, mysterious, and dynamic Parisian nocturnes are emblematic of the restlessness and audacity that would become hallmarks of his career.
The works at Cheim & Read belong to a series known as the Pigment Paintings, so named because they were made with paint that Held mixed from 100-pound sacks of pigment discarded by the Museum of Modern Art, where he was working as a custodian. In these monumental canvases, some of which measure as much as nine feet in width, Held heightened the smoldering intensity of the raw pigment by thickening the paint with wax and other extenders, then applying it with a trowel to create a dense and visceral surface packed with slabs, smears, swipes, and gashes.
As Matthew Israel writes in the catalogue accompanying the exhibition,“in a moment where abstract painting has definitely returned to prominence — Held’s 1950s paintings seem like they could have been made by a current young abstract painter. [...] Broadly this confirms (yet again) that abstract painting remains a vital artistic language.”
Al Held was born in Brooklyn in 1928. After dropping out of high school, he joined the Navy and served from 1945 to 1947.The following year, he attended the Art Students League in New York, and between 1951 and 1953 he studied at the Académie de la Grande Chaumière in Paris under the GI Bill. His first solo show took place at the Galerie Huit in Paris in 1952. Upon returning to New York, he became one of the founding members of the cooperative Brata Gallery and participated in events at The Club, the meeting place of the Abstract Expressionists.
His first solo exhibition in New York was at the Poindexter Gallery in 1960; his work has been exhibited widely in the United States and Canada, Latin America, and Europe, including one-person shows at the Stedelijk Museum, Amsterdam; the San Francisco Museum of Art; the Corcoran Gallery of Art, Washington, DC; the Metropolitan Museum of Art, New York; and the Whitney Museum of American Art, New York. In 1963 he became a Visiting Professor at Yale University and taught there until 1980. He died in Camerata di Todi, Italy, in 2005 at the age of 76.
Held’s work is represented in dozens of public collections, including the Museum of Modern Art, Metropolitan Museum of Art, Solomon R. Guggenheim Museum, Brooklyn Museum, and Whitney Museum of American Art, all in New York; National Gallery of Art,Washington, DC;Art Institute of Chicago; San Francisco Museum of Modern Art; Detroit Institute of Arts; High Museum of Art, Atlanta; Museum of Fine Arts, Boston; Museum of Fine Arts, Houston;Tate Gallery, London; Kunsthaus, Zürich; Kunstmuseum, Basel; and Museum Kunstpalast, Düsseldorf.
The gallery will host a panel discussion on Wednesday May 30, 6-8 PM. Panelists include: David Cohen (moderator), Keltie Ferris, Matthew Israel and Nathalie Provosty.
Cheim & Read 547 West 25 Street, New York Nathalie Karg Gallery 291 Grand Street, New York