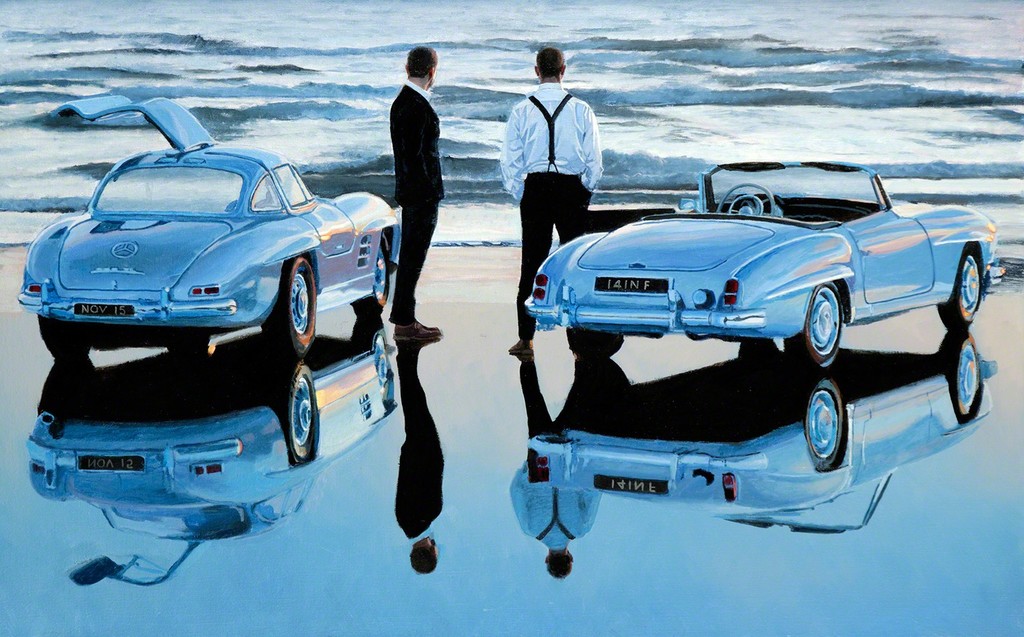 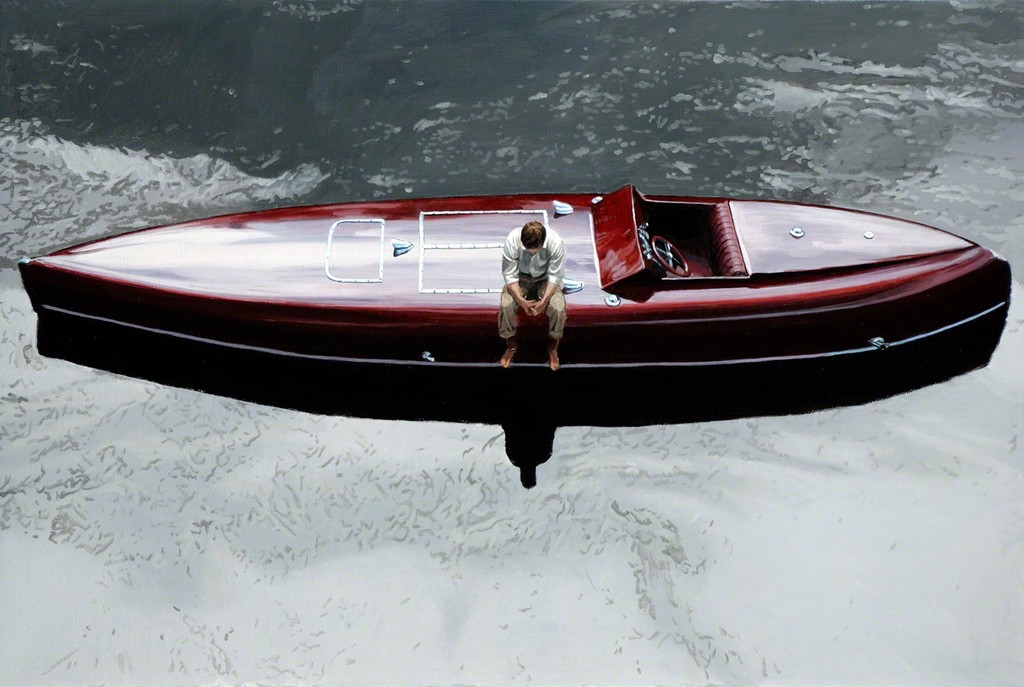 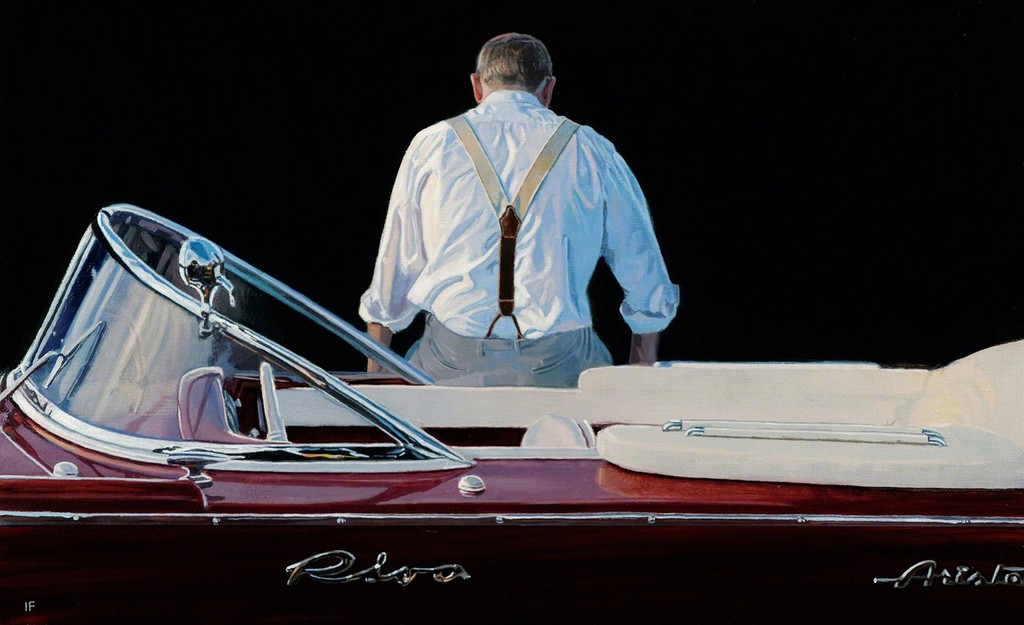 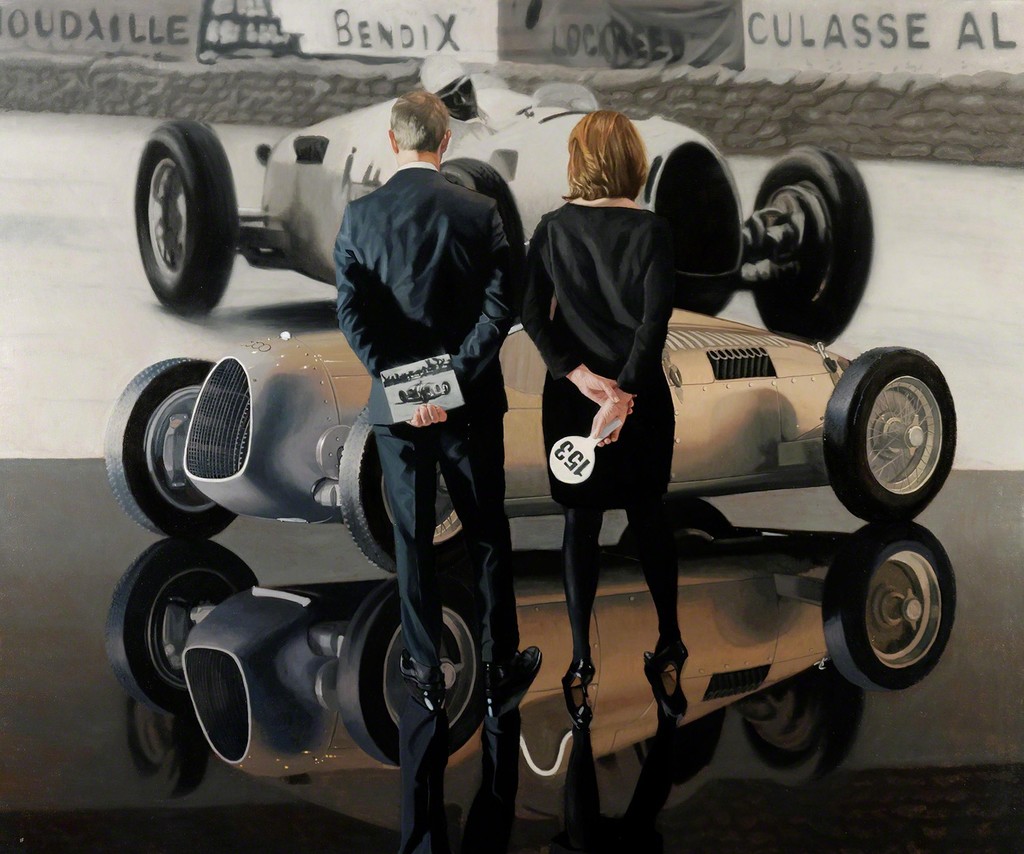 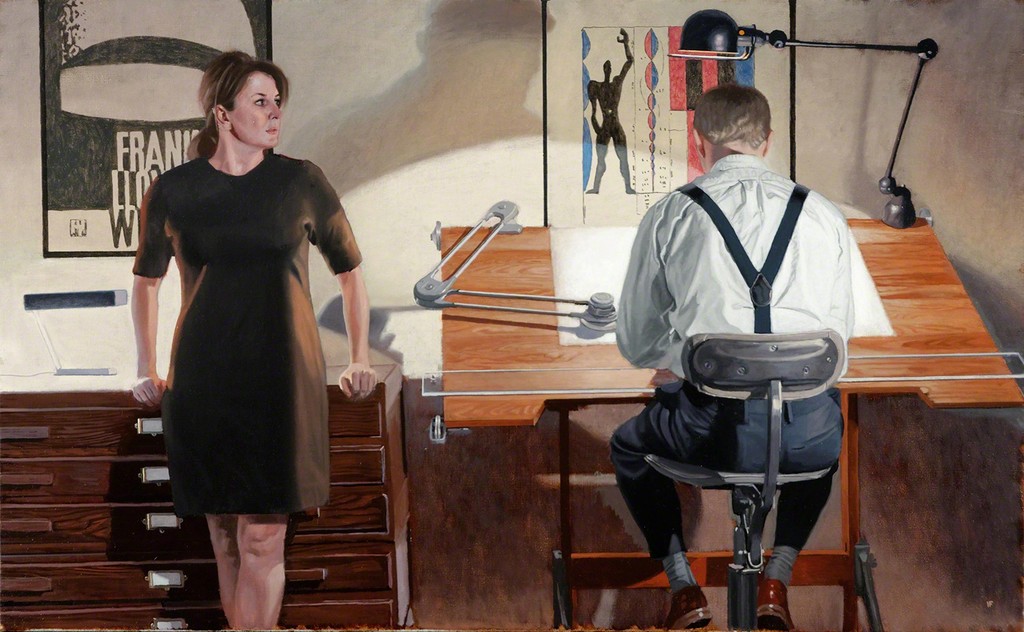 The main figure in this haunting series of meticulously realist paintings is male. He is nattily dressed and stands almost always, hands in pockets, with his back to us. Usually, but not invariably, his jacket is off, so that we can see he is wearing braces. Mostly he stands alone, contemplating a slightly hostile-seeming landscape or seascape. Sometimes, with a female companion, he seems to be at an auction preview, inspecting vintage racing cars. In one of these compositions, the car is an Auto-Union Type C, a Grand Prix single-seater from the years just before World War II, No car of this type is known to survive in absolutely original form.
In another painting, the car shown is a Mercedes 196, in which Juan Manuel Fangio won the 1954 German Grand Prix, and also the Swiss Grand Prix of the same year. In July 2013 the vehicle concerned was auctioned by Bonham’s at the Goodwood Festival of Speed and fetched a record price of £19.6 million, inclusive of commission and taxes, paid by a private buyer.
In other works, the same protagonist appears, again accompanied by a female assistant, at a draftsman’s table. In the background of one of these compositions there is a blow-up of the inner mechanism of an expensive watch. In the other, appropriately entitled Proportion, he is facing a diagram of stylised human proportions.
A striking characteristic of these paintings is the feeling of remoteness they convey. The main protagonist seems to exist in a sealed off universe of his own: one parallel with and even perhaps contiguous to the one we ourselves inhabit as spectators, but nevertheless quite separate from it. In the car auction paintings this situation is emphasised by the use of reflections – you see the car itself, as a precious object, and you see it twice again – as a reflection in a highly polished floor, and as a hugely enlarged photo on the wall behind the vehicle.
When one looks at these paintings, with their solitary hero figure, it is hard not to be reminded of certain kinds of spy-film – the long-running James Bond franchise in particular. Paradoxically, one thing they aren’t is directly contemporary. The automobiles that figure so prominently are enough to tell you that.
They refer to a dream world of solitary endeavour, where the individual turns his back on society and consciously takes responsibility for himself.
We are accustomed, in Old Master paintings, to depictions of heroic male beings – Hercules brandishing his club, St George on horseback, slaying the dragon. This series suggests that, in contemporary society, the hero is above all the entirely self- contained individual, willing, whatever the circumstances that confront him, to take responsibility for himself.
It adds an edge of irony that this figure is sometimes presented in association with what we think of as ‘rich boys’ toys’ – vintage automobiles in particular. Because they are indeed vintage (though always in pristine, showroom condition), they are symbolic of a certain level of taste. This hero figure knows his way around the slightly abstruse universe of classic cars.
Turning his back on us, as he almost invariably does in this series of paintings, the man we see invites us into a powerful world of dreams. He doesn’t have to acknowledge our presence in order to do so.
Edward Lucie-Smith Art Historian, Critic and Author