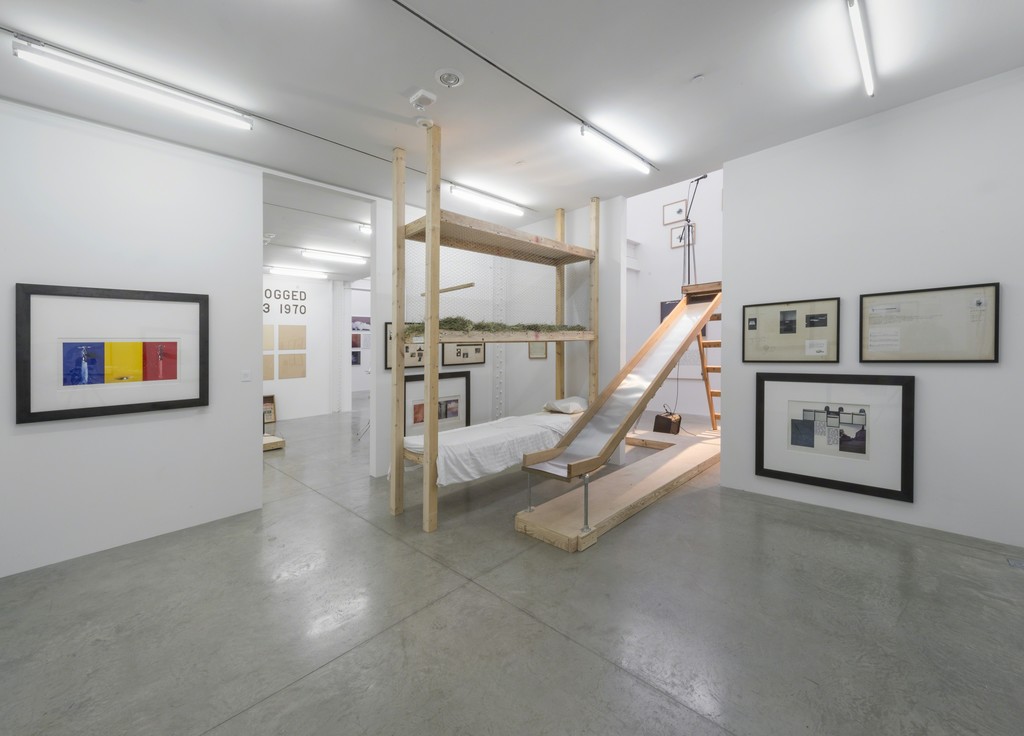 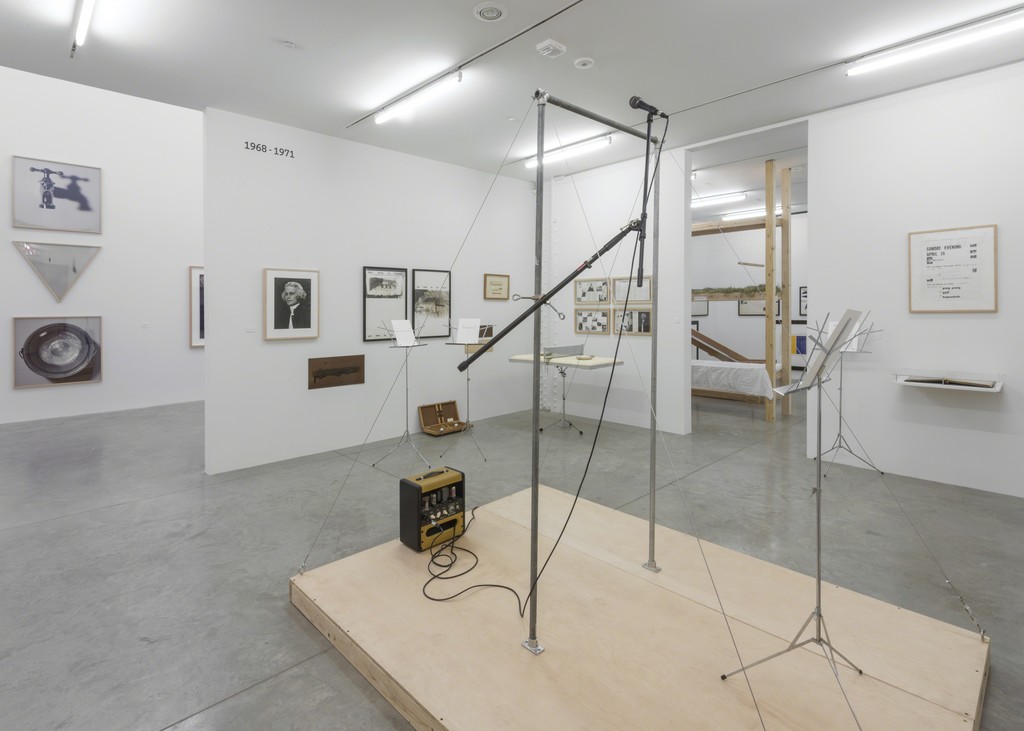 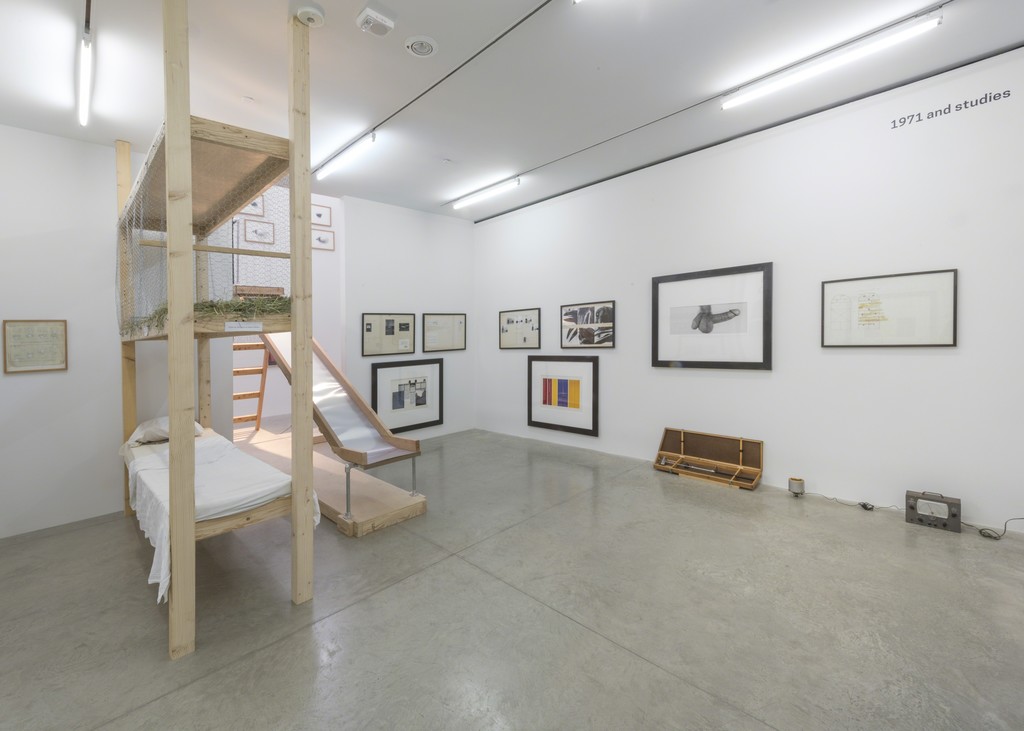 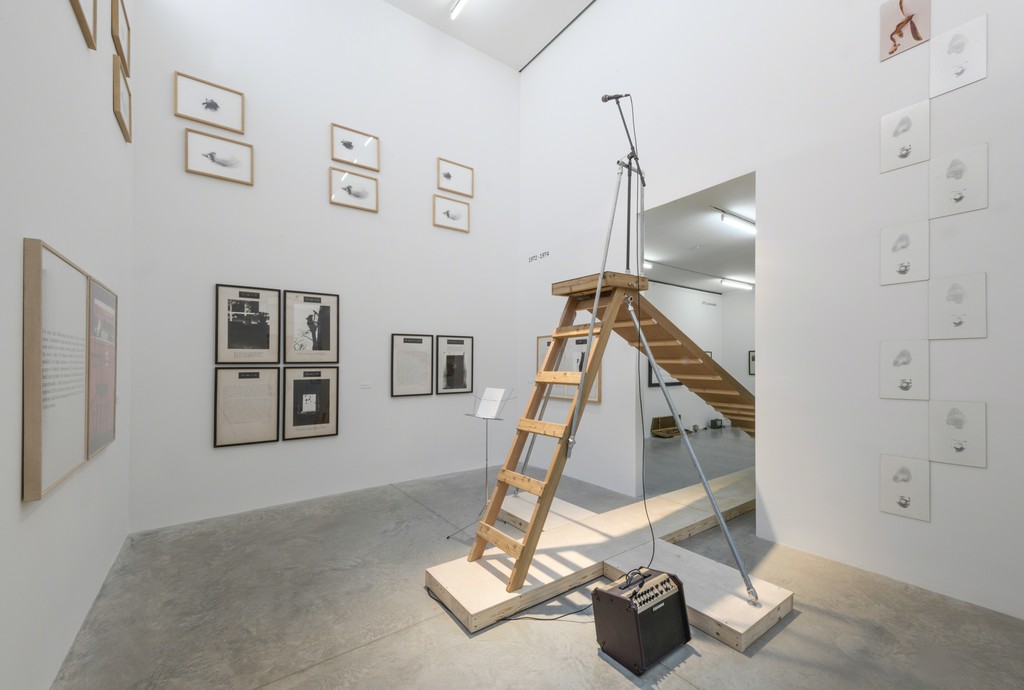 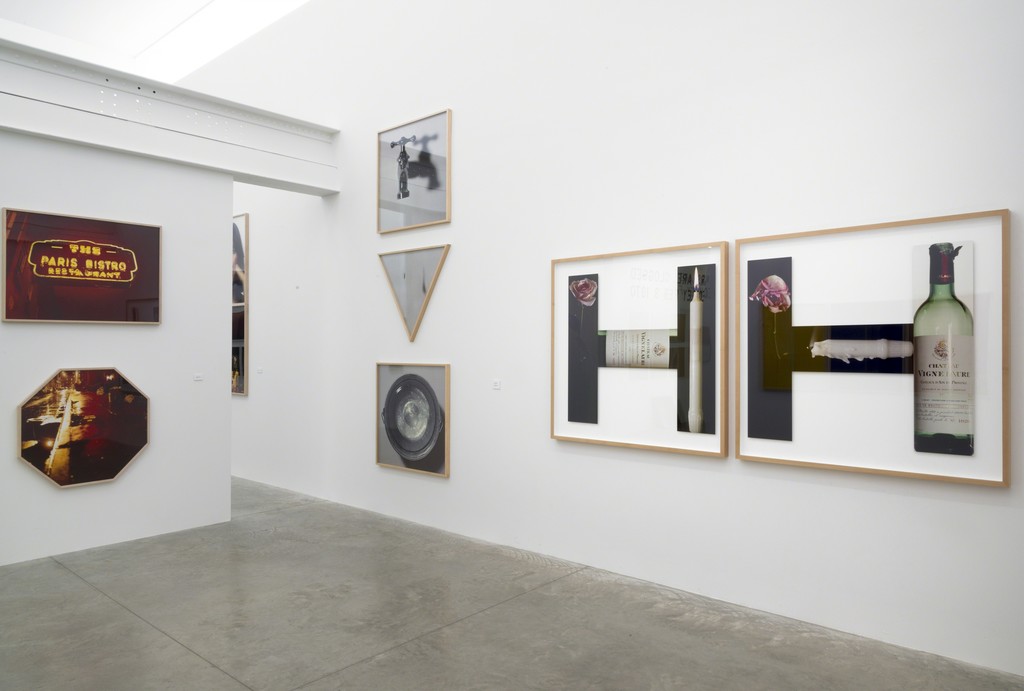 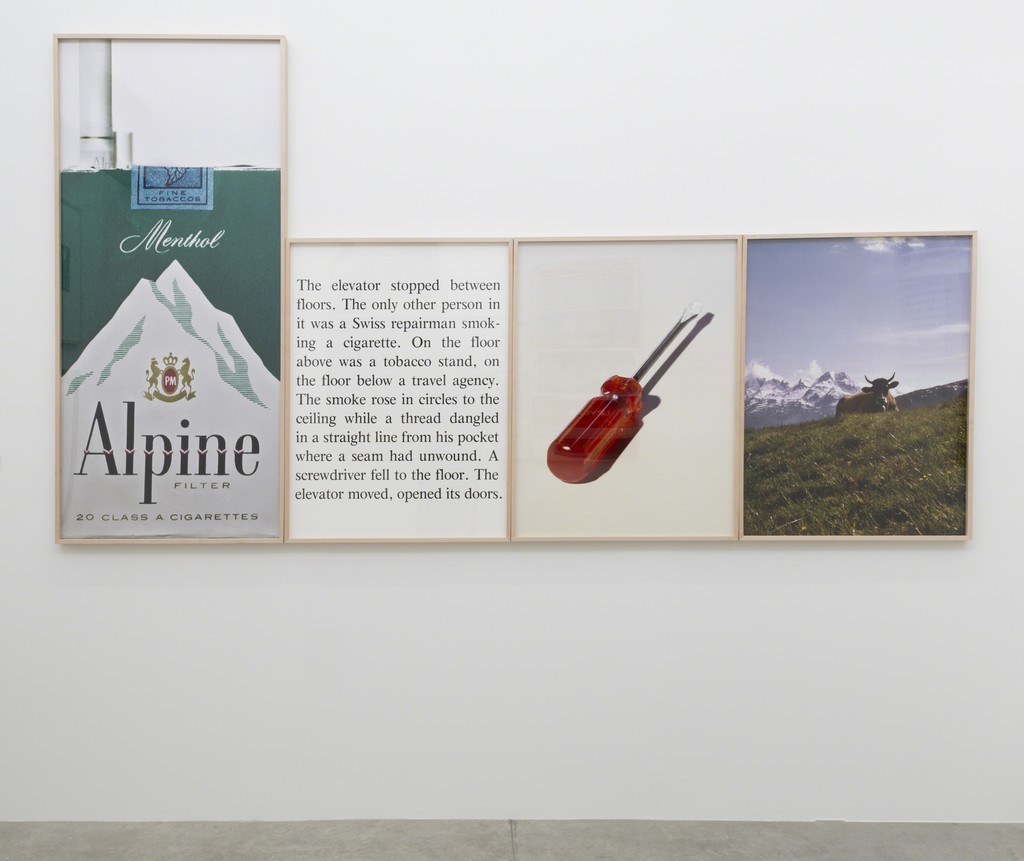 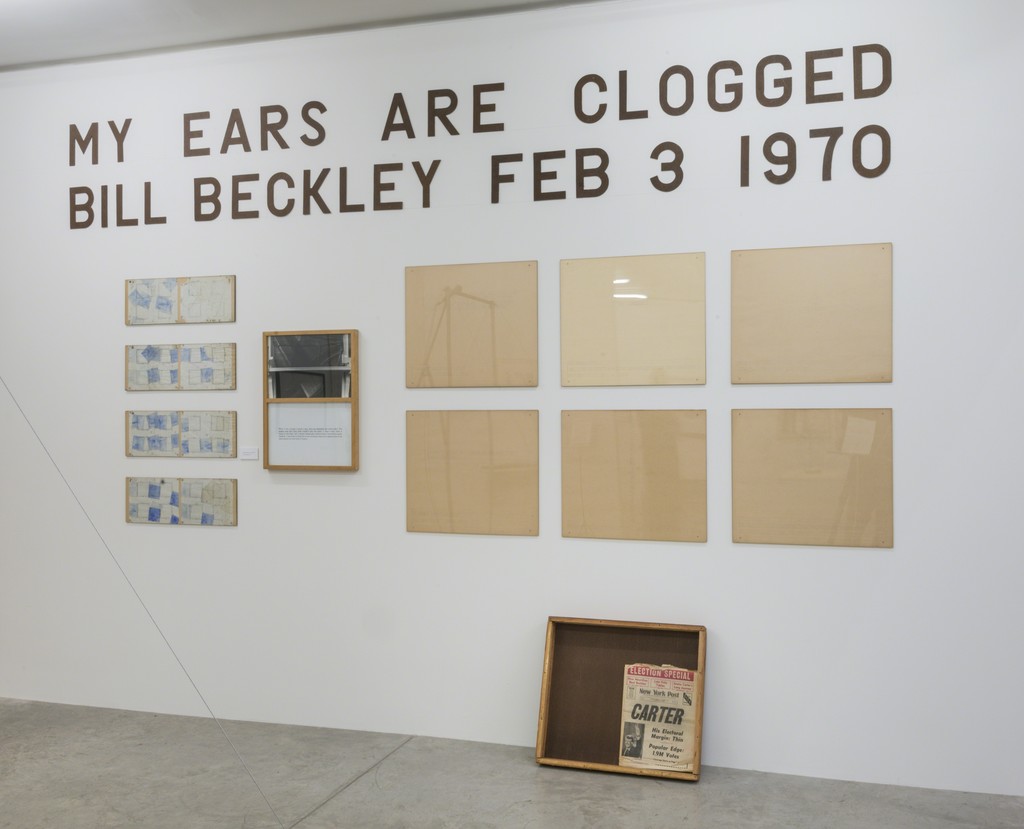 When I did the piece crossing the Delaware River on foot, dripping paint as I went, the current took me under, and I lost not only the paint but also the camera I was using to document the work. I realized then that all I had left was the story. – Bill Beckley

New York, NY – For its inaugural exhibition, Albertz Benda is pleased to present a solo show of early works by Bill Beckley from 1968-1978. A fundamental member of the ‘70s SoHo art scene, Beckley’s work provides a crucial glimpse into one of the key New York art movements of the 20th century. The Accidental Poet (The Avoidance of Everything) features Beckley’s conceptual narrative work of typed fictions and framed photographs, many of which are the last left of the edition and have been rarely on view since landmark exhibitions of the 1970s, including Documenta and the Venice Biennale. For this exhibition Beckley has opened his archives, shuttered since the 1970s, to unveil never before seen watercolors and rare, one-off archival materials. The Accidental Poet (The Avoidance of Everything) opens on September 10, 2015 and is on view through October 3, 2015.

Born in response to the minimalism of Robert Morris, Carl André, and Sol LeWitt (artists who made terse and immensely self-evident objects), Bill Beckley’s work represents the next generation and is comprised of many mediums full of shifting meanings. He is part of the highly influential ‘112 Greene Street’ group, made up of artists such as Vito Acconci, Dennis Oppenheim, Suzanne Harris, Gordon Matta-Clark, and Yvonne Rainer.

Bill Beckley’s work does not get to the point. Instead, it teases strange and beautiful poetry out of the mundane, orbiting around matters, sometimes nearing a center of gravity only visible to him, and other times soaring to another dimension. His subject matter draws from the parts of existence that cannot be pinned down.

Akin to synesthesia, where modes of sensory experiences are swapped, Beckley’s ideas are often described through an unexpected sense. This is evident in works like Song for a Chin-Up, performed in 1971 at Holly Solomon loft (98 Greene Street), where the motion of a chin-up was defined through notes sung gradually higher in scale, then swiftly down key. The song will be re-performed, for the first time since the ‘70s, throughout the run of the show. In Deirdre’s Lip, 1978—of which the last special edition will be installed in the exhibition—Beckley describes a phone conversation through byproducts of speech: three puffs of breath from three overheard words, a raised red lip, a train whistling in the night. These works demonstrate he is much more than a storyteller – he is a visual poet. Like verse, his work invokes all fives senses through more than just one medium.

The narrative work in the exhibition represents the last of the Cibachrome photograph printing process, now impossible to recreate. Cibachrome is a uniquely robust, almost glowing, printing process, which Beckley used for its sensual qualities and almost object-like presence.

Concurrent with The Accidental Poet (The Avoidance of Everything), Beckley’s performance work Turtle Trumpet from Willoughby Sharp’s ‘Pier 18’ exhibition (1971), will be included in the exhibition Art on Camera: Photographs by Shunk-Kender 1960-1971, opening at the Museum of Modern Art, New York on May 17, 2015 and on view until October 4, 2015.