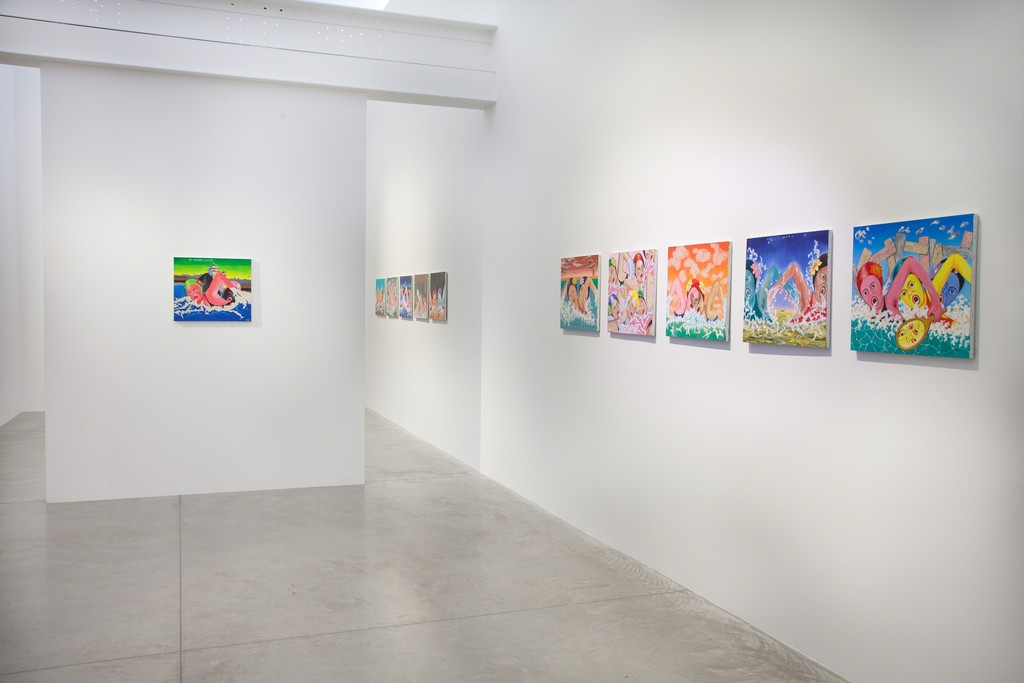 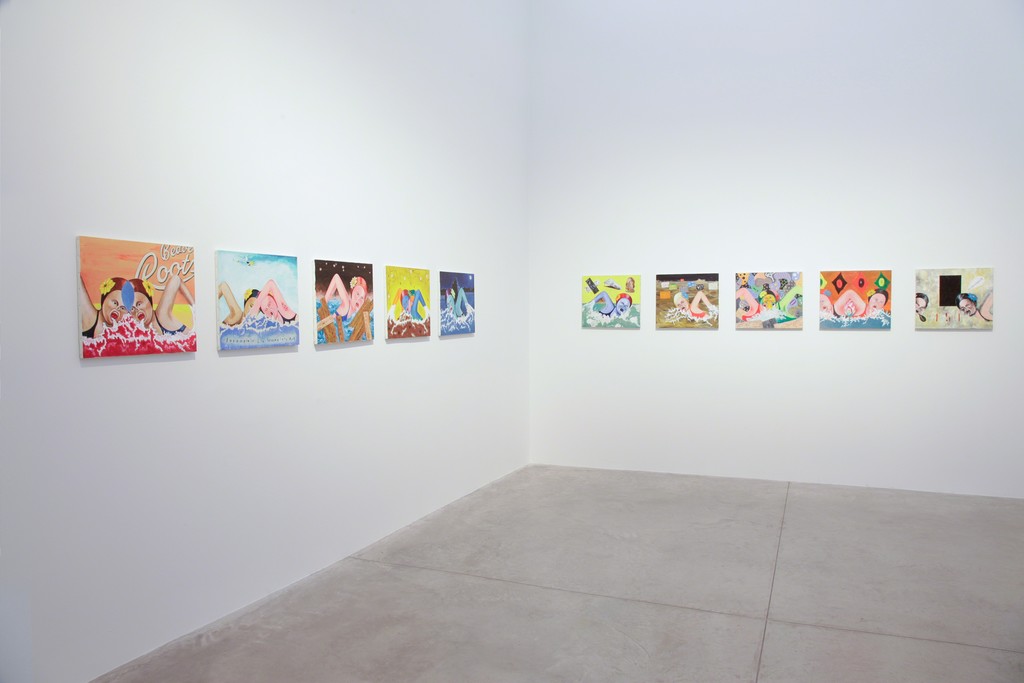 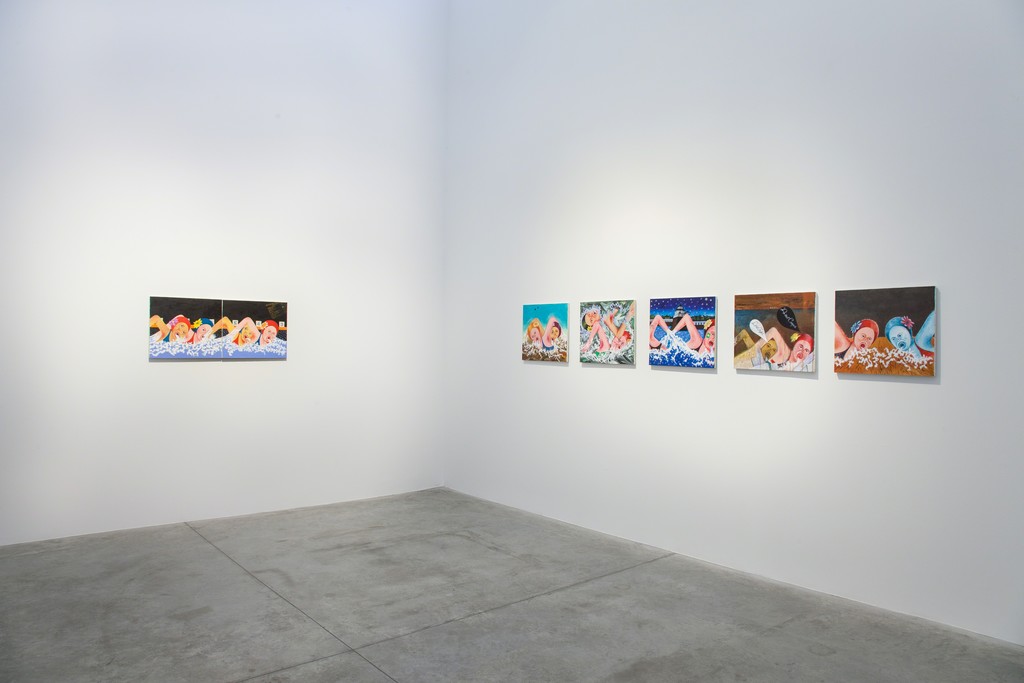 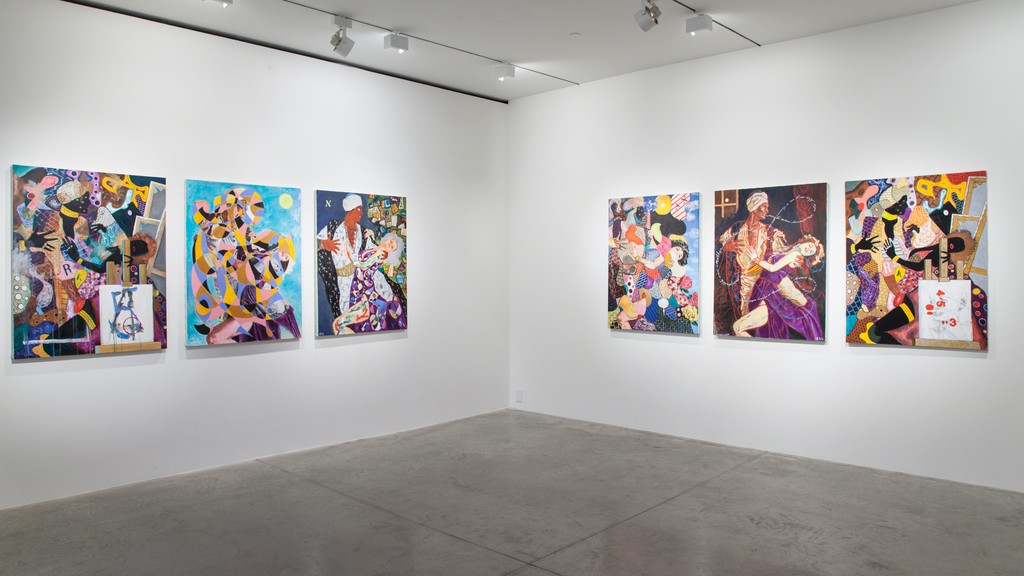 Albertz Benda is pleased to present 49 Years Later, a solo exhibition of new work by acclaimed Japanese artist and 2015 Praemium Imperiale laureate, Tadanori Yokoo. On view from November 12 through December 19, the exhibition offers a rare opportunity to view a series of never-before-seen paintings expanding upon two major themes, the swimmer, an ongoing investigation throughout Yokoo’s storied career, and the dancing couple, a new motif borrowed from old Hollywood. Yokoo explores these seemingly quotidian subjects—a woman swimming, a couple dancing—through a variety of perspectives, locations, and degrees of surrealist interpretation. The outcome is two strikingly vibrant, playful bodies of work that offer alternative and evolving views of the everyday.

Yokoo first worked with the theme of the swimmer in 1966 and it remains an integral part of his oeuvre. Yokoo acts as a self-plagiarist, taking and distorting images that he creates. In keeping with his practice, he builds upon his early iconography, showing a depth and continuity in his exploration. Throughout the series, the same swim cap clad girl trudges through the water with her mouth agape. Yokoo brings a different meaning and composition to each of his paintings through a variety of settings that serve to decontextualize and re-contextualize the swimming girl, as well as expand on our understanding of Yokoo’s work. In one painting the swimming girl is set in open water under a night sky, in another she is racing against her duplicated self. Yet in another, her face is distorted in possible desperation. Yokoo’s repetition of the same image reveals an array of styles he has developed over the past fifty years, allowing him to explore multiple dimensions within the same set of images.

The second series featuring dancing couples—a new theme for the artist—is a shift away from his early work. Its emphasis on vivid colors and nuanced repetition presents a stylistic evolution. Each painting in this series incorporates a woman and a man holding the same dramatic dance pose, taken from classic Hollywood imagery. The series favors geometric shapes and bold colors, an expansion of Yokoo’s painterly vocabulary. The trope of the romantic Hollywood couple is altered and deconstructed yet still visible. The series picks up where Yokoo left off with his acclaimed Teshima Island exhibition, a permanent installation in which Yokoo converted three one-story homes into a collage-like art museum in 2013. The winding pathways in the ancient fishing village at Teshima Island are echoed in the mosaic imagery of Arabian Dream The Sky and the Roses, a painting that borders on being wholly abstract.

The two motifs intersect in the boldly titled painting, No Goal for Art. A dancing couple in the foreground is joined by one of the famous swimming girls, above which is written No Goal for Art. The work captures the surrealist nature of Yokoo’s practice, as it unites one of his iconic motifs with a recent one, bridging the gap between the past and present.

49 Years Later celebrates the through lines in Yokoo’s body of work as well as his lifelong commitment to painting, a highly personal medium and intimate means to communicate his creative vision. Tadanori Yokoo continually surprises with unexpected overlapping images, clever alterations, and cheeky repetition, challenging the way we read images in an era of media overload.