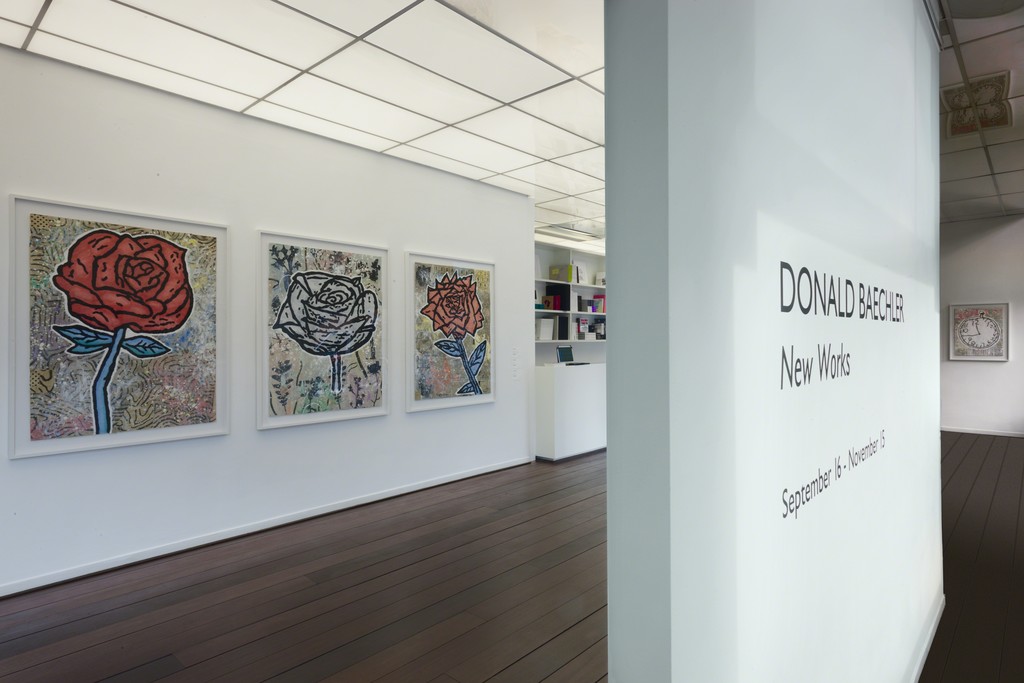 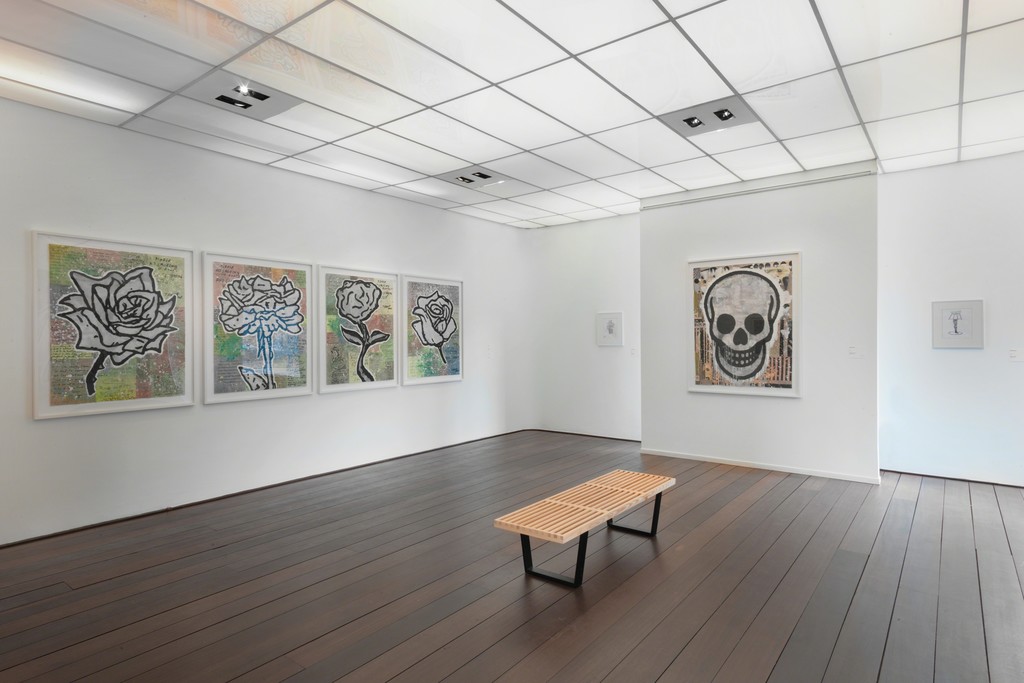 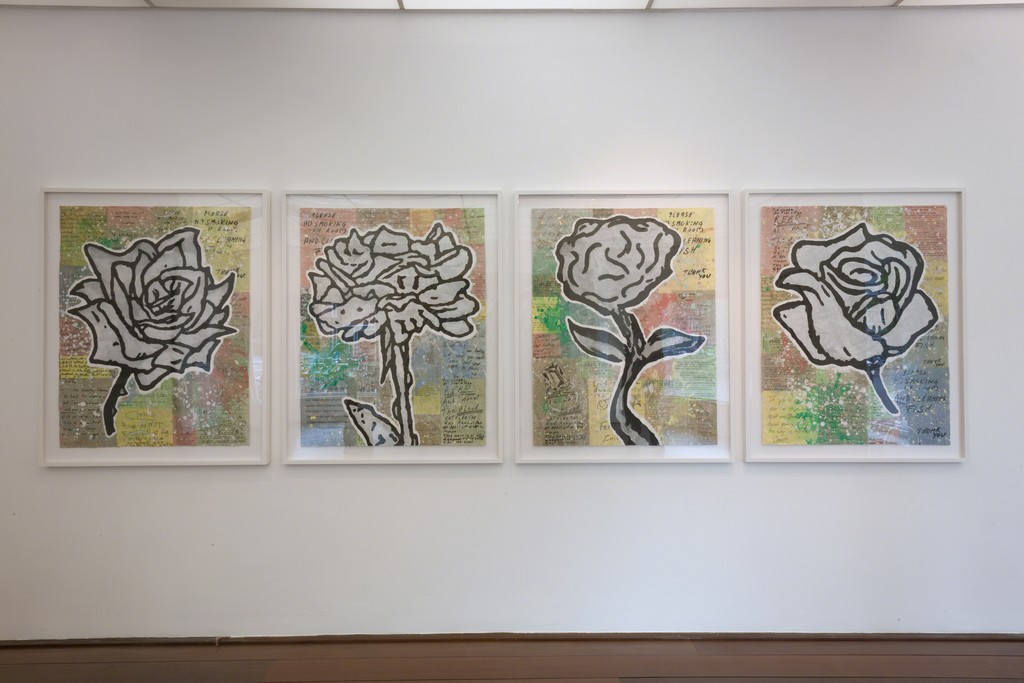 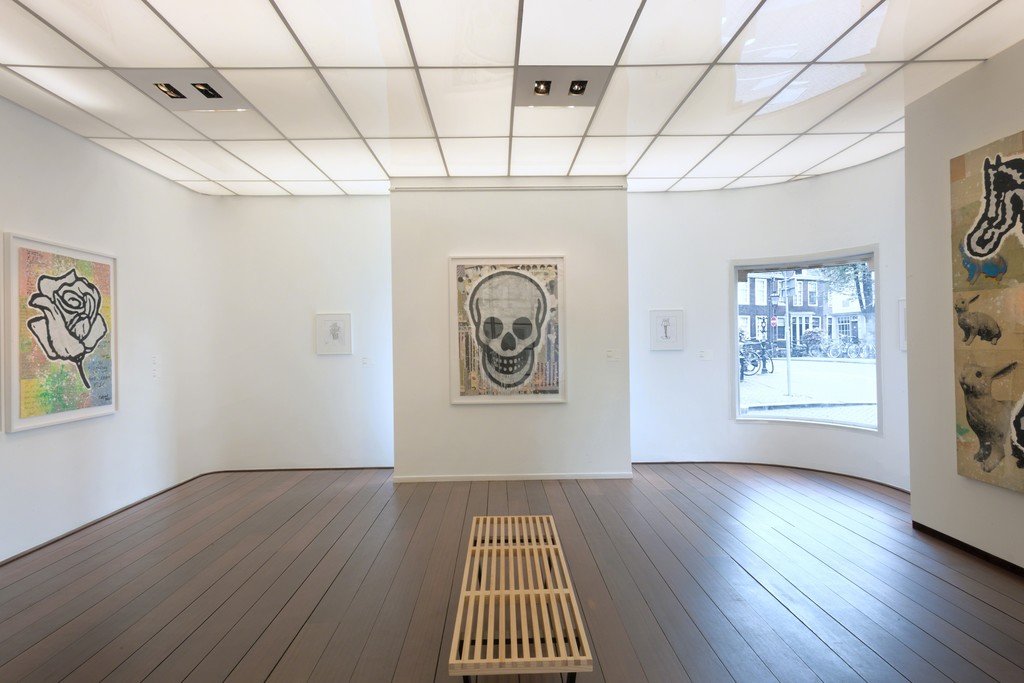 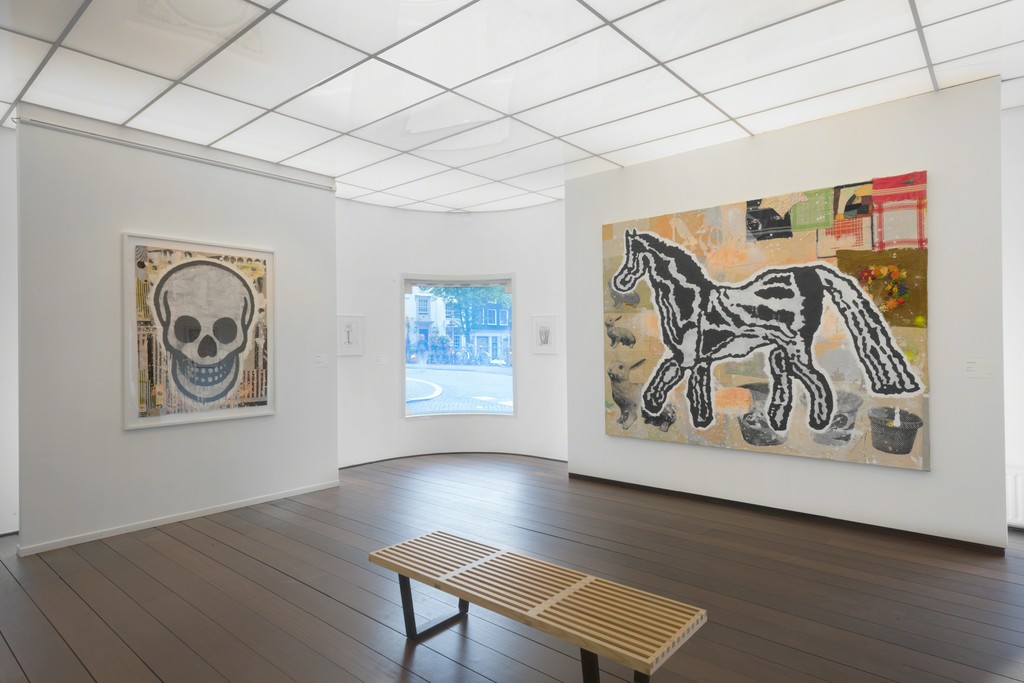 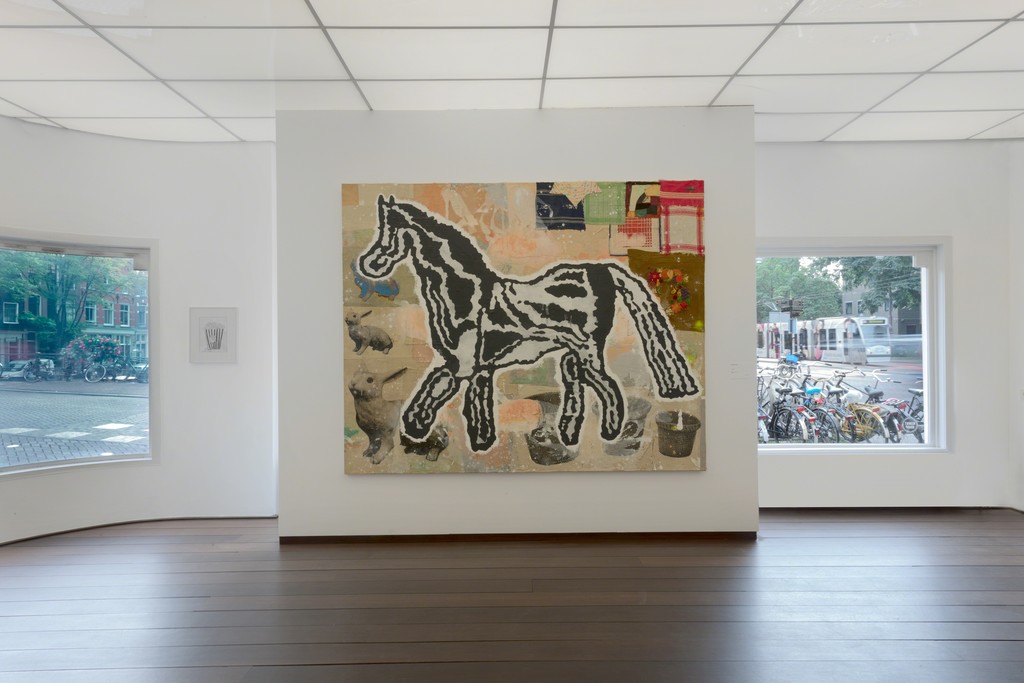 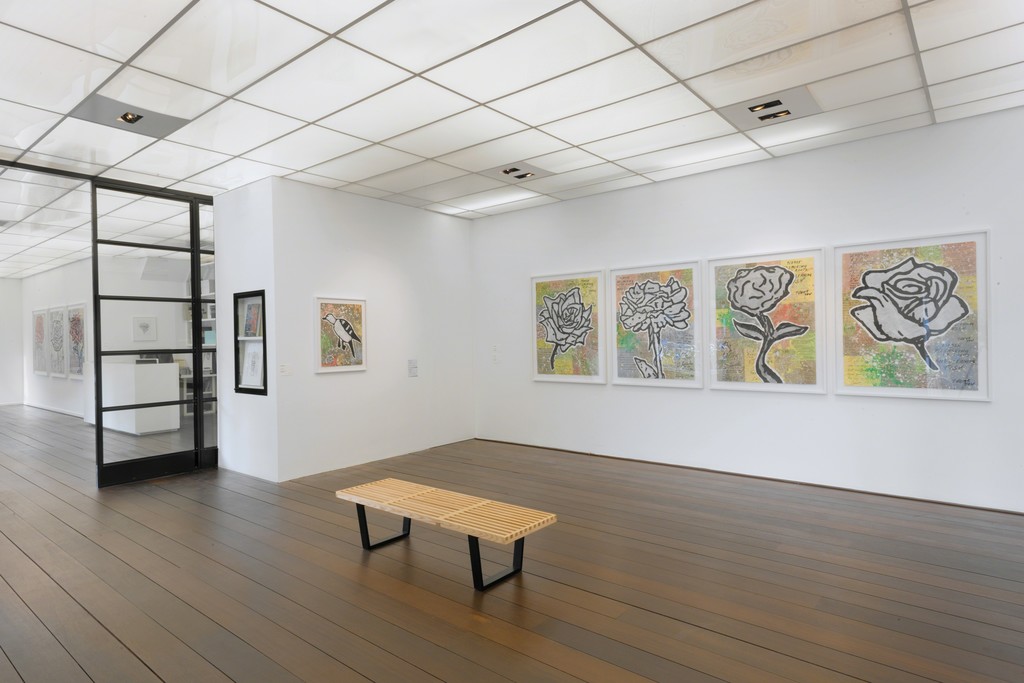 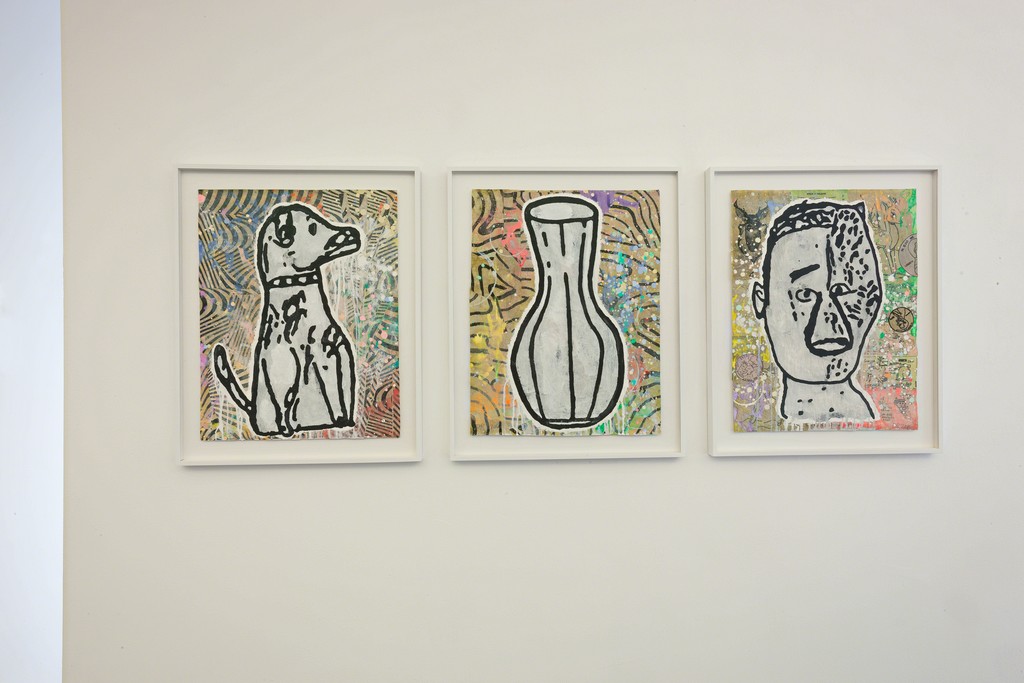 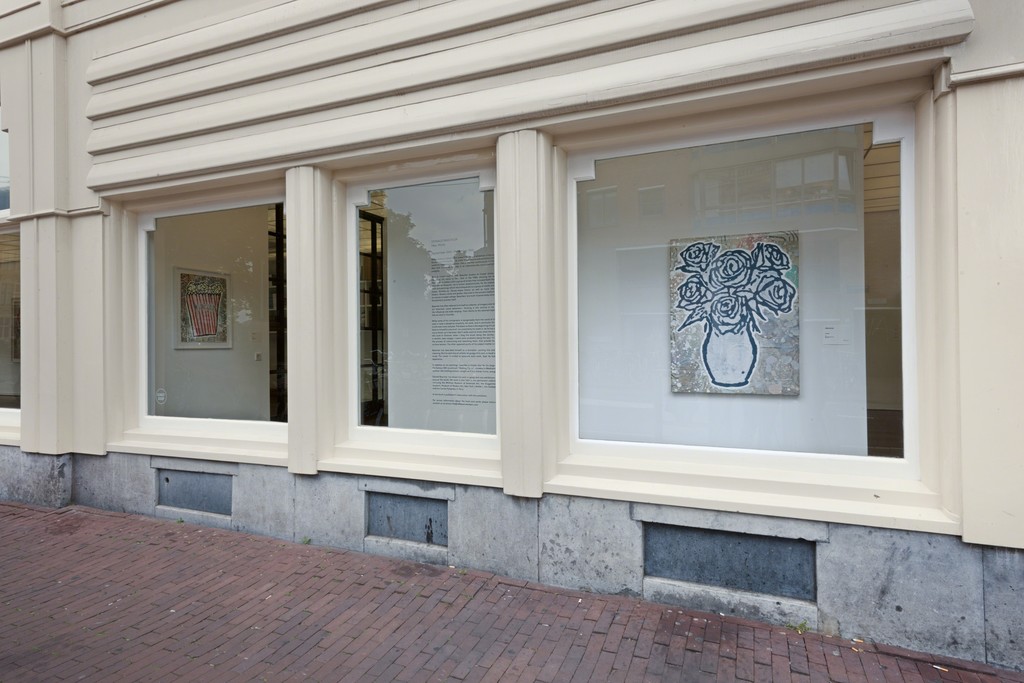 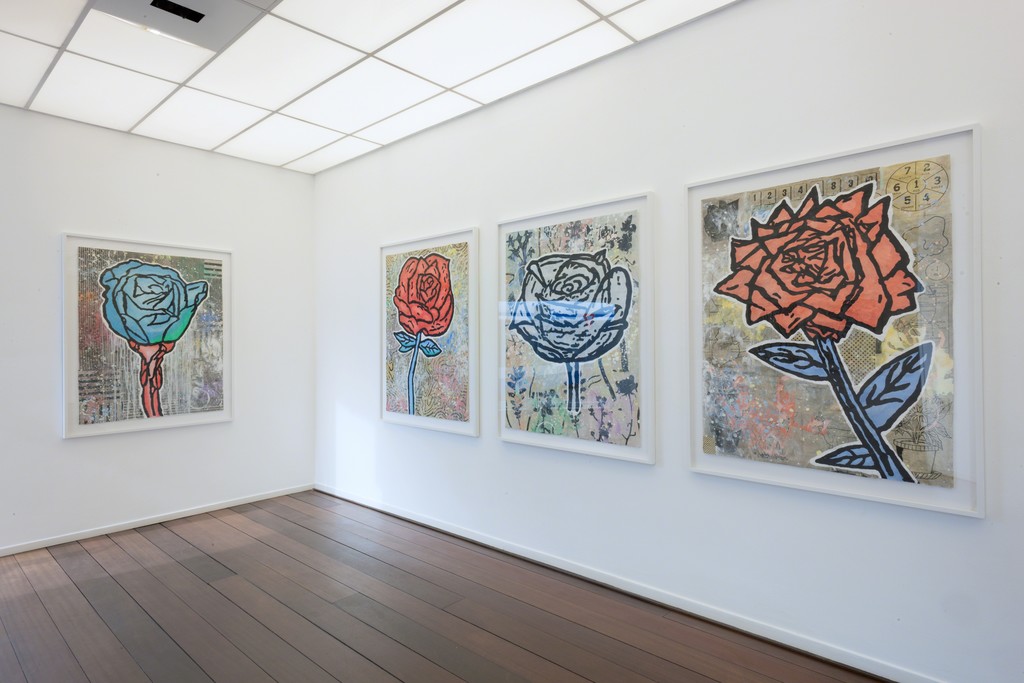 Reflex Gallery is delighted to announce a major exhibition of the work of Donald Baechler this September. This will be the first extensive exhibition in the Netherlands for the world-famous American artist. One of the few continuously active members of the 1980s New York art scene, Baechler is an internationally acclaimed artist with a remarkable pedigree.

Born in Connecticut in 1956, Baechler studied at Cooper Union, NY and in Frankfurt. He made his name in New York in the 1980s showing his work at the legendary Tony Shafrazi Gallery with a group of artists that included Keith Haring, Kenny Scharf and Jean-Michel Basquiat. He is known predominantly for his intensely reworked graphical work and paintings which returnfrequently to a group of motifs and characters: ice-cream cones, thumbs-up, Disney-esque fawns, as well as more clichéd images from art history – flowers, skulls and globes. Executed in the ancient medium of Gesso ,flashe paint on canvas or paper collage, Baechlers’ are multi-layered works which speak volumes about the painterly process itself.

Baechler has often referred to himself as collector, of imagery and references – biographical, art historical, visual ephemera – forming a rich archive in his work over the years. His influences are wide-ranging – from Giotto to the abstract expressionists to American folk art and Cy Twombly.

While some of his iconography is recognisably from the world of childhood, and could be said to have a deceptive simplicity, his work, and in particular his approach to his work, is infinitely more complex. The blank surface is the beginning of a journey for Baechler, one that he himself is unsure of – an uncertainty he revels in. As he has said “One reason I build my surfaces up is because I don’t really want to know what the line is going to do. I want this built-in fracture; when I drag the brush along the canvas, I don’t want it to be a smooth, easy voyage – I want some problems along the way.” It is these obstacles, and the process of overcoming and reworking them, that provide his work with a palpable surface tension. The often apparent purity of his subject matter is in a sense a misnomer.

Baechler has described himself as a formalist – putting line and form above narrative meaning. But his work has an artistic language of its own, a visual syntax that merits close study. The viewer is invited to excavate each work, layer by layer – a richly rewarding experience.

In addition to his paintings, Baechler is known also for his large-scale sculptural work. His famous 30ft aluminium “Walking Figure”, situated in Westhampton, NY, is a dynamic cartoon-like strolling woman, caught as if in a freeze-frame, energising her surroundings.

Donald Baechler has shown his work in group and solo exhibitions in prestigious galleries around the world. His work is also held in the permanent collections of art institutions including the Whitney Museum of American Art, the Guggenheim, Vienna’s Albertina museum, Museum of Modern Art, New York ( MoMA ), the Stedelijk Museum Amsterdam and the Centre Pompidou in Paris.

Reflex Gallery are delighted to bring together a selection of the freshest work by this American master.

A book in association with the exhibition will be released on the opening Friday September 16th in presence of the Artist.