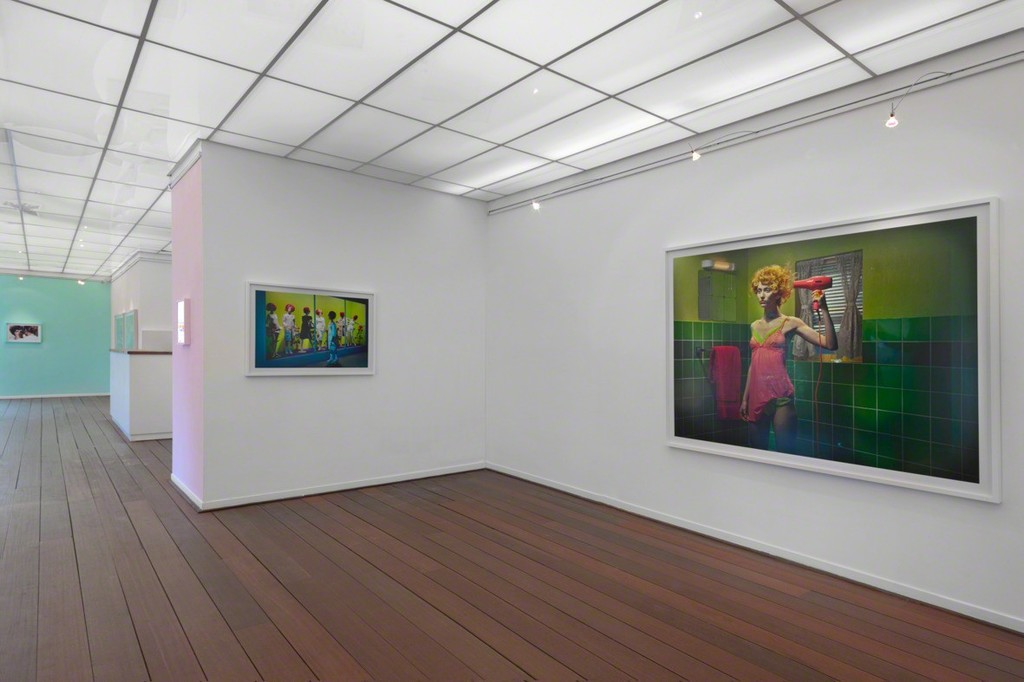 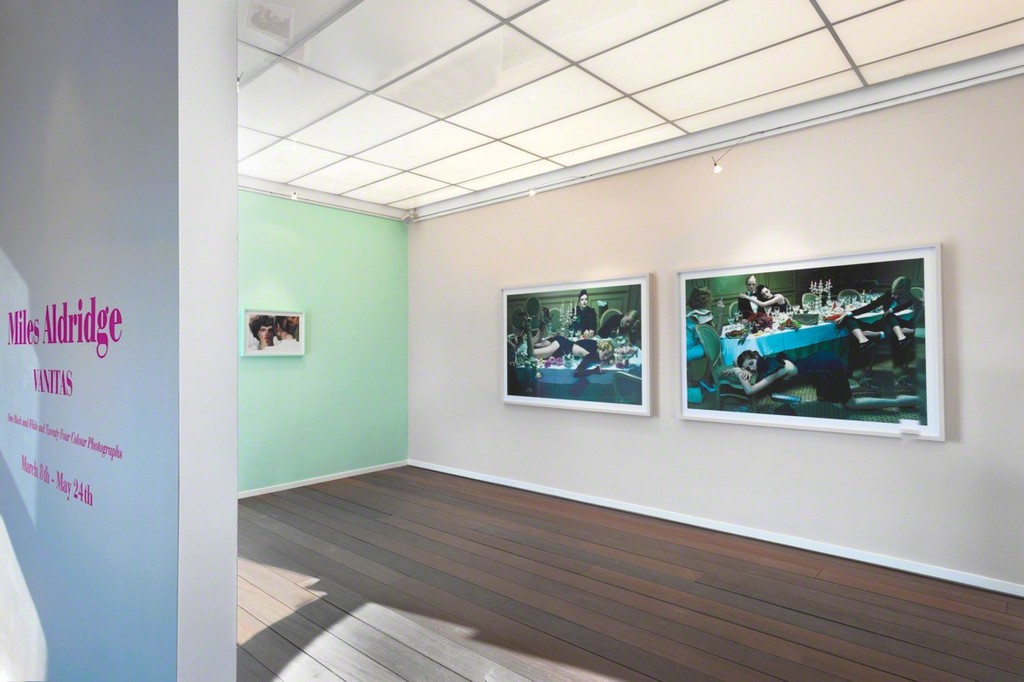 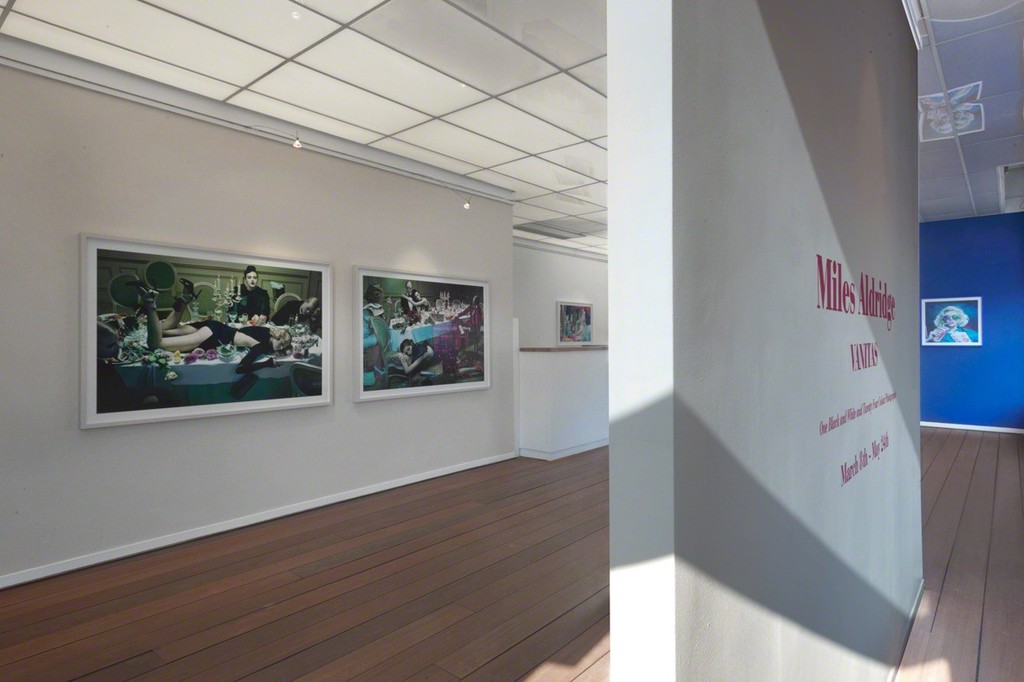 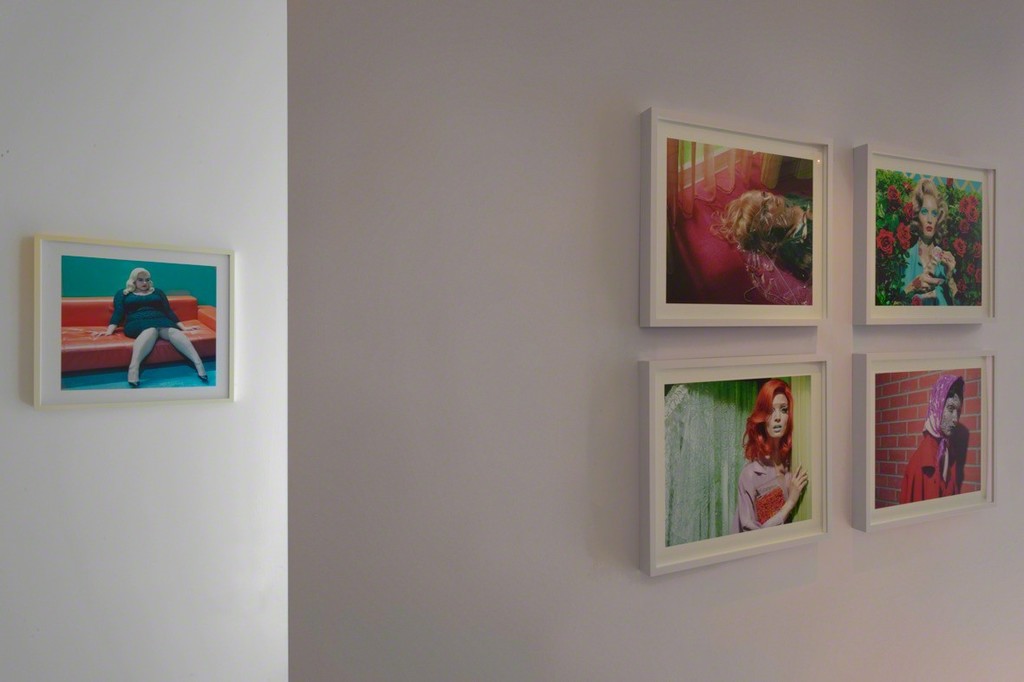 "VANITAS"
ONE BLACK&WHITE AND TWENTY FOUR COLOUR PHOTOGRAPHS ONE

We are proud to announce Miles Aldridge’s new solo-exhibition starting the 8th of March 2014. The show will consist of 24 large scale colour photogrpahs and one black&white photograph.

Miles Aldridge (*1964), born in London, studied at Central St. Martins, became a director of music videos, and then a fashion photographer in the 1990s. His work mixes autobiographical themes with influences as wide ranging as the fashion photographer Richard Avedon, film directors like Hitchcock, Lynch and Fellini and his father Alan Aldridge, the legendary art director, who created seminal artworks for The Beatles. Aldridge’s photographs always transmit a certain cinematic feeling. “Miles sees a colour coordinated, graphically pure, hard- edged reality”, says David Lynch about Aldridge’s work. They are mostly known for the beautiful, glamorous women who seem to be living in perfect worlds. But when you look closer, their worlds aren’t as perfect as they seem. It’s a dream that could just as easily turn into a nightmare. Their blank expressions and perfect appearances could be interpreted as passivity. Miles Aldridge prefers to define his women as in a state of contemplation, which leaves the viewer wondering about what’s going on in their heads. The power of these photographs is created by the tension between the exterior perfection and the internal turmoil. As Aldridge explains himself, “A slightly uncomfortable quality is what I’m after. I don’t feel like making happy pictures about beautiful models being content. These pictures... They’re pictures of humans, not mannequins. They’re troubled, wounded and confused, questioning who they are now that they have everything they want.” It is his mother's influence that comes through heavily in Aldridge's tension-filled photographs of women. "These women are more complicated than being purely beautiful and they have this deep, dramatic life," he says.
2013 has been an eventful year for Miles Aldridge including a large retrospective
I Only Want You To Love Me opened at Somerset House in London and his new book by the same name published by Rizzoli. He also published Carousel a limited edition box set of 32 silkscreen and lithographic prints, which will also be on display at the exhibition.

Miles Aldridge’s work has been published in numerous influential magazines like American Vogue, Vogue Italia, The New York Times and Numéro. Reflex Amsterdam has published several monographs in collaboration with Miles Aldridge, such as Acid Candy, The Cabinet and Kristen matching his solo-shows by the same name.
The opening took place on Saturday, March 8th 2014 between 5 and 7 pm.

A new book, One Black&White And Nineteen Colour Photographs By Miles Aldridge, has been designed by Graphic Thought Facility and published by Reflex Editions Amsterdam. Signed copies are available.