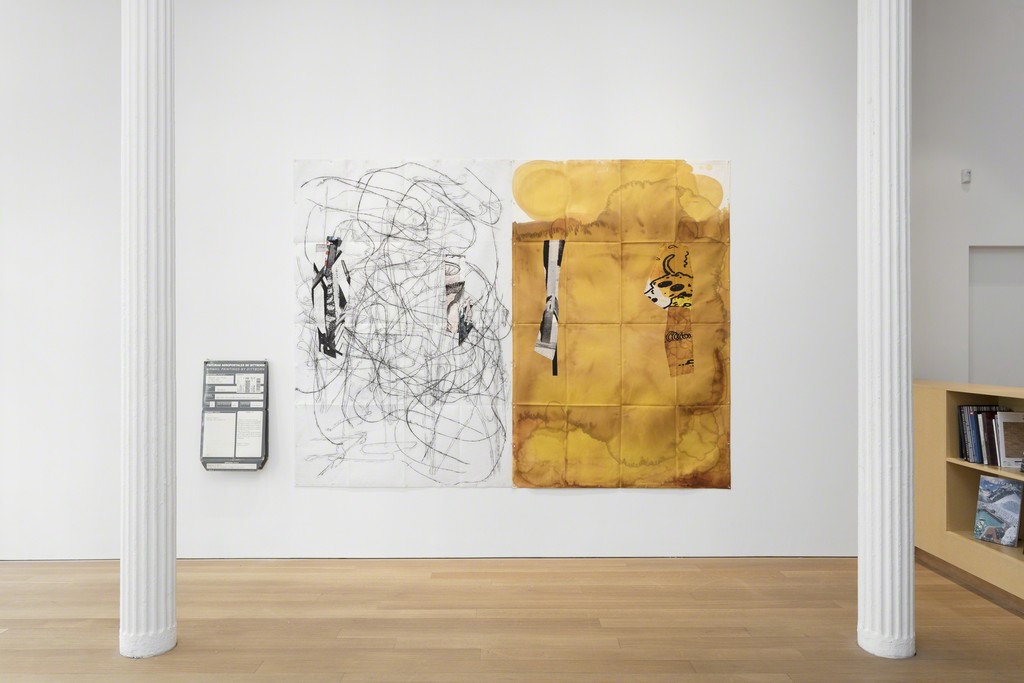 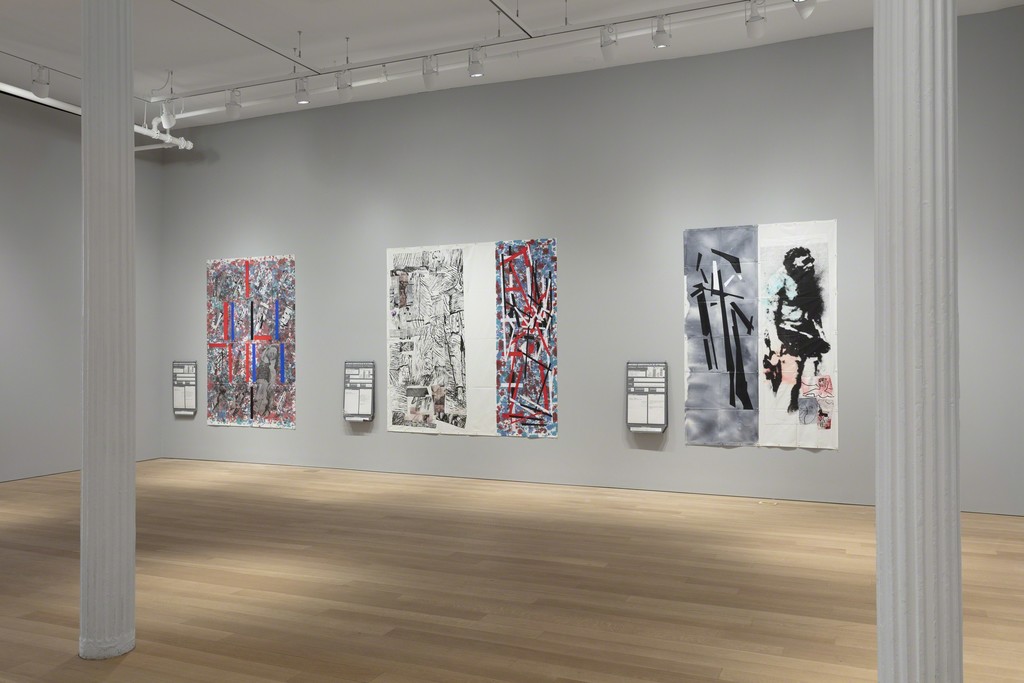 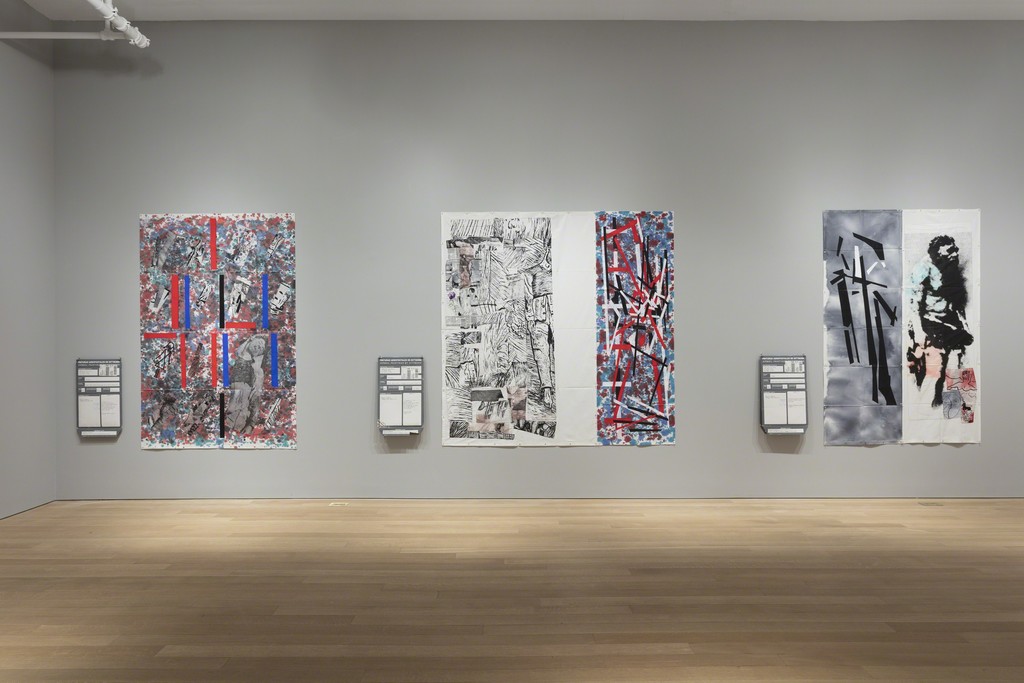 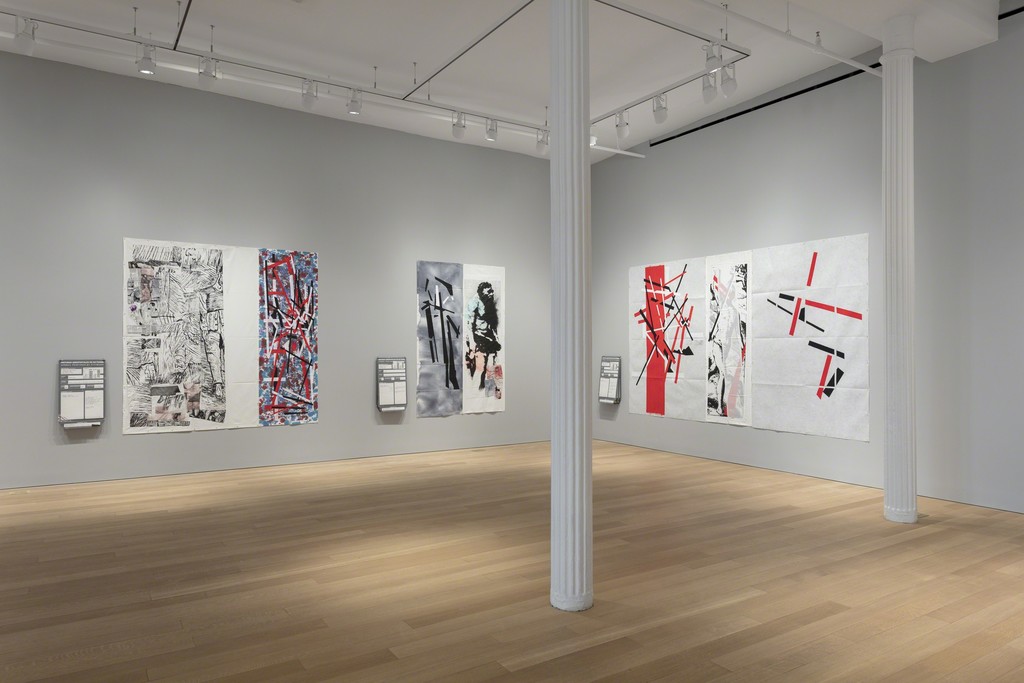 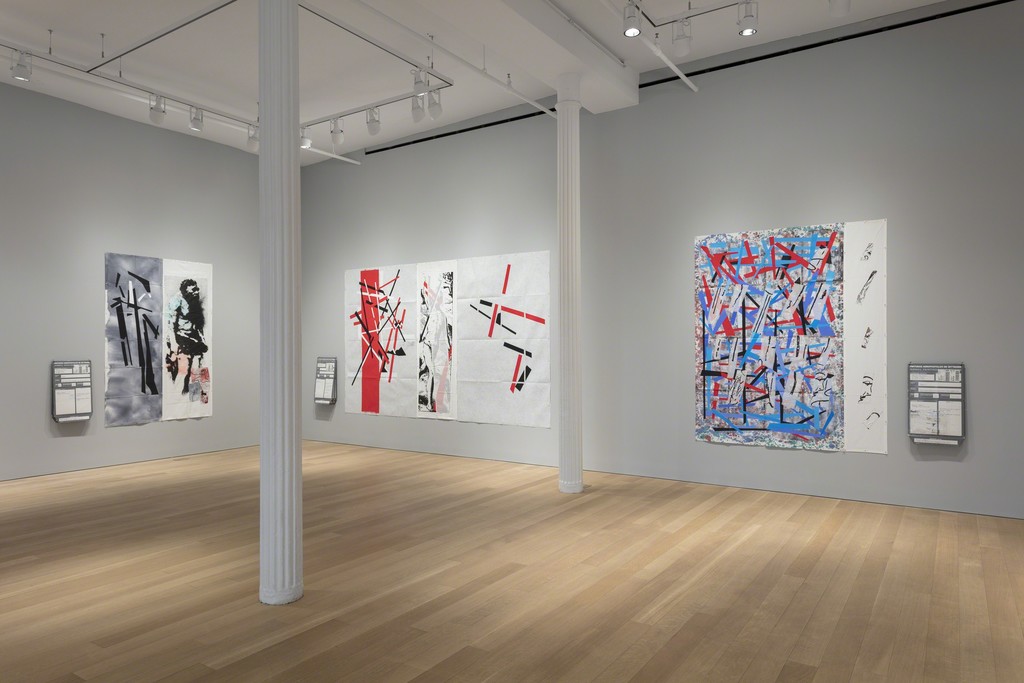 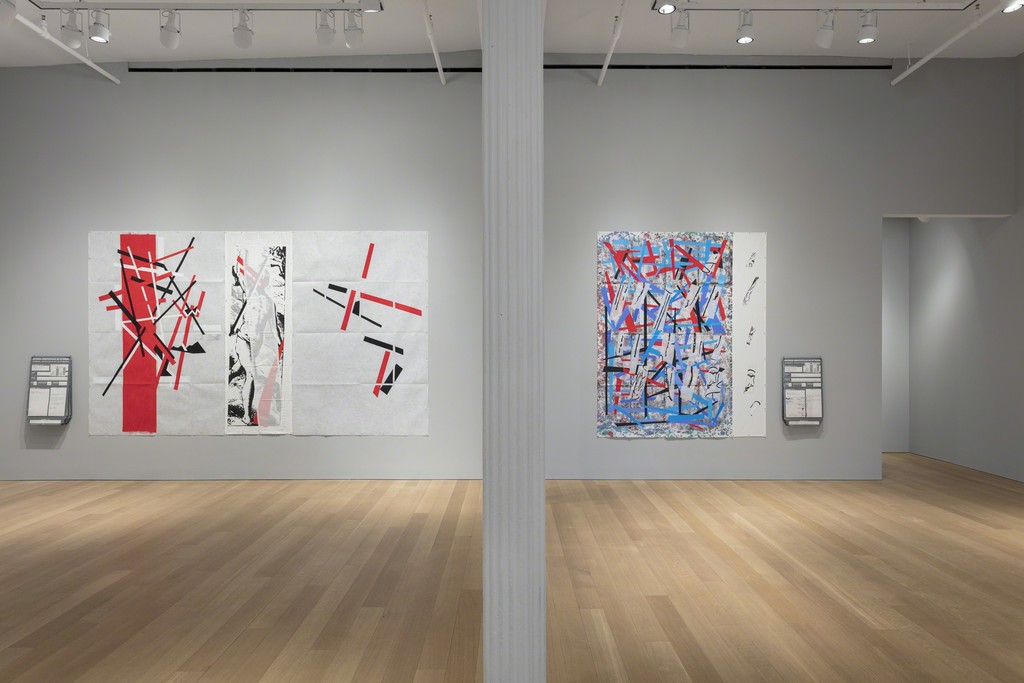 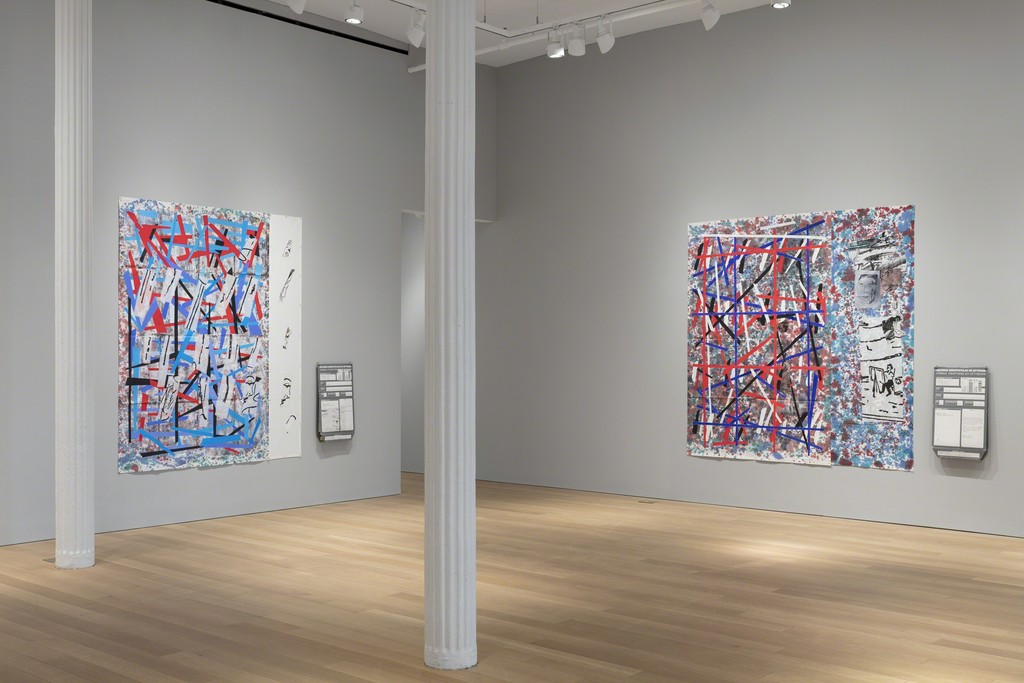 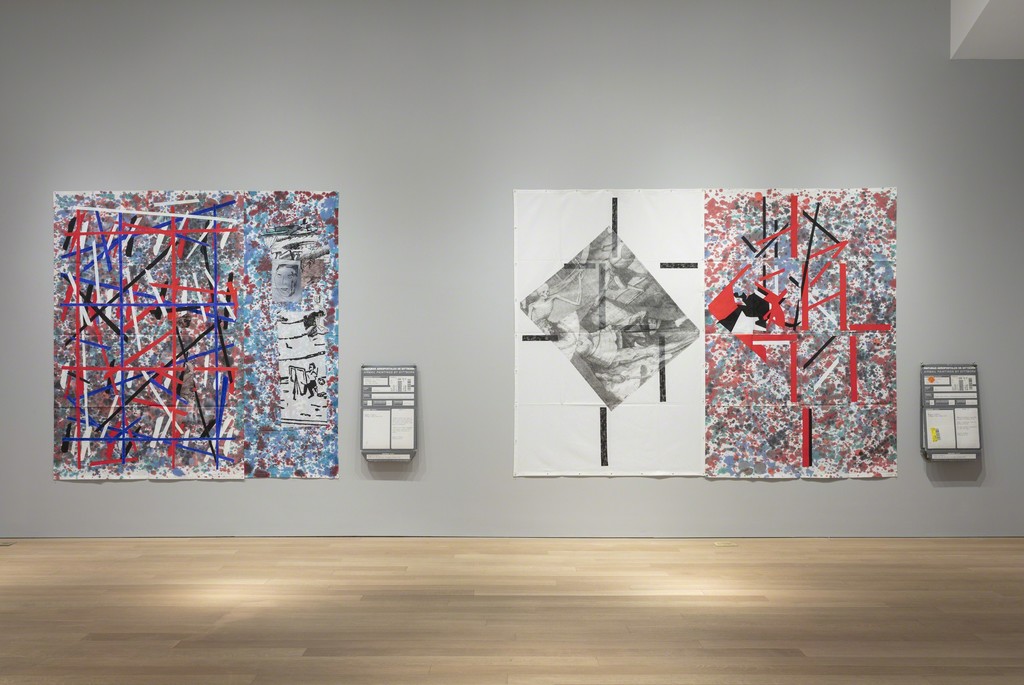 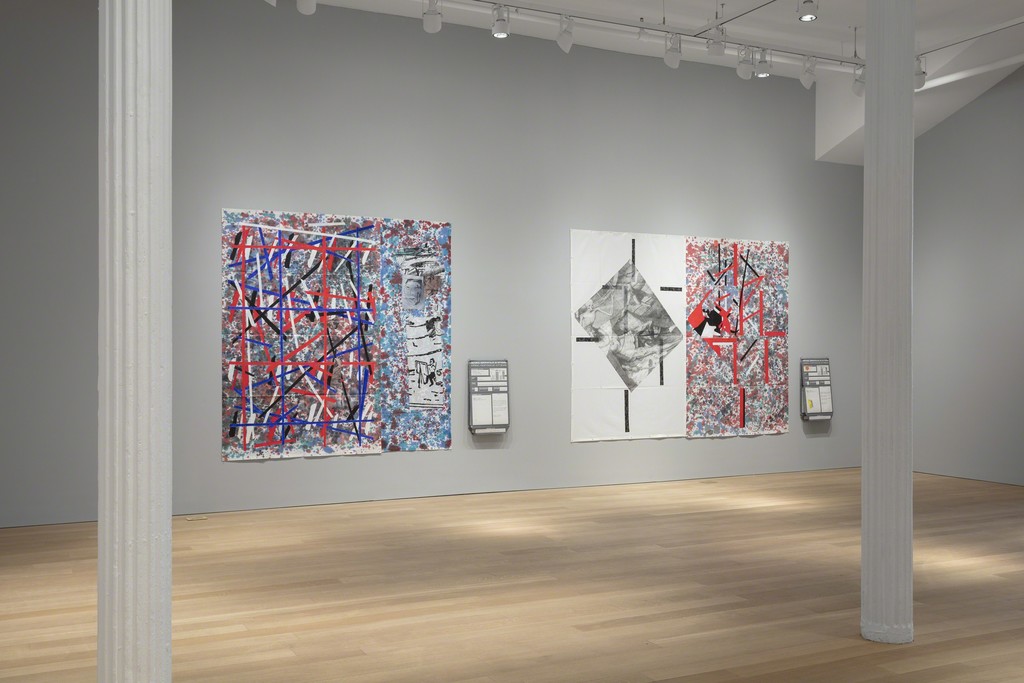 Eugenio Dittborn invented the format of Airmail Paintings in 1984. An innovative form of expressive support, the Airmail Paintings consist of large sections of pliable materials, which are then folded, inserted into specially designed envelopes, and mailed to an international place of exhibition. When received, they are unfolded and pinned loosely to the wall, the creases of their travel carefully preserved. The envelopes in which they arrived are hung alongside the works, bearing the stamps and traces of the journey they undertook. Conceived during the Pinochet dictatorship, Airmail Paintings were ‘a pragmatic invention,’ allowing ‘Dittborn to communicate beyond the borders of Chile without depending on the existence of an elaborate cultural infrastructure.’ Dittborn has continued his signature modus operandi, as a metaphor for geographic and cultural distances, global image transmissions, and a broad range of social and historical conditions.

Dittborn’s new Airmail Paintings exemplify some of the key technical procedures of the series. From single sheets to three panel works, the Airmail Paintings are made on two types of materials; a light synthetic non-woven material and an absorbent duck fabric. These sheets, in turn, become the repository for the enigmatic assemblage of marks, stains, dye, frottage, silkscreen grafts, embroidery, and stitches. Dittborn uses photo-silkscreen to incorporate diverse imagery; fragments found in magazines, newspapers, books, and sketches. Ranging from reproductions of well-known engravings and paintings to vernacular printed matter, how-to manuals, and cartoons, the images are carefully juxtaposed, or superimposed to create a hybrid and suggestive pictorial poetics. While the works presented retain many of the hallmark features of prior Airmail Paintings, they are marked by multi-chromaticity and the incorporation of dynamic bars of color, which imbue the work with a strong aesthetic presence. Parallel diagonal lines recur throughout the series, a pictorial mark which Dittborn has referred to as “palotes” (in English, “pre-writing strokes”)—the repeated lines that children draw as a first step toward leaning how to write. A brochure containing an essay by Laura Braverman will be published by Alexander and Bonin to accompany the exhibition.

Two video works from the 1980s will be on view in the video gallery. In Cinco Bocetos Preparatorios para la Historia de la Música (1986/2008), Dittborn extends his use of heterogeneous sources to the realm of moving images. Contrary to what its title might suggest, the video does not provide a continuous, linear narrative but is defined by interruptions, slow downs, stoppages, and repetitions. In a similar way, El Crusoe (1990/2008) uses constant visual distortion to generate a sense of continuous tension. The viewer is stuck in a space of unease, echoing the paradigmatic condition of the video’s central figure, Robinson Crusoe, a character at once protected and imprisoned by his location.

Eugenio Dittborn (b. 1943, Santiago de Chile) lives and works in Santiago de Chile. His most recent solo exhibitions took place at Museum Het Domein, Sittard in 2013, KOW, Berlin, and D21 Proyectos de Arte, Santiago, both in 2014. In 2015, his work was the subject of a solo installation at the Pontificia Universidad Católica, Santiago. Dittborn’s work is included in numerous museum collections, such as the Museum of Contemporary Art, Brisbane; Tate Modern, London; the Los Angeles County Museum of Art; Fundación Jumex, Mexico City; the Museum of Modern Art, New York; and the Art Gallery of Ontario, Toronto.