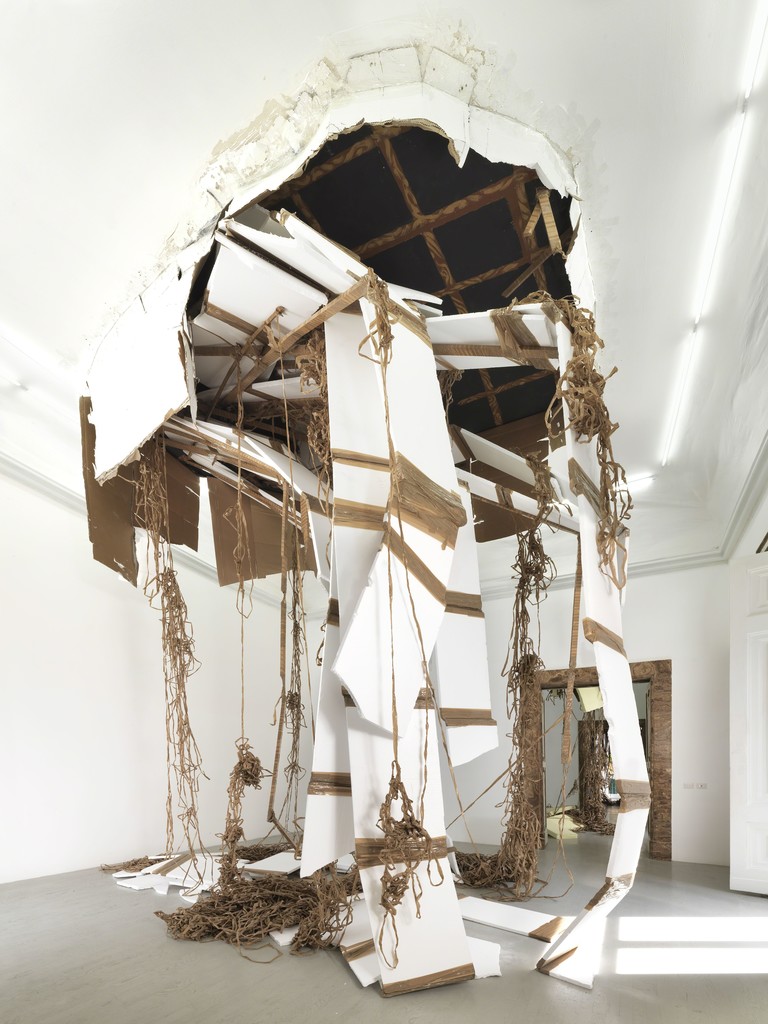 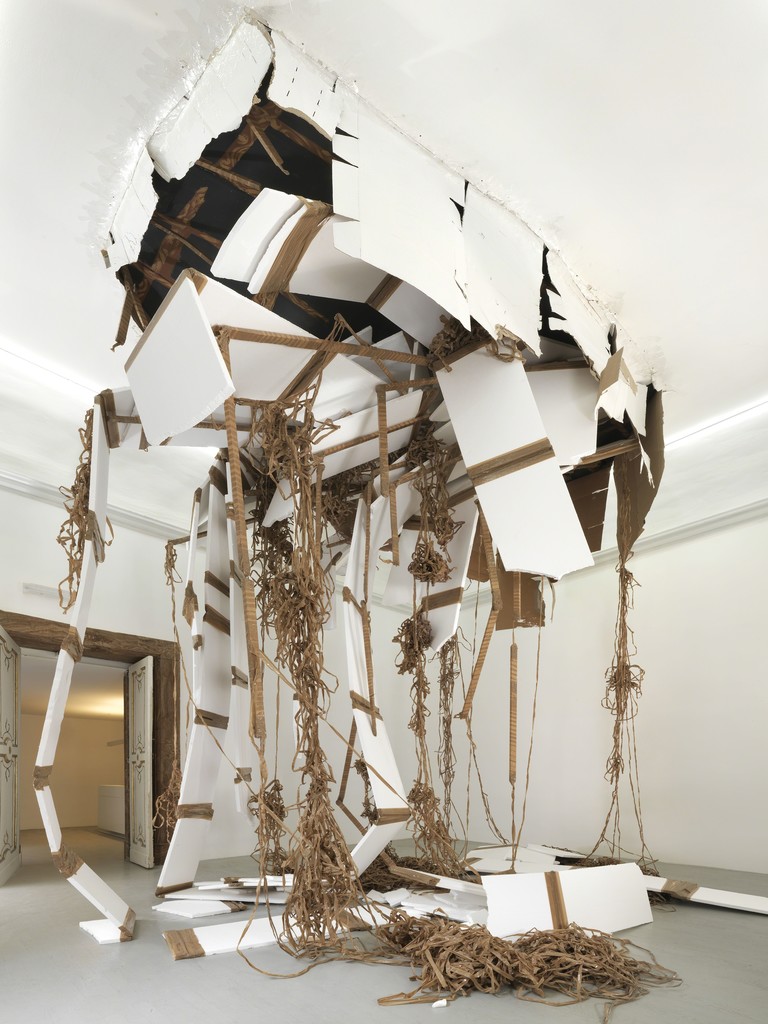 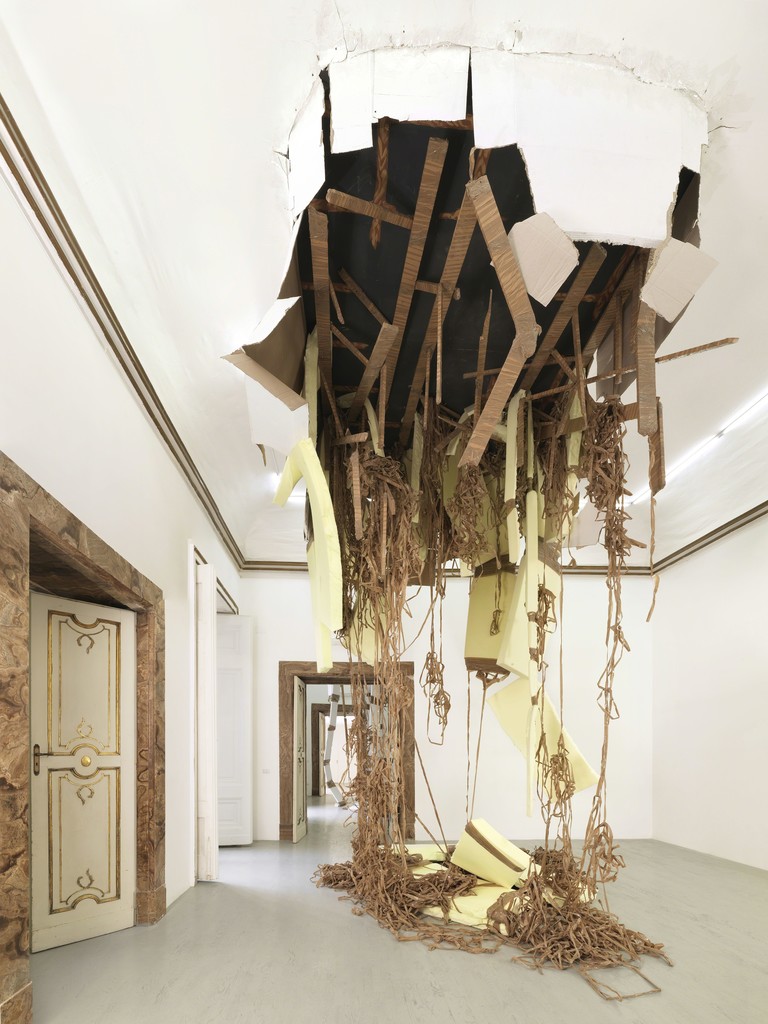 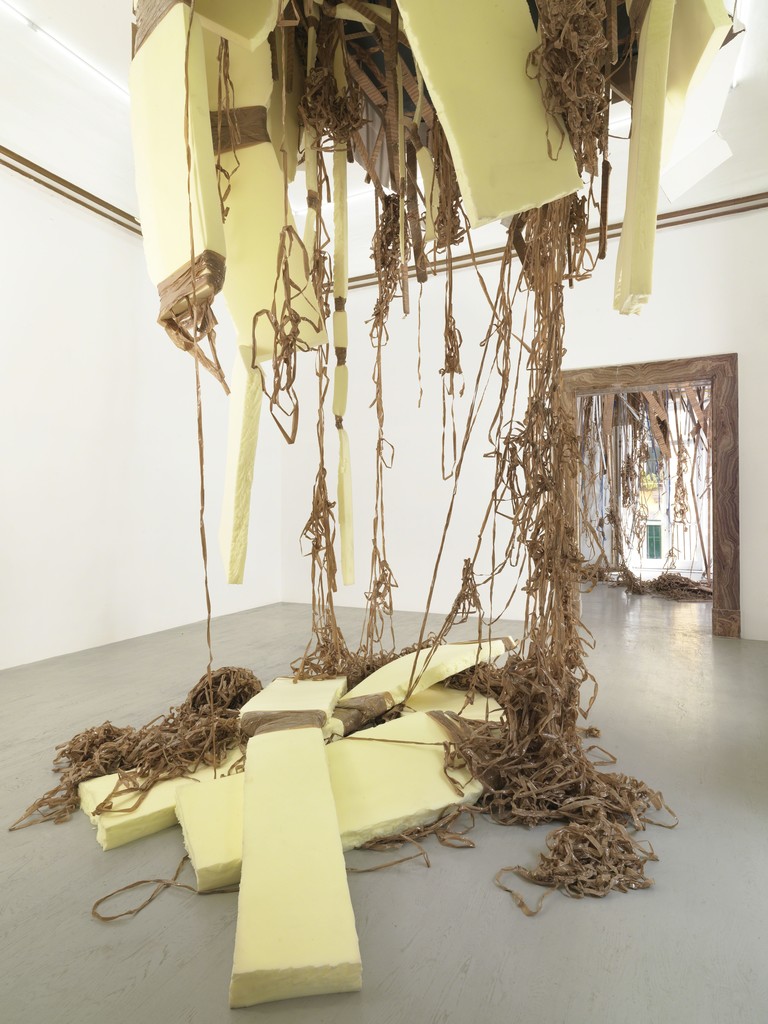 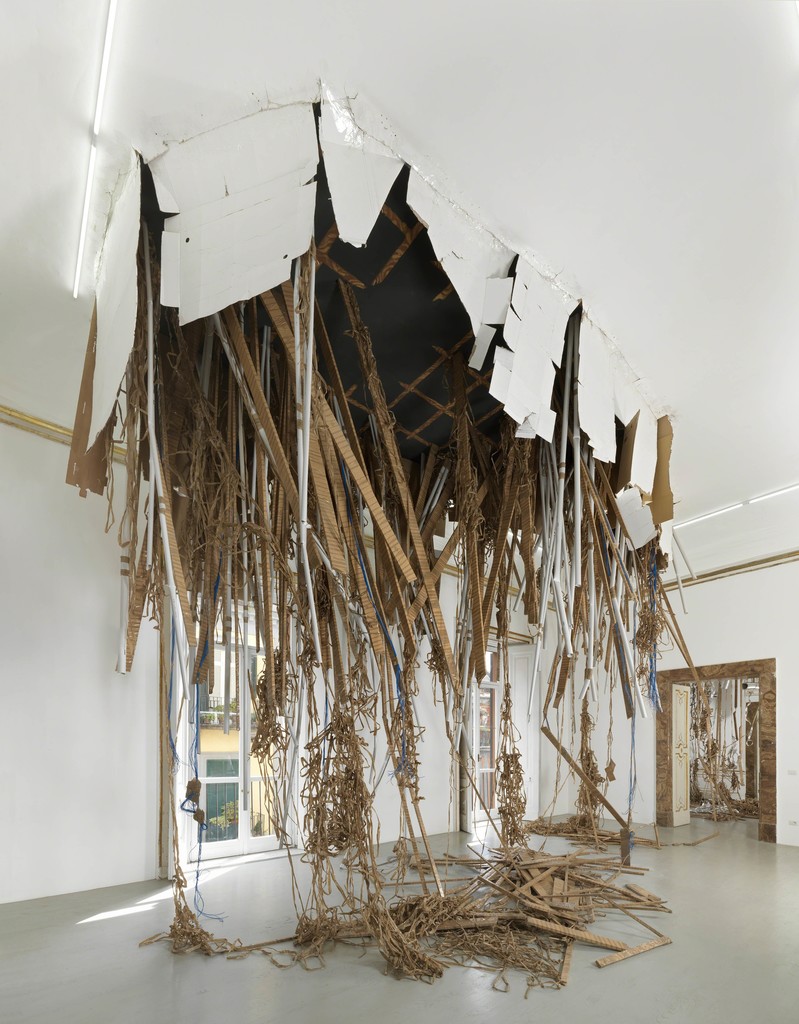 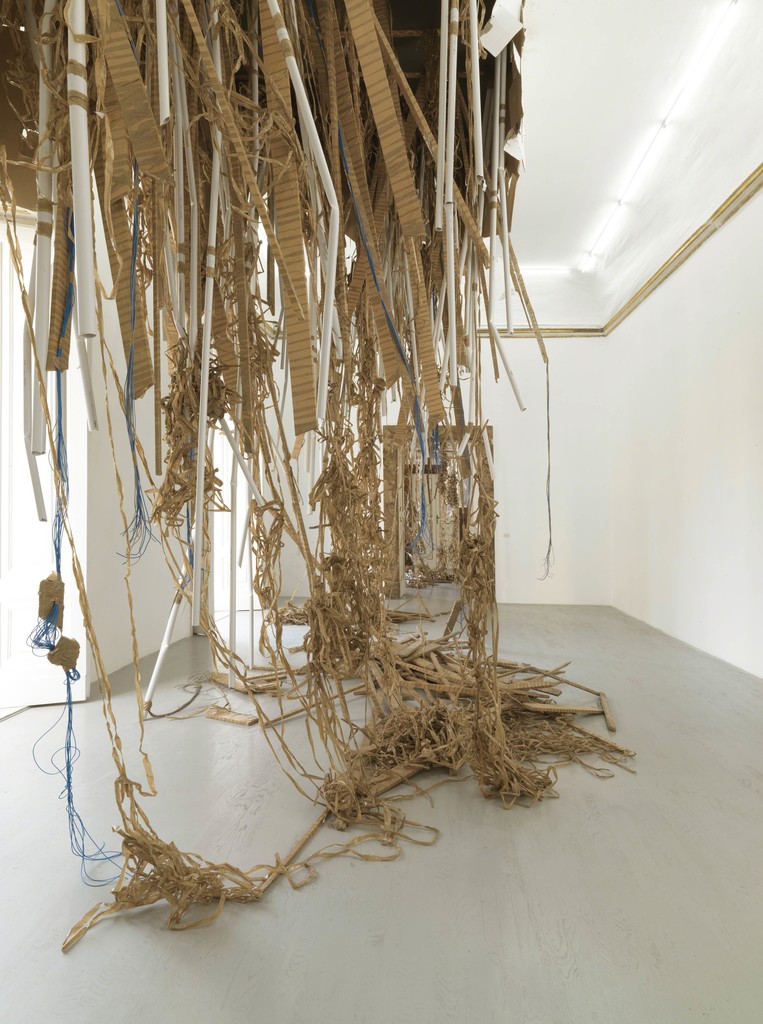 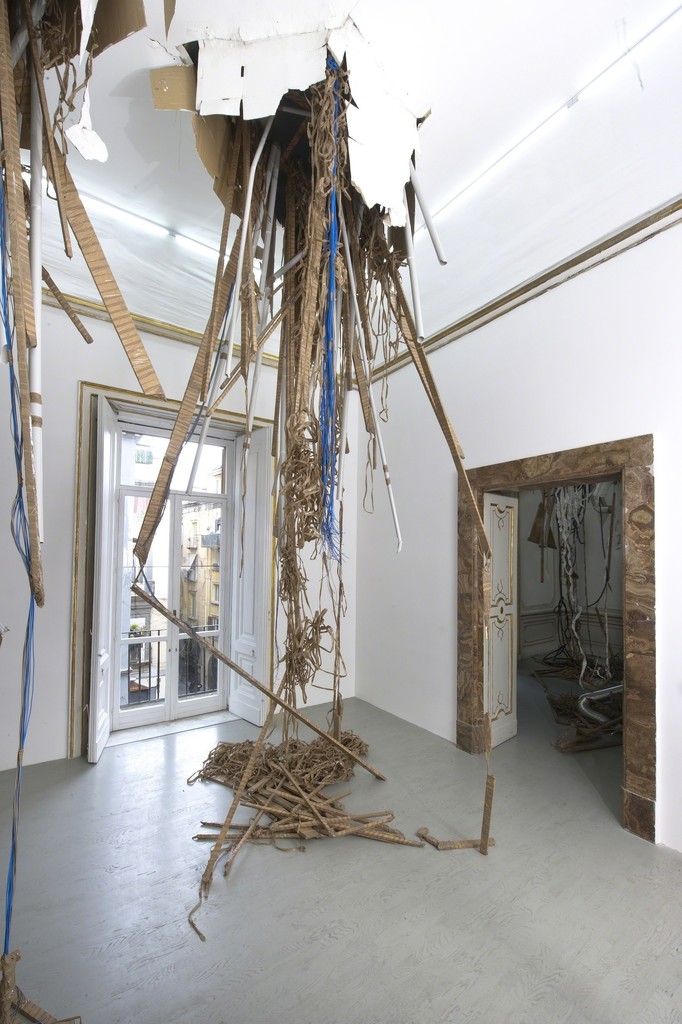 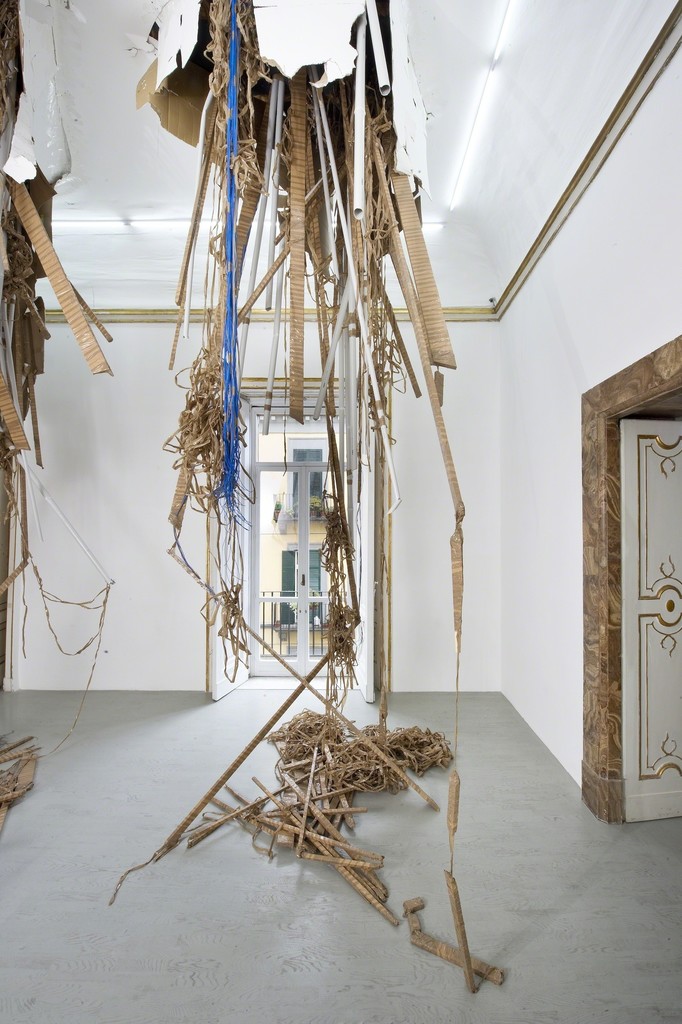 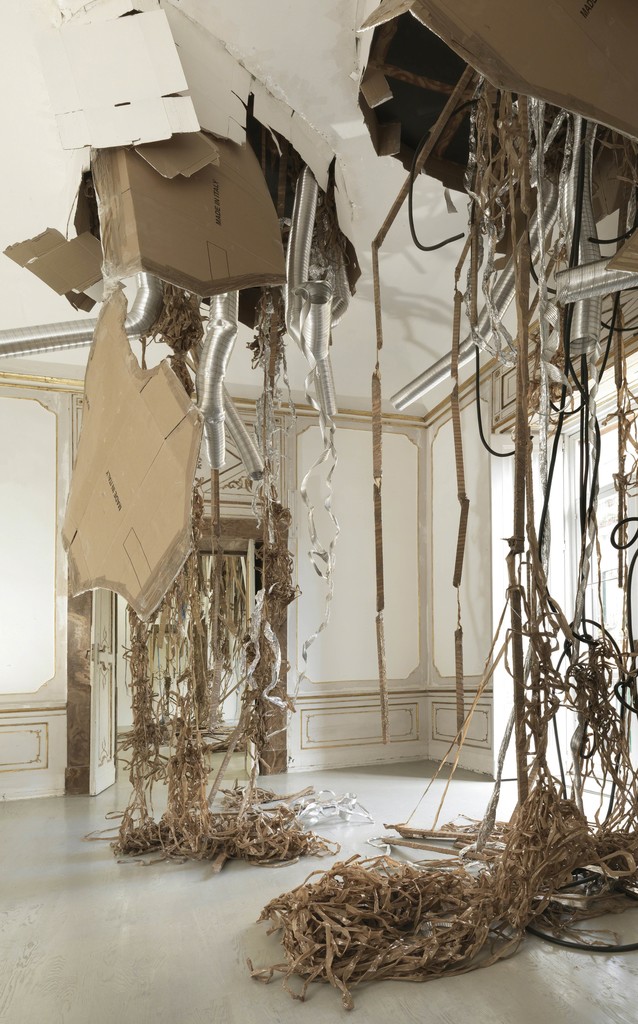 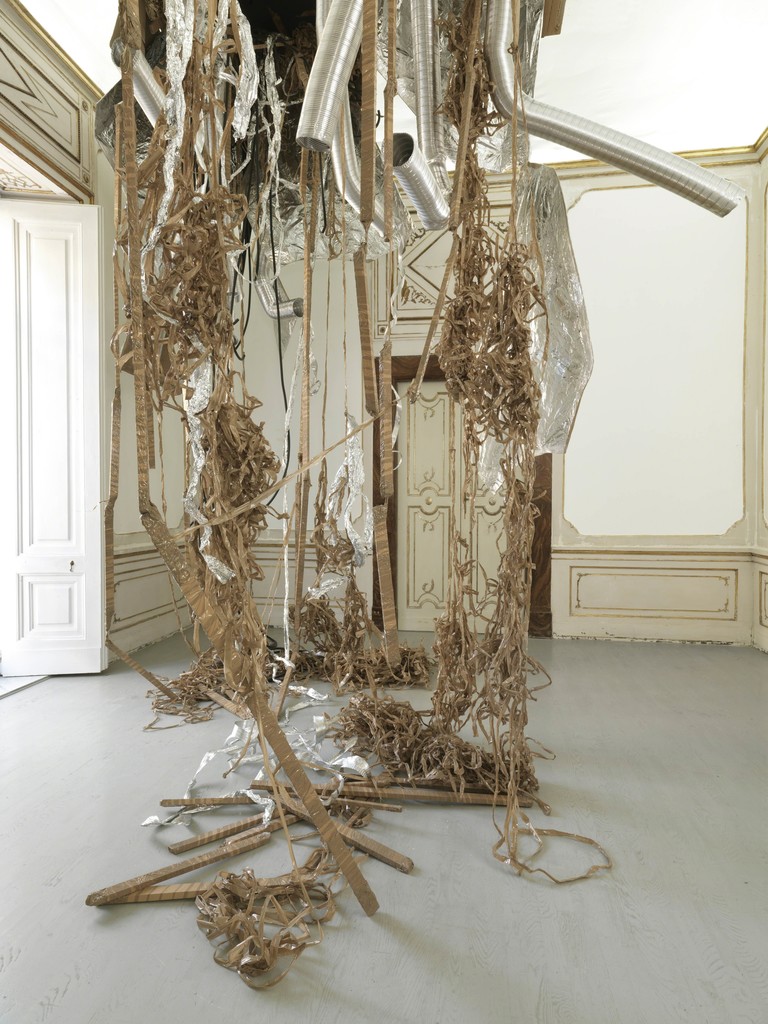 " Break-Through is the title of this collection of sculptures. It is a new form of sculpture, composed by several pieces which follow one another in the gallery space. This new form of sculpture hangs from the ceiling, from above, falls from above. The floor and walls stay unblemished, as they are too perfect to allow any intervention on them, a break-through is not possible. The only place that makes it possible is the ceiling. That is how Break-Through has found its place. The ceiling is not only the sole available place – it is also the place from which gravity exerts its force majeure. It is the sense of gravity that makes it fall from above. And it is from above that a breakthrough is possible downwards. The opening is the evidence of the collapsed, broken ceiling. The breakthrough occurs by a force from above, due to an external force, a force that does not stop. This could be a water leak, a flood. The ceiling broke down, fell down and with it everything that it was hiding over my head - the unspoken and the hidden chaos. It reveals everything I did not see. And brutally, through the force of gravity, everything is poured, all is revealed and offered to the eye. The invisible operational mechanisms are revealed and become visible. It's up to me to see into the chaos and be alert and awake. Making the invisible visible - thanks to the law of physics – is what Break-Through does and shows. It is a 'critical' sculpture, a ‘critical’ corpus. This break that comes from above cannot be avoided, is irresistible. This sculpture, this break, this 'critical' corpus will fall over my head, I cannot save myself from its new logic, its relentless logic. The force majeure has no mercy and forces me to see. I have to raise my head, I have to open my eyes wide and face what I do not want to see. This is the logic, the form and the mission of this sculpture. " (Thomas Hirschhorn 2013)

Thomas Hirschhorn was born in Bern (Switzerland) in 1957. He studied at the Schule für Gestaltung in Zurich. He lives and works in Paris since 1984. This is the third exhibition at the Alfonso Artiaco Gallery, after the previous ones in 2003 and 2006. His works have been exhibited at Jeu de Paume, Paris, 1994; 48th Venice Biennale, 1999; Kunsthaus Zurich, 2001; Documenta 11, Kassel, 2002; 24h Foucault, Palais de Tokyo, Paris, 2004; Centre Culturel Suisse, Paris , 2004; Pinakothek der Moderne, Monaco, 2005; Bonnefantenmuseum, Maastricht, 2005; Weiner Secessionsgebäude, Vienna, 2008. In 2011 he represented the Swiss Pavilion at the 54th Venice Biennale with the installation Crystal of Resistance. He is currently working on the Gramsci Monument, in New York, produced by the Dia Foundation, the fourth and last work of his series of "monuments" dedicated to important writers and thinkers of the twentieth century, which began in 1999 with Spinoza Monument (Amsterdam, Netherlands), followed by Deleuze Monument (Avignon, France) in 2000 and Bataille Monument (Kassel, Germany) in 2002.