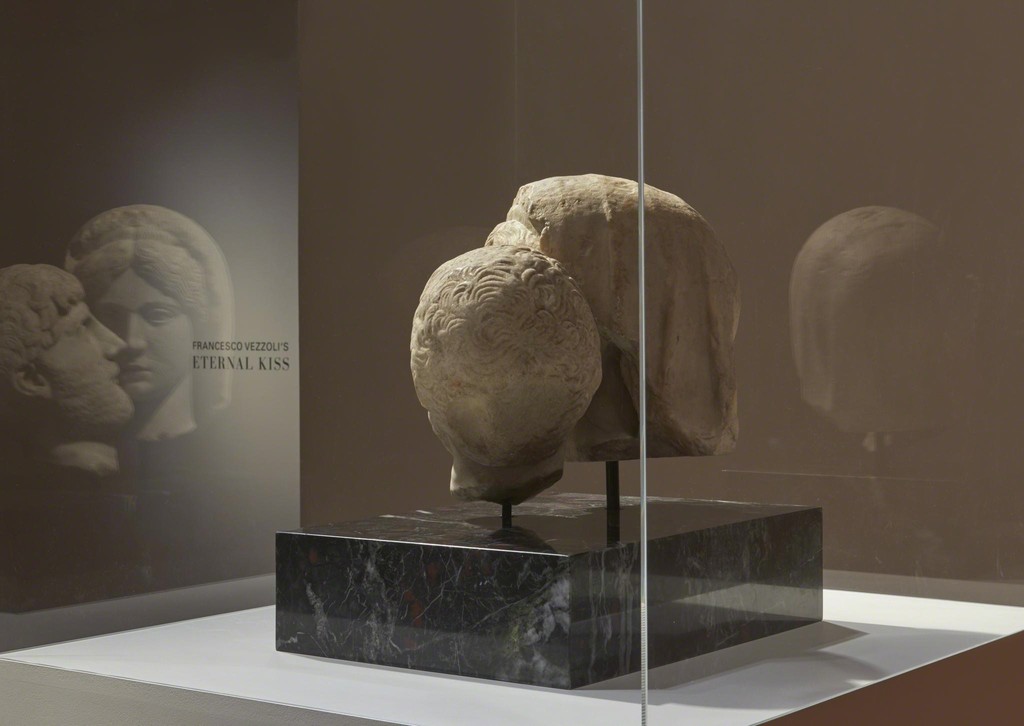 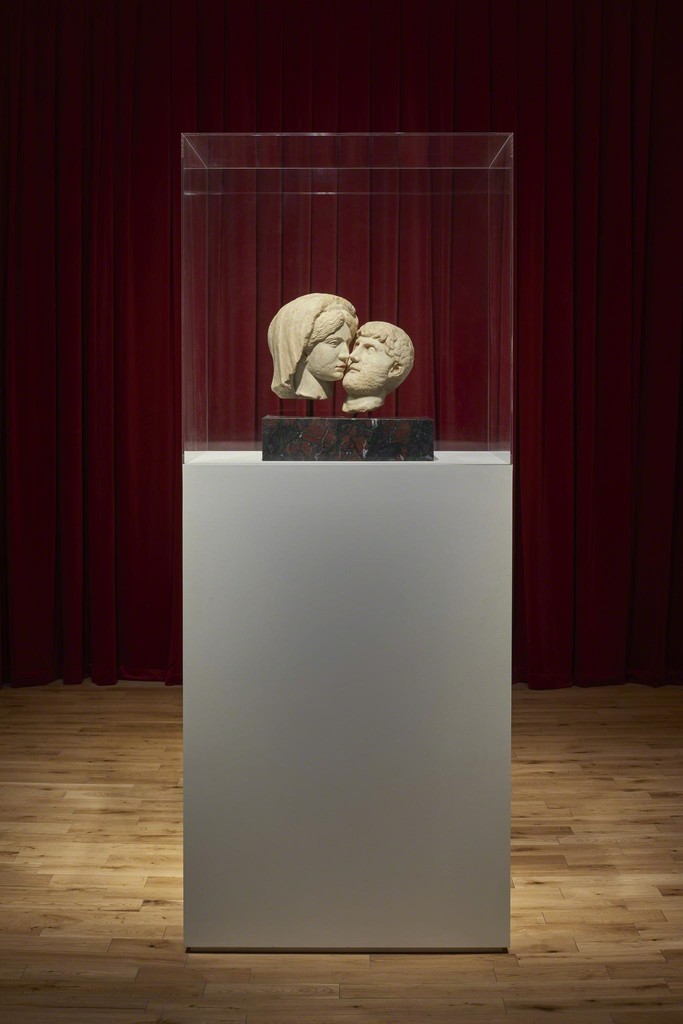 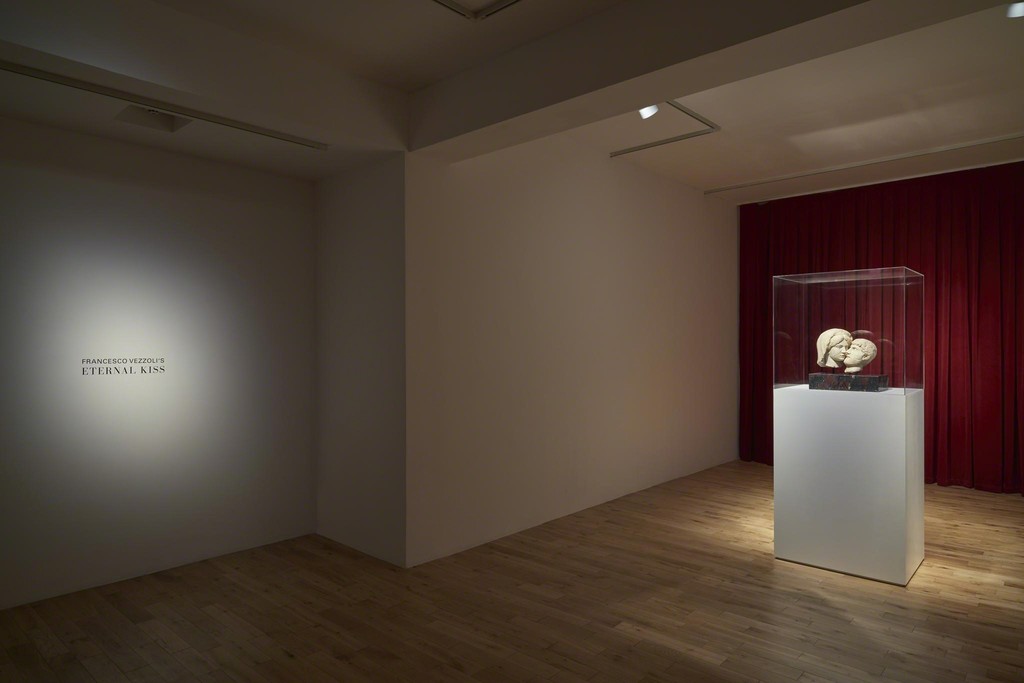 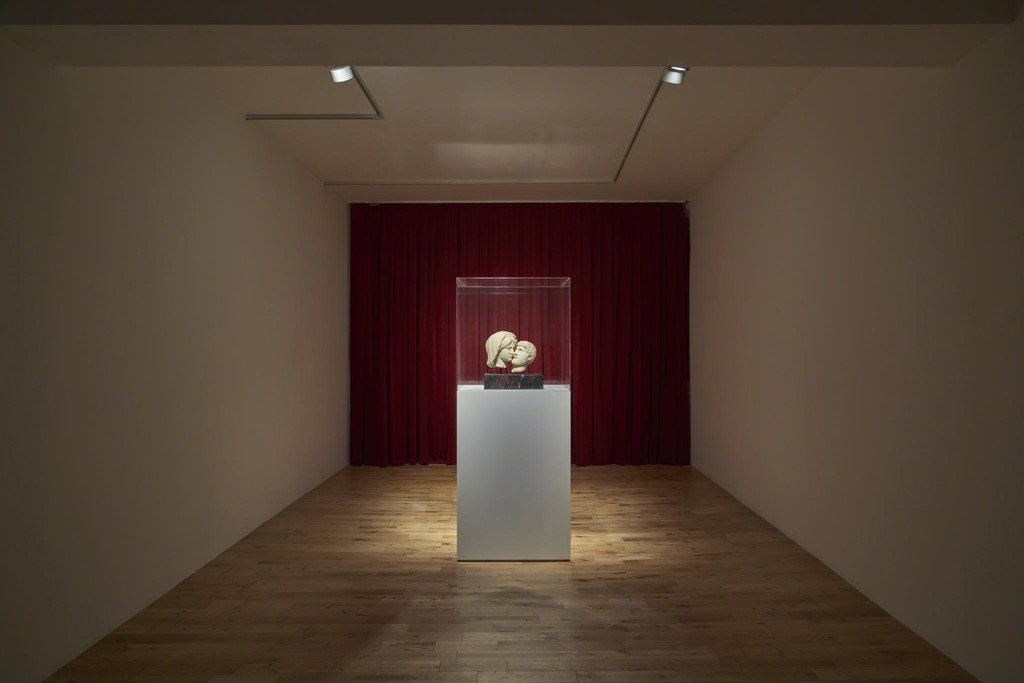 The strategies of aesthetic and conceptual play at work throughout Francesco Vezzoli’s expansive oeuvre are predominantly dedicated to dissecting received notions of beauty. Laced with humour, much of Vezzoli’s work interrogates how and why beauty has been attributed to certain artworks and artifacts at different times. For his new sculpture, ‘Eternal Kiss’, exhibited for the first time at Almine Rech Gallery, Vezzoli acquired two life size marble heads at auction: a Roman portrait of a man (circa the 2nd Century A.D), and a Roman portrait of a woman (Imperial, Hadrianic, circa 117-138 A.D). Both heads have been restored to their original status through a meticulous process of fabrication underpinned by specialist advice from eminent archeologists in the field. In this sense, ‘Eternal Kiss’ further develops the ideas of beauty and the artifact explored in Vezzoli’s ‘Teatro Romano’ presented at PS1 in New York earlier this year.

Vezzoli explains how “the main objective of ‘Eternal Kiss’ is to use the process of aesthetic restoration to reenact a fictional kiss from two thousand years ago.” ‘Eternal Kiss’ has, Vezzoli continues, two main aims: “the first is to restore to the heads the notion that originally they were made to function as objects of desire; the second, and more ambitious, aim of the work is to create the most ancient sculpture of a kiss in existence.”

The fabrication process through which the ‘Eternal Kiss’ has been realized is an unusually aggressive one for such rarified ancient artifacts. Vezzoli elucidates on how he is “acting like a facial surgeon – giving the heads back their beauty by mending broken elements, like noses. A sort of nip and tuck,” says Vezzoli, “allowing the heads to be in sensual dialogue with one another. It is as if I’m preparing them for a selfie,” he says.

By way of contrast to the aesthetic and conceptual play driving the conception and the production of the work, Vezzoli explains how “consulting with specialist archaeologists gives the fabrication process - and consequently the finished work - an edge it would otherwise lack. To paint over and remodel the heads without any sense of historical context would be merely gratuitous.” For Vezzoli, these very different approaches are congruent with their respective professions: “I’m an artist,” he states, “and they are archaeologists: while I’m there to explore certain emotions, they are there to identify and then verify historical facts.” Without this tension ‘Eternal Kiss’ would lack the sense of conceptual precision so crucial to Vezzoli’s work.

Vezzoli’s method of approaching ancient sculptures draws on the way early collectors and curators prioritized aesthetic effect over scientific accuracy: by, for instance, attaching a Renaissance body to an ancient head to recreate a sense of beauty that a mutilated head would not convey. Even a highly respected scholar like Johann Winklemann took this approach as late as the mid-eighteenth century. Vezzoli describes how he “takes for granted the fact that this approach was normal practice a few hundred years ago when museums did not yet have such a hyper protective attitude to the ancient artifacts in their collections.”

For the present exhibition, every detail of the heads and their presentation has been placed under scrutiny. “Because of this attention to the minutia of detail,” says Vezzoli, “the exhibition will focus on the objects themselves. ‘Eternal Kiss’ will become nothing less than the most ancient sculpture of a kiss in existence. It’s as simple – or as complicated – as that,” concludes Vezzoli.