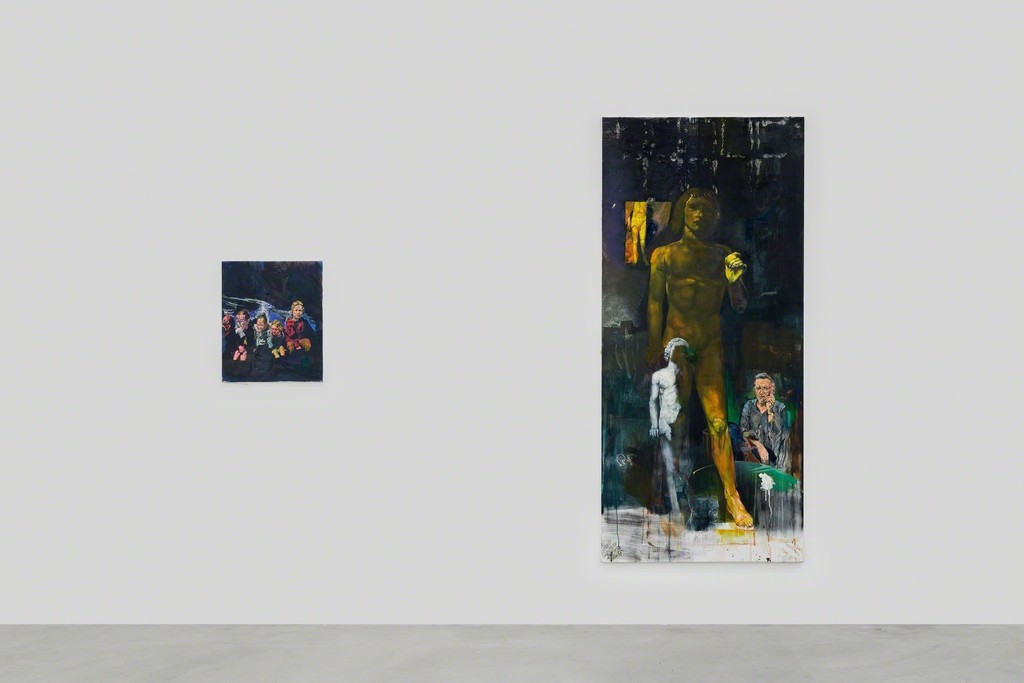 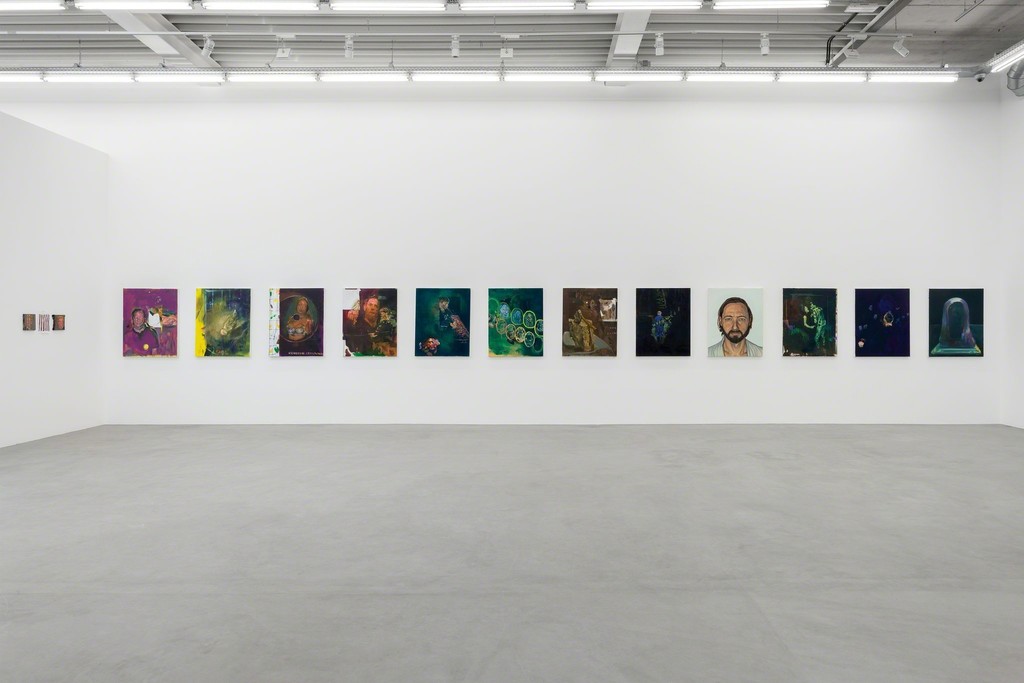 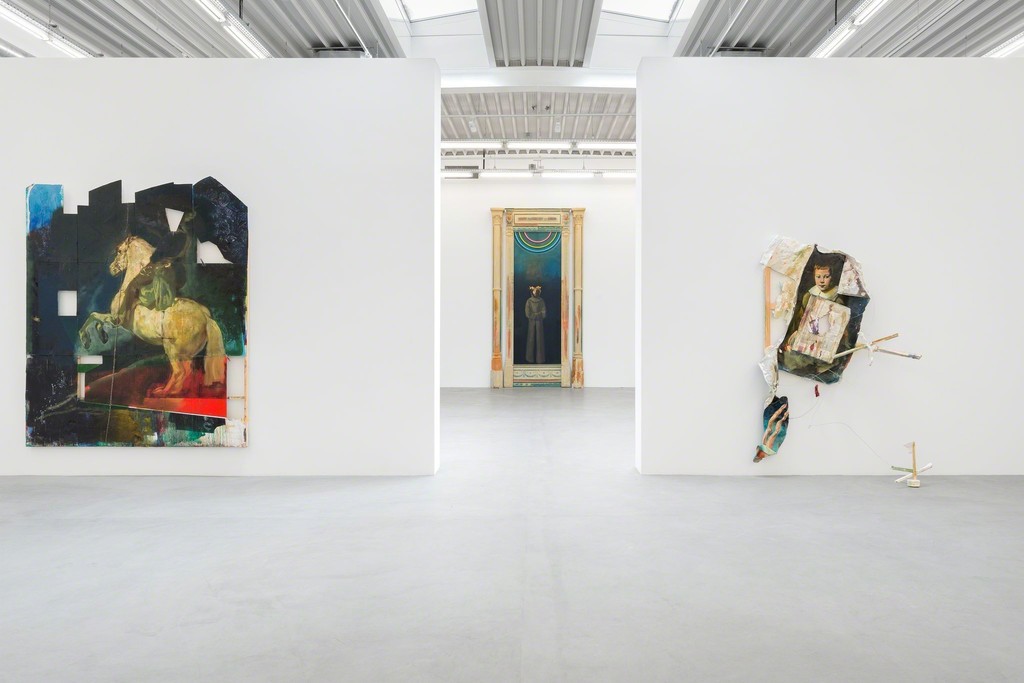 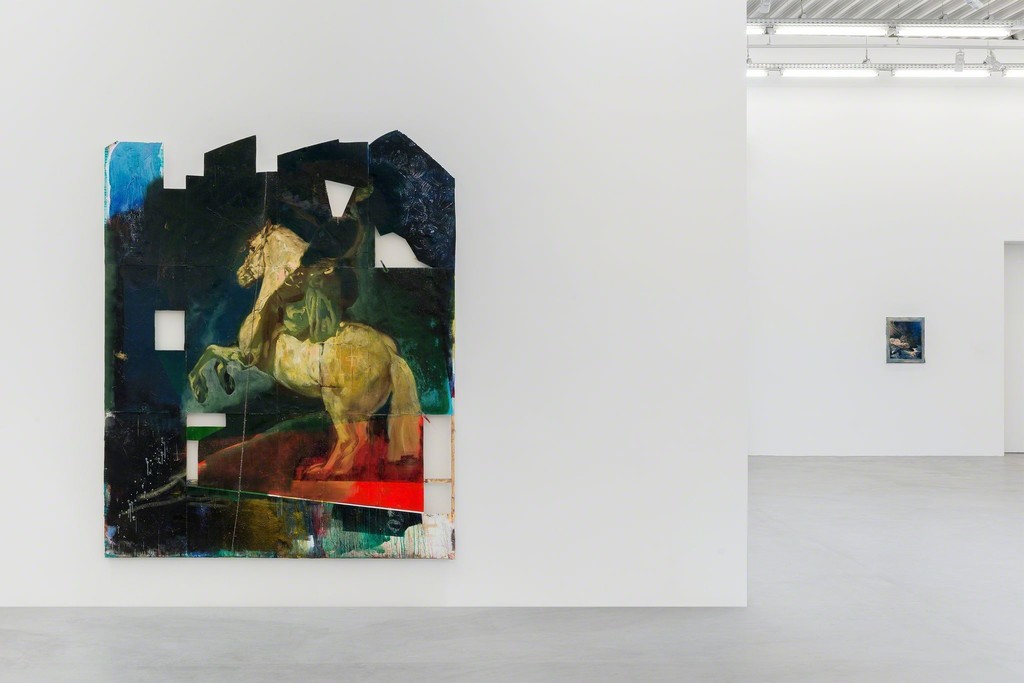 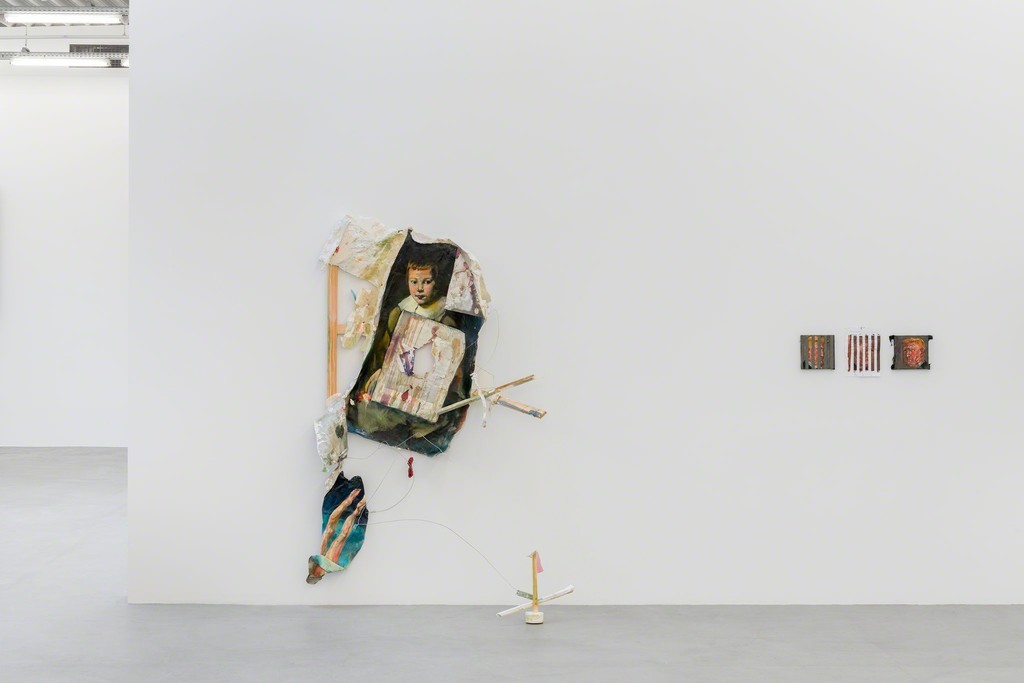 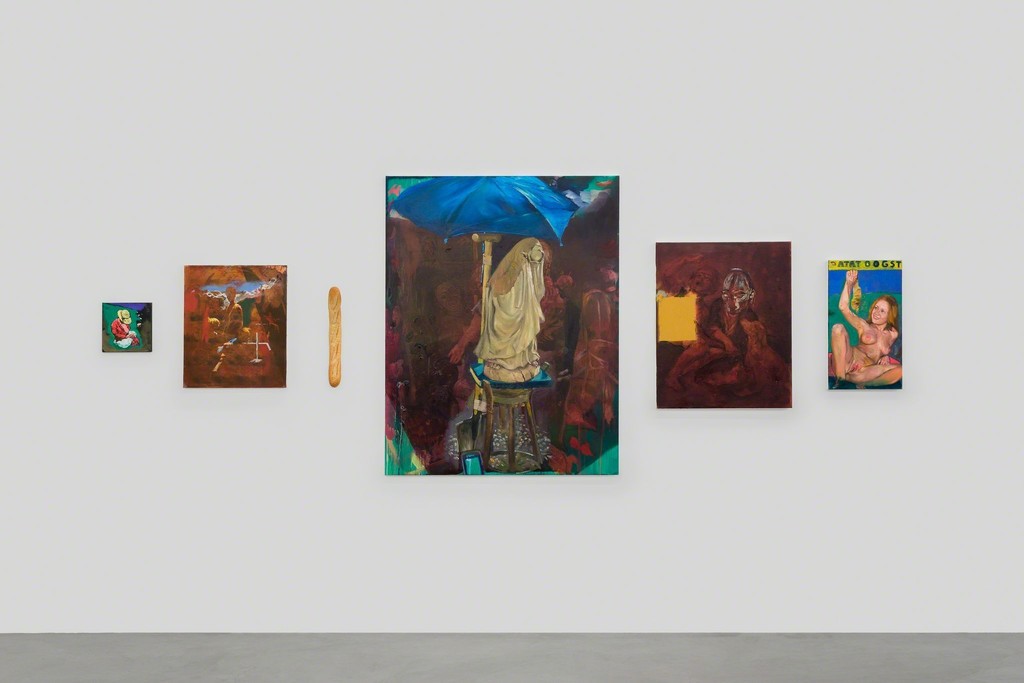 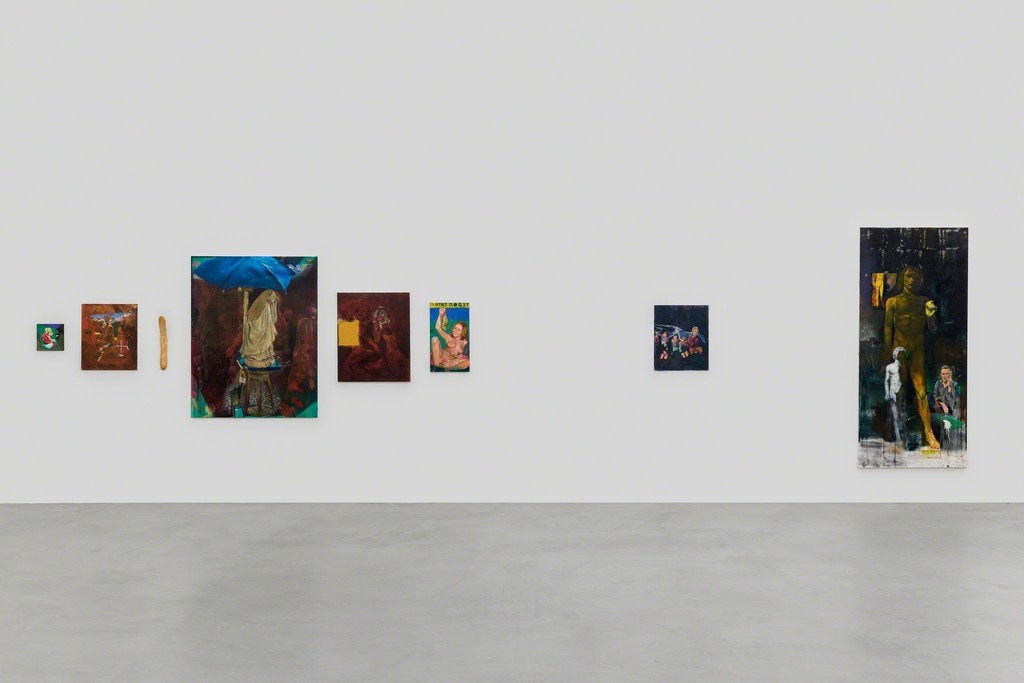 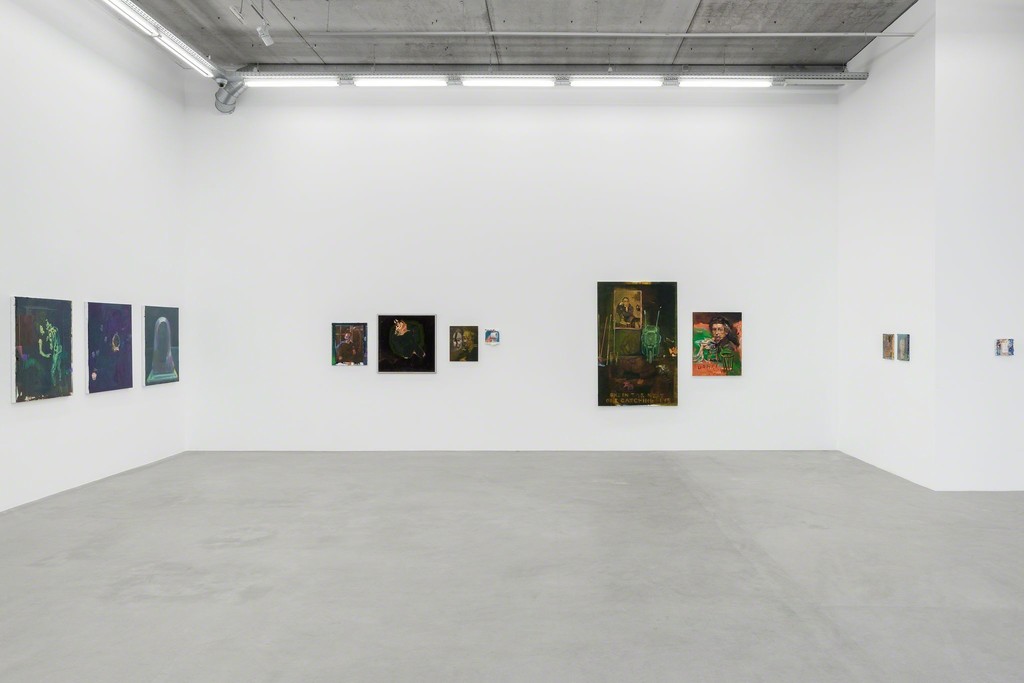 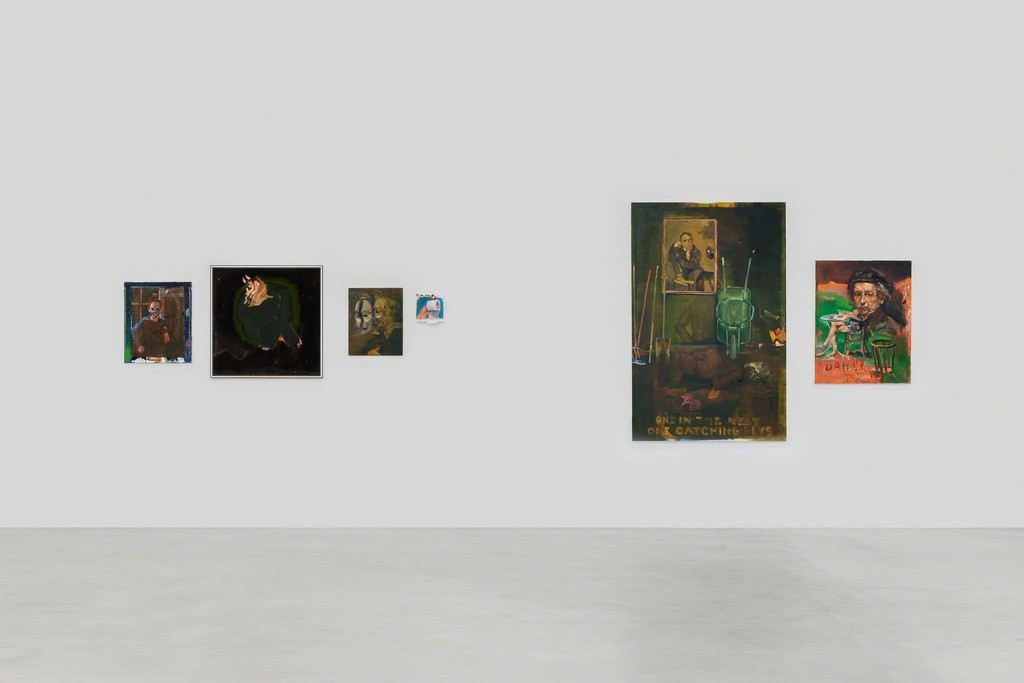 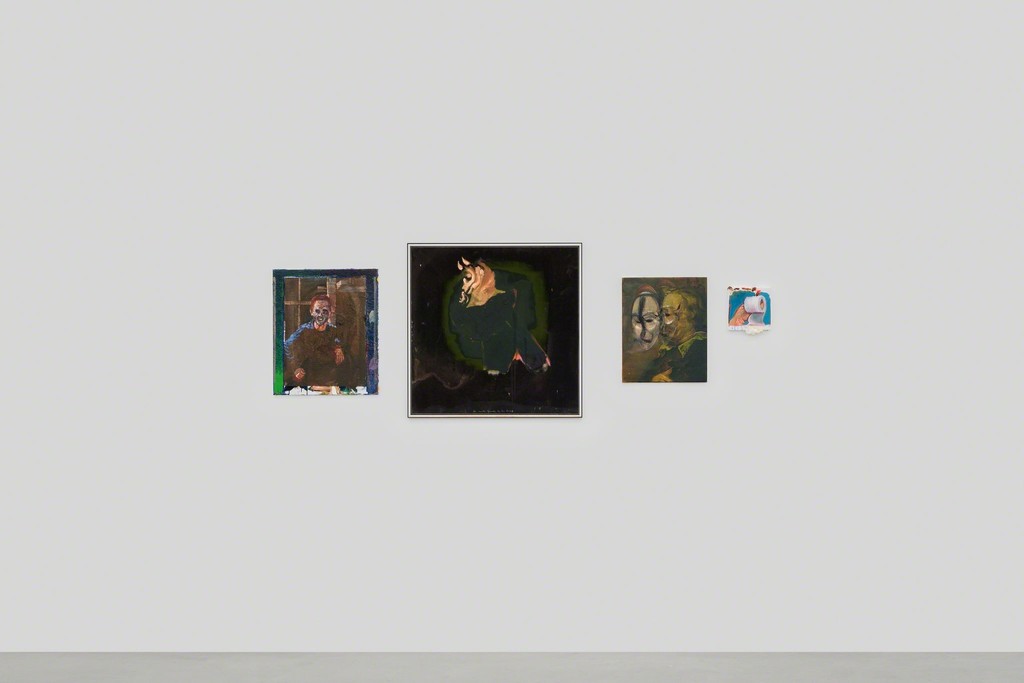 Almine Rech Gallery is pleased to announce the eighth exhibition by Matthieu Ronsse with the gallery, featuring a new body of work.

Just past the ninety-meter climb up the cobblestoned Taaienberg, Matthieu Ronsse occupies a former café that he transformed into a studio and residence over the years. The rooster shrieks and awakens the whole street before dawn, the quarreling neighbors start their usual muttering and the weather gods set the mood. The artist takes a book from the top of the pile and opens it. Almost every day he receives visitors who see his easel standing next to the caravan in the grass and have to determine that the toilet has no door. The small building at the Poesthem in the hilly East-Flemish village of Etikhove is the stage for numerous circumstances, encounters and events that Ronsse gratefully captures in his paintings.

The work of Matthieu Ronsse balances on a tightrope between construction and destruction. He creates the sketchy outlines of an image, then covers it all, or at least part of it; he tears it open, repaints it or completely destroys it, then ruminates on it and eventually rediscovers it in light of new connections. Layer upon layer he tackles the canvas with oil paint, which gradually forms a crust, a solidified eruption of details, fragments and ideas. The characters that appear in his work are always portraits of people from the social network of the artist himself. The portraits each have their own dynamics and typical physical traits; the figures are sometimes depicted with accompanying attributes and are placed in an indefinite but always intriguing architectural or scenic context.

Ronsse is not involved in conscious formal or conceptual conventions within his own oeuvre, although the age-old tradition of painting is always subcutaneously present. It is like a kind of Trojan horse that, although it has assumed immense proportions, manages to move silently inside the city walls. The art-historical references function more as random motifs in his work than as deliberate formalistic quotations: Rembrandt’s heads emerging from the dark, the series of impressions of the Mont Sainte-Victoire by Cézanne, the fleshy nudes of Freud, the monumental horses of Velázquez—Ronsse tries them out, he tastes and mixes them in “Naples yellow” or "homeless brown".

The paintings are the product of the process-oriented, explicitly physical action of painting itself. The canvases are not always stretched on a frame, but are often nailed to the wall as loose pieces or—in combination with all kinds of objects—they form an installation that occupies the entire exhibition space. The eclectic, heated cacophony that arises is a complex play of layers and associations, and reaches full maturity in a total installation, usually conceived in situ, in which echoes of the artist's studio are distinctly tangible.

In this exhibition, Ronsse again combines several storylines from his intimate atmosphere with objects he finds and collects, stories that he hears or reads—situations, people and things that he encounters in a rather banal way. The works originate in series, in a free, intuitive manner, almost like a tombola. They form the shackles of this temporary, nomadic studio inside the gallery space. It is a snapshot of the ever-growing and mutating oeuvre of Ronsse, who tempts the viewer to enter his universe, a world fueled by the collective subconscious.

As if the Olympian gods were involved, things reveal themselves here as an absurdist chain of randomness, coincidence and chance. It is a game of all or nothing: the croupier throws the dice that dance around each other and roll until they hold still and unintentionally determine the outcome. Rien ne va plus. It is like the day-to-day running of a casino: year after year people arrive full of hope, but soon have to leave again in total disillusionment. One day Ronsse’s painting is the portrait of a friend, the next day it is that of the blind chicken from the garden that still lays eggs.