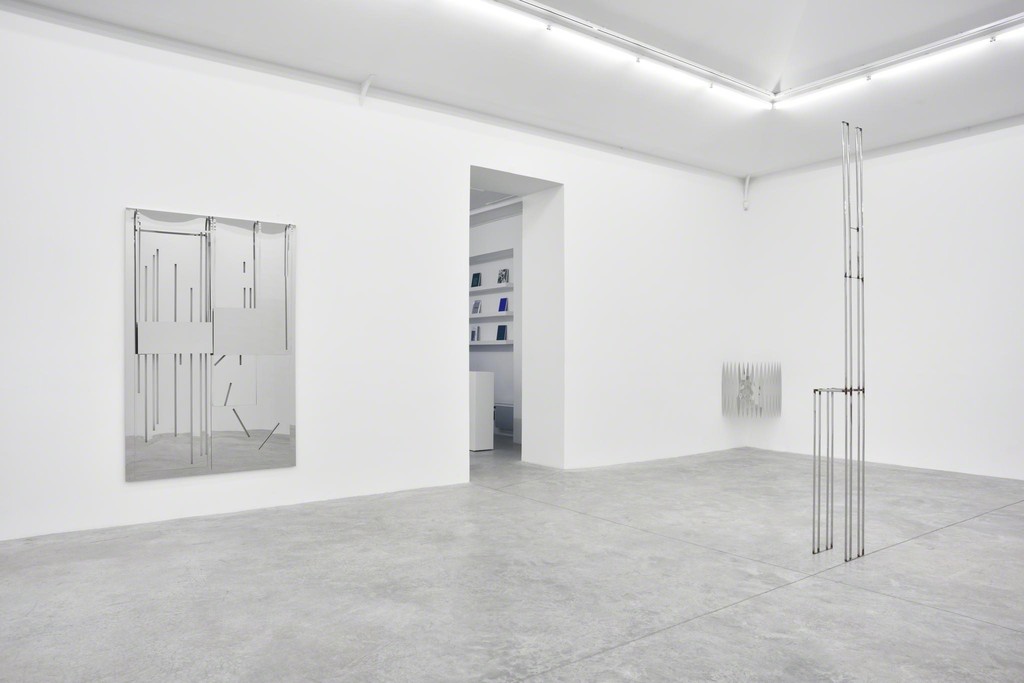 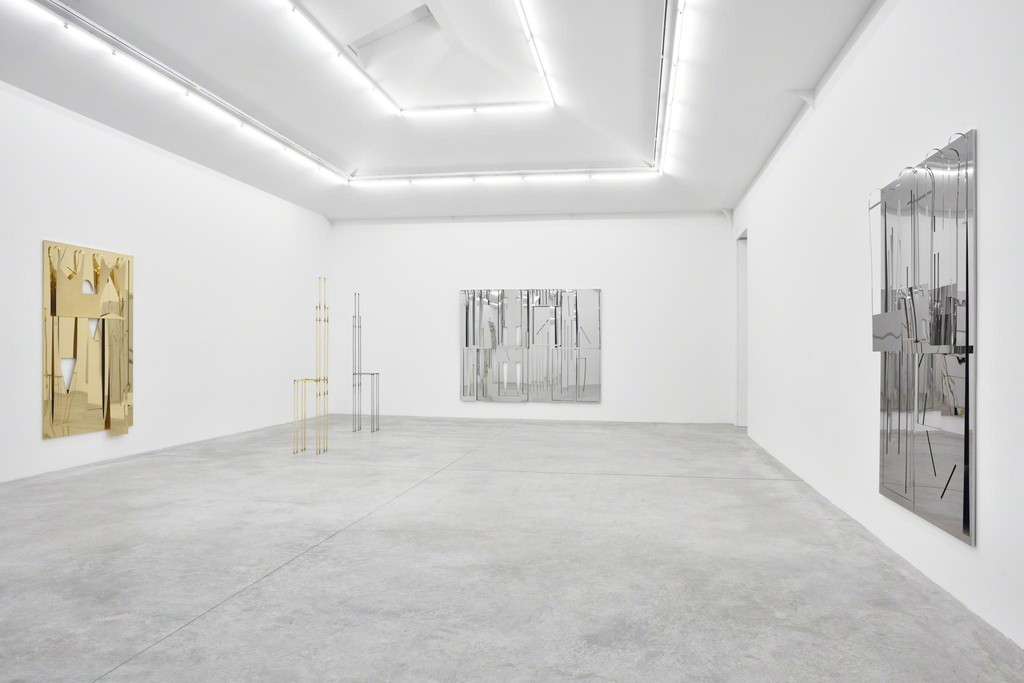 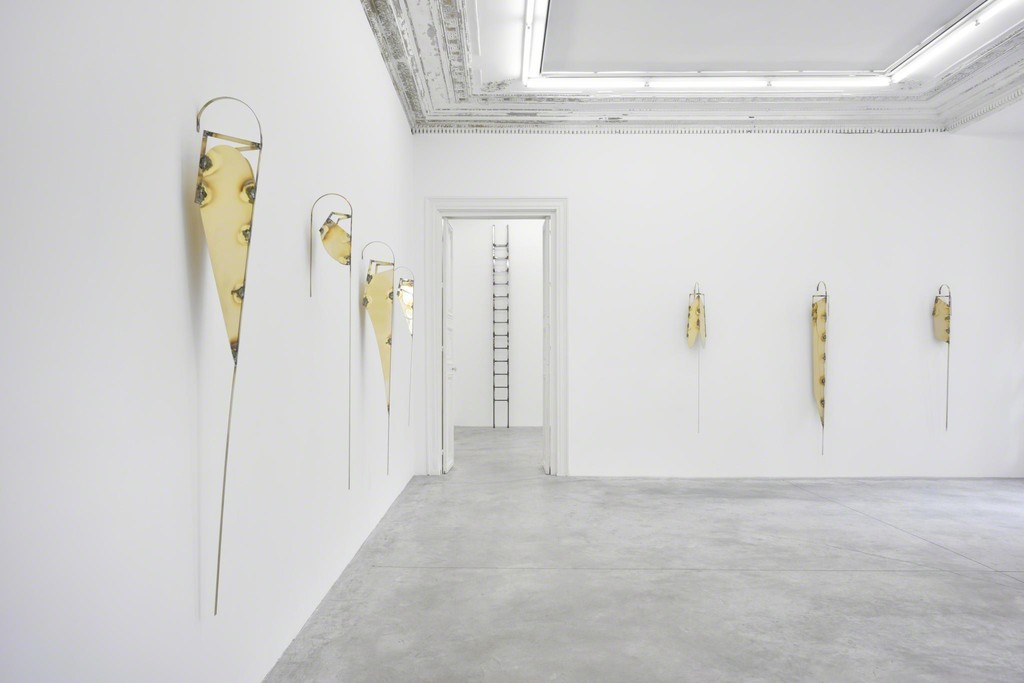 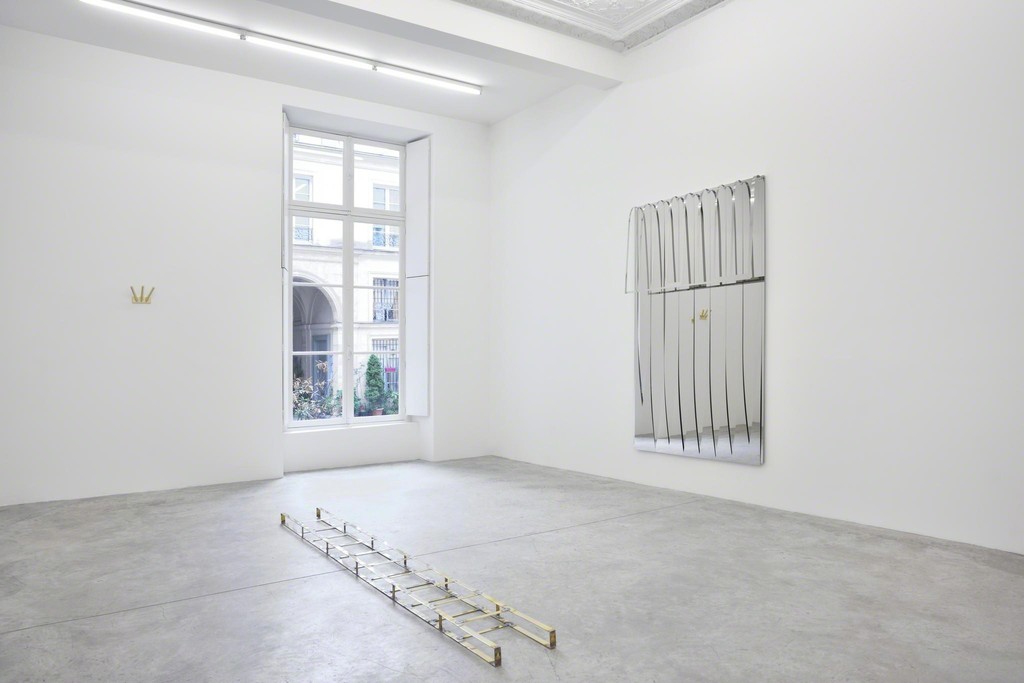 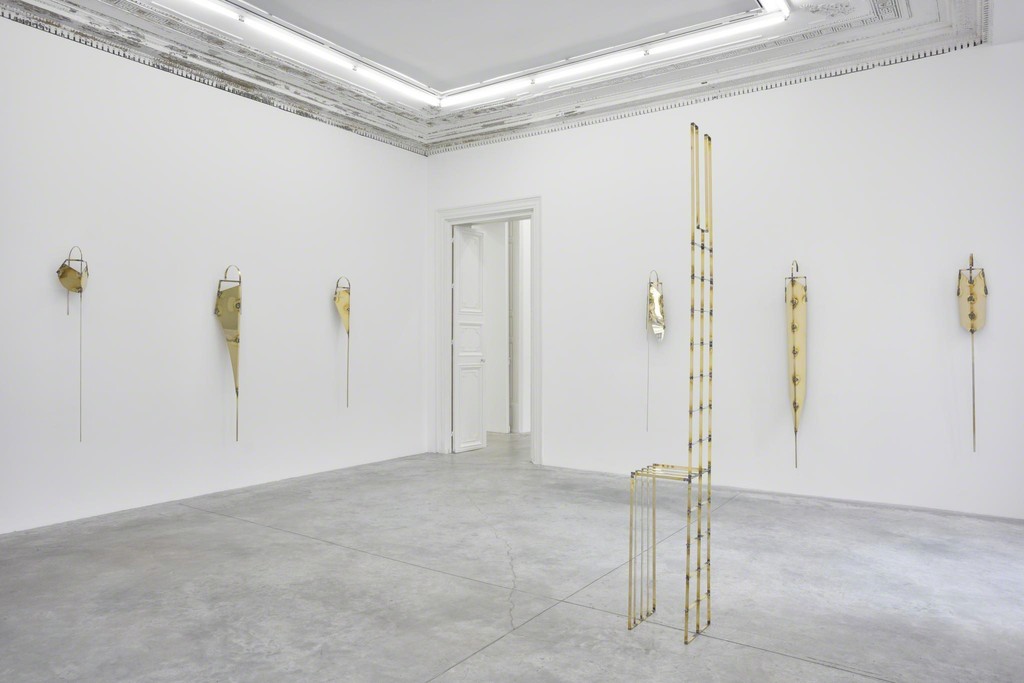 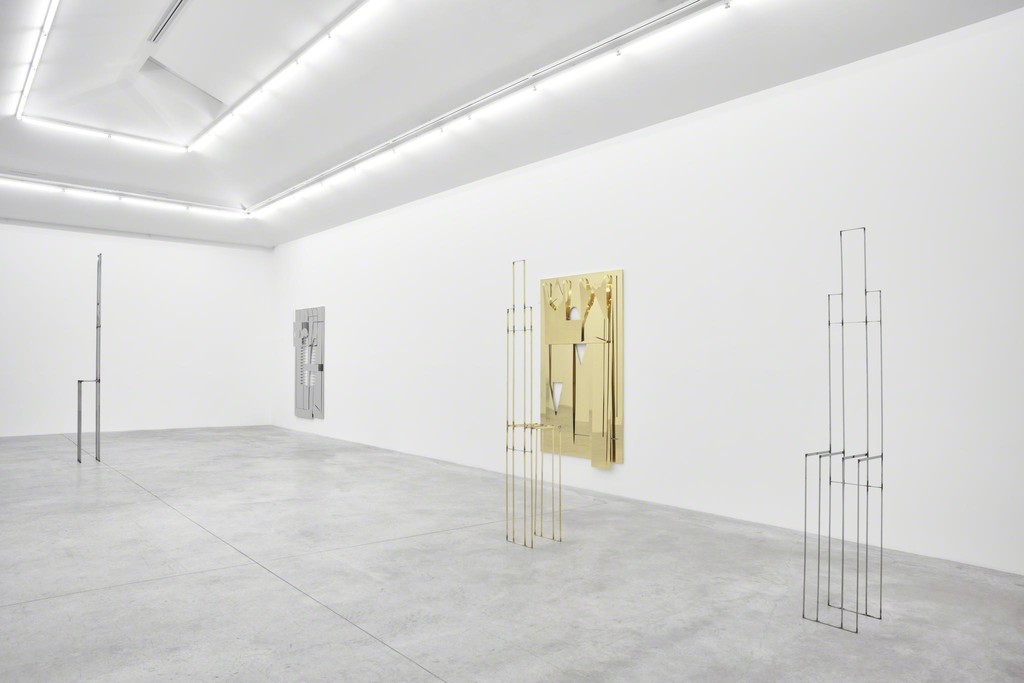 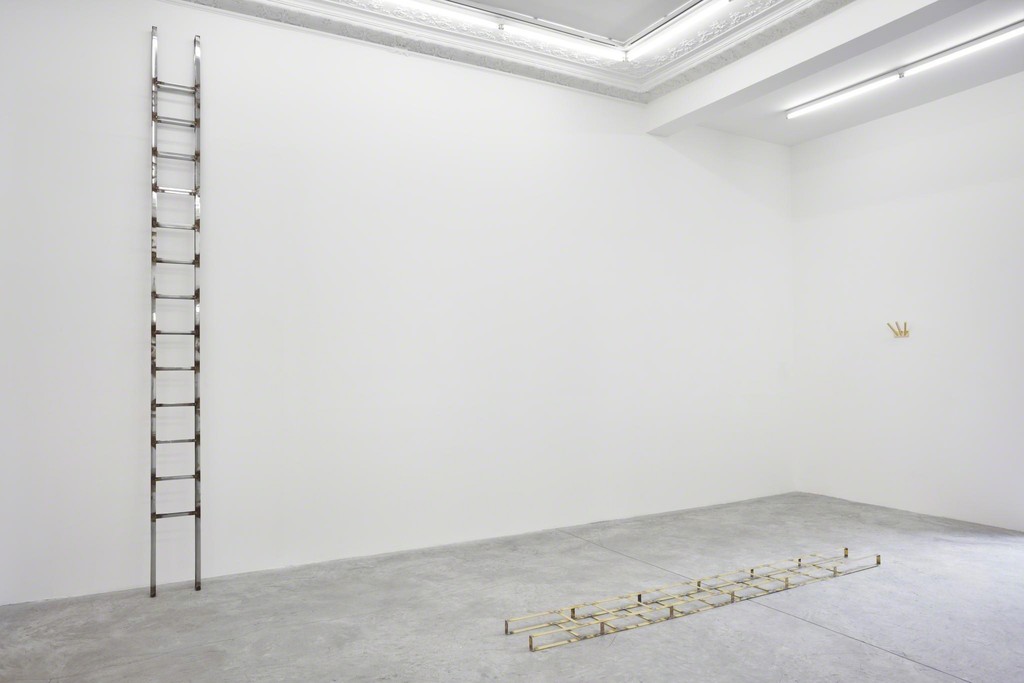 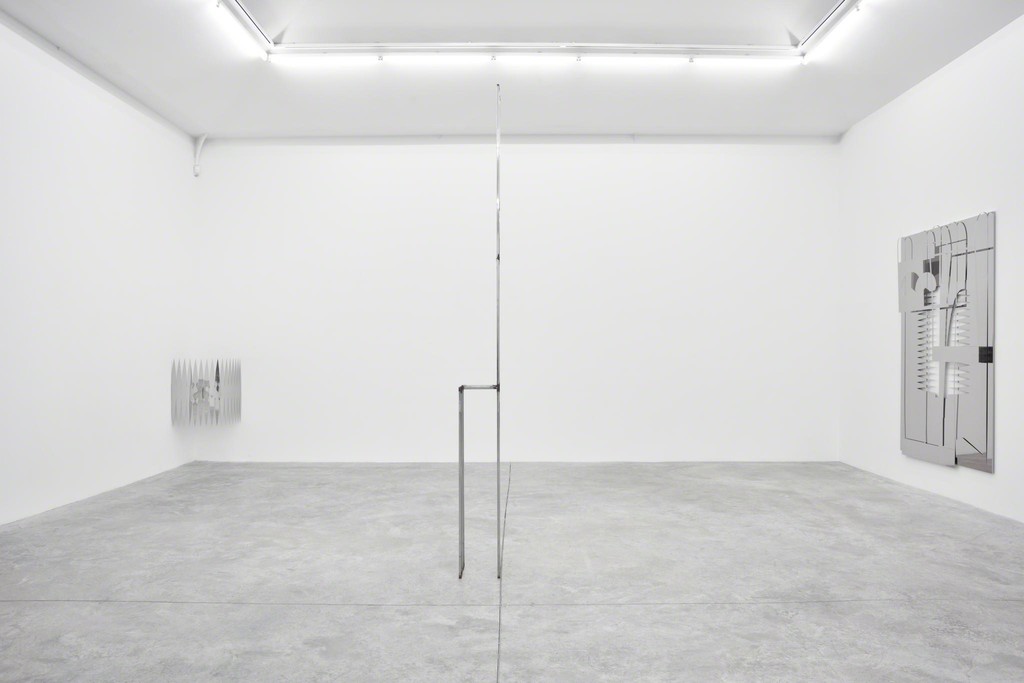 In Tarik Kiswanson’s works, the body is never a full mass or a material reliant on itself. On the contrary, it is a structure, in the proper sense of the term, primarily ephemeral and immaterial, where the space in between plays a major dynamic role.
These metal surfaces, carefully crafted by the artist, impose on the viewer a presence that is both ungraspable and threatening due to their hard edges and angles, their slender tips, and their multiple reflections.
The oxidized soldering stains take on a pictorial dimension as they splatter all the colors of the spectrum here and there, across the shiny, highly-polished surfaces. Reduced to its frame lines, to its bare bones, a dysfunctional and skeletal furnishing is deliberately stripped of its function as a showcase or as a storage. The artist places it on the floor or hangs it on a wall, sometimes close to some fascinating blind masks (or the negative forms left of their components) hung on the wall like reliefs, and reminiscent of Naum Gabo and Anton Pevsner’s experiments in African art.
Another remarkable aspect, these paradoxical objects are highly responsive to their spatial environment and also to their observer’s proximity. Subtly balanced, they put into play the fascinating elasticity of metal as they vibrate with the contact of a hand or with the displacement of air. Over and beyond their constant historical and cultural resonance, forged in their author’s dual Scandinavian and Arab roots, these works seem to stir our need as spectators weary of packaged and spluttering virtual images to react physically to the work.

Tarik Kiswanson, a Swedish artist of Palestinian origin, born and raised in Sweden, presents a “cosmology” of new works.
Oscillating between East and West, the artist’s work is based on principles of superposition of different cultural horizons and aesthetic contingencies. He also displaces the limit between art and design, and uses biographical elements to create what he calls “ambiguous objects.
Some of the works rise up as characters within the gallery and spread out across the gallery’s three rooms. A recurrent pattern in the artist’s work, of brass or steel welded “sharp” sculptures, incarnates a multitude of silhouettes with anthropomorphic proportions. Part cages and part skeleton, these figures appear both rigid and flexible. Their obvious aggressiveness contrasts with the physical precariousness of their composition – this ambivalence underlines their vulnerability.
The body becomes materialized by its evident absence and though the works are motionless, they have a kinetic potential which can be perceived as metaphors of the instability of our society and of its modes of representation. Fluttering artworks are generated by the public’s movement within the gallery while the various shapes accentuate the exhibition space, forming numerous similarities.
On the gallery’s walls, metallic sculptures emerge from a formal hybridization between masks of European knights and metal nigabs worn by women in the Arabic peninsula until the early 19th Century. The spot welding left visible on these masks – the artist’s real signature – magnify the gulf between those two entangled references while displaying the soldered stratum. Alloy flagstaffs are converted into post-minimalistic sculptures deprived of any practical purpose. Similarly, fencelike structures prevent the visitors from strolling around, finding within the exhibition a new dimension of sophistication, and of added value.