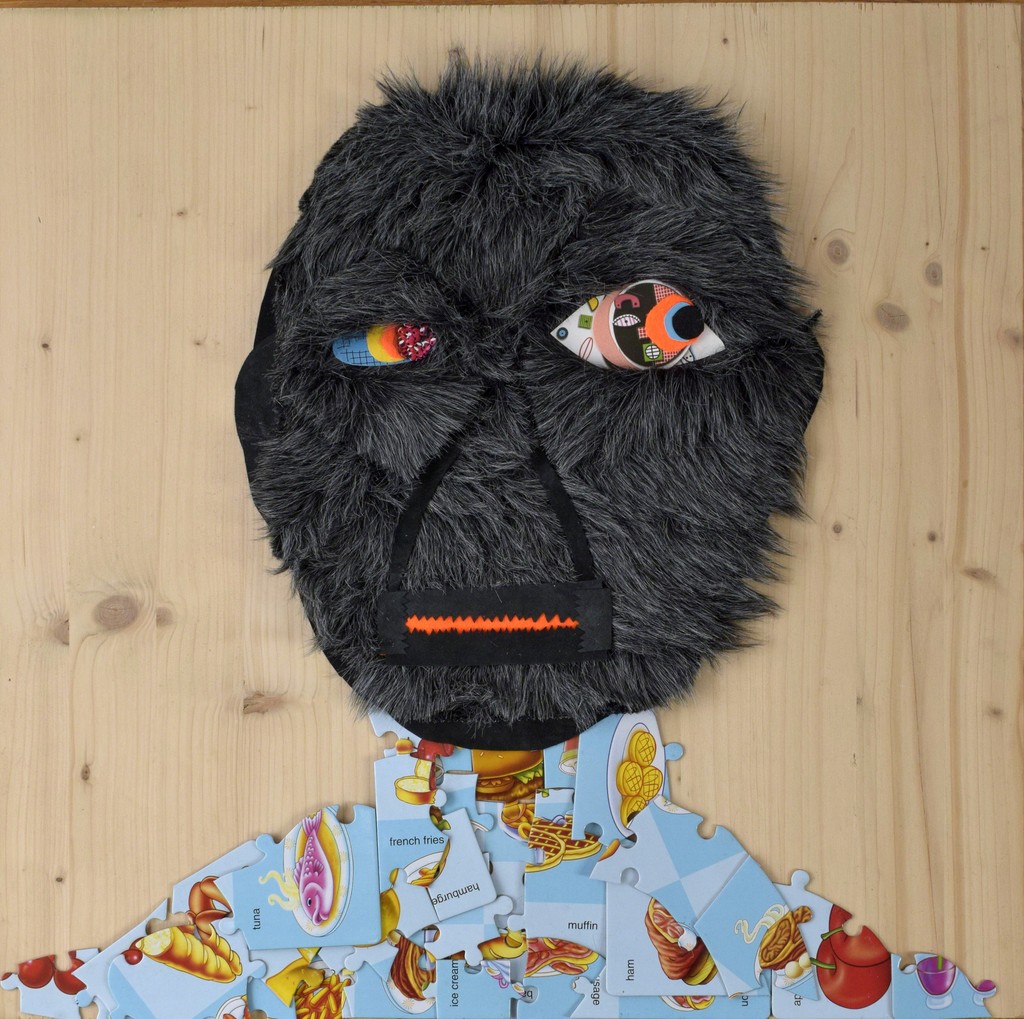 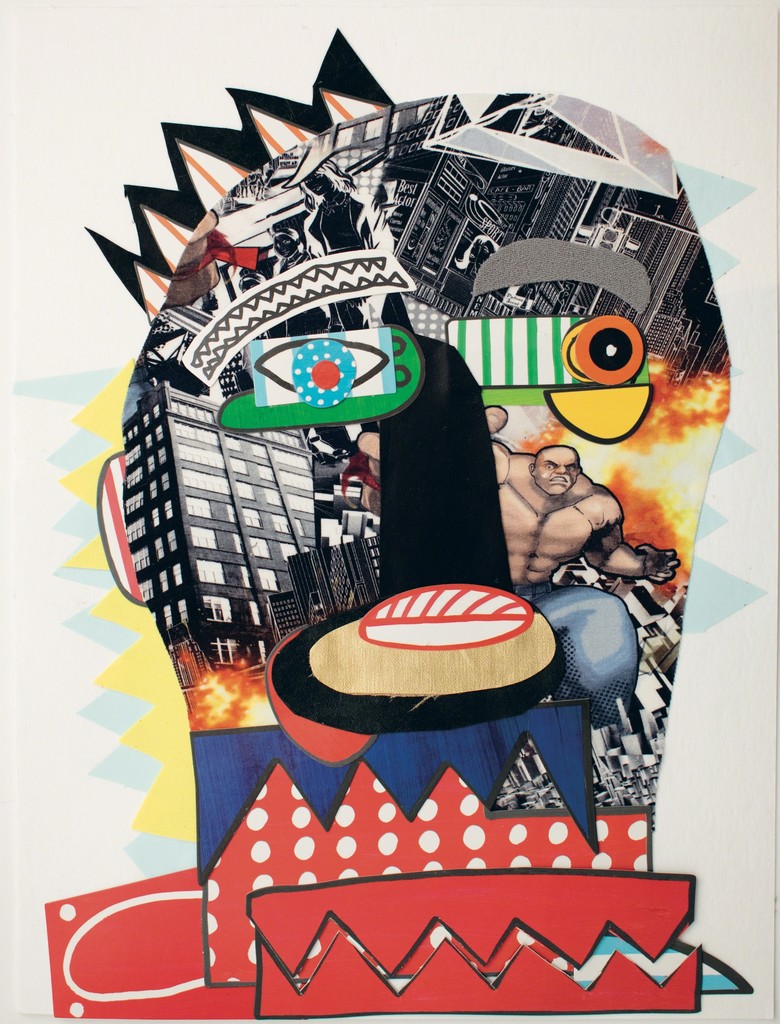 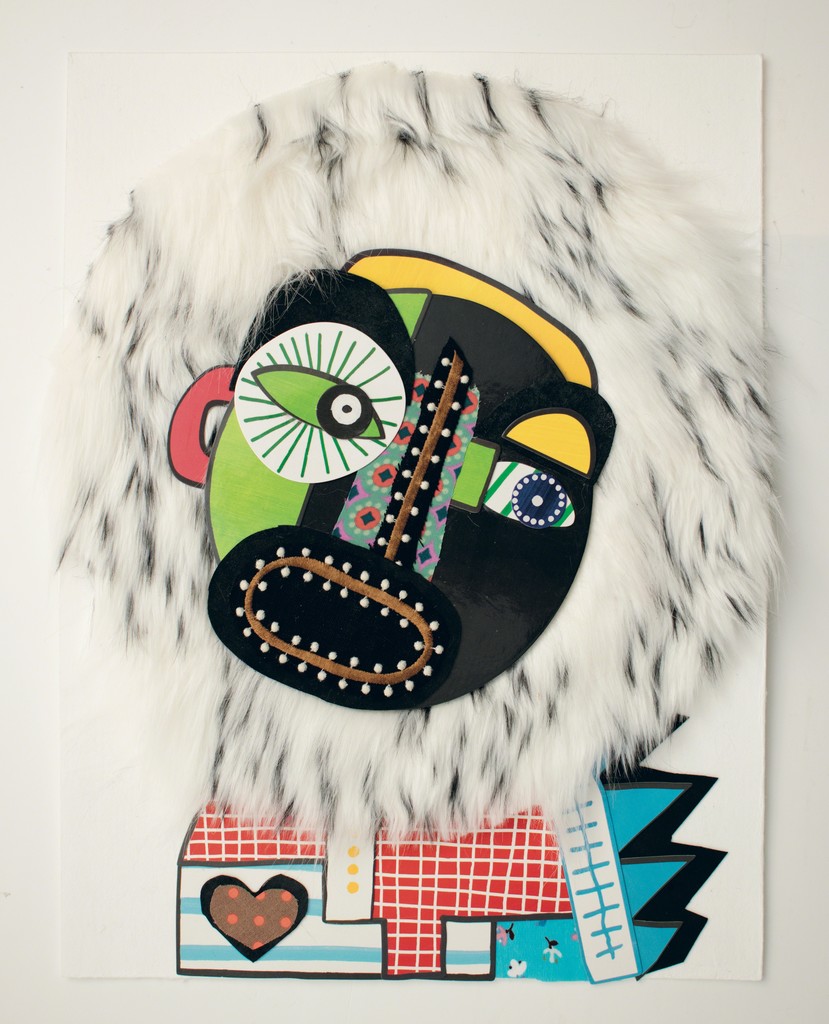 The artist Raluca Arnăutu (* 1977, Bucharest) works mostly in small format with different materials on paper. Her collages are composed of various colorful pieces of fabric and drawings. For the series "Deconstruction", the artist used a black wide pencil to draw the contours of the pieces of fabric, which in their arrangement form the face of a figure. Powerful colors seize the viewer, while the numerous individual pieces of the collages overlap each other to relate to their own place within the composition. The face, which is composed of these cubist combinations of fabric and painted paper applications, presents itself to the viewer in frontal view, while wearing a horrified facial expression. With their colorful exterior, which resembles many ornaments, and the abstract forms of their individual elements, they are reminiscent of the mask images of African tribes of peoples who served as models for the Cubists. The pieces of fabric, some of which are made of faux fur, support this impression. Nevertheless, the figures also have something modern, the thick edges of the abstracted parts of the figures and the colorful, partly monochrome colors are reminiscent of the appearance of comic figures, similar to the figures of the screen prints of Andy Warhol. Basically, however, they are considerably more abstract than comic figures. The individual parts of the figures are almost architecturally composed and have little perspective depth. Their abstract noses, eyes and mouths rest on the round or oval heads and consist of abstract curved lines or other shapes without similarity. The selection of these forms, as well as the outlines of the collaged parts, continue seamlessly in the patterns of the printed fabrics. The colorful exciting game stands out strongly from the blank paper of the left behind. The titles of the individual collages, such as "Gilty Bert (Gilbert)," "Say O'Harrah (Sarah)," or "Stay the Row, Bert (Robert)“, allude to names of individuals while containing a tonal resemblance. In addition, they give the figures, which look like anonymous illustrations, an identity. Their initially funny appearance also gets a bit melancholic in this way, as they now seem to be missing something. It gives the impression that they lack a balance of identity and that they almost fall apart. The characters therefore have not only something contradictory, but also cynical and thus a certain resemblance to a harlequin, who laughs on one side of his face and cries on the other. In the representations of the figures, this is not recognizable by a symmetrical separation, but rather by the contradiction of the colorful colors with their angry or sad facial expressions.