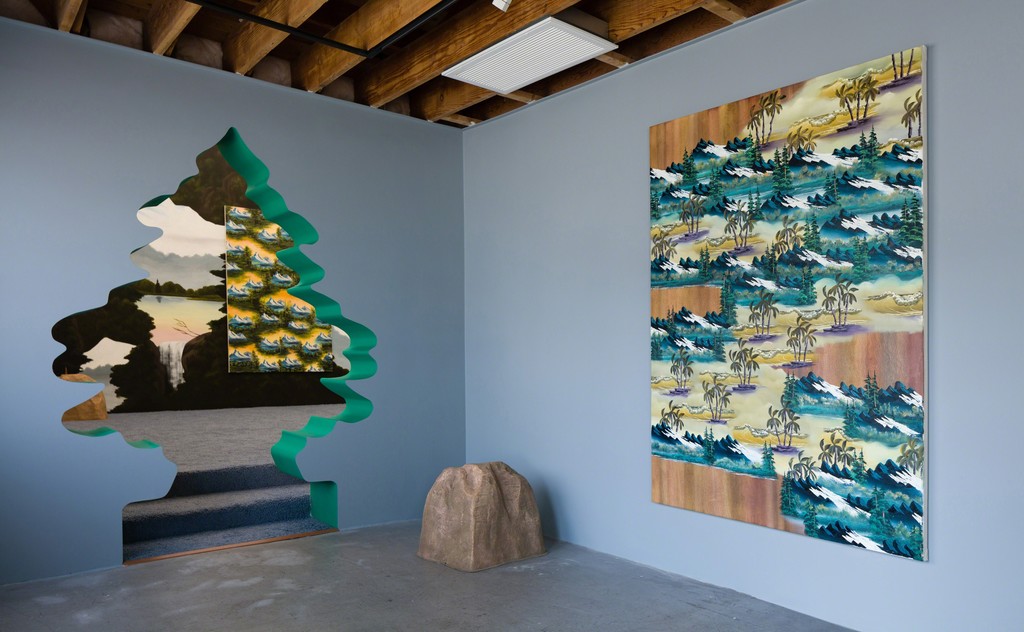 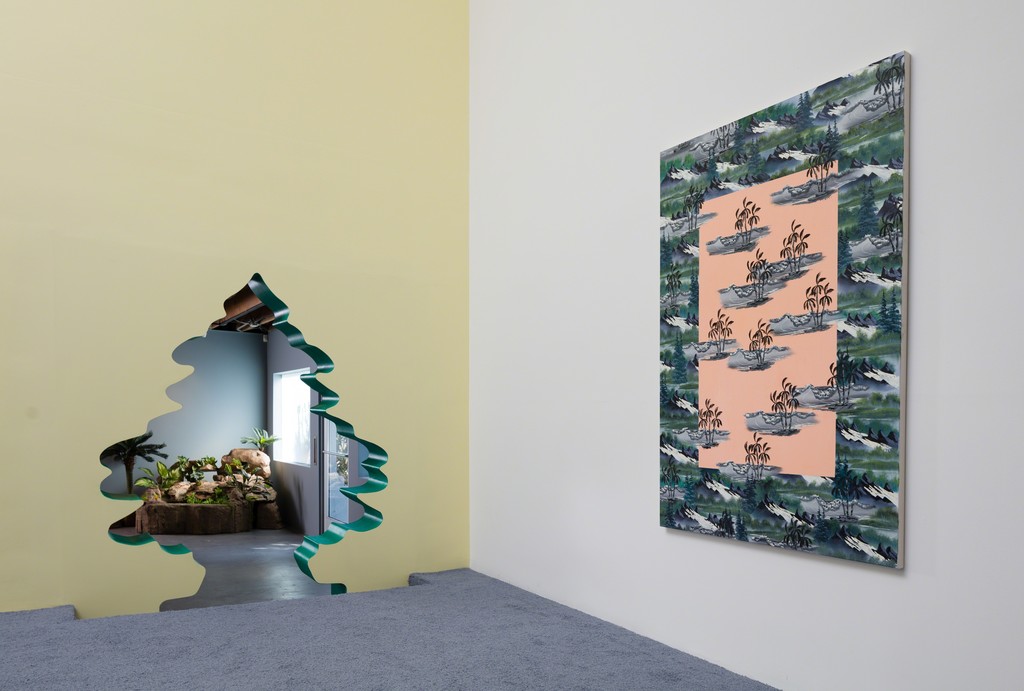 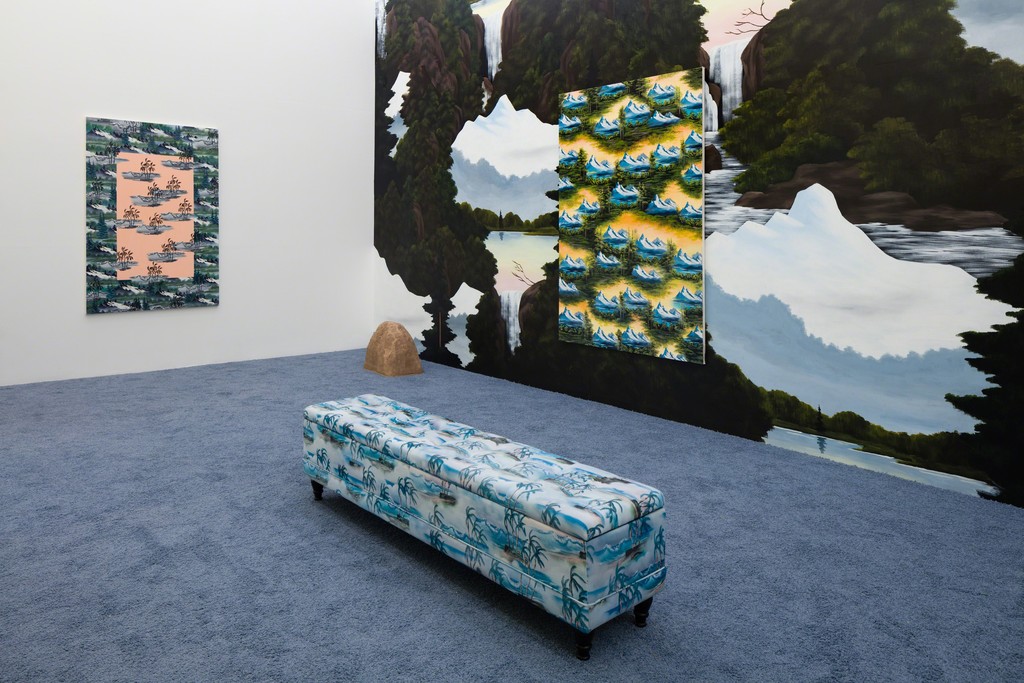 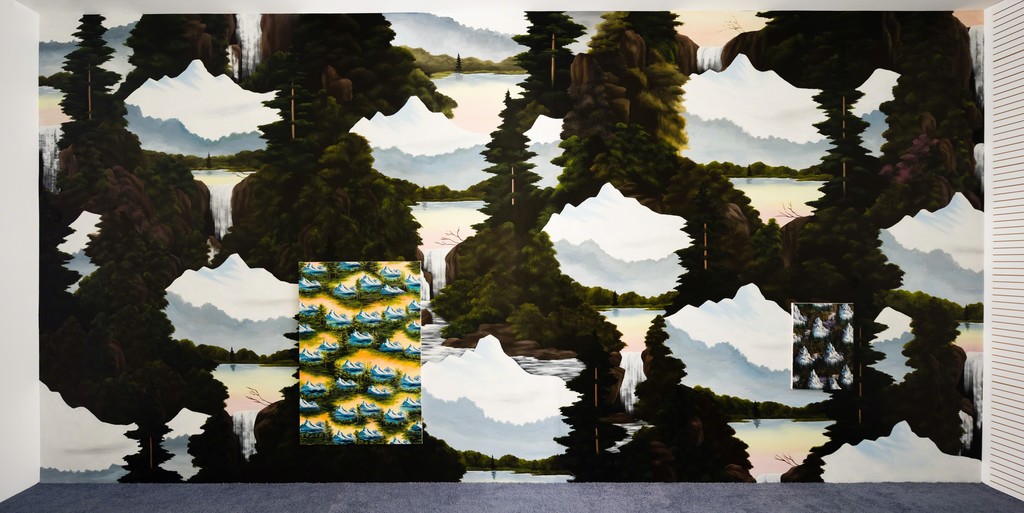 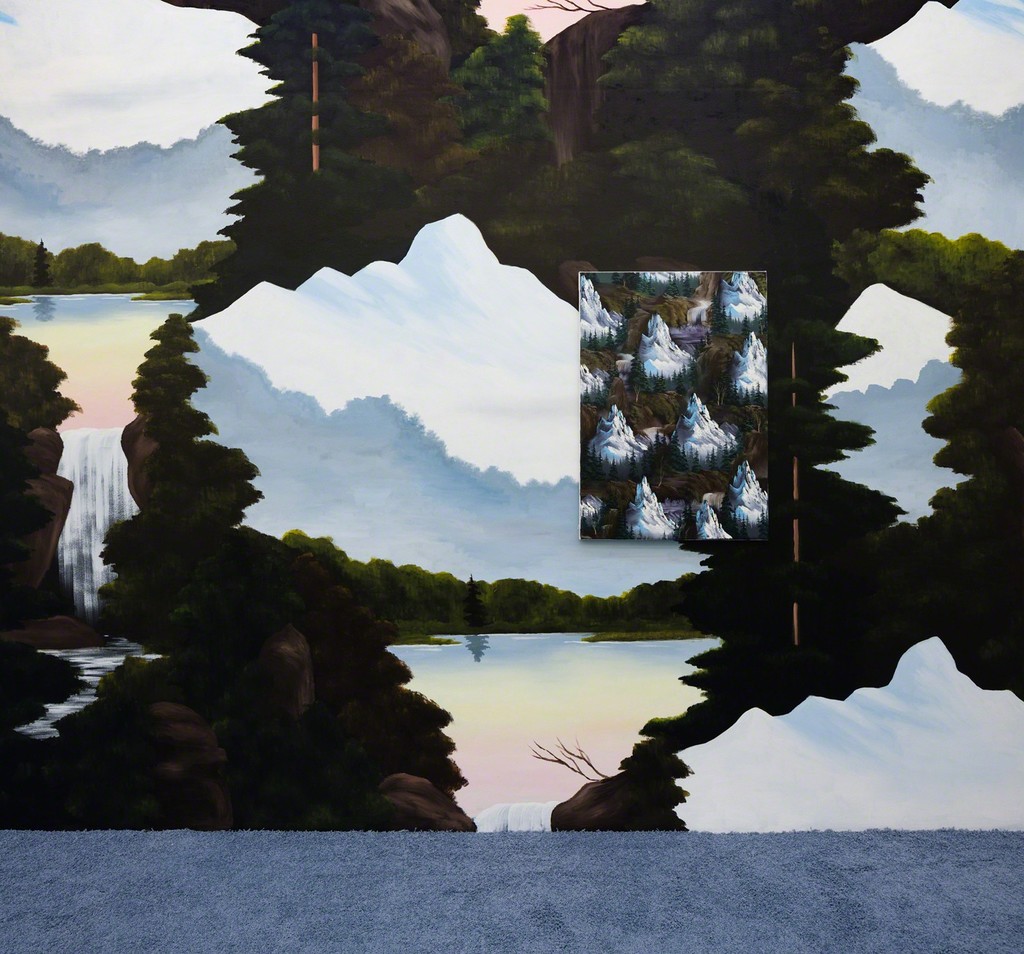 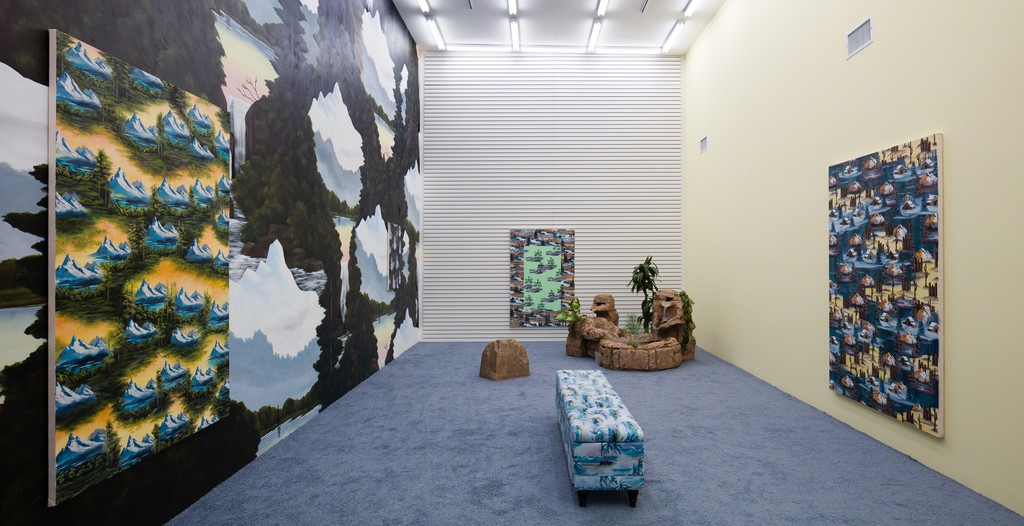 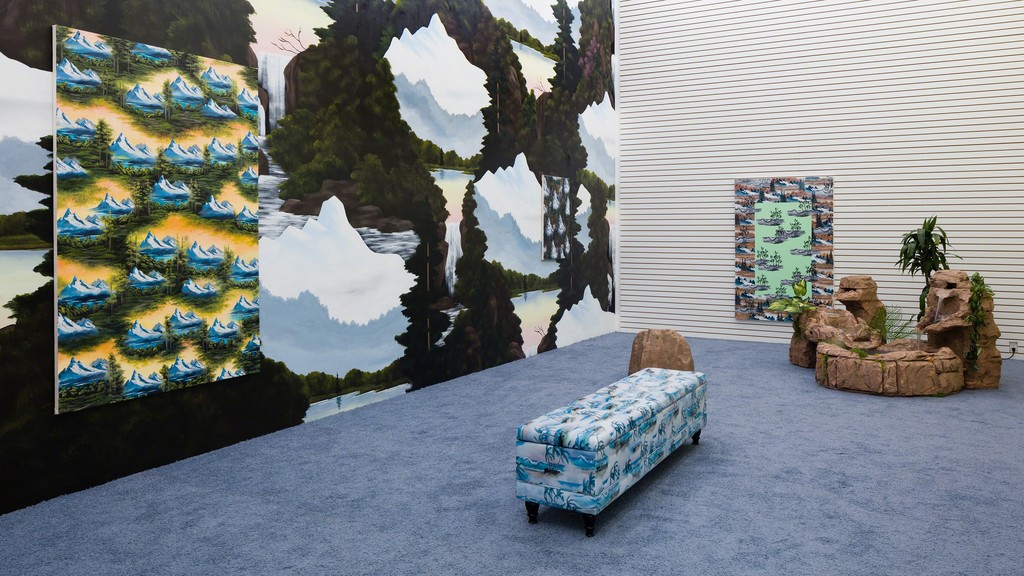 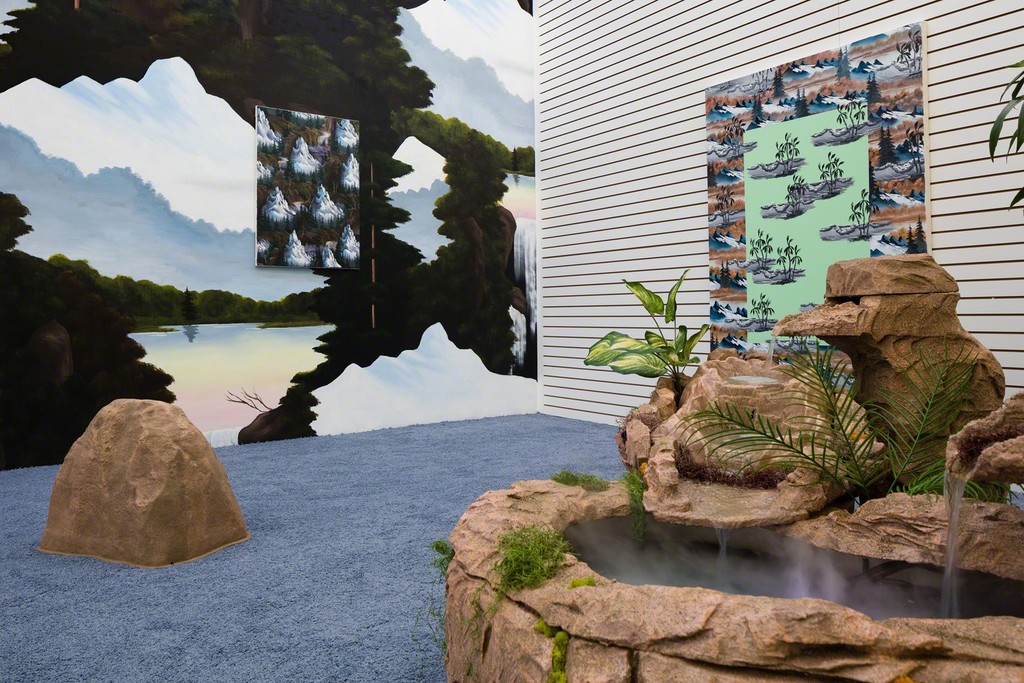 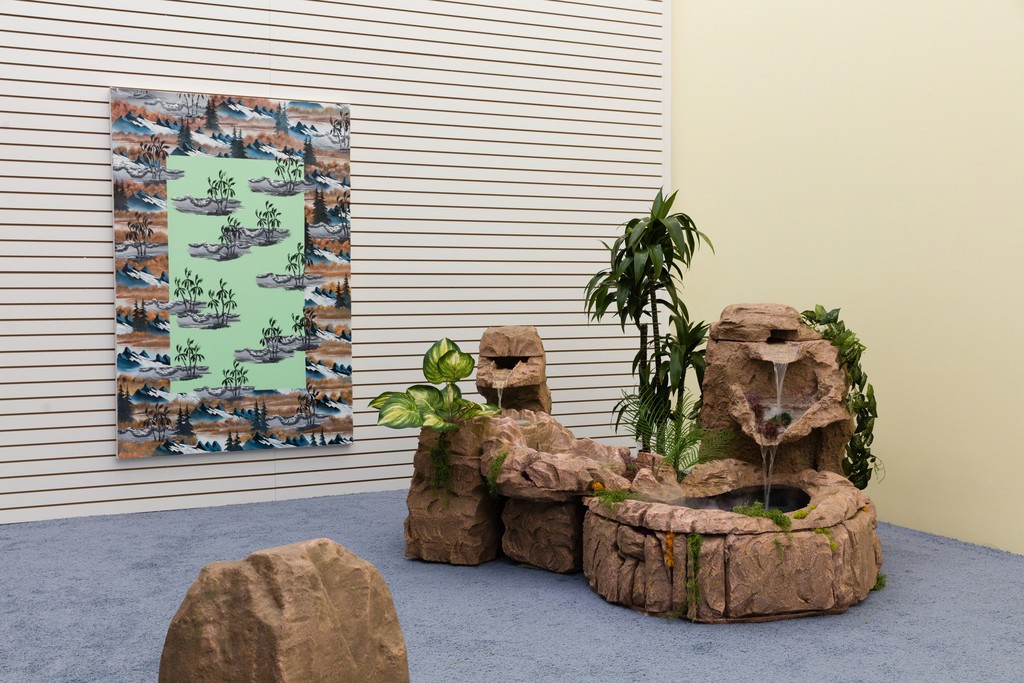 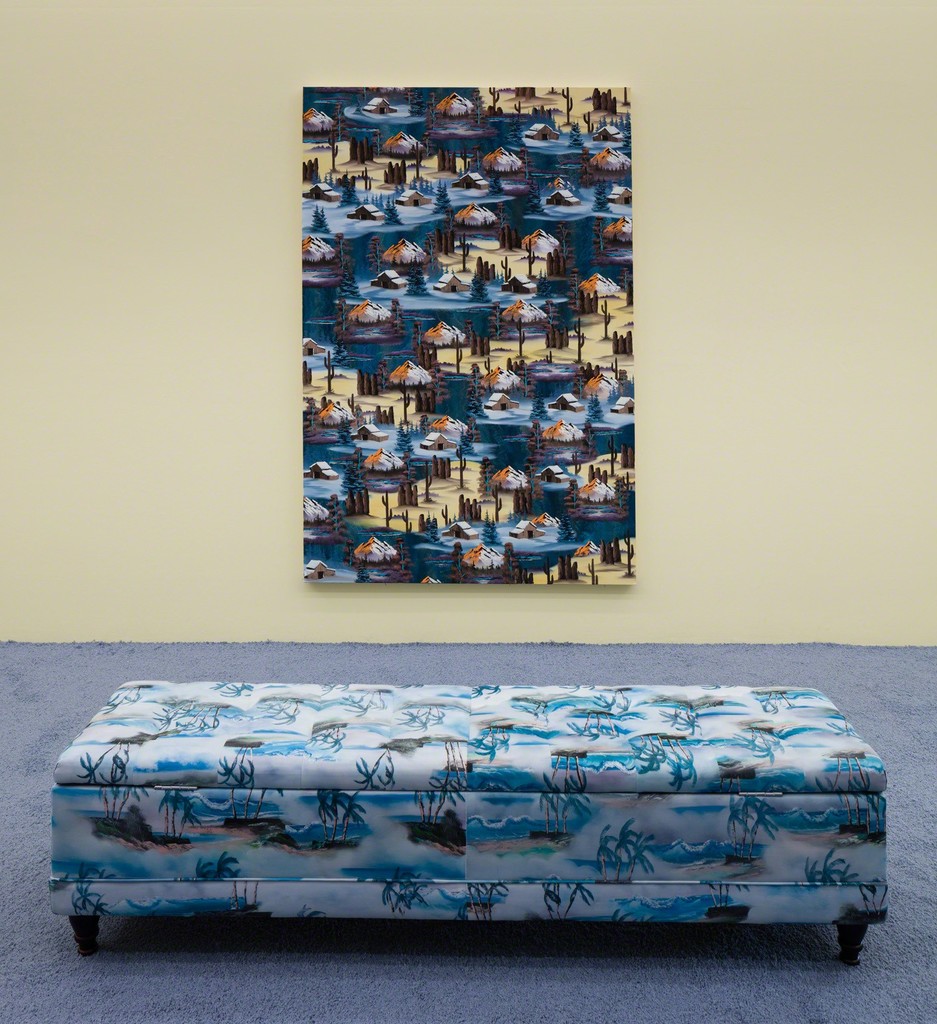 Anat Ebgi is pleased to announce Neil Raitt’s exhibition Misty Rock. The exhibition opens Saturday September 9, 6-8pm and is on view until October 21.

Room 191. Follow a winding stone path to the entrance of this cozy room. Inspired by Mother Nature…the serene misty rock walls, rich earth-tone accents and the soothing effects of a waterfall create the perfect atmosphere to relax. King bed with rock waterfall shower.

Greeted by a delicate soundscape, listening to the fountain is a great way to wash your daily worries away: close your eyes or lie down, and let the unnatural sounds permeate your mind. Make your way to the Magic Tree portal and become a participant within the environment— a passageway into the paintings and the space they’ve absorbed. It is a definite destination for those who love a little fantasy in life. A little bit tawdry, a whole lot of fun.

Named for a room in at the Madonna Inn in San Luis Obispo, Neil Raitt’s second exhibition with the gallery transforms the space into a resplendent tableau. In Raitt’s newest compositions, his works have begun to dissolve away the edges, undermining senses of border and framing devices. Raitt’s circuitous compositions have eschewed their places on the canvas— expanding across the walls and onto the set like pieces dotting the environment.

In refining the language and expanding the vernacular of his craft, Raitt’s paintings-cum-installation proposes a new Romanticism. The sublime grows palpable yet skewed with its thrift store slatted walls and natural features embracing their artifice. The human-sized manifestation of his painted pines, mountains, and serene waterfalls lush with silk foliage merge the world of the canvases with the world they inhabit.

Neil Raitt (b. 1986, Leicester, UK) lives and works in Los Angeles and London. Raitt received his MA from the Royal College of Art, London in 2013. Raitt’s work has been exhibited at public and private institutions including the Centre d’art contemporain La Halle des bouchers, Vienne; Villa Du Parc centre d’art contemporain, Annemasse; the DePaul University Art Museum, Chicago; and the Goss-Michael Foundation, Dallas. He was the is the recipient of the Northern Trust Acquisition Prize, 2016 and the Catlin Art Prize, 2014. Recent exhibitions include solo exhibitions with Nicelle Beauchene, NY and Mon Cheri, Brussels. Raitt will have an upcoming solo with Galerie Chez Valentin, Paris.